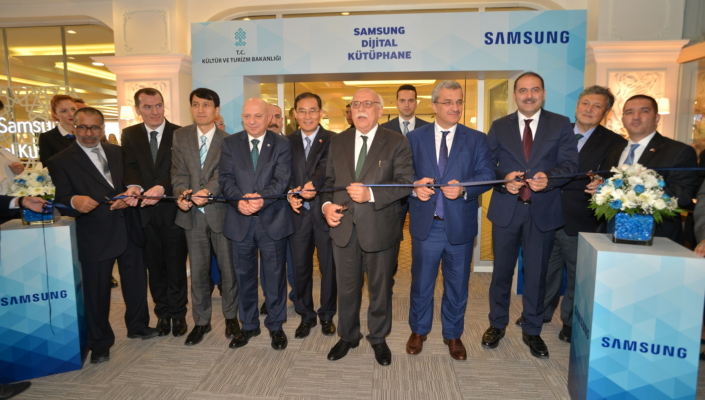 Samsung Electronics Turkey today announced the opening of the Samsung Digital Library, which offers free digital access to the valuable works retained in the archive of the National Library of Turkey, as well as contemporary e-publications. This project was realized in cooperation with the National Library with a total investment of 500,000 USD. With this project cultural heritage will be made freely available to the public, and will be passed down to the future generations.

The opening ceremony was hosted by Turkish Minister of Culture and Tourism Nabi Avcı and Director of Public Sector & External Affairs and Strategy at Samsung Electronics Turkey Dr. Erdem Erkul. During the ceremony, Korean Ambassador to Turkey Yun-soo Cho, President of the Information and Communication Technologies Authority Dr. Ömer Fatih Sayan and Turkish National Library President Zülfi Toman made speeches to underline the importance of the project.

The Samsung Digital Library stands out as the most comprehensive cultural public-private sector cooperation project in its field. As a result of the project, the rich archive of the National Library, which contains some 27,000 hand-written works in Ottoman Turkish, Persian and Arabic, stamp collections, film archives and phonograph records, can now be accessed freely and easily. The project will further give researchers free access to international academic papers.

With the renewal of ground floor hall of the National Library, a space was created for “Samsung Digital Library” with a capacity of 86 people. The hall has been equipped with Samsung tablets, notebooks, wireless printers, video walls and screens, creating a comfortable and fully equipped setting for the comfort of researchers.

Digitalization is key for Turkey’s 2023 goals

“We continue to use the technology and innovation of Samsung in projects that create value for society and we realize that digitalization is a critical part of Turkey’s goals for 2023,” said Dr. Erkul. “Because of Turkey’s cultural richness, we wanted to contribute to digitalization in the area of culture, thus breaking a new ground in Turkey. Following this project with the National Library of Turkey, Turkish people will be able to embrace their national values digitally at National Library.”

Turkish National Library President Zülfi Toman underlined the lirary’s mission to contribute directly to Turkish culture, science, literature and social life. “We believe that the digital transformation is extremely important and we worked very hard to digitalize the millions of documents found in the National Library, which is considered to be a national archive, a museum and a research center, because we know that only technology-driven projects can become prestigious on national and international platforms.”

“To give the Turkish public free and easy access to all of these important documents, we chose to collaborate with Samsung. Through this collaboration, we aim to open the National Library once again as an attraction center, and to increase the number of visitors. We believe that this project will help Turkish culture to be better understood in the world,” said Toman.

Millions of works now added to the Samsung Digital Library

Visitors to the Samsung Digital Library, which is located within the National Library, can access the following works freely: