[Innovation Feature Part 2] Samsung Opening up to Startups and Partners

As part of Samsung’s efforts to lead in emergent, the company has established two major operations, SSIC and Samsung NEXT, in Menlo Park, San Jose and Mountain View, respectively. While SSIC focuses on the development of core technologies and components and Samsung NEXT into software and services, their driving approach is similar: openness and agility. With a series of transformative successes from both units, Samsung, throughout the organization, has taken notice of the effectiveness of this approach with traditional businesses from mobile to home entertainment benefiting from the wellspring in innovation.

“There is the perception that what we are doing at Samsung NEXT and SSIC is untraditional approach to the core culture of Samsung, but from my perception, that couldn’t be further from the truth,” said Jacopo Lenzi, who heads business development and M&A at Samsung NEXT. “Samsung is a company that has an amazing history of innovation, of breaking the rules and reinventing itself constantly. This is simply the next chapter in that.”

To understand SSIC as a typical funding vehicle is only a partial picture. Gaining access to the resources of a technology giant such as Samsung is a huge boon for startups, and when SSIC determines to invest in a company, it does so with strategic reciprocity in mind: how will this investment contribute real value, particularly in open innovation, to Samsung at-large?

SCF’s lean team of just 10 people is strict in its approach. Each year, the team meetswith 1,500 startups , but selects only 100 for a second meeting, and then 15-20 businesses for ultimate funding. When it comes to choosing which startups to invest in, the business approach of the SCF team has been developed with deliberate intent and is spreading enthusiasm for its effectiveness.

Promoting collaboration makes up the largest proportion of SCF’s investment decisions. It’s linked clearly to the ethos around open innovation – the initiative to identify and grow the technologies and infrastructure of the future. Another key reason behind an SCF investment is to establish a toehold in a company, to find out its way of working and the competency of its leadership before an acquisition takes place. Finally, SCF also decides to invest in order to learn about a new, growing area, , such as AI. SCF might not work with the company immediately, but it might invest so that it can learn about the sector, the technology driving it and be in a leading position to work with the company in the future.

Chandran provides an illustration from a current project: “We’re investing in a company at the moment that does proteomics; technology that has the ability to measure thousands of proteins in the blood with high accuracy. If you can do that, you can tell when there are early signs of cancer. It’s possible that there may be opportunities if the company gets productized with a chip, as we’re the world’s largest chip company. We can’t work with the company today, but we may be able to in the future and when they are ready, we will be first in line.”

When it comes to focus areas, SSIC has the big picture in mind. “We’ve chosen five strategic technology domains in response to core questions: how does Samsung best become a fast leader, and how do we most aerodynamically achieve enormous growth?” said Chris Byrne, Head of IP Strategy at SSIC.

Described by Byrne as “working together like the five fingers of the hand,” the strategic technology domains are not distinct, but interactive, with one enabling the other: 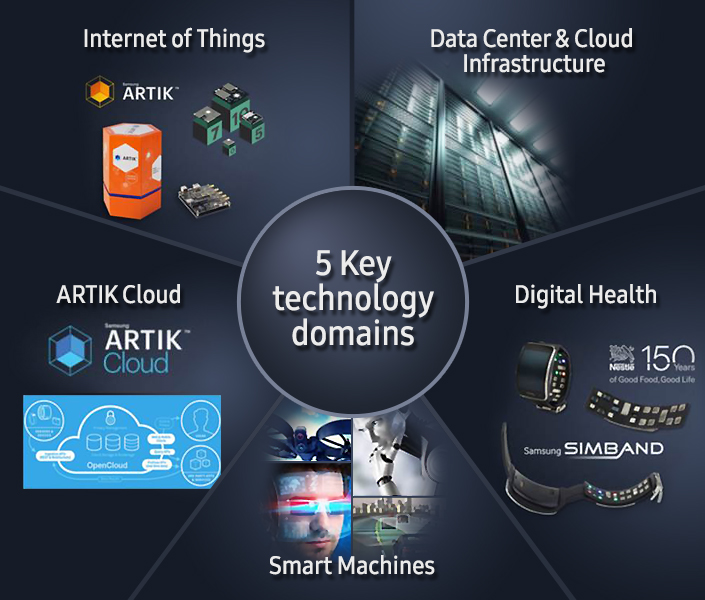 To elaborate on how these domains are meant to interact, Byrne provides an example, “You could be wearing a smart watch, and it detects something in your biology, which it then sends to be analyzed in the cloud as well as interact with other connected devices — an IoT phenomenon. Throughout this process, privacy and security provide the ultimate assurance and protection.”

Based on its strategic technology domains, the SSIC team has made several key moves which have already paid off to the larger Samsung ecosystem. For instance, SSIC created a partnership with Imec, a Belgian microelectronics company specializing in wearables, which soon was transitioned into Simband, an open developer platform for creating wearable health applications. SSIC is also currently working with Nestle to look at the science behind the food we eat to investigate ways of giving better recommendations for how we can be healthier—just another example of open innovation, with two leading companies in their respective fields working together for the greater good.

Samsung NEXT, and the Evolution of Samsung into a Comprehensive Tech Company

The Samsung NEXT team has deep roots in entrepreneurship. This stems from the leadership team’s collective 80+ years of first-hand experience in building, growing and scaling startups. The company’s intimate knowledge and drive to innovate through software and services startups is core to its mission: to help Samsung expand as a comprehensive technology company, beyond the proposition it’s consumers have traditionally known.

“Samsung has built itself as an incredible hardware company with great work being done in the software and services side, but the DNA and way it approaches its work is very much from its hardware core,” said Jacopo Lenzi, senior vice president at Samsung NEXT. “At NEXT, our mission is to co-drive the evolution of Samsung from a hardware manufacturer to a comprehensive tech company that ultimately is focused on delivering experiences and solutions for consumers, beyond devices.”

While many other tech companies in the valley may have disparate incubation, investments and acquisitions efforts that work independently to one another, Samsung NEXT deliberately eliminates these siloes and houses all of their functions under one organization. This unique approach gives early-stage software and services startups the opportunity to work with Samsung at any step in their journey and also allows NEXT to partner with entrepreneurs throughout the entire lifecycle of their startup, from idea to scale.

“If our Ventures investment group sees a startup that has a talented product and team, but may be a bit too early in development and haven’t quite found product-market fit, they may pass the company along to our Start team for an opportunity for that group to invest in the team at the incubation level.” said Lenzi. “This level-agnostic approach gives us the best opportunity to work with great entrepreneurs and provide Samsung’s rich resources to as many strong startups as we can. It’s our way of being able to utilize the right levers and tools to maximize achieving results for Samsung and startups everywhere.”

Samsung NEXT makes investments through the Samsung NEXT Fund, a USD 150 million vehicle for empowering early stage companies with capital. The Fund seeks to invest in startups—both their talented teams and ideas–that align with Samsung’s focus areas and objectives. Post investment, the NEXT team works closely with these startups to create partnerships that deliver strategic returns to Samsung and big financial returns to entrepreneurs and investors. Investments support Samsung’s current business initiatives, but more importantly, have the potential to create new, large business opportunities.

“Given the scope of Samsung’s interests, we invest in a variety of areas. We’re especially focused on AI, IoT, AR/VR, security, mobility and health,” said Brendon Kim, Managing Director of Samsung NEXT Ventures. “But, more than any specific tech category, we look for startups that have strong teams and disruptive solutions – startups where we can accelerate success and help us chart Samsung’s future.”

A majority of Samsung NEXT’s investments include companies based in the US, but the company has also invested in startups in Tel Aviv and are looking into Asia and Europe.

“Great ideas and entrepreneurs are definitely not limited to the US. They are found in all corners of the world and we are committed to finding and empowering great startups wherever they are,” said Kim.

In the case of acquisitions, Samsung NEXT will not only lead the purchase of a startup, but also the integration ofits management team and employees. Therefore, in the process of evaluating whether a company is a good fit for Samsung, Samsung NEXT needs to ascertain how well its product, people and processes will integrate into the larger fold.

One example of how the team at Samsung NEXT was able to do this successfully is with the acquisition of Loop Pay in 2015. Samsung NEXT identified that legacy systems were an obstacle in getting into the mobile payments market, so they found a company addressing this issue in a unique and scalable way. But the first step was to look for the right partner they could work with to build organically. It started with an investment before progressing through to a relationship with Samsung’s mobile business.

Lenzi explains, “In the case of Loop Pay, we didn’t immediately go for the acquisition. We didn’t see it as the ideal way to create a relationship with their company initially. It’s always about organically getting to the right place and solving the problem in the way that makes sense for both Samsung and the startup. It requires very close work with the startup, business units and our internal teams. That can only happen when all the right people are in one place and share a similar vision.”

Loop Pay became Samsung Pay and is now being rolled out around the world.

In other notable examples, late last year, Samsung NEXT spearheaded the acquisition of Viv Labs, the open AI platform, intended as a bold move to position Samsung firmly in AI and deliver down the line. In 2016, Samsung NEXT drove the acquisition of cloud-computing company Joyent to grow Samsung’s cloud-based services and capabilities for smartphones and internet-connected devices.

These acquisitions as Lenzi explains should not be viewed in isolated verticals, but as part of the comprehensive evolution Samsung NEXT is seeking to effect throughout Samsung:

“In the transformation of Samsung to a comprehensive tech company, we have the opportunity to assemble and ultimately scale all the components of a software and services consumer stack. When looking at Viv, Joyent and Loop Pay, they may seem like three disparate dots on a very large map. It’s difficult to understand how they connect. But in thinking about the consumer experiences Samsung can deliver, these various acquisitions start to paint an amazing and surprising pointillistic picture. It’s Samsung NEXT’s job to execute against that vision.”

In the final part of this series, we’ll look at how Samsung plans to continue to spread the spirit of change being nurtured in Silicon Valley throughout its entire organization.