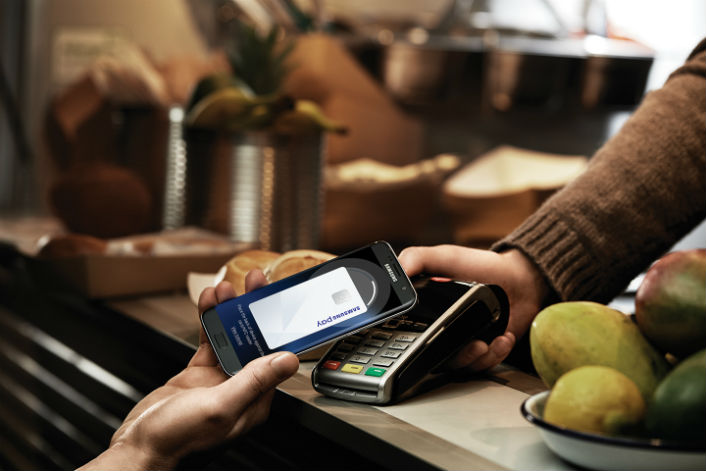 Working with the largest POS makers, Samsung Pay is driving toward the goal of universal merchant acceptance, which is critical to consumer adoption. Samsung Pay uses both Near Field Communication (NFC) and Magnetic Secure Transmission (MST). MST is Samsung’s innovative technology that delivers secure transactions for new EMV chip and NFC terminals, as well as traditional, magnetic strip terminals, enabling consumers to use Samsung Pay almost anywhere they can swipe or tap a card. The announced partnerships will help systematically test and validate the different POS systems in the field to ensure maximum compatibility and universal acceptance for Samsung Pay.

Using Samsung Pay is faster than using a chip card, and safer than swiping a mag stripe card because tokenization protects against copy and reuse at even mag-stripe-only terminals.  With tokenization of MST and NFC transactions Merchants receive Card Present rates with no liability shift, regardless of what type of POS terminals they use.

“Consumers love Samsung Pay because it is fast, safe, and so widely accepted by merchants everywhere” said Sang Ahn, Chief Commercial Officer Samsung Pay, Inc. “We are excited to be working with our POS partners to accelerate the adoption of mobile payments and bring greater innovation into the marketplace.”

Samsung Pay, a mobile wallet service from Samsung Electronics, is simple, safe and works virtually anywhere plastic cards are accepted. Samsung Pay supports all major payment networks and many of the country’s major financial institutions, and it continues to expand its partnership ecosystem*.  Click here for the full list of financial partners that support Samsung Pay.