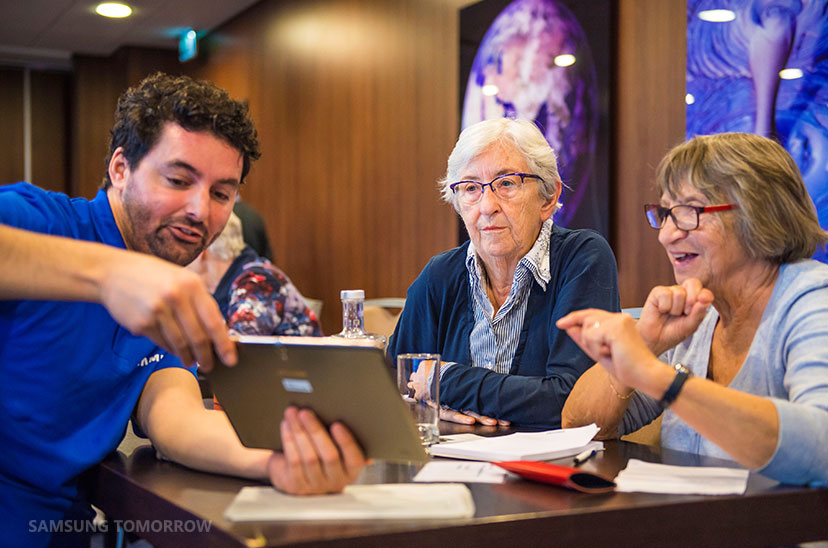 Two years ago, Joris Verhoeff was working in the Customer Service Department at Samsung Electronics Benelux (SEBN), where he was constantly receiving phone calls from elderly customers who were asking for help in getting online and using various online services.

“Many of the seniors wanted to make video calls to their children and grandchildren. Some of them wanted to do online banking,” said Joris, who is now a sales manager at SEBN. “There are many things technology can do to simplify their lives, but it seemed like the seniors were being left behind.”

So, Verhoeff approached his director about starting a volunteer training program, called Senior Training Days, to help seniors go online and integrate the likes of Facebook, Google and Skype into their daily lives.

Having initially begun in October 2013 with 10 SEBN volunteers and 20 seniors, the Senior Training Days have since gained significant traction and popularity. So far, more than 400 SEBN volunteers have traveled to 17 cities across the Netherlands and Belgium to train over 1,000 seniors. In 2014 alone, 75% of SEBN employees participated, logging over 1,600 training hours. The numbers continue to grow.

“The Belgian government wants to diminish the digital skills gap of senior citizens,” said Belgian Federal Vice Prime Minister Alexander de Croo, when he met with SEBN officials in Belgium. “It is important for senior citizens to get connected and stay connected. I would like to thank Samsung for this initiative, and I hope other companies will soon follow suit.”

During the training sessions, the 270 or so seniors were divided into groups of three according to their existing knowhow, and each group was led by one SEBN volunteer. The 3:1 student-to-teacher ratio allowed the volunteers to give personal attention to each senior, assessing the exact needs of each senior and accordingly tailoring the day’s lessons.

Each day, the seniors were trained in three overarching topics: how to use mobile devices (e.g. smartphones, tablets), how to use the internet (e.g. social media, e-mail, web browsing, VoIP, online banking) and security/privacy issues they should be aware of when going online. Prior to participating in the Senior Training Days, each SEBN volunteer is given training on how to teach these topics using a training manual.

“I’ve always wanted to Skype with my son who lives abroad, but I never knew how that worked,” said Daniel, 78, from Ghent. “Now, I finally know how it’s done and luckily it’s very easy. When I go home tonight, I’m going to try it out on my tablet.”

The day-long program has been complemented by the Big Senior Training Days, which are more comprehensive four-day sessions held annually in both countries. The first annual event took place in the Netherlands in November 2014, which involved around 400 seniors and 200 SEBN volunteers.

The Senior Training Days have been jointly organized with leading national senior citizen groups, namely ANBO in the Netherlands and Vlaamse Actieve Senioren (VLAS) in Belgium, which have over 100,000 and 30,000 members, respectively.

“We are very happy to organize Senior Training Days together with Samsung,” said Liane den Haan, the CEO of ANBO. “It is important to get seniors digitally connected with their children and grandchildren. Also, their improved digital skills can enable them to live more independently and hopefully prepare them to make use of digital health solutions in the near future.”