Samsung Electronics works to make products that are accessible to everyone. The voice guide function on Samsung’s Smart TVs are a testament to such efforts

The simple things we do every day, such as watching TV, are often taken for granted. But for those who are blind or visually impaired, the act of navigating through TV menus and channels can in fact be no small task.  Even upon reaching a desired channel, finding something to watch that comes with audio description presents a whole fresh set of impediments to readily enjoying entertainment.

But fortunately, things are changing so that visually impaired people can enjoy their favorite entertainment in the comfort of their homes. Some TV stations, such as Swiss Television (SRF), already offer content with audio description for visually impaired and blind people. Furthermore, Samsung Electronics is cooperating with the Swiss Association for the Blind and Visually Impaired (SBV) to showcase how Smart TVs can be operated easily and autonomously by visually impaired individuals.

In this interview, Secretary General Kannarath Meystre and Head of Innovation and Technology Luciano Butera of SBV explain the influence of modern technology on their everyday lives. 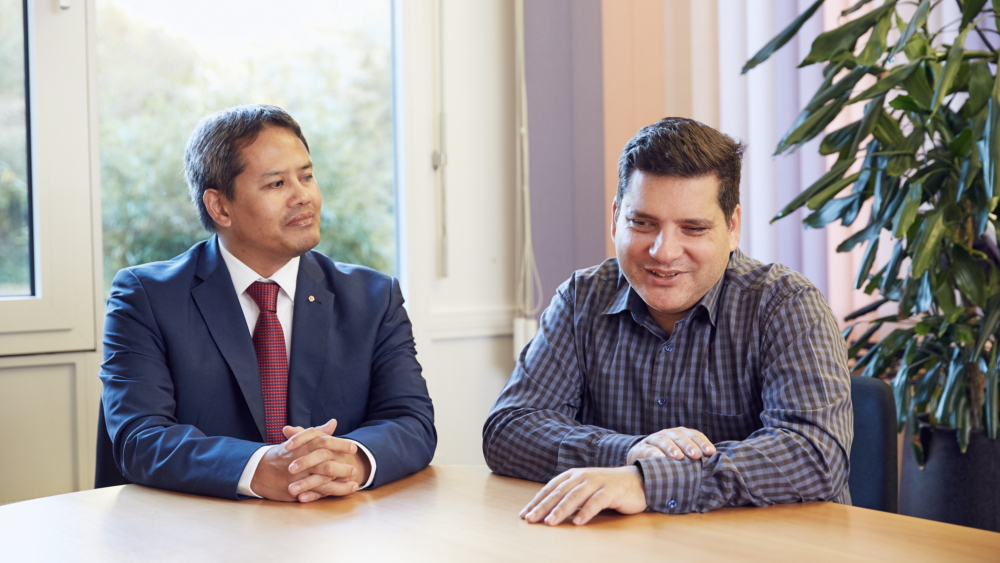 (left) Kannarath Meystre, Secretary General, Swiss Association for the Blind and Visually Impaired (SBV) and Luciano Butera, Head of Innovation and Technology (SBV) sat down with Samsung Electronics to discuss the roles of modern technology in their lives

Q. How has technological progress shaped the everyday lives of visually impaired people?

Meystre: Digitization has modernized many professions that could previously be accessed easily by visually impaired or blind people. For example, the profession of the voice assistant telephone operator no longer exists. Since many visual tasks have been added to job roles, such as operating IT systems or working at reception, the employment choices for visually impaired people have become more complex. In order to show how a visually impaired person can still be a fully-fledged employee with the right tools, we educate employers and offer job coaching to employees. Of course, digitization has also simplified many things.

Butera: Exactly, new technologies always hold opportunities as well as hindrances. The introduction of smartphones is a good example: the disappearance of the keypad has made it impossible for blind and visually impaired people to use a mobile phone. But when so-called ‘screen readers’ were introduced in addition to the touch screen which read on-screen content aloud, this not only solved the problem, but suddenly offered a number of new possibilities with regard to the use of the internet and apps. To this end, we created the technology department at SBV about five years ago. One example of its innovations is with physical money. Since the tactile features of Swiss banknotes wear out over time, we have programmed an app that recognizes and indicates the value of money. 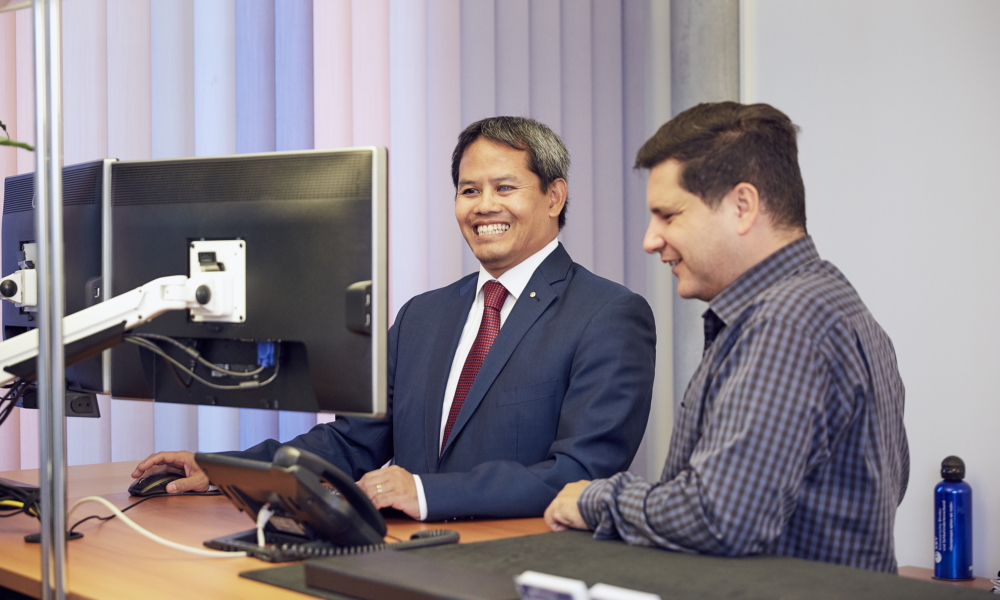 (left) Kannarath Meystre and Luciano Butera demonstrate the use of screen readers, which greatly improved access to technology for those with visual impairments

Q. Where in your everyday life are the technical barriers most noticeable?

Butera: Public transport is certainly the biggest issue. In recent years, for example, many aids have been developed on smartphones to enable people to use public transport systems independently. At the same time, ticket machines equipped exclusively with touchscreens cannot be operated by us. The ticket must therefore have been purchased through the app. If this does not work for some reason, the whole process becomes difficult. With this being said, a lot has improved in public transport. For example, all stations and exit directions on trains are now announced.

Meystre: Even if such apps can bring great advantages, digital progress cannot and must not replace human interaction. Despite all the enthusiasm for new technology, care must be taken to ensure that digitization does not lead to social isolation. This would clearly undermine the goal of properly integration visually impaired and blind people into modern society.

Butera: Another area in which there is still much to do is the living area. In particular, since the latest kitchen appliances like cookers, ovens and microwave ovens no longer have buttons, we have to be creative in order to be able to operate them. The ever-more complex menus and the sensor-only navigation fields make the simplest of operations a real challenge for us. Nowadays it is possible to equip many things with special accessories, but it is our aim to ensure that the development of new devices going forward also includes barrier-free access for people with disabilities right from the start. 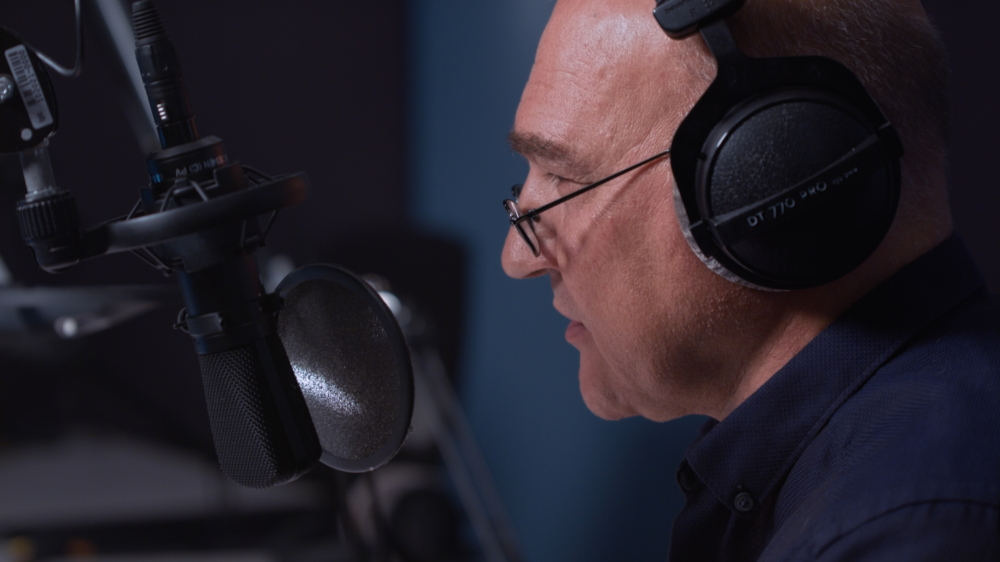 A voiceover artist records voice guides in a studio

Q. Just like the voice guide on the new Samsung Smart TVs.

Meystre: That’s right. This collaboration with Samsung is exemplary of what we’re working towards. While it used to be easy to operate a simple TV with a simple remote control, the complexity of Smart TVs has created new obstacles. The fact that Samsung recognized this and sought our cooperation to solve this is testament to a genuine pioneering spirit and a sincere appreciation of us. We are very proud to be able to make a contribution to barrier-free television for blind and visually impaired people with this partnership.

Butera: The channel navigation that is read out loud enables us to watch television in a much more enjoyable way. Content with audio description has been available for some time, but only with this voice guide that reads out the schedule and current program options is it really possible for us to explore television without barriers. I am also sure that this new standard will be a great relief for others as well as the blind and visually impaired, such as older individuals with diminishing eyesight who previously required special aids to enjoy television. Furthermore, on a psychological level, it really is much more pleasant to encounter a TV that comes with the necessary adaptations built in rather than having to go to the lengths of custom-fitting a TV with specially designed technology.