Radio frequency (RF) radiation (sometimes referred to as “cell phone radiation”) represents one of the most common environmental influences, about which anxiety and speculation are quickly spreading. Amid these growing concerns, Samsung Electronics has been working in earnest to design its smartphone and wearable technology so that RF exposure is minimized as much as possible.

By establishing internal Specific Absorption Rate (SAR) standards, enhancing antenna design and maintaining close collaboration between teams during product development stages, the company has been able to produce a number of mobile devices with some of the lowest SAR levels on the market.

In the first installment of the “Strides in Stewardship” series, we will take a closer look at some of the initiatives taken by Samsung to achieve this accomplishment.

So What Exactly Is SAR?

When electromagnetic waves are received and transmitted by a wireless device such as a smartphone, some of the RF energy is lost to the surrounding environment and can be absorbed by the person handling the product. SAR is the rate at which human biological tissues – such as those in the body and head – absorb these stray RF signals from the source being measured.

SAR provides a straightforward method for measuring the RF exposure characteristics of mobile devices to ensure that they are within the safety guidelines based on standards that have been developed by independent scientific organizations through exhaustive evaluation of scientific studies.

In the US, the Federal Communications Commission (FCC) requires that all phones sold have an SAR level at or below 1.6 watts per kilogram (W/kg) averaged over 1 gram of actual tissue – a guideline based upon the standards developed by IEEE, NCRP and input from other federal agencies. Similarly, Japan, China and most European nations follow the guidelines specified by the International Commission on Non-Ionizing Radiation Protection (ICNIRP), which sets the SAR limit at 2 W/kg averaged over 10 grams of actual tissue.

* The SAR levels indicated in this chart are based on US devices. SAR levels may vary by model and region. For more information, visit: https://www.samsung.com/sar/

Samsung is so committed to ensuring the safety of its users that its internal maximum SAR level is half of those fixed by the previously mentioned international standards. This is emphasized in the chart above, which lists the company’s smartphones launched in 2017 and their respective SAR levels. These levels, particularly the Head SAR levels, are some of the lowest on the market today.

To achieve the lowest SAR levels possible, Samsung has dedicated many of its resources to research and development, particularly in the area of antenna design. That’s because RF waves from mobile phones are emitted from the antenna, and the closer the antenna is to body tissue, the greater a person’s exposure to RF energy is expected to be.

Taking the Lead in Antenna Innovation

In 2006, Samsung adopted an innovative antenna system to enhance device safety by maintaining significantly lower SAR levels compared to other products while simultaneously improving overall RF performance. One way the company has been successful in achieving this goal is by making antenna location a priority in its smartphone design.

“Antenna placement is incredibly important. A one-millimeter difference in location can reduce the SAR level by a large margin,” noted Yoonjae Lee, Antenna Group, Mobile R&D Office, Samsung Electronics. “The location of the antenna has to be decided during the product planning stage, as it’s difficult to change its placement later on.”

Over the past few years, Samsung has focused its efforts on embedding the TX antennas – the antennas that are most closely associated with higher SAR rates – at the bottom of the phone body. In doing so, cell phone radiation is directed away from the head of the user, where the phone is typically held during phone calls and the part of the body where RF energy poses the biggest health concerns. 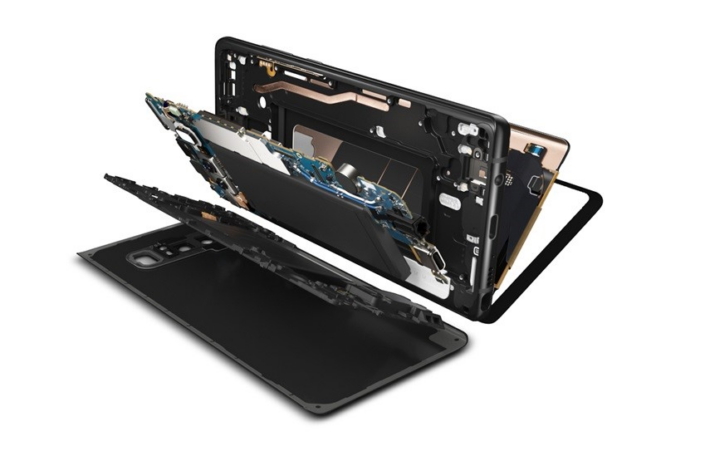 With today’s devices, the external metal frames of the phone body become the antenna itself. Therefore, antenna placement and general phone design have to be considered simultaneously, which requires the close cooperation of multiple teams. To facilitate this process, Samsung conducts a number of simulations using proprietary software and tools to determine the best location for the antenna based on the phone’s design, without having to use a physical prototype of the device.

In addition to the placement of the antenna, certain device materials and even chemicals in the product’s color coating can affect SAR levels as well as the performance of the antenna, further complicating the product development process. As a result, Samsung’s Antenna Group works closely with different design teams, including the Color, Material and Finish (CMF) team.

“When the CMF team proposes the use of a new material – which was the case with the Galaxy Note8 – the design team commissions a detailed substance analysis of the material,” said Lee. “The Antenna Group then conducts various tests to determine all the possible ways the material might influence the behavior of the antenna.”

As product development advances, Samsung tests SAR levels at every stage, considering the highest output when the body of the device and the head of the user are in close contact. Should the anticipated SAR levels of a product come out higher than the company’s standards during any stage of product development, the process is halted and modifications are made until the SAR levels are satisfactory. 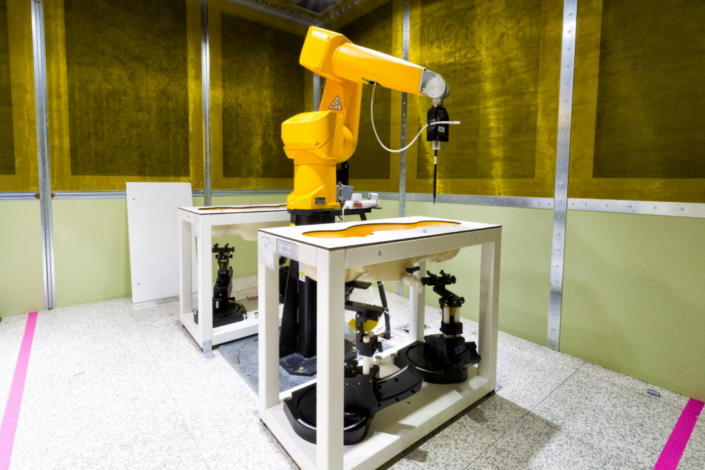 To test the SAR level of a mobile device, Samsung conducts 2D and 3D scans using a special liquid-form material that has similar permittivity and conductivity levels as those of human body tissue. Measurements are made at different frequencies representing the frequency bands at which the device can transmit.

Samsung has also applied its antenna know-how to its wearable devices, which boast SAR levels that are significantly lower than those of the products of the company’s competitors.

“Many other wearable manufacturers are struggling with SAR levels. Even if they try to utilize the appropriate materials and placement for the antenna, they lack relevant technology patents,” said Inyoung Lee, Antenna Group, Mobile R&D Office, Samsung Electronics. “But Samsung’s antenna design is completely different from those of other brands. As a result, we are able to sustain low SAR levels while ensuring optimal antenna performance.”

In an effort to maintain its momentum in antenna innovation going forward, Samsung earlier this year established the Antenna Design Studio, an initiative that the company hopes will help systemize the antenna design stage by integrating its many different parts – including software simulations and hardware testing – to minimize repetitive stages and determine the most efficient performance.

The company has also established an internal task force to determine which fields of expertise are needed to enhance antenna design (and thus continue to lower SAR levels), and are working consistently to grow its workforce to include highly trained antenna technicians and material experts.

In doing so, the company strives to continue to lead the smartphone industry through antenna development, all the while producing mobile devices with the lowest SAR levels possible.