[In-Depth Look] What’s Inside the Galaxy S8 and S8+

With its bezel-less Infinity Display, increased performance capabilities, and enhanced cameras and biometric security, the Galaxy S8 is a device that beautifully merges form and function – one that is the result of the latest breakthroughs in engineering. Take a closer look at the pieces and parts that power the innovations of Samsung’s latest Galaxy smartphones in the teardown below. 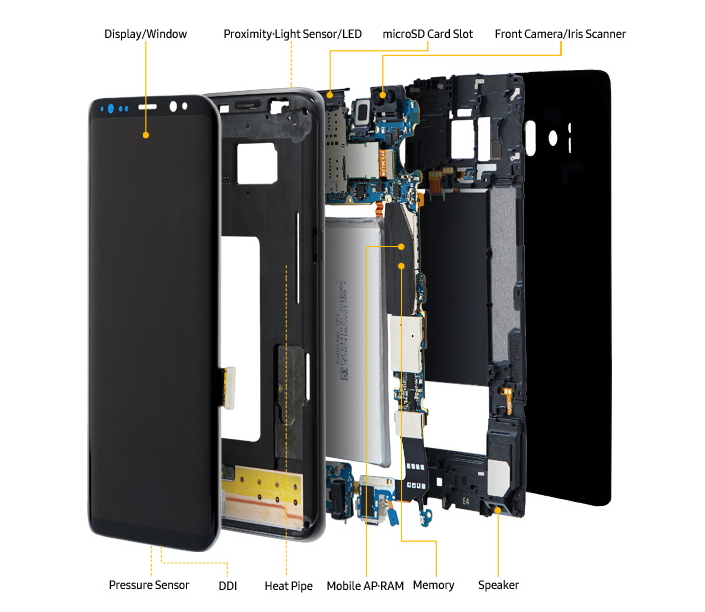 Offering an incredibly immersive visual experience, the curved, Mobile HDR Premium-certified OLED display of the Galaxy S8 and S8+ has been recognized as the best smartphone screen on the market. With an 18.5:9-ratio screen that fills 80 percent of the entire front of the device, the display makes watching video content a truly cinematic event, and enhances multitasking to make working on the go more efficient than ever.

The smartphone is equipped with Gorilla® Glass 5—which is up to 1.8 times stronger than Gorilla® Glass 4—on both the front and back for enhanced durability.

The Display Driver IC (DDI) supports various image compression algorithms of major APs to reduce power consumption, all the while maintaining image quality. The DDI was moved from the top of the device to the bottom to allow for even smaller bezels on the smartphone’s display.

To add to the viewing experience, the device’s home key was installed under the display and utilizes a pressure sensor to respond in the same way a physical button would through haptic feedback.

To maximize screen space, the front camera was built into the phone’s upper bezel. The 8MP F1.7 smart autofocus camera is equipped with facial recognition technology so it can better recognize and track faces, even when the distance between the camera and the subjects in the photo is increased. The technology also adds convenience by allowing users to quickly unlock their smartphone by simply looking at the front of the device.

Embedded on a singular module with the front camera, the Iris Sensor (Detector) enables iris scanning, a method of biometric identification that uses mathematical pattern recognition of images of an individual’s iris to enhance security.

Packing powerful performance and connectivity, the Galaxy S8 and S8+ feature the industry’s first 10nm chip. The octa-core chip boosts the device’s CPU functionality and GPU performance by 10 and 21 percent respectively, while reducing battery consumption by a full 20 percent.

The Galaxy S8’s new PCB structure minimizes the gap between the AP—the hottest component of the device—and the heat pipes to ensure faster heat transference. This ensures that the smartphone can handle even the toughest of processing loads, such as those from graphics-intensive games, without overheating.

Incorporating a Hybrid SIM tray*, the Galaxy S8 can hold a microSD card for expanded storage up to 256GB of memory. Alternatively, it can hold a second SIM card so smartphone owners can use their everyday phone number for calls and texts, while reserving the second slot for data from a local SIM card when they travel, or for an additional phone number. 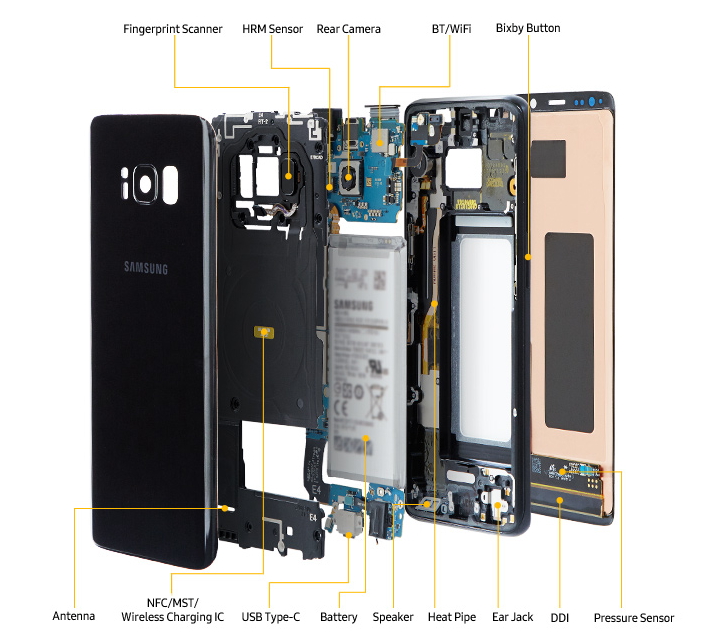 The phone’s 12MP F1.7 autofocus rear camera utilizes a Dual Pixel image sensor and multi-frame image processing technology to produce great photos in just about any lighting condition. It is also utilized by Bixby Vision, which makes it easier to search for images and information, shop online and even translate text. The camera itself is built into the back of the device in a way that minimizes protrusions, creating a sleek aesthetic.

The Galaxy S8’s touch-type fingerprint scanner allows for strengthened security and enhances the usability of mobile services such as Samsung Pay and Samsung Pass.

The heart rate sensor enables users to monitor their physical activity, which can be checked through the Samsung Health app.

The Galaxy S8 incorporates a designated button for Bixby just below the side key to allow for instant access and intuitive usability, without compromising the design of the device. With the new Bixby button, users can conveniently access Bixby and navigate through services and apps with simple voice, touch and text commands.

Samsung Pay has become the most widely accepted mobile payment service due to its unique combination of NFC and MST technologies, ensuring it works nearly anywhere that credit and debit cards are accepted.

The antennas located at the top and bottom of the device can handle a wide band of frequencies, so users can upload and download large amounts of data quickly. The Galaxy S8 is also the first smartphone to feature support for gigabit LTE (known as LTE Category 16) and gigabit Wi-Fi. This means that when wireless networks capable of supporting gigabit speeds reach consumers, the device will facilitate blazing fast downloads of up to 1 Gbps, regardless of file size.

The Galaxy S8 is the first phone on the market with Bluetooth 5 wireless connectivity, which offers twice the data transfer speed of the previous version, increases the capacity of data broadcasts by 800 percent and can cover four times more space.

The Galaxy S8 and S8+ feature a 3,000 mAh and a 3,500 mAh battery, respectively, that were designed to sustain their longevity and stability over the long term and specifically over hundreds of charging cycles. Furthermore, a rubber barrier was embedded to buffer shocks, further protecting the battery.

The Galaxy S8’s ports, including its USB Type-C charging terminal, were made with anticorrosive materials to ensure IP68 certification. This USB Type-C port also allows Samsung DeX to connect to DeX Station, a service that lets users use their smartphone like a desktop by providing a seamless, secure mobile to PC transition.

Located on the bottom of the device, the 3.5mm ear jack is appropriately situated for the high-performance, AKG-tuned earphones that are included with the Galaxy S8, and is also compatible with other earphones.