The Art of Curves on Samsung’s Products 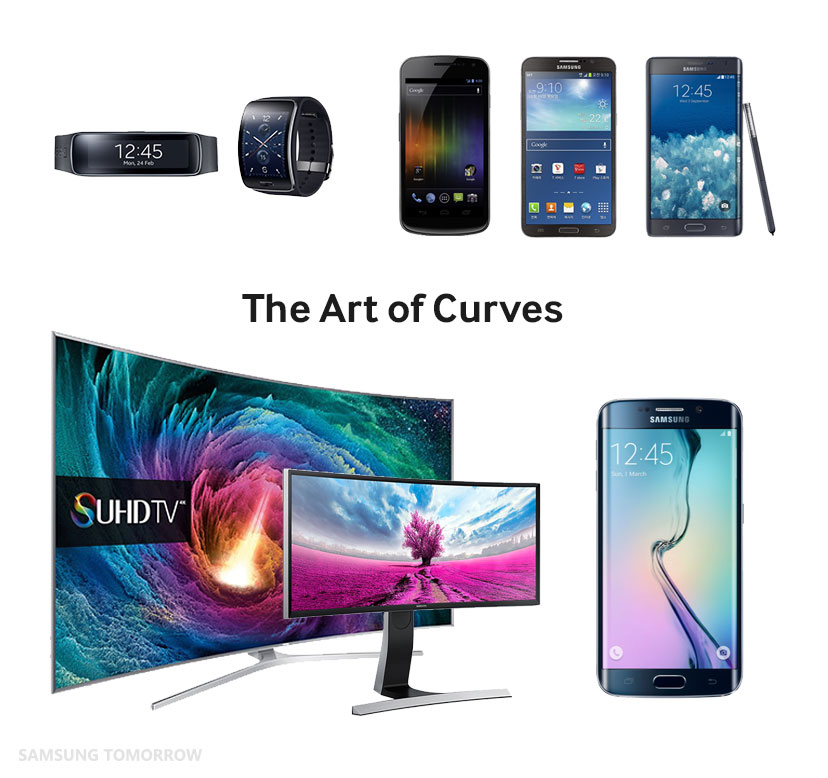 The technology behind Samsung’s curved display and glass materials has become one of the key components of the company’s design philosophy. The contoured lines are aesthetically beautiful and create more possibilities in functionality. Since the launch of the industry’s first smartphones with curved displays, Samsung has pushed the limits of technology to lead the way in revolutionizing how the world views information.

Released in 2013, the Galaxy Round was curved vertically. Because it resembles giwa (or traditional Korean roof tiles), it earned the nickname “Galaxy Giwa.” The curved glass of the 5.7-inch screen of the Galaxy Round has a soft curve which, with 400R and Sag 2.55mm specifications, improves grip. Additionally, when shaking the device while the screen is locked, an image of water flows across the screen, an impressive and visually appealing feature.

Galaxy Note Edge: Brand New UX
Samsung continued to release more products incorporating the use of curved glass, and as such, its technology consistently advanced. This was evident in October 2014, when the company released the Galaxy Note Edge, which featured the thinnest curved screen yet. It was the first product to introduce “Variable R” curved glass, meaning instead of having a single curve rate like its predecessors, there were multiple curvatures contained in the single 0.55t glass screen. The curved glass of the Galaxy Note Edge was available in 6.3R (minimum value) and Sag 5.56mm, demonstrating the considerable improvement of Samsung’s curved glass technology and would be the foundation for the creation of the dual edge screen of the Galaxy S6 edge.

Galaxy S6 edge: The Pinnacle of 3D Glass Technology
The unprecedented dual edge display of the Galaxy S6 edge is the most advanced 3D glass technology that exists today, and required extensive research and experiments by the device’s development staff. Though thinner with a 0.4t body, this seemingly indestructible device is stronger than any previous curved screen, with a higher curve rate than all other existing smart devices. Designed for both beauty and function, the Galaxy S6 edge pushes the boundaries of curved glass technology.

Gear Fit and Gear S: Curved for Better Fit
Samsung released its Gear Fit in April 2014, the company’s first attempt at introducing its distinctive design in wearable devices. Its contoured face and innovative design with a narrow 1.84 inch screen in 57.45R and Sag 8.0mm distinguished the Gear Fit from other wearables, making it both stylish and comfortable to wear. In November, Samsung released the Gear S, a wider version of the previous model. The wider 2-inch screen in 45.88R and Sag 8.0mmn allowed for greater usability, and impressed users with the preloaded S Health, a mobile application that tracks the progress and health status of the consumer. 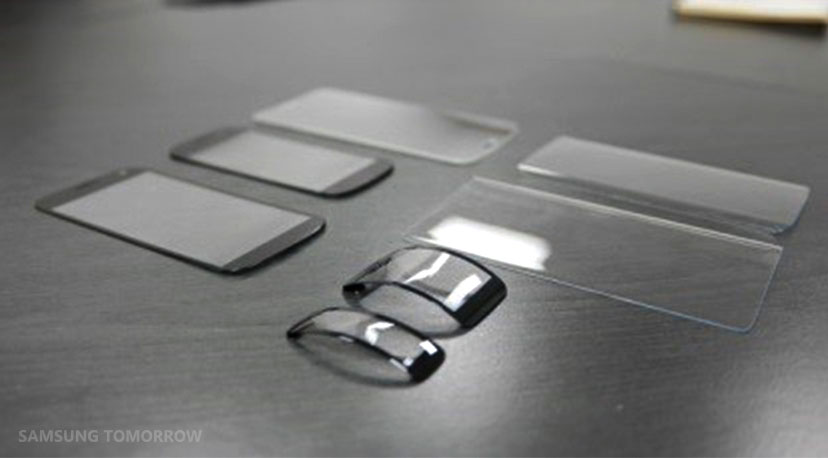 2D glass is flat on both sides. It can be found on the two oldest models of the Galaxy S and in most smartphones. It was followed by 2.5D glass, which was the beginning of curved displays. 2.5D glass has a convex or concave surface on only one side; the other side is flat. Nexus S and Galaxy Nexus are both examples of devices that use 2.5D glass. 3D glass is different because neither side is flat; as such, the technology for bending this glass required sophisticated engineering. To produce 3D glass, advanced thermoforming technology is applied to glass that must be as thin as it is strong. Samsung continues to improve its thermoforming technology by consistently creating new products.

The two measurements of curved glass are R value and Sag value. The R value represents the radius from any point. A single R is a perfect circle with a non-variable radius. A variable R is an ellipse and has a different value dependent on the point of measure. The technology to create a variable R is more advanced and Samsung introduced this technology with the Galaxy Note Edge.

The second value is the Sag rate. This measures the height from the top to bottom of a curve. The deeper the curve of any display, the more advanced the technology behind it.

While consumers all the world over have grown to favor smartphones with curved screens for the glass’ strength and stylish design, curved technology is not only limited to mobile devices. In fact, this very technology has created an entirely unique media viewing experience both at home and at the office.

Curved TVs: Gentle Viewing Immersion
Released last year, the curved TV has become known for its immersive properties. Its beautiful soft curve of 4200R minimizes the viewing distance from the center of the screen to the peripheral areas, reducing the need to repeatedly adjust focus. This feature exclusive to curved televisions results in less eye strain, particularly during action scenes.

Curved Monitors: Easier on the Eyes
Earlier this year, Samsung released a number of computer monitors with curved screens that, like curved TVs, lack display distortion and are much easier on the eyes than traditional monitors. While the monitors smaller than the 29 inch model have a 4000R curve, the 29 inch model and bigger varieties measure in at 3000R. Being the first company to introduce models with these specifications using its own technology is a remarkable achievement on Samsung’s part.

Beauty With Purpose
Curved glass is beautiful and complex. As curved technology evolves, the possibilities of design also grow. Samsung developers continue to think of ways to use these new technologies to make life easier and more aesthetically pleasing for everyone.