The Smartest Meeting Ever, Introducing the 2019 ‘Samsung Flip’

As needs for a smart meeting environment are increasing, there is growing interest in the 2019 Samsung Flip. The audience at the recent InfoComm 2019 had a chance to try the product, and when they experienced it, they were amazed at the speed of the pen and texture of the brush as well as how real it felt to use this digital white board. Samsung Newsroom summarizes the 2019 Samsung Flip with various functions for a digital meeting environment in three keywords: pen, convenience and design. 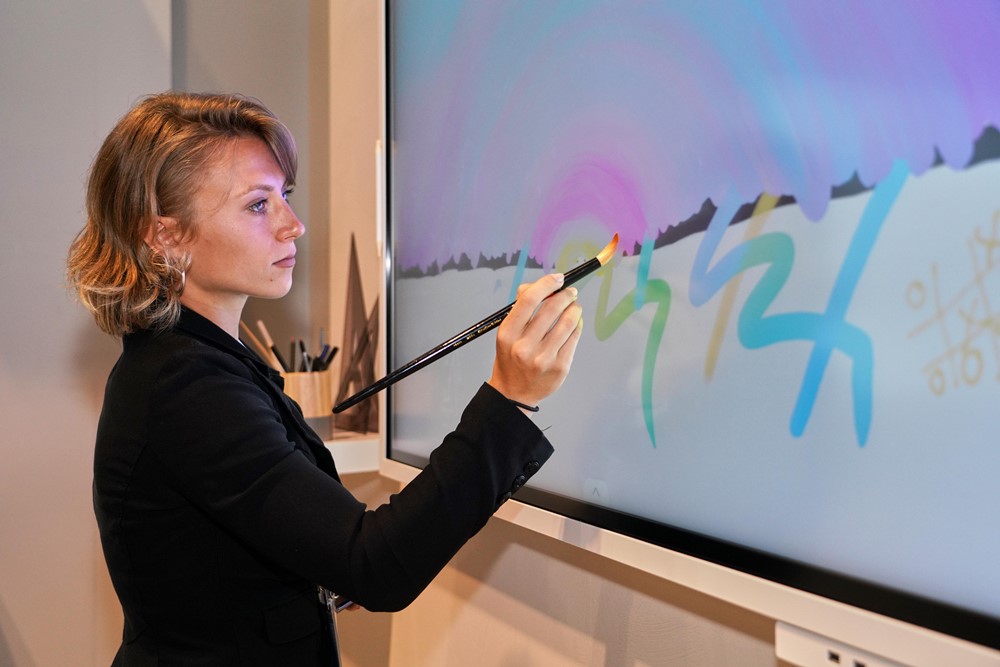 Pen: The Connection Between a Display and its User

The 2019 Samsung Flip’s extraordinary writing recognition technology is one of the key elements of improvement. The product provides a passive pen without electronic components inside, rather than an active pen with electric circuits. Users can decide to write on the display with the pen provided with the Samsung Flip but this can be replaced with other objects such as a pen, pencil or even small sticks instead. The 2019 Samsung Flip has an enhanced ability to recognize the thickness of writing objects and reflect the thickness on the display. 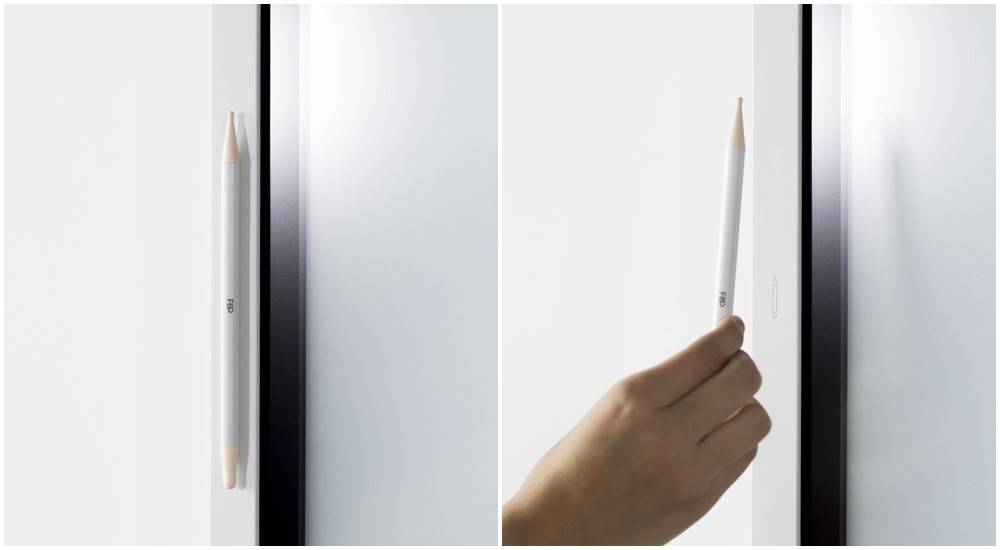 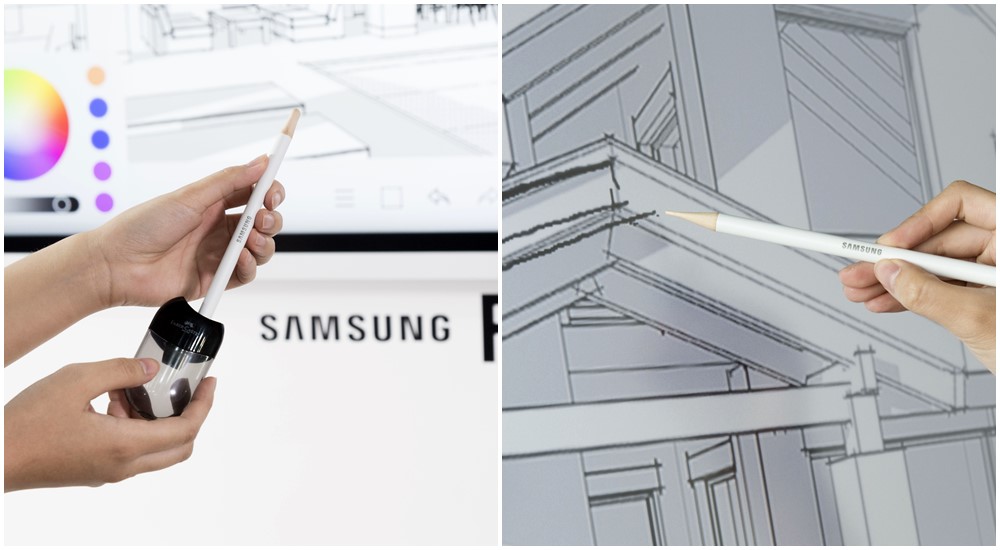 The 2019 Samsung Flip is exceptional in its writing recognition speed and it has no delay whatsoever. With improved recognition speed compared to the previous Samsung Flip, the new product is the fastest in the industry. It also delivers the feel of analogue in a digital environment via the flip pen. For example, the wooden material flip pen provides the feel of using a pencil. With this feature, users are able to write or draw on the screen using the slim profile of a realistic pencil tool. 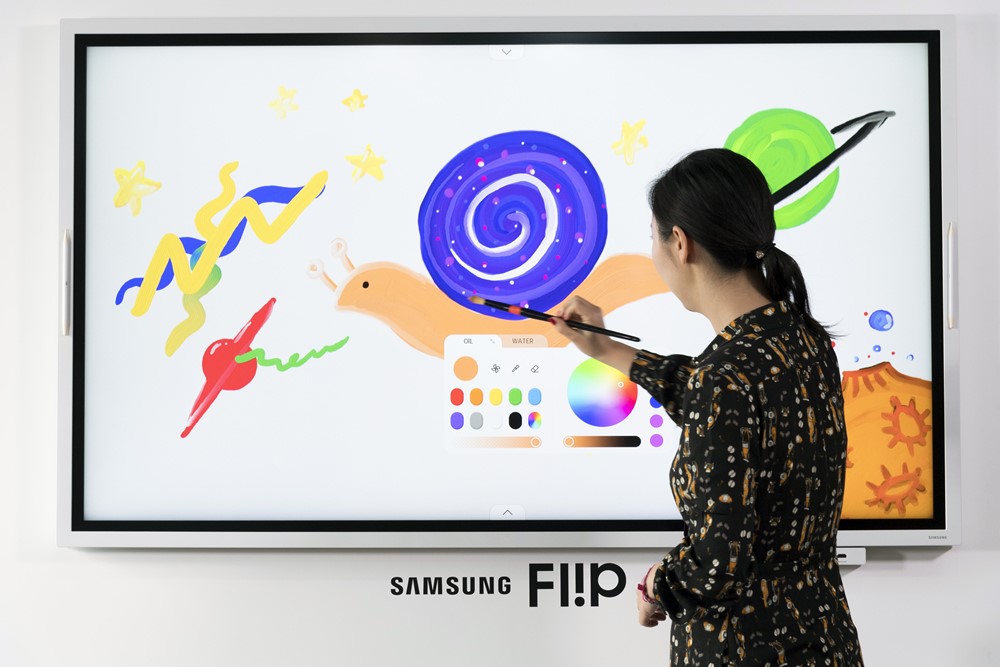 To support the ideation process in meetings, the pen mode’s ability to recognize an object’s thickness provides four options – thin pen, highlighter, finger eraser and palm eraser. The feature allows users to have an analogue meeting environment as if they were using a real marker, highlighter and eraser. Additionally, the new brush mode of the 2019 Samsung Flip is another fresh and innovative concept. It emphasizes more detail by allowing recognition touch on the display in 1,024 detailed levels. It even recognizes the most delicate touch of a brush.

When you draw on the 2019 Samsung Flip display with Brush mode, the screen recognizes the thickness of the brush you use. They are all perfectly expressed on the display just like an analogue painting. Users can experience two types of paint textures – oil painting and water painting.

For example, when you draw a blue line in the oil painting mode and draw a yellow line on top, the two colors will be mixed where they overlap each other. As if you were using real paint that had not dried yet, the two colors will mix together into a green color, just like an oil painting on a canvas. And if you click on the drying paint option and draw a new line, the previous lines dry up and prevent any new colors from mixing together.

Convenience for Everyone to Use Easily

The 2019 Samsung Flip values user convenience as the top priority. For the first time, the Samsung Flip was made to help those who experience difficulties in meetings where the digital and the analogue come together, causing complexities in an office. We wanted to make the entire process of making a presentation, writing content on a white board, taking pictures of the final meeting results and sharing them as simple as possible. Moreover, the 2019 Samsung Flip also adds various new functions to enhance the user experience.

The Note-Layer function allows you to freely take notes on documents or pictures shown on the display. Utilizing the ‘Selection Tool’ and ‘Merge to Roll’ functions make your image editing much easier. For example, you can put an illustration on a roll and choose the ‘Selection Tool’ to cut out only the selected parts from the illustration. Then, you may choose ‘Merge to Roll’ to paste the cut-out images onto the roll. These images are recognized as the same as the actual drawings, so you are free to delete the background or edit the images.

If you click the upper portion of the display, it will trigger the intuitive function icons for bringing data from a mobile device, PC or USB to the Flip as well as sending completed work from the Flip to email, printer, USB or network drive. This allows people who use the product for the first time to move data with ease. Also, using the ‘To-Mobile’ function, which allows users to take advantage of the basic network storage implemented in the Flip, you can check your completed work from the Flip directly on your mobile device without sending the data through email or other additional methods.

The screen share feature is also very useful. The 2019 Samsung Flip can be connected to a bigger display through the screen share function when you need to deliver content to a big audience such as in a large-scale lecture. You can use a wireless connection or you can use the screen share terminal of the Connected Tray in front of the 2019 Samsung Flip to connect the two displays using a HDMI cable. Samsung Flip was originally targeted to architectural design offices and design companies where small-scale face to face idea meetings are frequent. After launching the first product, it received such high praise from the users. As they wanted to use the product in more diverse areas, the 2019 Samsung Flip’s target has expanded to conglomerate conference halls, large seminar rooms, schools and hotel conference rooms with a larger 65-inch screen and various features.

The Flip also has the Remote PC function to follow the recent office trend of working on remote desktop computers. The users can access their own desktop or laptop computers from the Flip to view or edit data, which can be seamlessly used in a meeting environment. Also, you can load documents from your personal cloud space using Microsoft OneDrive, Office 365 and Web Browser that are going to be serviced in the Flip from September. The 2019 Samsung Flip is a reassuring partner in a digital meeting environment.

Thanks to Design, Your Meetings Become More Interesting! 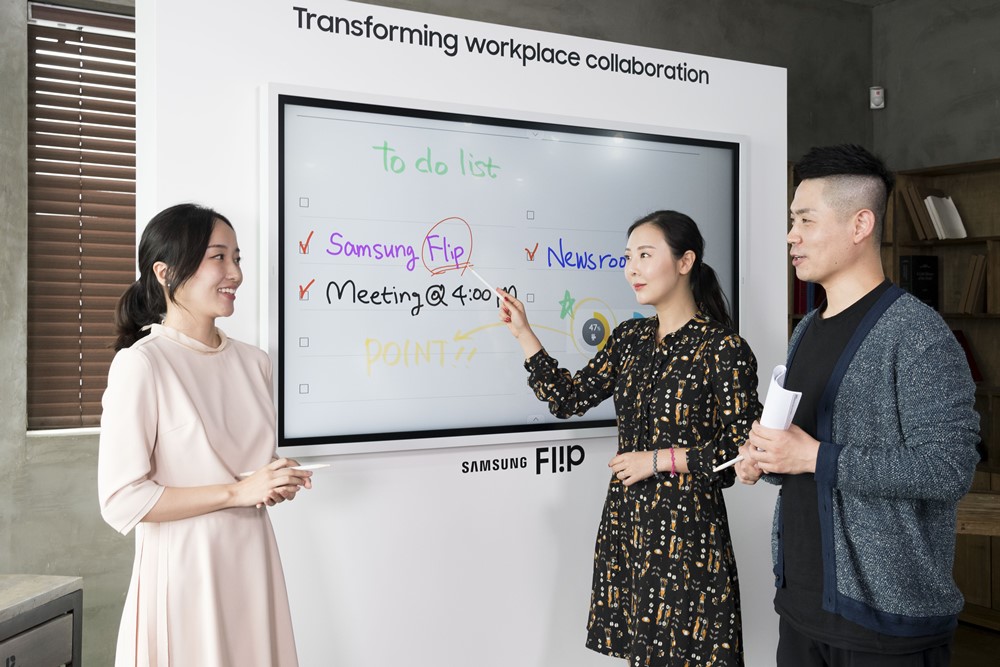 One of the highlights of the 2019 Samsung Flip is its design. First, you see its light gray color. Jae-gwang Lee from Samsung Visual Display, the developer of this product, says, “Similar to the previous model, the 2019 Samsung Flip has light colors to make sure it feels accessible and usable for people. The product uses light colors, particularly a light gray color to be well harmonized not only in offices and meeting rooms but also in trendy meeting spaces.”

The Flip’s wall-mounted design is also noteworthy. Its ‘no gap wall mount’ design allows the display to be completely attached to the wall, giving it a sleek and clean appearance. Other than the wall mount on the back of the display, the product is installed with magnet brackets on all four corners on the back to prevent moving and providing stability. The pen illustration on both sides of the display where you place your pens is simple and modern, capturing every detail of its elegant design.

The 2019 Samsung Flip makes your conference room and classroom trendy. Jae-young Kim, product planner at Samsung Visual Display, says, “The 2019 Samsung Flip offers a smart office and modern work environment where users can rapidly capture ideas, share them with other people and save them without any difficulties.” 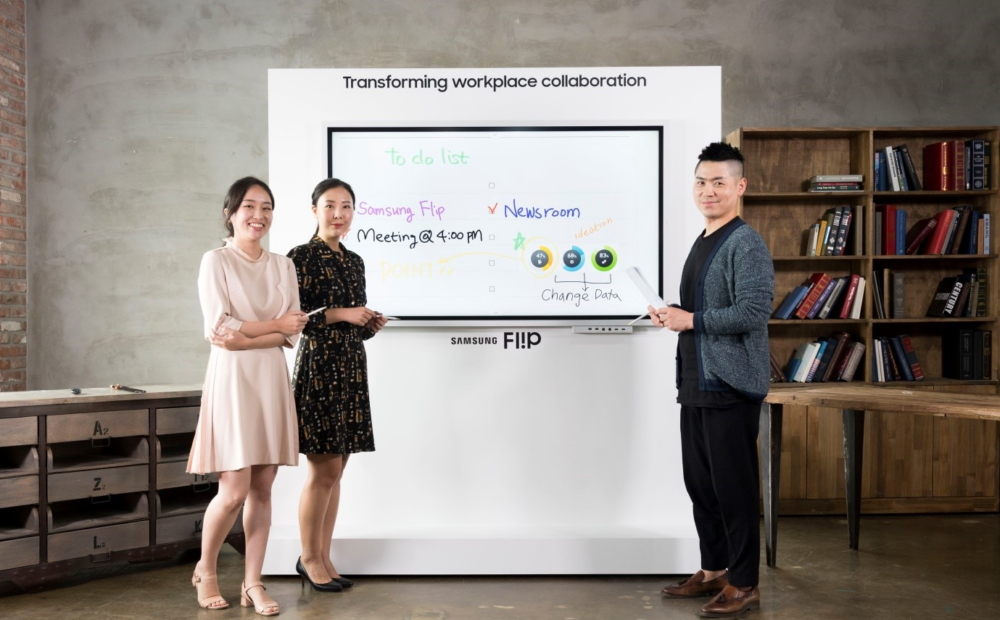 The 2019 Samsung Flip has the convenience of digital yet captures the feel of the analogue. While providing a certain comfort of old technology, it will provide the best optimized modern meeting environment with the three key features of pen, convenience and design.