What is High Dynamic Range (HDR)?

TV innovation is, at its heart, the quest to make viewers feel that the reproduced images they see on screen are as lifelike as those they see in the real world.

This requires collaboration from across the industry. Cameras need to record more accurate video; post production studios need to control the brightness, contrast, color, and highlights to allow their intended image to be shown on the screen; distribution channels need to find a way to relay all that information in an agreed standard; set manufacturers need to make better panels and algorithms to recreate what the previously mentioned partners handed over.

The final image or video you see on your screen is usually only as good as the worst link in the aforementioned chain.

There are many ways to improve picture quality; one example is UHD (or 4K), where the industry came together to present more pixels in a given screen. Another one of the latest developments in this regard is High Dynamic Range (or HDR) which, in a nutshell, helps produce ‘better’ pixels.

Many TV standards are stuck at an outdated 100 nits* – defined in the days of CRT TVs. In producing video for these standards, a lot of details in the dark and colors were lost. We’ve come a long ways since. Following numerous advances in technology, the collective industry has found ways to convey more of the original, or intended, video.

… And It’s A World of A Difference

For years, with each new TV, you’ve heard that colors are better than the previous set. But as HDR threads the efforts from across the industry, the difference is really self-evident. The details, previously lost in the shadows or glares, really stand out. Below is an example:

As previously mentioned, the industry needs to work together to bring about meaningful improvements in picture quality. In a joint effort to find ways to provide better picture quality, over 30 members from around the industry came together to form the UHD Alliance including production studios, content networks, tech companies, and TV manufacturers.

The UHDA has created Ultra HD Premium, a certification program that sets out the technical standards TV sets, contents, and distribution channels have to meet if they are to deliver the highest levels of picture quality. TVs bearing the Ultra HD Premium logo (such as Samsung’s SUHD TV) support HDR content. Meanwhile, compatible video material including streaming and Blu-ray releases likewise carry the label, certifying that their contents also meets the group’s standards. 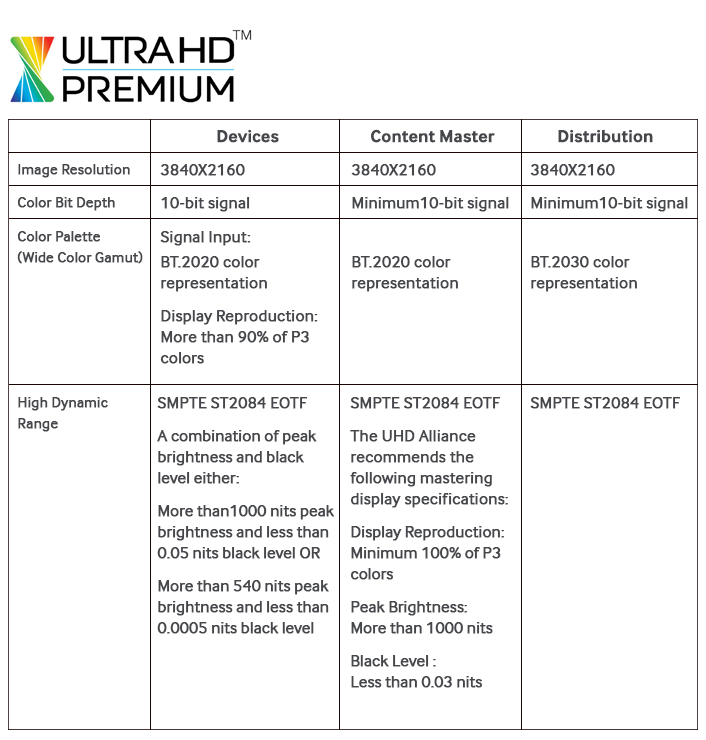 In technical terms, this means that TVs needs to meet standards of the likes of HDR10 (color depth based on 10-bit signal), peak brightness/black level combination (at least 1000 nits peak brightness and less than 0.05 nits black level), etc. But all in all, the average consumer need only look for the UHD Premium logo.

A range of content providers have been quick to climb aboard the HDR boat. Major providers have already started to provide premium streaming services with HDR.

And there is more to follow. The Samsung Ultra HD Blu-ray Player was released this year, and is compatible with SUHD TV devices. Distributors also say they are planning to release more and more HDR10 Blue-ray disc titles in 2016.

Considering it has been only around a year and a half since Samsung unveiled its first HDR solution at the Consumer Electronics Show (CES) in 2015, the technology’s progress has been nothing short of extraordinary.

For users, the true difference comes with the viewing experience. HDR works in tandem with the human eye, concentrating on contrast in dark areas and creating distinguishing subtle color differences in brighter areas.

Breakthroughs come think and fast in the world of TV, but with HDR now seemingly taking the fore, the way we watch is about to change forever. Television viewers could be standing on the verge of a future brighter than anyone has ever foreseen.

* A nit is a standard unit of luminance, frequently used in measuring the brightness of display devices. One nit is the luminous intensity of a candle lighting an area of one square meter.