Why Are Quantum Dot Displays So Good?

Samsung’s 2016 SUHD TV lineup features Quantum Dot technology, which enables the set to present even better picture quality while improving overall energy efficiency. What, then, is a quantum dot; and why is it so good for display?

What Is ‘Quantum Dot?’

Quantum dots are nano-sized crystals made of semiconductor materials. A nanometer (nm) is one billionth of a meter, which means these extra-small particles are smaller than 1/10,000 of a single strand of human hair.*

Quantum dots can be made of different kinds of elements, but when regulated down to a size small enough, the quantum dot possesses physical properties that make it suitable for many different applications. For example, quantum dots are very efficient in absorbing and then emitting light. Based on this quality, quantum dot technology is being researched in areas such as solar panels, bioimaging, and, of course, display.

Why Is Quantum Dot Technology Good For TVs?

Quantum dots are photo-active; they absorb, and then emit light. And when they do, even if the dots are made of the same material, the light each quantum dot emits is a specific color (or wavelength) depending on the size of its core. For example, a quantum dot with a core of 2nm will emit a blue light while one with a 6~7nm core will emit red. 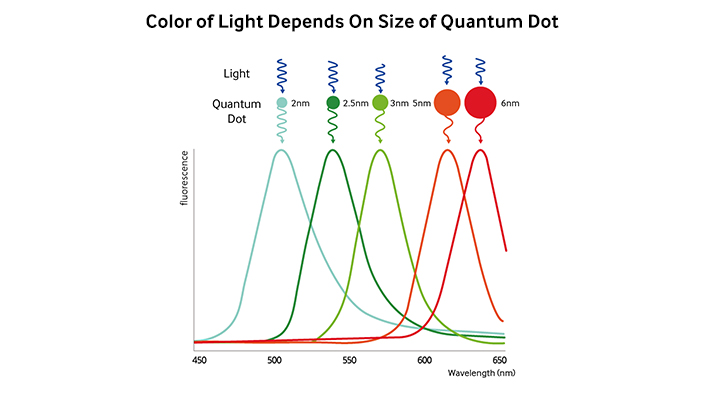 As a result, the 3 primary colors can be more clearly distinguished in comparison to conventional TVs, which helps the quantum dot display show a wide range of colors more accurately. 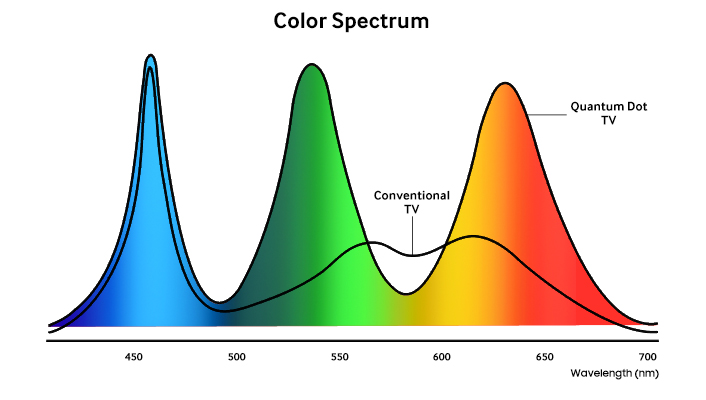 Another advantage of these light-emitting quantum dots is that they’re very efficient. Compared to phosphors in conventional TVs, not only are they able to produce more colors, but the photo-active property allows for better light efficiency.

By leveraging this advantage, Samsung was able to jack up the peak brightness of its new SUHD TVs to 1,000 nits and higher, opposed to the previous 400 nits for conventional TVs– all the while further improving overall energy efficiency. Colors are perceived by light, and by offering more light along with more colors, Samsung SUHD TVs are great for HDR content.

Many previously developed quantum dot solutions were based on materials that involve cadmium, such as cadmium sulfide (CdS) or selenide (CdSe). Although these quantum dots share the same advantages as written above, they hold a deadly threat against the environment as toxic Cd2+ ions may be released through nanoparticle degradation.

Samsung’s quantum dots, however, are cadmium-free. They’re based on indium (In) instead. After much research and development, Samsung is currently the only company that produces cadmium-free quantum dot displays. Samsung started focusing on quantum dot technology in 2001, and has since registered over 150 patents on the subject.

Samsung’s quantum dots are also durable. Being an inorganic compound, quantum dots are more resistant to oxidation than organic substances. Samsung also applies a quad-layer coat to its quantum dots to ensure the quantum dot display is durable and kept stable over years of time. The result: a fantastic display that keeps its picture quality year after year.

* Calculation based on assumption that an average human hair is about 100μm wide.