Beginning today, we bring you a pick of stories of Samsung India employees, interns and partners who have worked selflessly during these difficult times, despite their own personal challenges, to help the community, colleagues, friends and families, in an exemplary display of leadership, teamwork and kindness. This series is dedicated to frontline warriors across India, and all those who have been working tirelessly on the ground and on social media on their smartphones, reaching help to someone, somewhere in India. 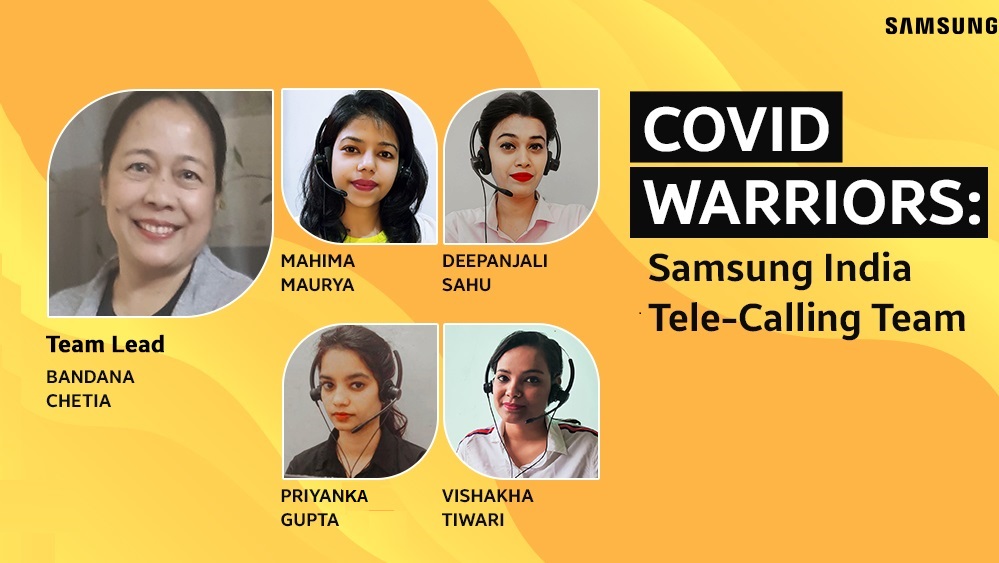 The second wave of Covid-19 had taken everyone by surprise. It was fast and furious and impacting swathes of population across the country. The demand for hospital beds, oxygen and critical medicines shot up. While most people genuinely wanted to help, an overload of information available and being shared on social media often became a roadblock with a lot of the information turning out to be incorrect or invalid.

“At Samsung, we set up Samsung Covid Support Group (helpdesks) around the country to support our 70,000 employees and their families in India, with many employees from across functions volunteering to man them. But one problem we came to realize soon was that the list of available oxygen or ICU beds in hospitals, chemists, blood banks, ambulances, oxygen cylinder or O2 concentrator suppliers, was in thousands and often invalid. Imagine you hitting a wall when you are battling to save someone’s life,” says Arindam Lahiri, General Manager, HR at Samsung India, who was leading the project.

This is when the team decided to rope in the services of colleagues at the Samsung customer service call centre to verify this huge list of contacts and prepare a genuine list. But there was little time to do so. 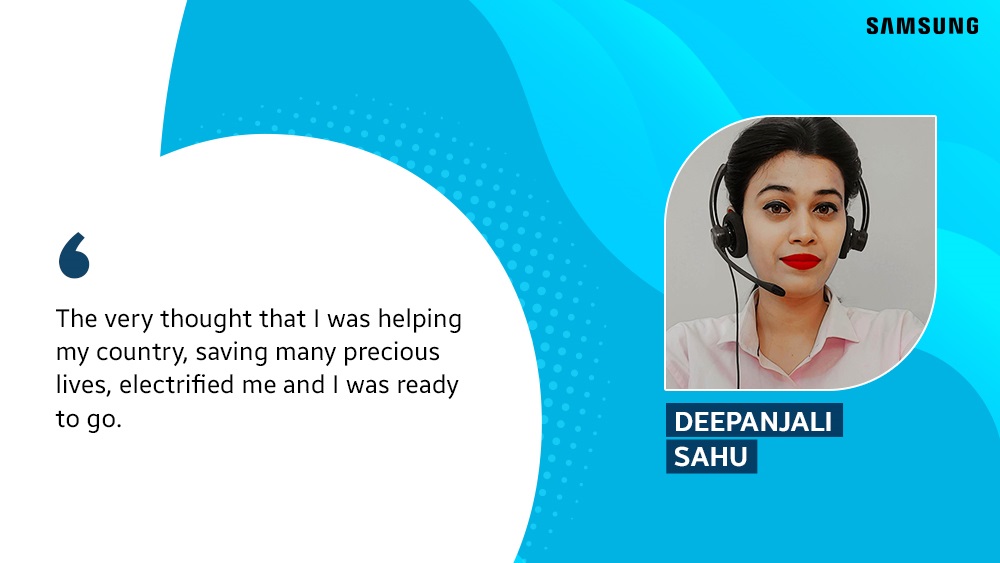 “When I got a call from my boss, I was told it is war time and I have to prepare this list in under a week. It was a mammoth task and I was stressed myself because of the lockdown, but this was something I was doing to help people of my country, saving many precious lives. The very thought electrified me and I was ready to go,” says Deepanjali Sahu, who hails from Lucknow.

Deepanjali was among a five-member all women team at the call centre who were handpicked for the job. They had to work through every number on that list, separate the genuine from the fake, update the availability of supplies at the genuine ones, make a list under each head, and share with the teams so that employees, their friends and families, and the public with whom they shared it, could use it.

Even before the team started calling, time and effort was spent in putting together a detailed questionnaire for each category – hospitals, oxygen suppliers, chemists who home delivered, people supplying food to Covid patients, blood banks, testing centers and ambulances – along with the scripts.

“Our girls were getting into unchartered territory, something they had never done before,” says Bandana Chetia, who heads training at the Samsung Call Centre. “We designed these questions so that they could get quick answers without wasting the time of the person on the call.”

The calling team was sensitized on this aspect right in the beginning and that helped them stay calm when the respondents were rude to them.

Some of the Call Centre team had their own family members down with Covid in other parts of the country. But they were on a mission to help. 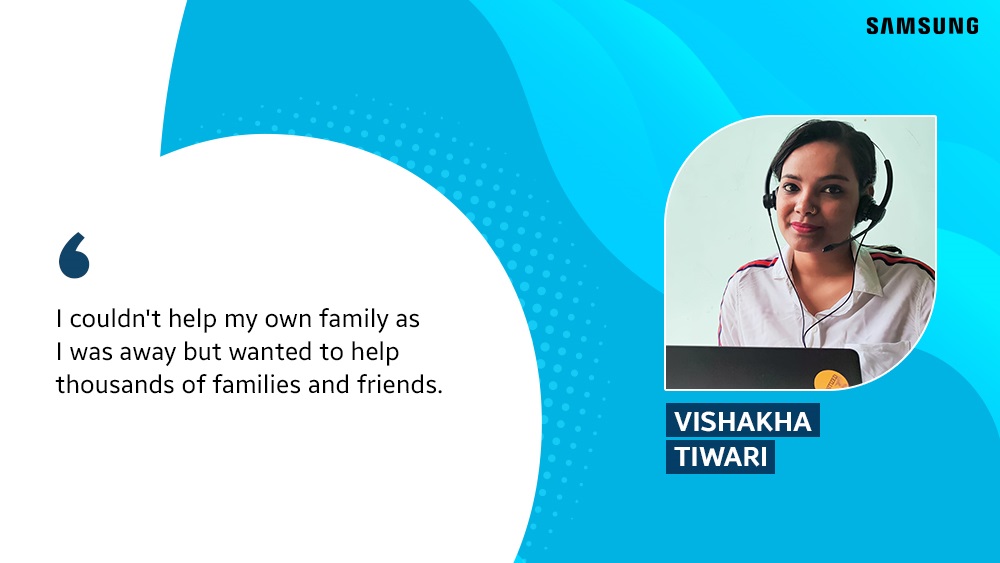 “My cousin in Bihar was down with Covid and I really wanted to help her and the family, but was unable to do so as I was away. That motivated me to work hard and help whoever I could when this opportunity came to me. Today when I think this list is helping thousands of families and friends, it gives me a lot of satisfaction that I was a part of such a noble act,” says Vishakha Tiwari, one of the five executives in the team.

It was a daunting task. Doctors and hospitals wanted them to take an appointment and walk in to get details. Many ambulance staff picked up their calls but disconnected instantly. Many suppliers said their stocks had run out and asked them to call back for updates later. 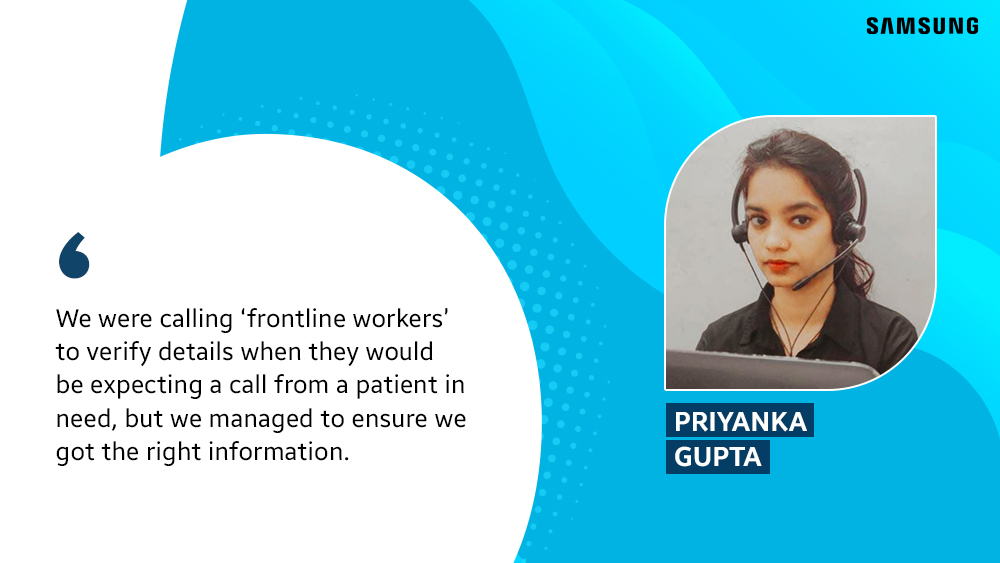 “We could understand their compulsions and frustration. We were calling ‘frontline workers’ to verify details when they would be expecting a call from a patient in need,” says Priyanka Gupta. “But we managed to convince many service providers to give us time because we were doing it for the greater good, to ensure people who call them in time of need had the right information. And they understood. Some even took the time to let us know when their stocks would be replenished,” she recalls.

With their effort, the five were able to prune the number down to 20% of the original list in a week.

This list is now being verified and updated every week and is shared with employees across the country. Employees further share it with their friends, families and on social media, helping those in need.