Samsung India, the country’s number 1 smartphone maker, ended 2016 on a high note, with record sales of mobile phones. Samsung’s cutting-edge technology and “Make for India” innovations, which provide local flavour in the fiercely-competitive domestic market, are some of the reasons behind Samsung’s strong showing in 2016.

The revolutionary S bike mode is among the “Make for India” features that Samsung unveiled last year. Launched in March 2016, the S bike mode encourages responsible riding and ensures a tension-free ride. 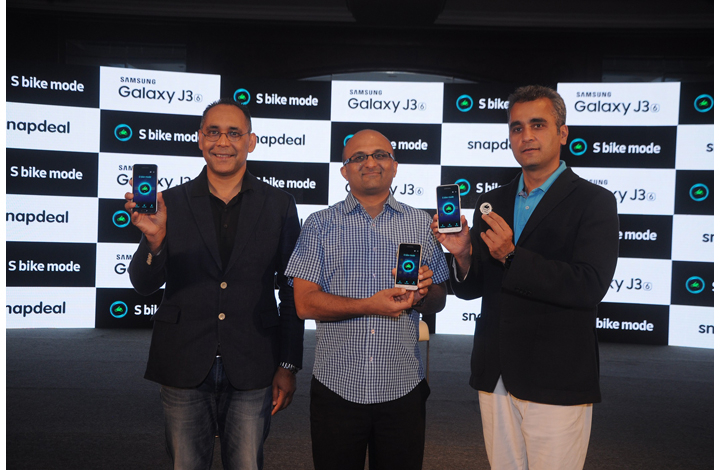 It is also the perfect embodiment of Samsung’s vision, which is the pursuit of meaningful innovations to make people’s lives better.

To develop the S-bike mode, Samsung engineers spent hours studying consumers’ phone usage behaviour. It was then that they realized that incoming calls are a major distraction to millions of bikers. A majority of bikers would snug their phones up in their helmets to take calls, putting their lives at danger. The findings of Samsung’s research became the basis of development of the S bike mode.

Seven months after its launch, the S bike mode remains the only dedicated phone safety feature for two-wheeler riders in India, with an adoption rate of 50 per cent among Galaxy J series smartphone users.

The S bike mode sports an intuitive user interface, allowing users to see a log of call notifications, while the mode is enabled. It also has a Smart Reply feature, where selected contacts will receive an auto-SMS with an estimate of when the user is likely to be available for a call. This feature works on the basis of trip destination entered by the user. There is also a dashboard of time and distance travelled using the S bike mode.

Samsung integrated its cutting edge innovation with the Galaxy J3, which is the first affordable segment device equipped with NFC hardware, necessary to activate the S bike mode.

It’s a hardly a surprise then that the Galaxy J series is the most selling affordable smartphone in the country. The S bike mode is the perfect example of an innovation that is really meaningful and useful to people.

How the S bike mode Works

Step 2 – Urgent Call Alert System: All callers hear a pre-recorded message that informs callers that the Galaxy J3 user is riding a two-wheeler and is unable to take the call. The S bike mode user does not get any notification that there was an incoming call (to avoid distraction). In case the call is urgent, the caller may choose to press 1, which allows urgent calls to go through.

Step 3 – Motion Lock: This feature ensures that if the S bike mode user decides to take the urgent incoming call, he will need to bring his bike to a halt to be able to answer the call. The phone will not allow the incoming call to get answered owing to motion lock. This safety feature is designed to encourage responsible riding.