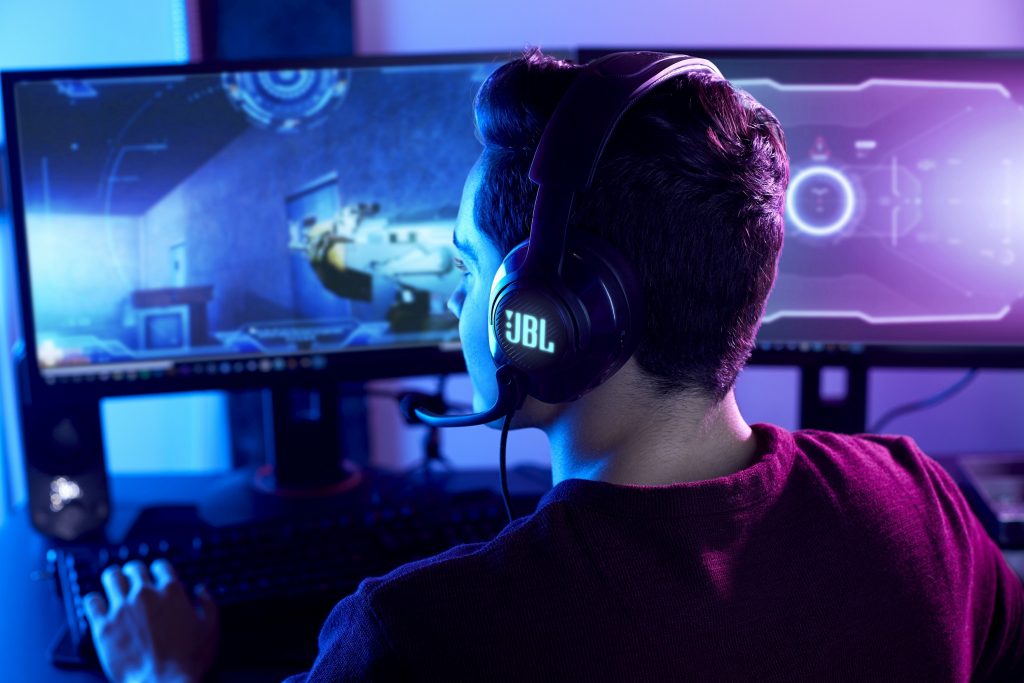 When it comes to competitive gaming, sound is survival – and JBL knows great sound.

Today, the company announced the launch of first-ever JBL headset range in India designed exclusively for gamers, featuring the JBL QuantumSOUND Signature™. The JBL Quantum Range delivers immersive audio quality and pinpoint accuracy to provide a true competitive advantage. From the thrill of tracking enemies in FPS games, to engaging in epic MOBA battles, the JBL Quantum Range amplifies victories with a sound experience that transforms each headset into a crown for the everyday champion. The JBL Quantum Range will be available through www.JBL.com and all leading online and retail stores in India starting today.

The launch follows an exciting announcement of the JBL’s association with lifestyle power brand and gaming organization ‘100 Thieves’ bringing on board some of the top competitive global gamers in the industry. The exciting new range will cater to a burgeoning gaming industry in the country. The online gaming segment was estimated to be a $1.1 billion opportunity by 2021, according to a Google-KPMG report in 2017, which is now expected to increase at much faster pace. With one of the world’s largest youth population, India is poised to become one of the world’s leading markets in the gaming sector.

With seven headset models available, from wired to wireless and affordable to professional level, the range includes options for both casual and competitive gamers. The flagship JBL Quantum ONE takes sound to the next level, built exclusively with JBL QuantumSPHERE 360™ sound technology. This feature uses proprietary algorithms and integrated head tracking sensors, so competitive gamers can hear enemies and movements around them like never before. The JBL Quantum 300, JBL Quantum 400, JBL Quantum 600 and JBL Quantum 800 feature the newest JBL QuantumSURROUND™ sound technology powered by the JBL QuantumENGINE™ PC software. This allows gamers to experience virtual worlds in added dimensions by adding the height channels that replicate a much wider, realistic spatial soundstage to facilitate next-gen cinematic game immersion.

“At JBL, we know sound better than most, and we are excited to serve Indian consumers who are looking for the most accurate soundscape while gaming. The JBL Quantum Range has been developed with extensive testing resulting in a highly immersive experience that makes every gamer more competitive. The QuantumSURROUND™ technology is one of the most advanced technologies available for gaming headsets that is engineered to outperform most other spatial sound tech offerings in the world.” Said Vikram Kher, Vice President- Lifestyle Audio, HARMAN India.

The JBL Quantum headsets will be available at the following price (MRP): 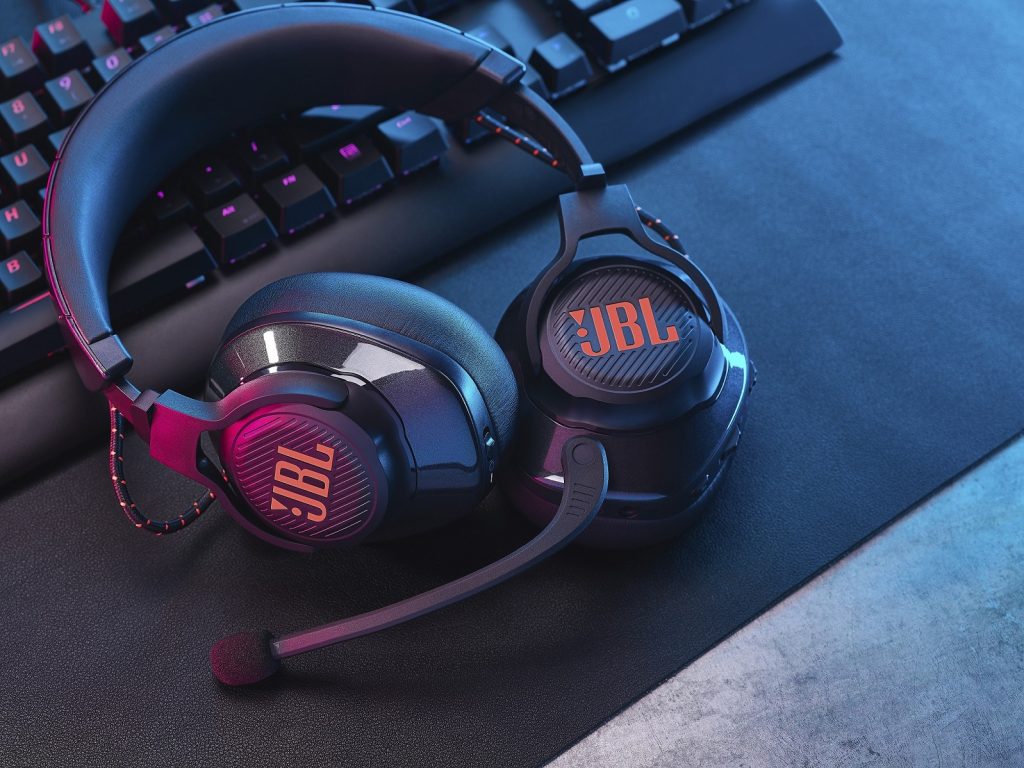 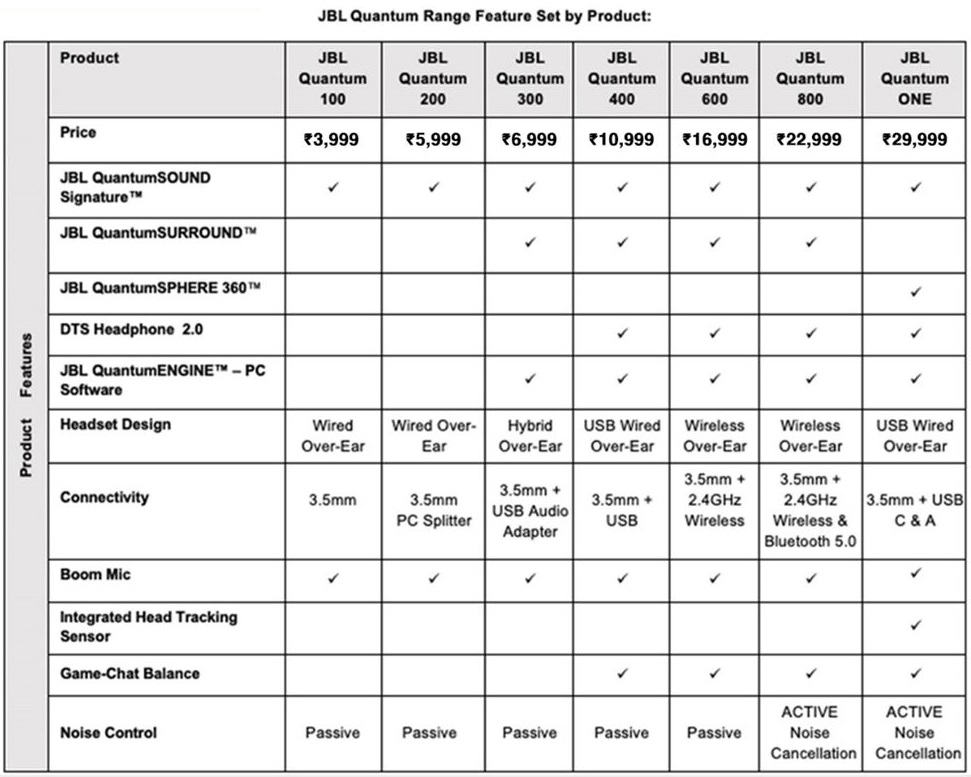 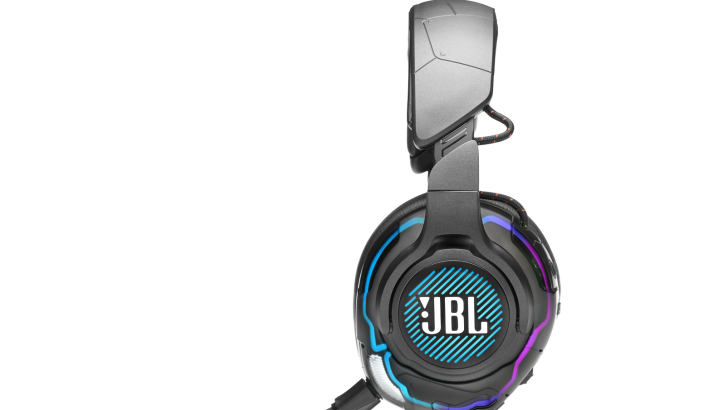 JBL creates the amazing sound that shapes life’s most epic moments. From iconic events like Woodstock and concerts at Madison Square Garden, to games at Yankee Stadium and weekend road trips, JBL elevates listeners’ experiences with award-winning audio that lets them make the most of every moment. With unmatched professional credentials and over 70 years of delivering industry leading innovation, JBL is the authority in engineering superior sound.

HARMAN (harman.com) designs and engineers connected products and solutions for automakers, consumers, and enterprises worldwide, including connected car systems, audio and visual products, enterprise automation solutions; and services supporting the Internet of Things.  With leading audio brands including AKG®, Harman Kardon®, Infinity®, JBL®, Lexicon®, Mark Levinson® and Revel®, HARMAN is admired by audiophiles, musicians and the entertainment venues where they perform around the world. More than 50 million automobiles on the road today are equipped with HARMAN audio and connected car systems. Our software services power billions of mobile devices and systems that are connected, integrated and secure across all platforms, from work and home to car and mobile. HARMAN has a workforce of approximately 33,000 people across the Americas, Europe, and Asia. In March 2017, HARMAN became a wholly-owned subsidiary of Samsung Electronics Co., Ltd.