[Hands On] The Galaxy A80 is Empowering Live Content

Ever at the forefront of hardware innovation, Samsung Electronics is empowering users wanting to create, collaborate and consume on the go with the newest smartphone in the Galaxy A series. After spending some time with the Galaxy A80, we found that the phone’s rotating camera array, full-screen New Infinity Display and ‘smart battery’ broke new ground as far as versatile, high-quality content interactions.

Samsung Newsroom got hands on to put the newest in the Galaxy A series to the test.

A Camera that Flips Around

Equipped with Samsung’s first rotating camera array, the Galaxy A80’s triple camera set-up features a 48MP main camera, an Ultra Wide Camera and a 3D Depth Camera. The camera array combines to produce a number of effects, some familiar and some new.

But the best part about the Galaxy A80 is that the range of camera effects aren’t just limited to the camera on the back of the phone. The A80 employs a slide-out panel on top of the phone that automatically extends upward and flips the camera around to face the user when they switch to the front-facing camera mode, allowing the powerful camera array to be used for selfie-mode photos too. The sliding module fitting seamlessly into the back of the phone when lowered, making the motor-driven raising and lowering of the camera array very sleek. 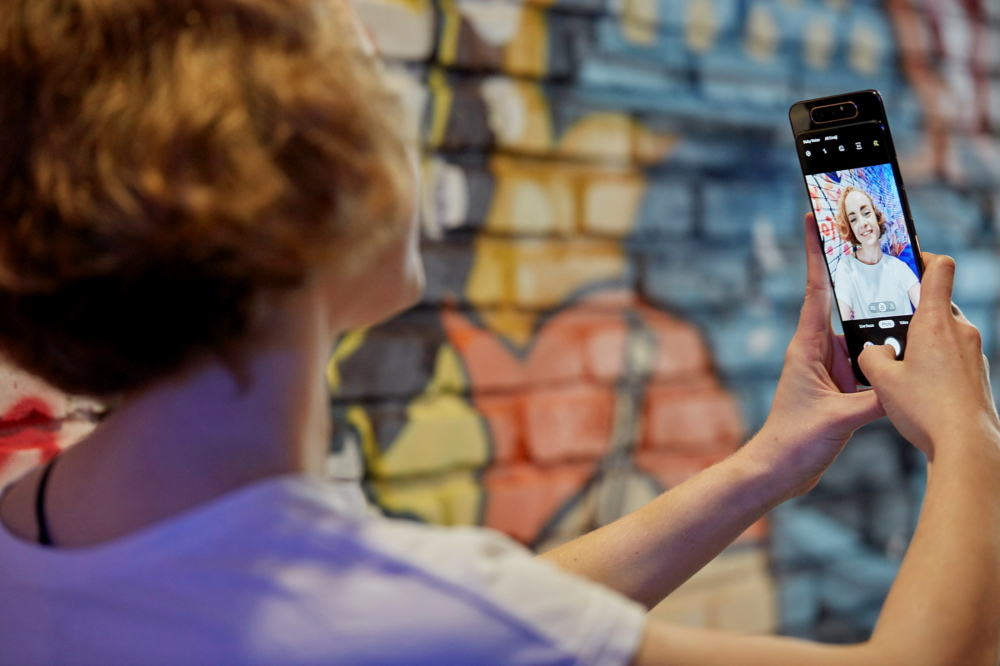 The ability to use the phone’s 48MP main camera for front-facing photos struck us as a game changer. For shots where we wanted to take a selfie while still capturing a significant portion of the background, Wide mode on the selfie camera was ideal. To take the effect a step further, the Galaxy A80 is also equipped with Ultra Wide mode*, which has a viewing angle as wide as that of the human eye, and is perfect for taking wide scenery and nature shots. We had a lot of success using Ultra Wide mode to take front-facing photos too, as it worked well for taking selfies with large groups of people and taking pictures in front of things like large landmarks. What’s more, all of these images were captured in stunning Wide Quad HD quality due to the fact that we were able to use the 48MP main camera to take them.

Live focus mode was another favorite of ours. The feature uses the depth sensor and machine learning to apply a cinematic blurring effect on the background while keeping the subject in the foreground crisp and focused. The ‘bokeh’ blurring effect is adjustable, and leads to some artistic, professional looking shots.

We loved the content creation possibilities afforded by the Galaxy A80 too. When taking videos while walking or running, Super steady mode was a big help in reducing camera shake and smoothing out videos. We were even able to create some movie-like videos with bokeh backgrounds using Live focus video mode. The Galaxy A80 allows you to switch in and out of selfie mode in the middle of a recording too, with the phone seamlessly blending the footage on either side of the camera rotation so that you can switch back and forth between the front and rear-facing cameras without interrupting your video**. The newest in the Galaxy A line can even capture videos in stunningly crisp 4K Ultra-high definition mode (3840 X 2160 pixels).

Watching videos on the notch less screen produced a certain cinematic satisfaction, and we found that the extra screen real estate provided by the lack of a ‘forehead’ at the top of the phone improved usability across the board. The phone’s Smart Multitasking feature***, for instance, worked well on the Galaxy A80’s bigger screen. Doing things like checking a map on one half of the screen while texting a friend to tell them where we were on the other half was very handy. The picture-in-picture mode was also great for when we were watching something, but still wanted to be able to do other things on the phone.

All the great features mentioned above are rendered useless without reliable battery life on the go. The Galaxy A80’s 3,700mAh smart battery and intelligent performance functions to be up to the task.

With its intelligent battery, the Galaxy A80 analyzes usage and automatically closes background apps that are unnecessarily using up battery life. To take battery conservation a step further, users can turn on Adaptive Power Saving, which allows their device to modify settings according to users’ expected daily usage. After giving the phone some time to get used to our usage patterns, we found that this feature really helped in preserving battery life. Once the battery does eventually tick down, the Galaxy A80 is equipped with Super Fast Charging**** technology to get users charged back up quickly. 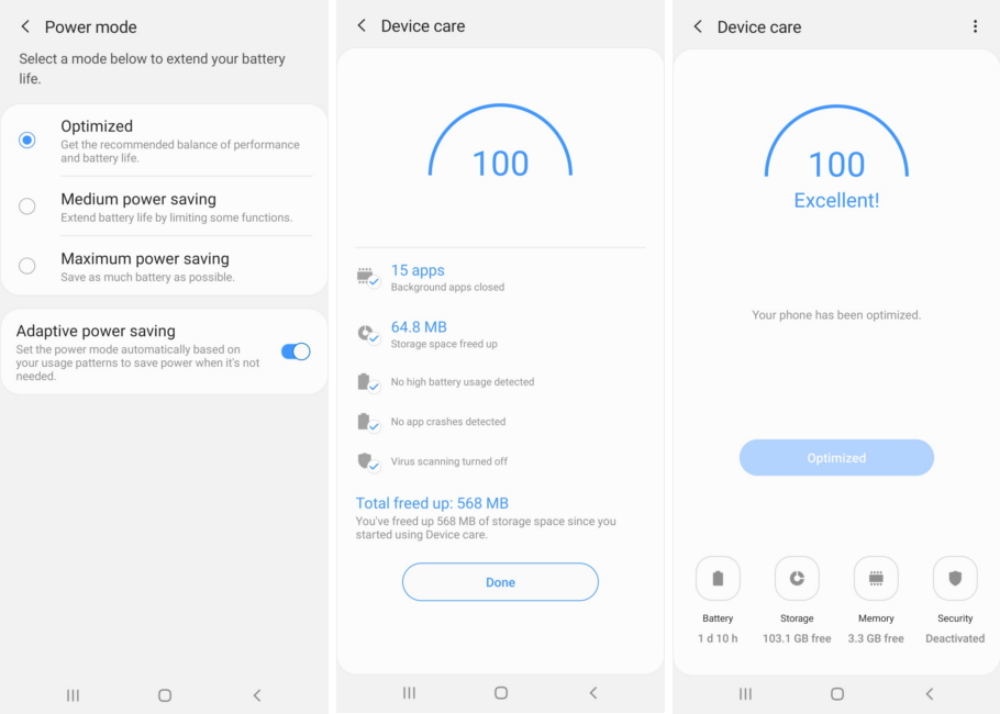 The device is also equipped with an ‘Intelligent Performance Enhancer’, which allows the phone’s AI to optimize CPU and RAM usage and ensure that the amount of power being drawn is always a match for the user’s unique usage patterns. We additionally appreciated how the Intelligent Performance Enhancer would preload our most-used apps to ensure that they were able to be quick-launched when needed.

In addition to getting lost in the Galaxy A80’s edge-to-edge New Infinity Display, now users can experience immersive sound too. The device is equipped with Dolby Atmos audio that allows for a 360-degree audio experience when using headphones or a Bluetooth speaker.

The Galaxy A80’s ergonomic curved back (available in Angel Gold, Ghost White and Phantom Black) makes it comfortable to grip in one hand. Likewise, the position of the power button lower down on the side of the phone, and easy-to-activate ‘One-handed mode’ made the phone easy to use when we had a lot going on.

Optimal for creating and consuming media, with a battery that can be counted on, the Galaxy A80 is the ideal companion for the content-hungry user living in the now.