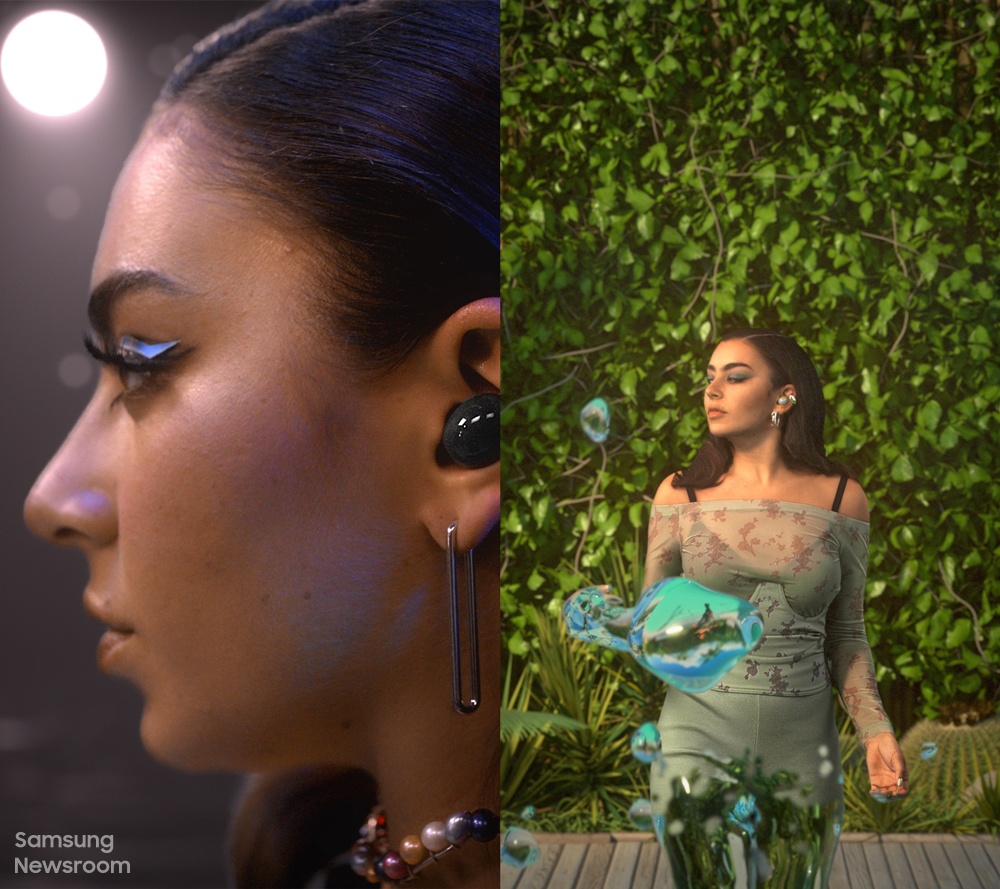 Sound is about personal preference, meaning that even the experience of listening to the same song can give people varying levels of satisfaction. While the purpose of earbuds is to reflect sounds as accurately as possible, an equalizer feature that tailors frequencies to users’ preferences can lead to a richer listening experience.

This year, Samsung launched the Galaxy Buds2, which are packed with optimal performance capabilities in addition to being both compact and lightweight. The fine-tuning of the equalizer in the Galaxy Buds2 was done in collaboration with famous musician Charli XCX to ensure the earbuds would deliver a broad range of truly refined sound options.

Newsroom met with the developers of the Galaxy Buds2 to hear about their collaboration with Charli XCX and the exciting, tailored sound provided by Samsung’s newest earbuds.

Authenticity of Sound – A Message From the Galaxy Buds2 to Users 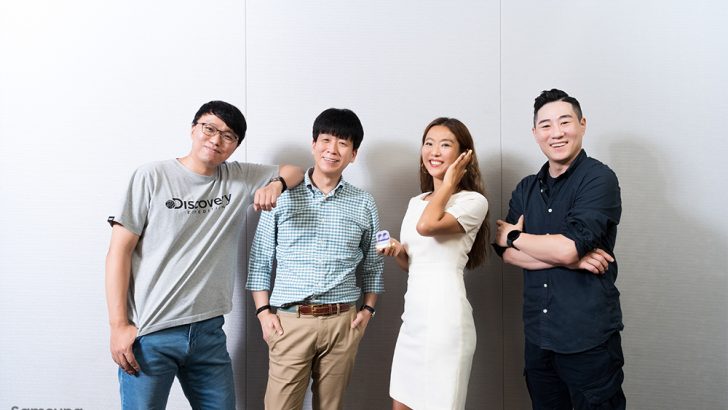 Samsung has set a new standard for advanced wireless earbud performance with the launch of each new product in the Galaxy Buds series. It has also strived to provide other advanced specs that are typical to great earbuds. Thanks to these efforts, the Galaxy Buds series has received rave sound quality reviews from audio enthusiasts. “In addition to being designed to provide excellent sound quality by default, the Galaxy Buds2 are also meticulously designed to suit users’ varied preferences,” said Kihun Kim. “We wanted an increasingly broad range of people to benefit from such advantages.” 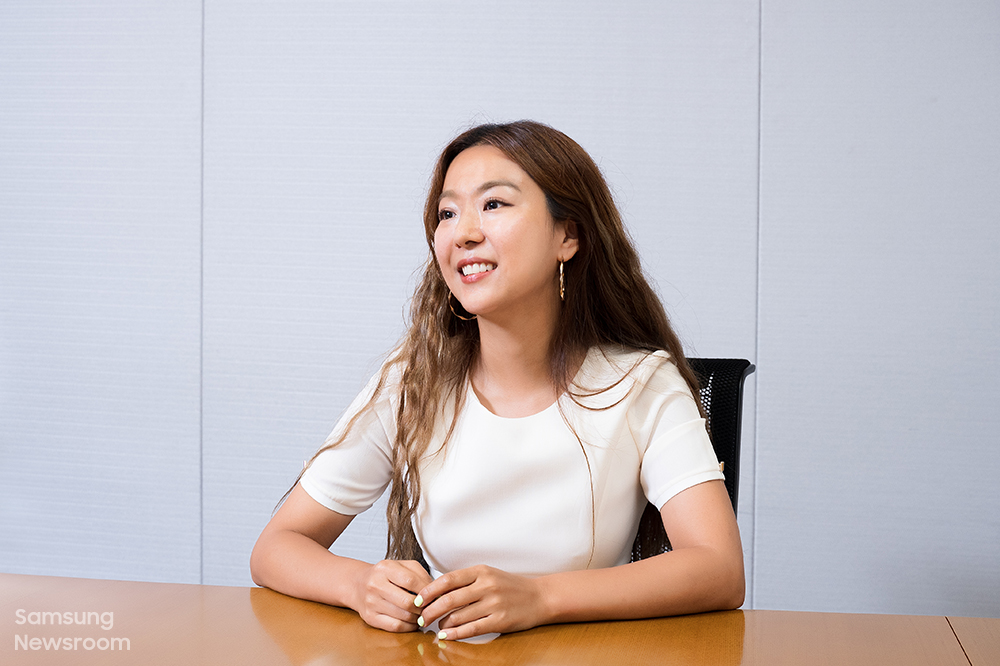 The Galaxy Buds2 developers collaborated with a prominent artist, Charli XCX, whose musical prowess and strong social media presence made her the ideal candidate for the project. “We wanted to bring in a musician who really connects with the public,” related Yunjin Ham. “We also thought that Charli XCX’s fashionable, creative vibe was a great fit for the sound of the Buds2.”

Generally, experts review products after their launch. This time though, the developers consulted with the artist from the development stage. “We asked the artist to try the Galaxy Buds2 out at an early stage and then worked with her to improve the products in such a way that they would do the music they were playing justice,” explained Saejin Cha. 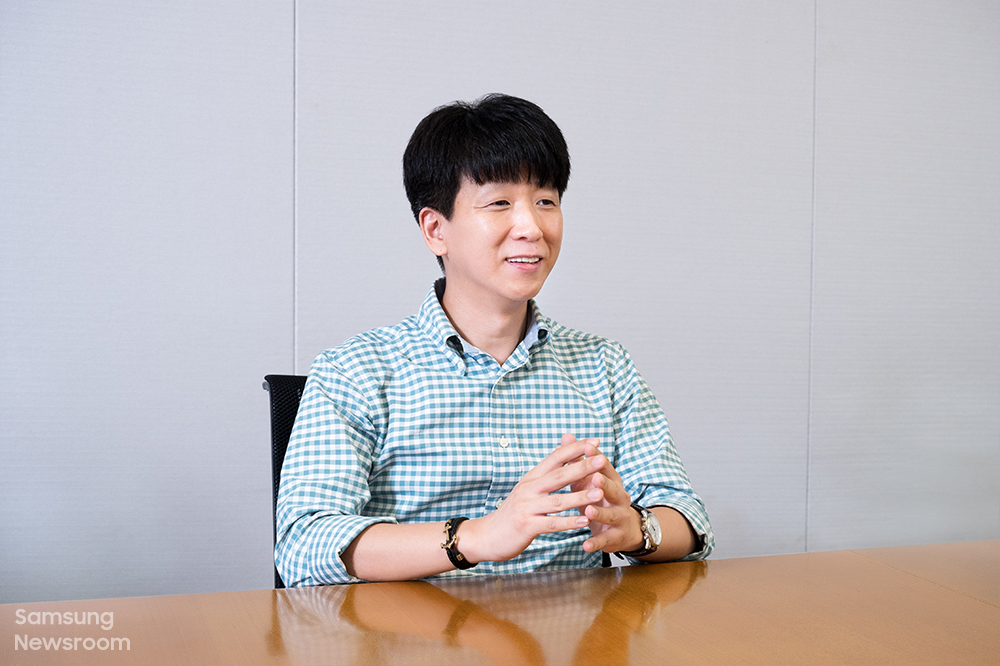 People have their own preferences when it comes to listening to music, with some preferring crisp treble and others prioritizing powerful bass. The equalizer feature therefore brings even more enjoyable listening experiences to users by allowing them to emphasize their favorite parts of the sound.

The Galaxy Buds2 provide six equalizer modes – ‘Normal’ (which provides an effect that is close to the original sound), ‘Bass boost’, ‘Soft’, ‘Dynamic’, ‘Clear’ and ‘Treble boost’. Bass boost mode, in particular, was optimized through the collaboration with Charli XCX. “Charlie XCX was very satisfied with the Galaxy Buds2,” related Kihun Kim. “She said that she especially liked the powerful sound of the Bass boost mode, but that it’d be nice if each sound could be more clearly distinguished. We took her feedback and fine-tuned the equalizer so that Charli XCX’s voice stood out and was complemented by the rich bass.” 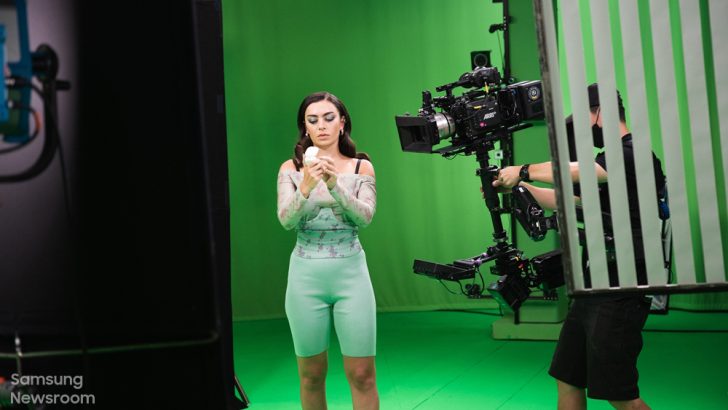 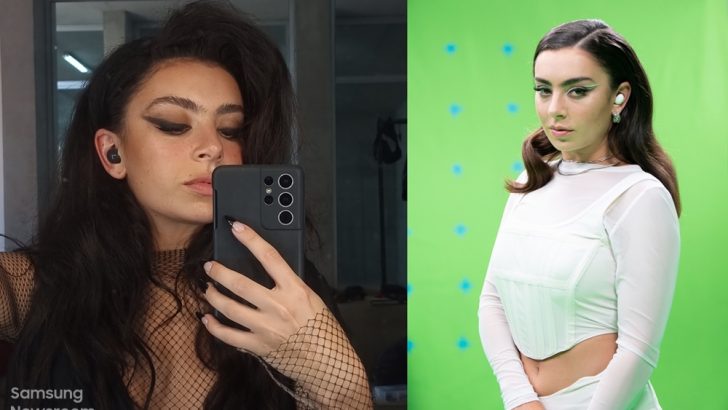 ▲ Charli XCX wears the Galaxy Buds2 while shooting the music video for her new song ‘Good Ones’.

More recently, Samsung and Charli XCX have continued their collaboration remotely. Charli XCX has also provided input on the color and design of the earbuds, and has suggested that she wants to wear the Galaxy Buds2 in her new music video, which will be released on September 2. “The bass and vocals are mesmerizing in Charli XCX’s new song ‘Good Ones’,” related Yunjin Ham. “I would like to recommend that users turn on the Galaxy Buds2’s Base boost mode when listening to this song.”

And the developers have shared other equalizer tips to help users further enrich their listening experiences. They recommend that users utilize Normal mode when listening to most kinds of music, including pop songs, and that they employ Treble boost mode when they want to accentuate a singer’s voice. When users are listening to chamber music or want to focus in on a single instrument during a solo, they should try the Clear mode, while Dynamic mode is recommended for orchestra music. “Sound is all about each individual’s tastes,” said Kihun Kim. “So, rather than setting a default standard for which mode the user should listen to, it’s better to let the user pick their favorite mode. It’s a good idea for users to listen to various songs in a single mode to find out which one they prefer too.”

The Secret of Exceptional Sound Quality: Harman Target and the 2-Way Speaker

The fundamental role of earbuds is to deliver audio that is as close as possible to the original sounds they are playing back. For the Galaxy Buds series, the world’s biggest audio company Harman International sets the standard as far as sound quality with its Harman in-ear target curve. The goal of the Harman target is to deliver sound of a quality that is on par with what would be delivered by high-end loudspeakers in an ideal listening environment. “The Harman target is the result of research that is being done over an extended period of time to find the ideal sound spectrum for users,” explained Kihun Kim. “The Galaxy Buds2 deliver the experience of listening to a Hi-Fi audio system in an earbud form factor.” 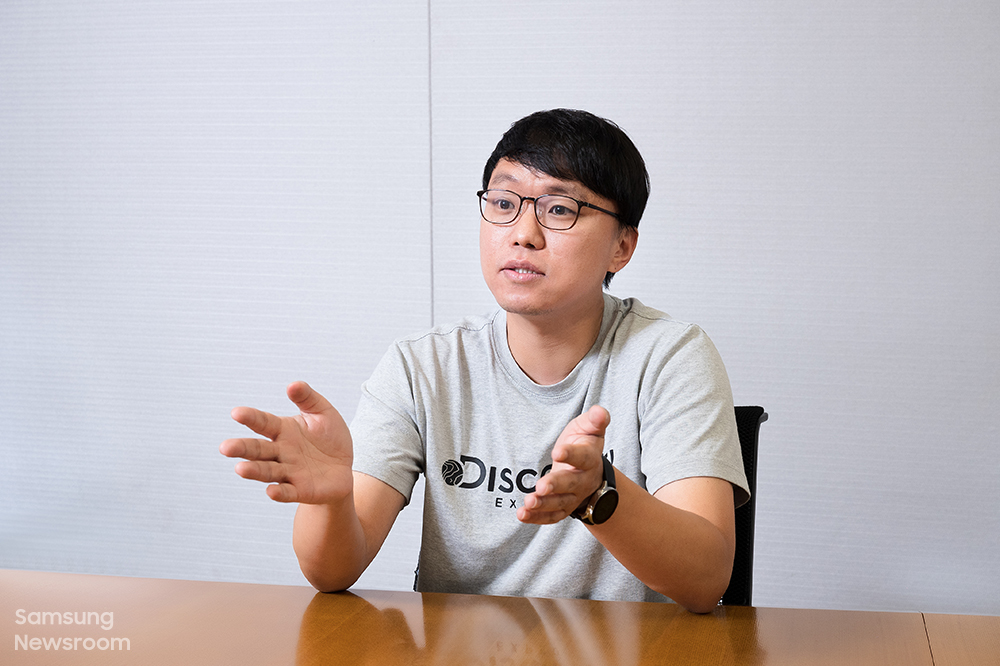 It is the 2-way driver in the Galaxy Buds2 that allows them to deliver highly balanced sound – from dynamic bass to clear treble. The developers came up with the compact 2-way driver in order to maintain driver performance while also making the solution small enough to fit into compact earbuds. “Usually, you need big drivers for excellent performance,” said Byungmin Lee. “But we were able to maintain performance while not only utilizing small parts, but also striking a balance between design and function.”

In addition to delivering refined sound quality, this also makes the sound of videos even more vivid. The developers also checked how well narrated content like audiobooks was being delivered by the Galaxy Buds2, with Byungmin Lee giving some useful tips. “It’s a good idea to use Treble boost mode when listening to content that is mainly comprised of speaking, such as TV and variety shows, and YouTube videos,” related Lee. “For media that is comprised mainly of special effect sounds, such as ASMR, users should use the Clear or Dynamic modes to enhance their experience.”

Enjoy Great Sound for Longer With Outstanding Comfort and Connectivity 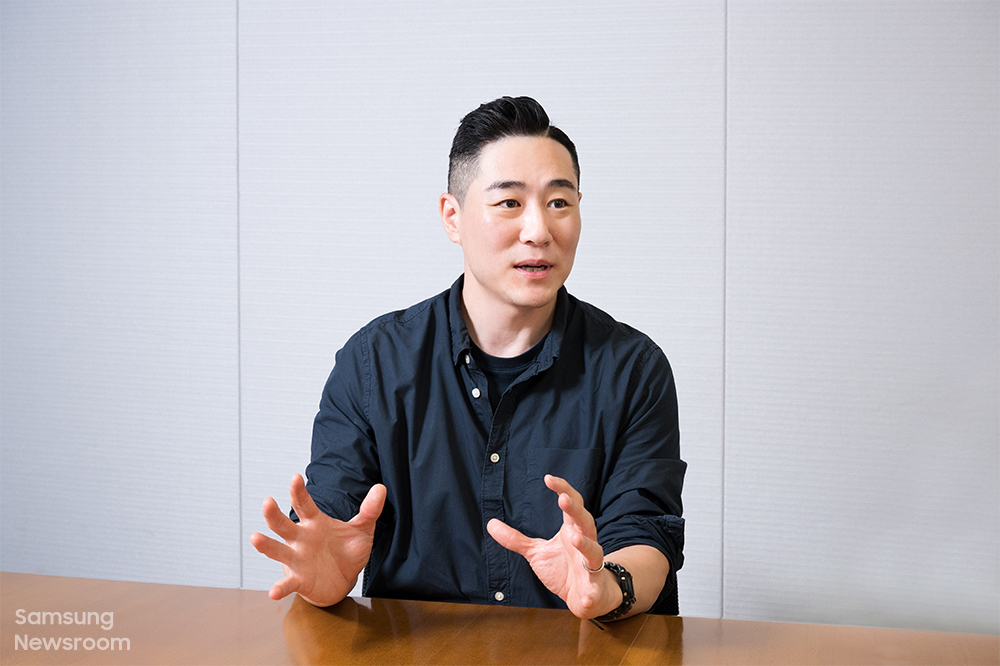 The fact that users often wear wireless earbuds for extended periods of time means that comfort is of the utmost importance. The developers have therefore worked to make the Galaxy Buds2 earbuds as light and comfortable as possible so that users won’t experience any discomfort whatsoever, even when wearing the earbuds for extended periods. “The ‘Galaxy Earbud Fit Test’ feature has recently been added to the Galaxy Wearable app,” reported Saejin Cha. “This allows users to check whether they are wearing their earbuds correctly or not.”

With the increasing frequency of online meetings and lectures, microphone performance has had to evolve as well. The developers harnessed machine learning to remove static noise and enable the microphone to deliver the user’s voice more clearly. Connectivity has been improved in the Galaxy Buds2 as well, with the earbuds being compatible with all kinds of devices, including smartphones, PCs and tablets. 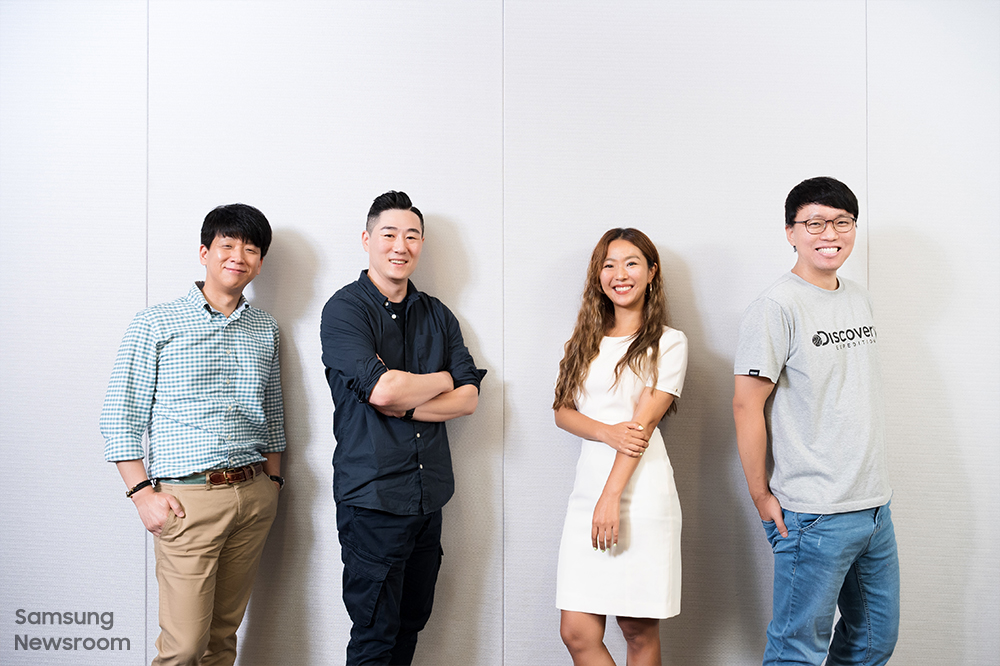 The Galaxy Buds2 also deliver a compact design while not compromising on their stellar performance. By delivering a host of refined equalizer modes, these earbuds are set to raise the bar as far as outstanding listening experiences. On her aspirations regarding the Galaxy Buds2, Yunjin Ham said, “We’ll keep working hard to establish the Galaxy Buds as the sound delivery standard among artists who are making music.”

Global artist and collaborator Charli XCX has also highlighted how the Galaxy Buds2 allow users to adjust their own audio settings and be drawn into the music even further. For more on her collaboration with Samsung, check out the interview below.