The last few decades have seen art and technology intersect at a previously unimagined rate – both for using technology to create art, and also to make art more accessible to the public. Samsung Electronics has been at the forefront of this change, and has now partnered with the Louvre to aid its mission of sharing art with as many people as possible via The Frame and the Art Store.

The Louvre has a fascinating and rich history; a former royal palace, it has been a cornerstone of French history for over eight centuries. Open to the public since 1793, the Louvre’s collections are among the finest in the world, spanning several thousands of years and regions of origin from America to the borders of Asia and beyond. Divided into eight departments, it houses some of most recognizable art pieces in the world, including the Mona Lisa, the Winged Victory of Samothrace, and the Venus de Milo.

Samsung Newsroom spoke with Yann Le Touher, Head of Development, Brand Licensing and Commercial Partnerships at the Louvre, to learn more about what users can expect from this exciting partnership. 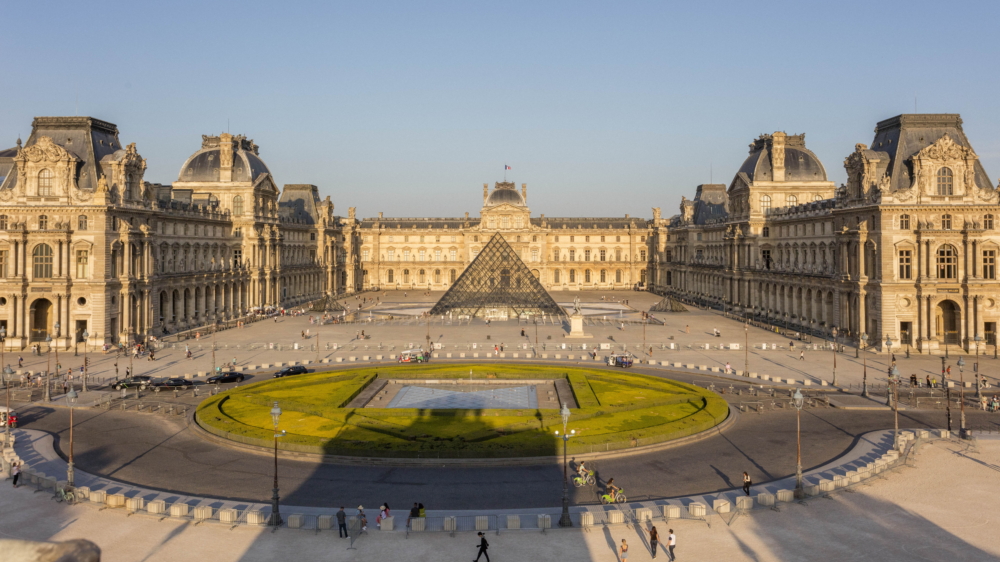 Due to the COVID-19 pandemic, everyday life has been flipped on its head. The arts and entertainment were among the industries hardest hit, but that didn’t stop the public’s yearning to enjoy cultural pursuits. In order to allow people to still be able to experience its collections, the Louvre sought out new and innovative method of sharing art including uploading its entire art collection online.

According to Le Touher, this has been a crucial step in making sure the Louvre accomplishes its main mission of sharing art with as many people as possible. “It is important to share knowledge on as many of the artworks preserved at the Louvre as possible,” highlighted Le Touher. “We believe this online platform, which presents thousands of our artworks, is useful not only to art historians and researchers, but also art lovers.” 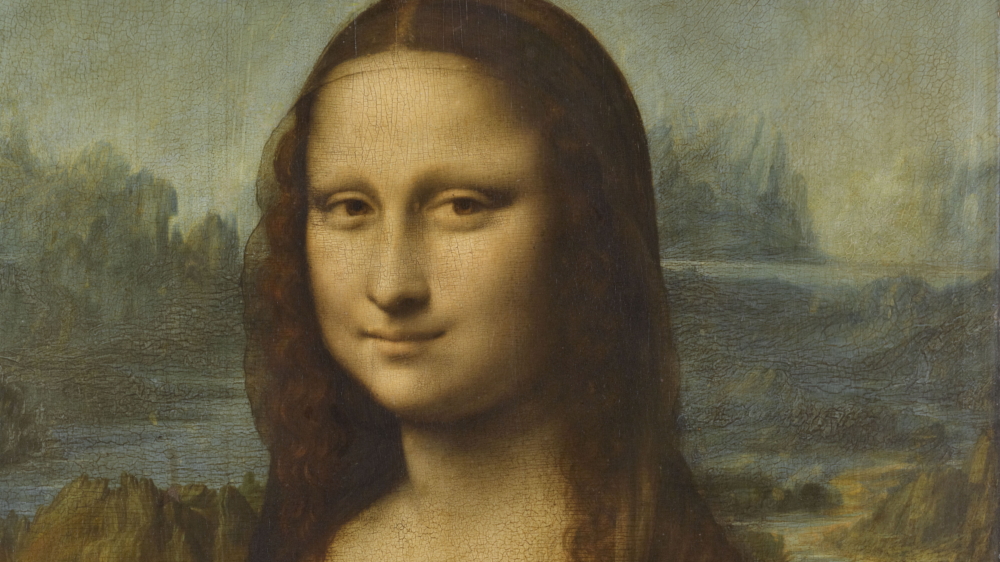 Samsung and the Louvre’s partnership is in line with the goal of bringing artwork closer to art fanatics around the world thanks to Samsung TVs’ pristine picture quality and lifelike images. The Frame is known for its ability to display images that look remarkably like physical prints and paintings, with the screen’s signature Quantum Dot technology making colors more vibrant and contrast sharper. “We were impressed by the features offered by The Frame and were interested in the idea of bringing art into peoples’ homes as well as making it more accessible,” noted Le Touher.

As an iconic structure itself, photos of the Louvre itself are also available, bringing Parisian chic directly to you so as to bring the entire Louvre experience to your home. The Art Store provides access to an expansive range of artworks from world-renowned galleries and museums directly to your home, elevating any living space.

The Louvre has cemented itself as a place of inspiration for artists and art-enthusiasts alike. “The greatest architects, painters, sculptors, and craftsmen not only imagined and embellished the palace, but also lived, worked, and exhibited their work at the Louvre for over three hundred years,” said Le Touher.

In September, the Louvre opened its latest exhibition dedicated to Greek art. This project highlights the cultural, historical and artistic links between France and Greece in the 19th century and shows how the rediscovery of Greek antiquity changed the European view of Greece.

Thanks to The Frame’s ever-growing library of art some of that inspiration can now be yours too. There are 40 pieces of artwork from the Louvre and photographs of the iconic building, available on the Art Store today. 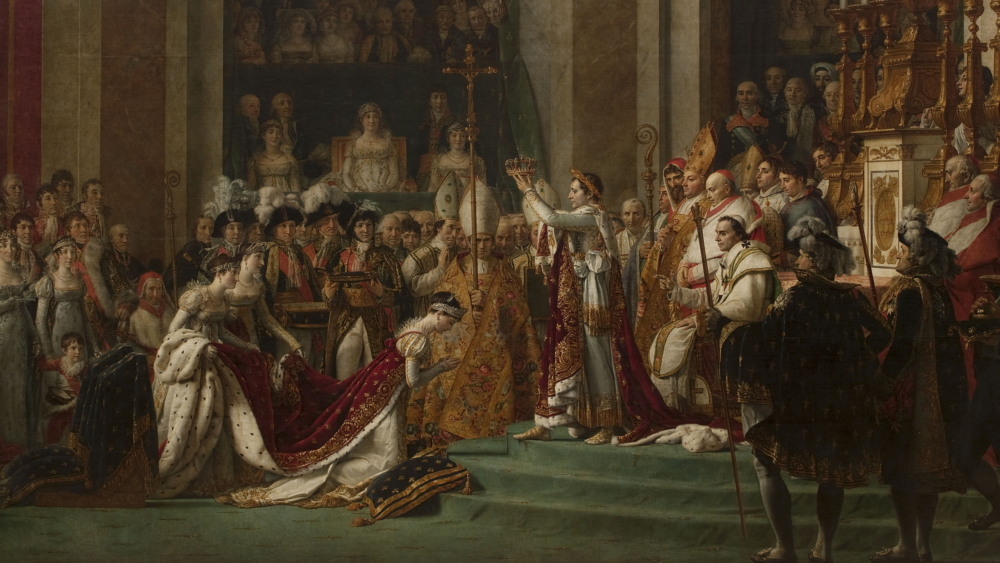 “Our selection of artworks from the Louvre include great masterpieces, such as the Liberty Leading the People, and the Grande Odalisque,” noted Le Touher. “We also want to promote lesser-known paintings that are important and meaningful in art history.” The Louvre and the Art Store partnership has, for example, added the painting Deux chiens de chasse liés à une souche (1548) by Jacopo Bassano, a monumental piece as the first animal portrait in Western painting, albeit less known than works such as the Mona Lisa.

“We are proud to be part of the partners highlighted in the Art Store,” affirmed Le Touher. “Thanks to Samsung’s technology and innovation, we have the opportunity to give people the impression of having a reproduction of their favorite work at home. Obviously, this does not replace a visit to the museum but we strongly believe it can bring inspiration and joy to many homes.” 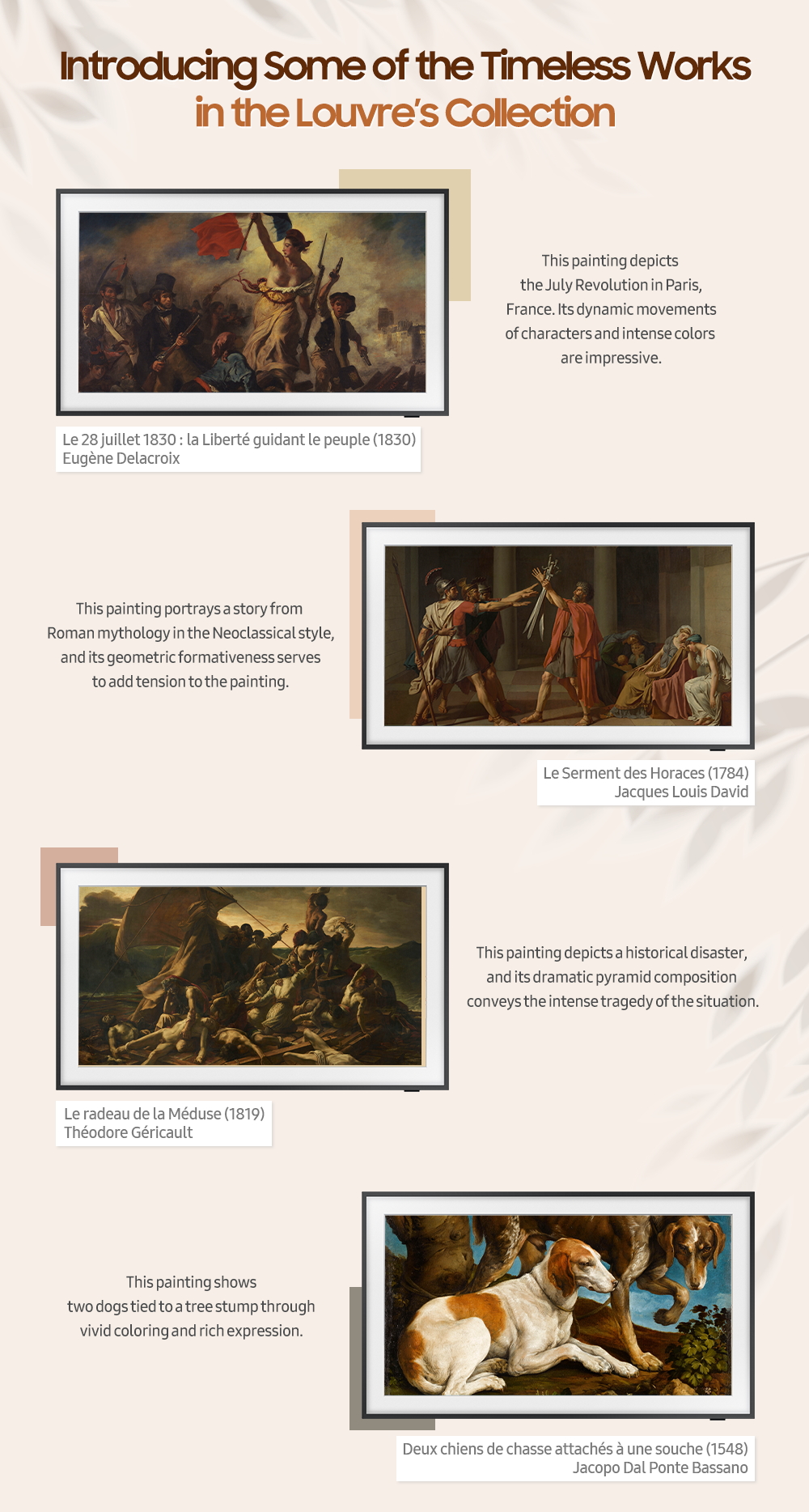