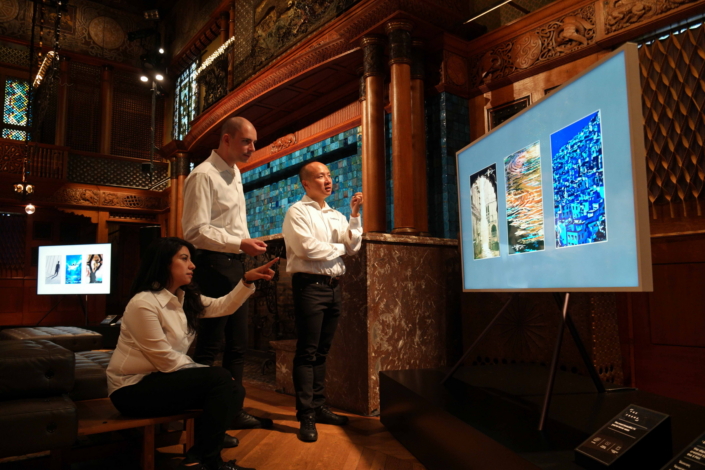 To spotlight the many creative capabilities of the Galaxy Note series’ signature S Pen, Galaxy Unpacked 2017 will feature a showcase of unique S Pen-created artworks presented on Samsung Electronics’ The Frame lifestyle TV.

The venue for the August 23 unveiling of Samsung’s latest Galaxy flagship device, New York City’s Park Avenue Armory, is characterized by antique interiors that reflect its history and tradition. With the showcase, which will feature The Frame TVs lining attendees’ path to the venue, Samsung aims to cultivate a refined atmosphere that harmonizes with the Armory’s distinct ambience.

The Frame will be used to exhibit a total of 54 artworks created by 13 artists whose images are frequently featured on PENUP, a social media platform for sharing S Pen-created art. The images will be presented utilizing The Frame’s dedicated Art Mode, which depicts works of art or the user’s personal photos in vivid detail and automatically adjusts the screen’s brightness to compensate for ambient lighting, as well as the TV’s Smart View function, which allows users to view content displayed on their Galaxy smartphone’s screen on their TV.

In addition to featuring functions that allow it to better showcase content, The Frame’s design also boasts a design that’s meant to complement its surroundings’ aesthetics, including an array of frame options to suit various decors.

About The Frame TV

Launched in June 2017, The Frame is available in 65- and 55-inch models and features a charcoal black body as well as a choice of three frame options – Walnut, Beige wood, or White – designed to suit a range of consumer tastes. The TV’s elegant framing and No Gap Wall Mount, which positions the device flush against the wall, make it easy for users to enhance their living space’s interior by transforming their TV into a veritable work of art.

The Frame earned Samsung the Best Innovation Award at CES 2017 based on its ability to not only present content in vivid detail, but also elevate TVs to the artistic realm by providing a gallery-like viewing experience. This experience is amplified by the TV’s ability to introduce world-famous artworks to consumers’ homes. The Frame makes it easy to compile a collection of stunning works of art by purchasing images of iconic photos and paintings – either through the device itself, or via the accompanying Art Store mobile app.