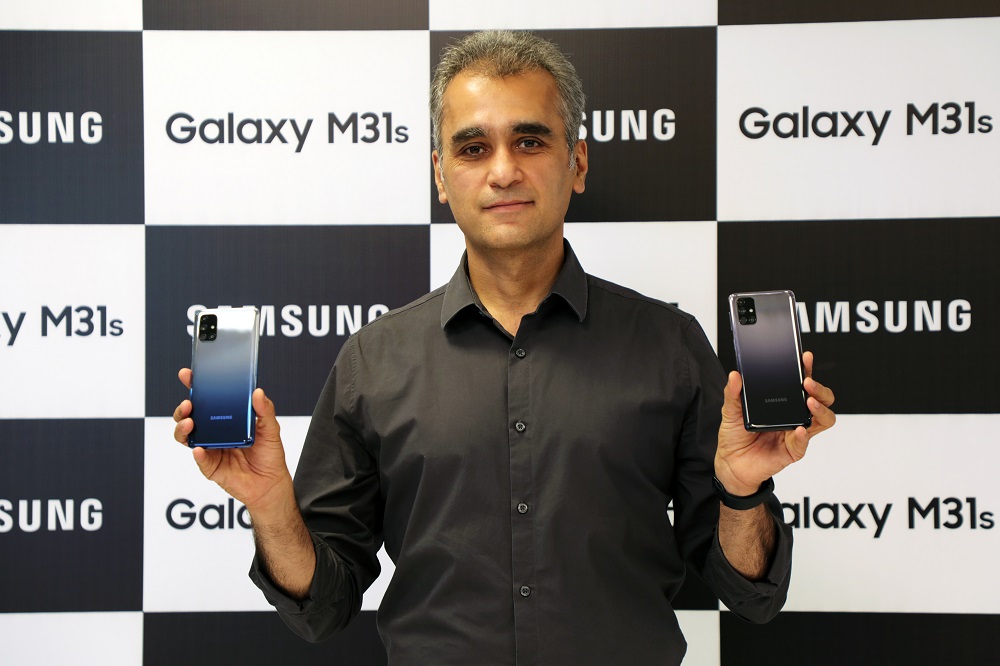 “The Galaxy M series has been designed ground-up in India and we are grateful to our consumers for making the brand so successful in such a short time. With Galaxy M31s, we are aiming to redefine camera experience for young consumers. We are confident that Galaxy M31s, with its 64MP Intelli-Cam and Single take feature, will truly set the benchmark for camera performance in the mid segment,” said Asim Warsi, Senior Vice President, Samsung India.

Galaxy M31s sports a 64MP quad-camera setup, with the new sensor doing an incredible job of taking pictures that have depth, detail and definition. Galaxy M31s’ 12MP Ultra-Wide lens has a 123-degree field of view for capturing the world as you see it. Galaxy M31s also has a dedicated 5MP Macro lens for close-up shots of objects that you love. The 5MP depth lens is capable of taking amazing portrait shots with live focus. Galaxy M31s has amazing video capability with 4K recording and it supports hyperlapse, slow-mo and super-steady modes. In addition, Galaxy M31s has a dedicated night mode for great low light photography. The 32MP front camera also supports 4K video recording and slow-mo selfies. Galaxy M31s combines powerful camera hardware with Intelli-Cam features to elevate the camera experience to a whole new level. The Intelli-Cam features in “Single Take” set a new benchmark in camera experience.

For many consumers, the choice of video versus still photo can lead to their missing the key moment altogether. The “Single Take” feature takes the pressure off those split-second camera decisions, as it harnesses AI to capture different versions of the same moment. With “Single Take”, all you have to do is press record at the right moment and Galaxy M31s will capture the footage, up to 10 seconds of it, and then use AI to produce up to 10 different outputs – 7 photos and 3 videos. Therefore, just a Single Take gives you multiple outputs, including photos with applied filters, Smart Crop and video formats in Boomerang and Hyperlapse. With Galaxy M31s, you get a #MonsterShot with outputs that are ready to share and will help millennials ace their social media game. The Single Take feature is available on both the rear and front cameras.

Galaxy M31s’ Intelli-Cam comes with many other interesting features. 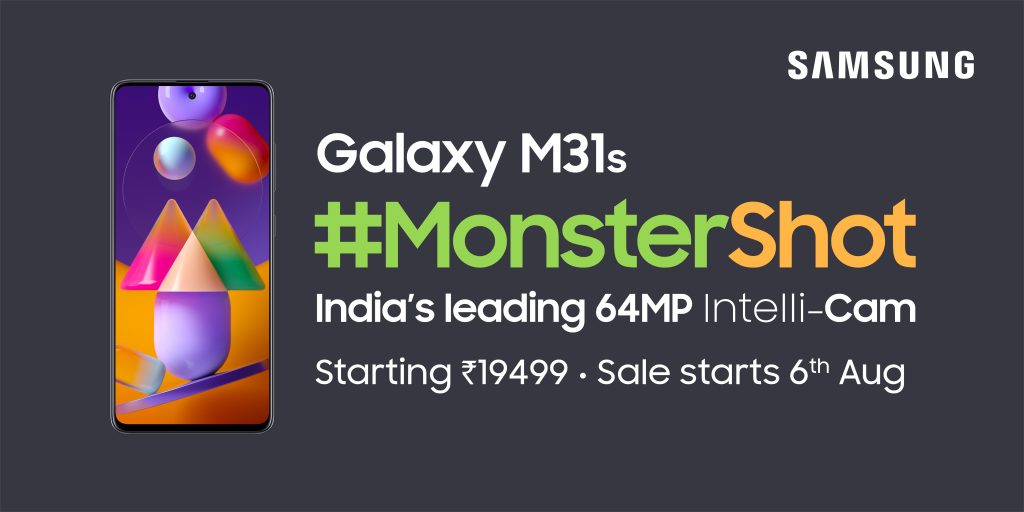 You can now customize your photos with Custom Filter. With this feature, you can imitate the colours and styles of your favourite photos and apply them to new photos as you take them. Each filter you create will be saved in the Camera App for future use, so you can always use it again later. Users can create up to 99 filters.

With this mode, you’ll be able to pack all the fun into one frame automatically as the camera recognizes if you are taking a group selfie. This feature is perfect for those moments when you want to fit everyone in — or just yourself with that beautiful, eye-catching backdrop.

Using this feature, you can switch between front and rear cameras during video recording.

Samsung’s advanced low light technology gives you the ability to shoot videos with long exposure-style captures, so your videos feature striking light trails. As a result, you can now take hyperlapse videos in Night Mode. 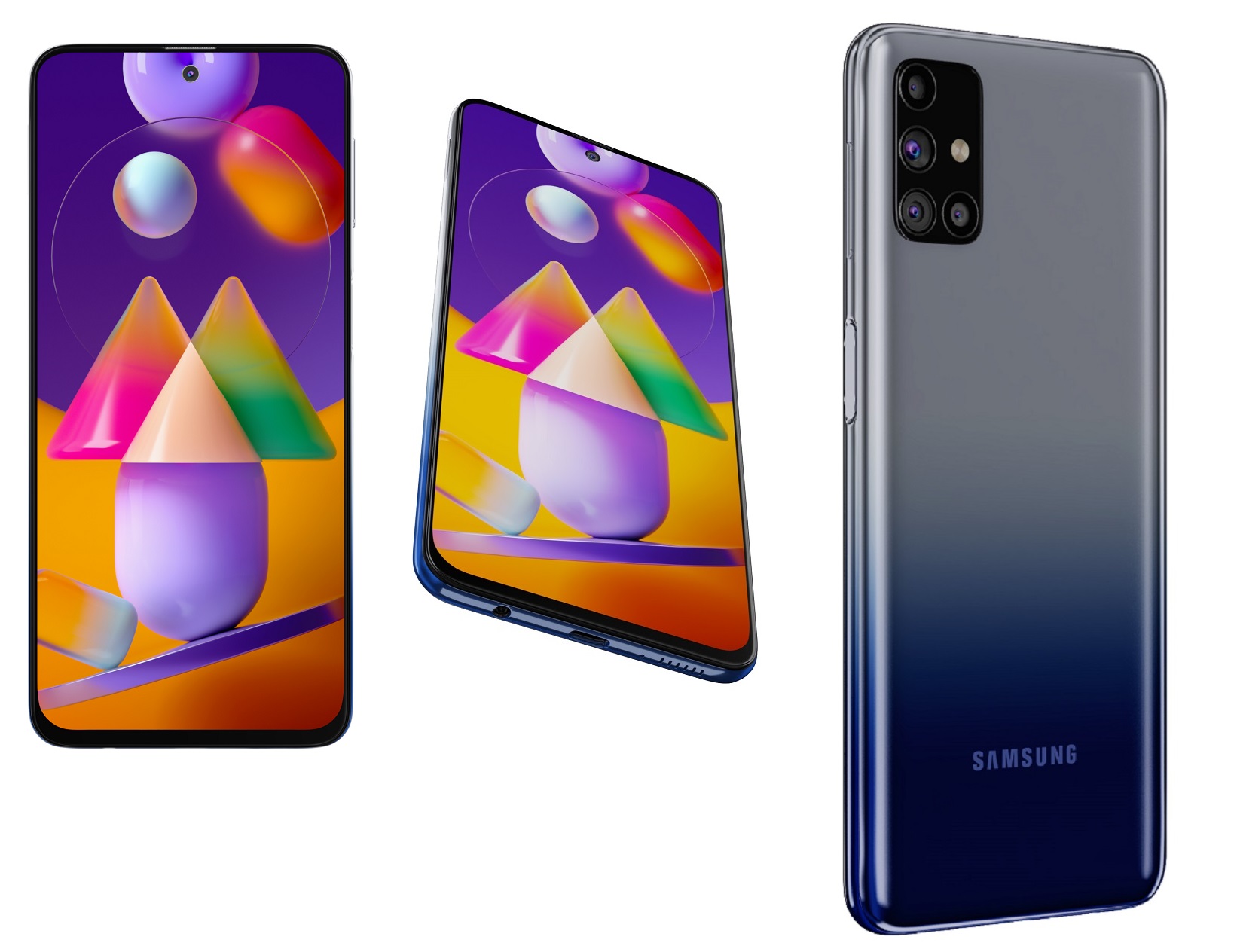 Galaxy M31s sports a gorgeous 6.5″ super AMOLED Infinity-O display that produces stunning colors. It also comes with Widevine L1 certification that enables consumers to watch high definition content across streaming platforms. Galaxy M31s uses industry-leading 6000mAh battery that can easily last the entire day and night. It also comes with an in-box Type C 25W fast charger. The M31s for the first time also has reverse charging as it comes with a Type C to Type C cable for the 25W In-box charger and allows millennials to share their power on the go.

Galaxy M31s also comes in premium Gradient design, which will appeal to young millennial users. It comes with side finger print scanner and fast face unlock. Galaxy M31s will run on Android 10 out of the box with Samsung’s new One UI for a smooth, lag-free experience.

Galaxy M31s will come in two memory variants – 6/128GB and 8/128GB and will be available at Amazon.in, Samsung.com and select retail stores from 12 noon on August 6.