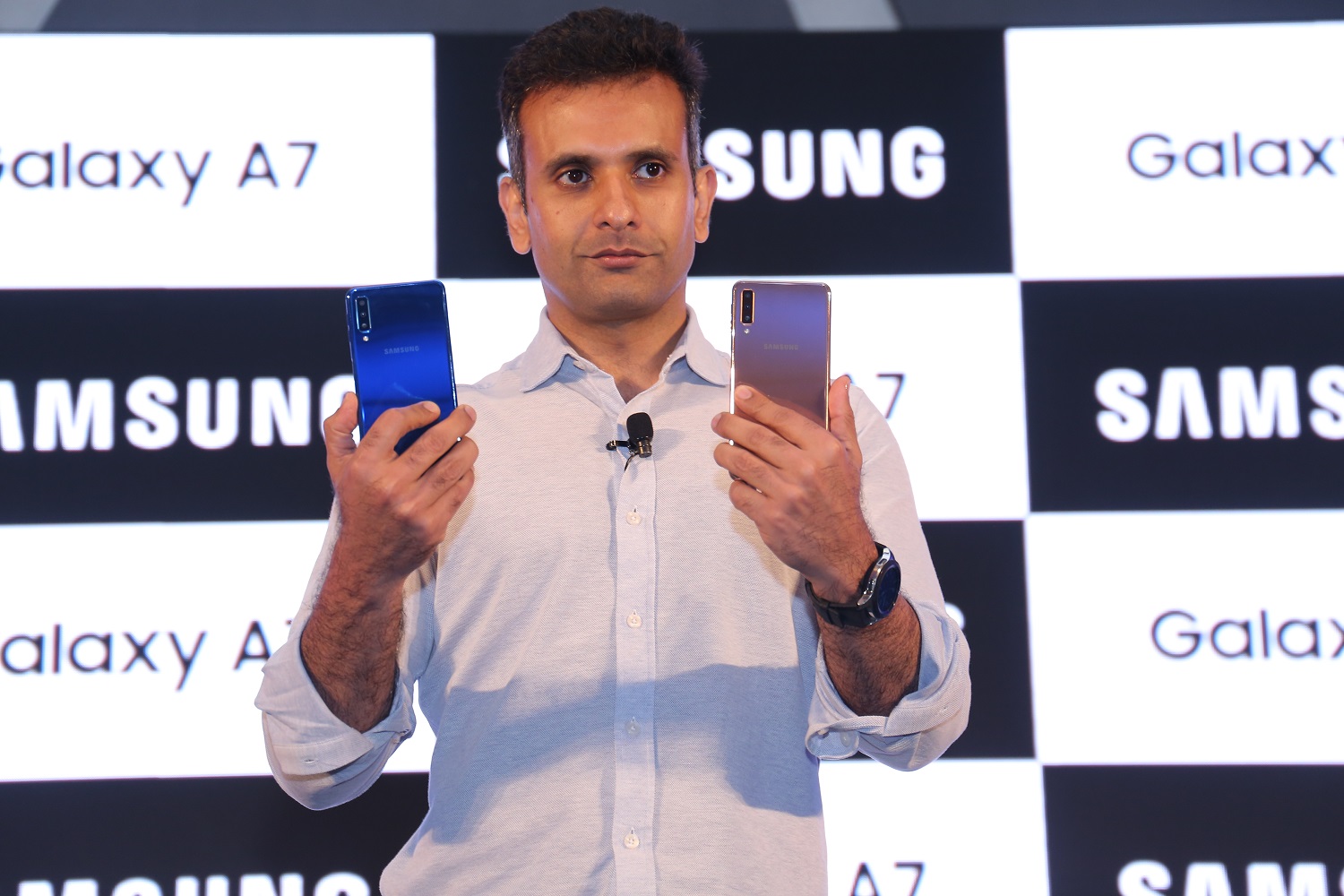 Sumit Walia, Director, Mobile Business, Samsung India during the launch of Galaxy A7 in New Delhi

Galaxy A7 has been developed based on the consumer insight that nearly half of the Indian millennials use their smartphone cameras daily and their rear camera twice as much as the front camera. In the new triple camera set up, there is an additional 8MP 120° Ultra-Wide Lens, which has the same viewing angle as the human eye. This allows users to capture unrestricted wide-angle photos exactly like what one can see.

The 24MP primary and selfie cameras also feature a new technology – Pixel Binning that allows the device to intelligently detect low light conditions and combine four pixels into one ‘Super Pixel’ for crisp and clear shots in the dark. The 24MP primary camera coupled with 5MP depth lens powers Live Focus feature that controls the depth of field by allowing users to adjust the effect both during and after clicking photos. 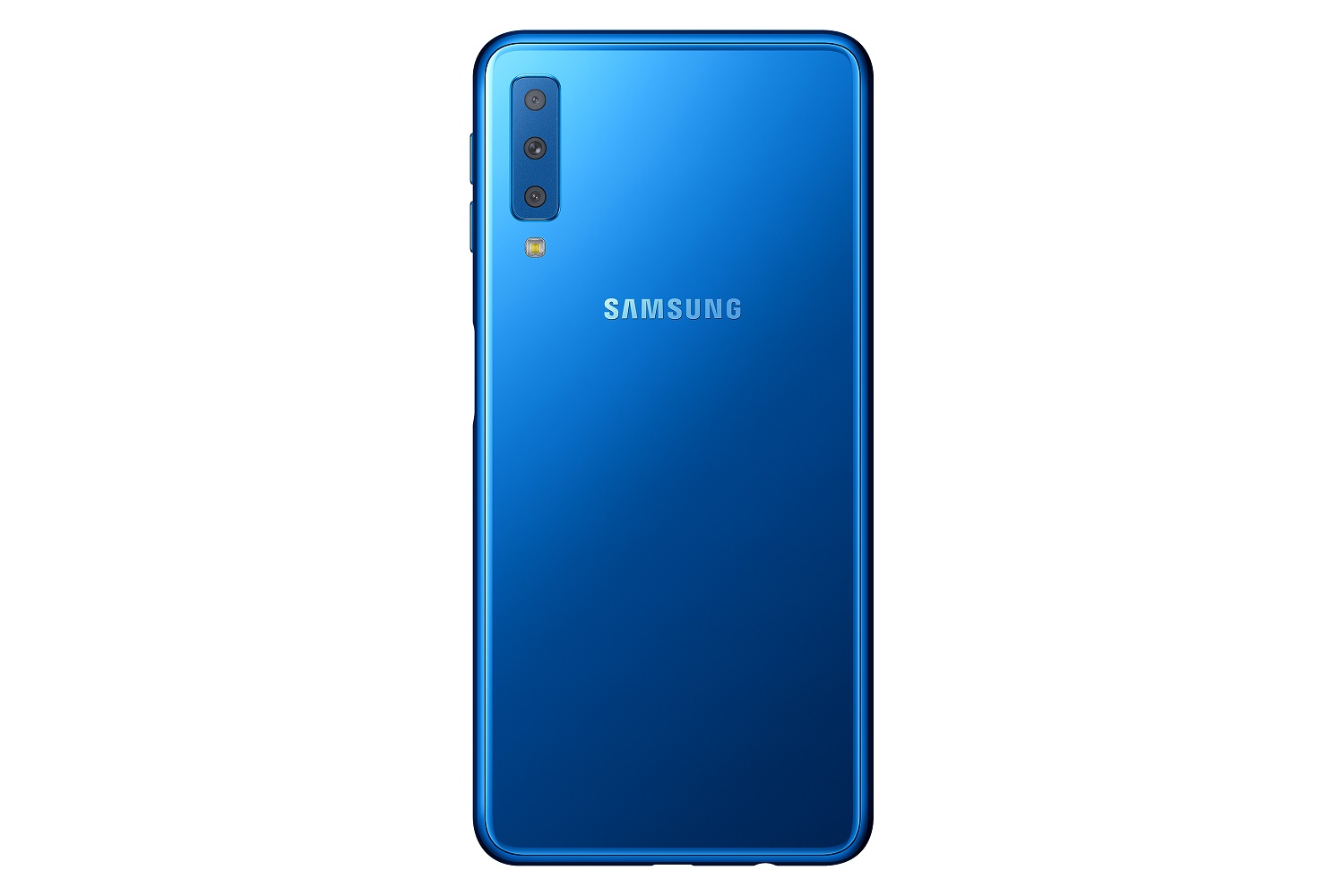 Built on the insight that more than 40% of millennials edit their images prior to using them on social platforms, Galaxy A7 is also power packed with exciting intelligent features. Galaxy A7 camera gets a scene optimizer that automatically detects any of 19 different scenarios such as food, flower, or sunset, etc. and optimises each shot for the best picture composition. Consumers can enhance their instant messaging experience by creating customized avatars using the ‘AR Emoji’ feature by taking a picture of themselves with the selfie camera or a friend with the rear camera. They can choose from a set of GIF images for a more fun and emotive experience. The 24MP selfie camera also has a ‘Pro-Lighting’ feature where images can be edited with multiple lighting settings to deliver a distinct and professional look akin to a studio photo shoot.

“There is innovation and something new in every facet of the Galaxy A7 starting with the triple camera lens to power ultra-wide shots and intelligent features that ensure the best picture composition. The True FHD+ display with Super AMOLED Infinity Display and Widevine L1 certification delivers a superlative viewing experience.  The bold new colours and a side fingerprint sensor deliver a refreshed design. We are confident that with this device, we will capture the imagination of the Indian millennial and be able to add to the celebrations during the festive season,” said Sumit Walia, Director, Mobile Business, Samsung India. 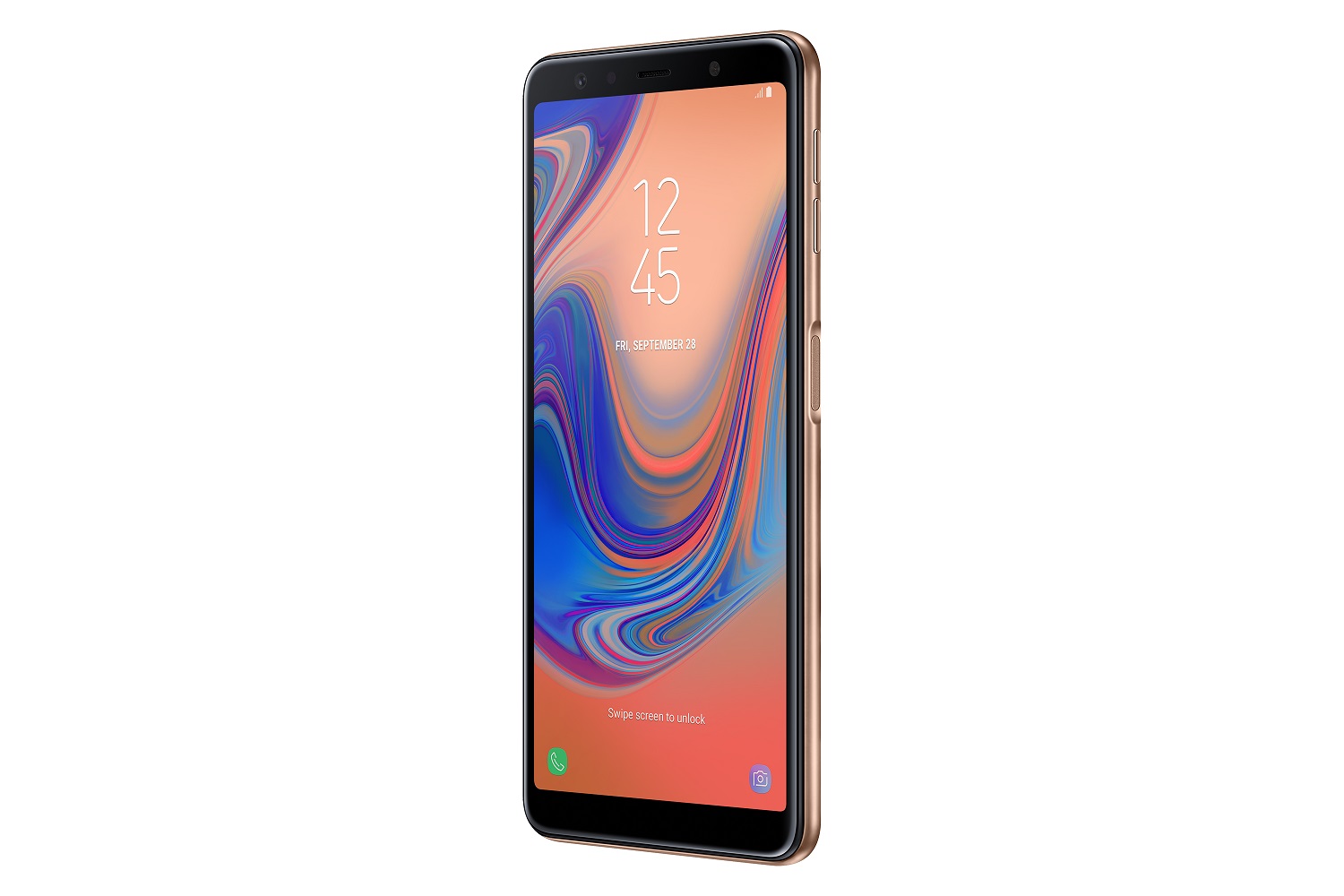 Featuring a 6.0-inch FHD+ Super AMOLED display, Galaxy A7 along with Samsung’s signature Infinity Display allows users to make the most of uninterrupted, immersive viewing. The True FHD+ display is powered by a Trust Zone technology processor that enables Widevine L1 certification, thus ensuring all popular streaming apps allow HD content to stream seamlessly on Galaxy A7. In order to make this device a true audio-visual delight, it also supports Dolby Atmos® immersive sound technology that brings true HD content to life. Galaxy A7 is an absolute style statement with a 2.5D glass back design, 7.5mm slim body, and a side fingerprint sensor where the sensor has been integrated into the power button for a clutter-free design.

Galaxy A7 will further strengthen Samsung’s leadership in the mid-range segment, which has been bolstered by the recent launch of Galaxy J6+ and Galaxy J4+. The devices come in just ahead of the festive season, thus adding to the consumer delight.

Galaxy A7 also packs a punch when it comes to performance. Galaxy A7 is powered by a Samsung Exynos 7885 2.2GHz Octa Core processor. The device will be available in 6GB RAM/ 128GB ROM and 4GB RAM and 64GB ROM variants. This can be enhanced with a 512GB expandable memory and Samsung’s industry-first ‘Install Apps to Memory Card’ feature. The device is powered by a 3,300mAh battery and runs the Android Oreo operating system.

Consumers can avail exciting cash backs worth INR 2,000 when they make a payment through HDFC bank credit and debit cards.

The highly anticipated Galaxy A7 is slated to launch by September end across over 180,000 outlets. In order to give consumers early access, the device will be available on September 27 and 28 for a special preview sale on Flipkart, Samsung e-shop, and at Samsung Opera House in Bengaluru.