How C-Lab is Preparing for a Future Full of Potential Part 2: C-Lab Outside

Nine teams from Samsung C-Lab will participate in CES 2020, where they will present their ideas to users and gauge how they are received. Continuing on from Part 1, which was about the teams participating in C-Lab Inside, Part 2 will focus on the four teams selected to participate in the current incarnation of C-Lab Outside.

2020 marks the first year that the start-ups accepted to participate in C-Lab outside will be featured at CES. Leveraging the success of the C-Lab Inside initiative, C-Lab Outside has been expanding Samsung’s support for new ventures to start ups and innovations outside of the Samsung network since 2018. The program provides financial support, business collaboration and chances to participate in global exhibitions for new entities with the goal of energizing the start-up ecosystem and creating more IT and technology-driven jobs. 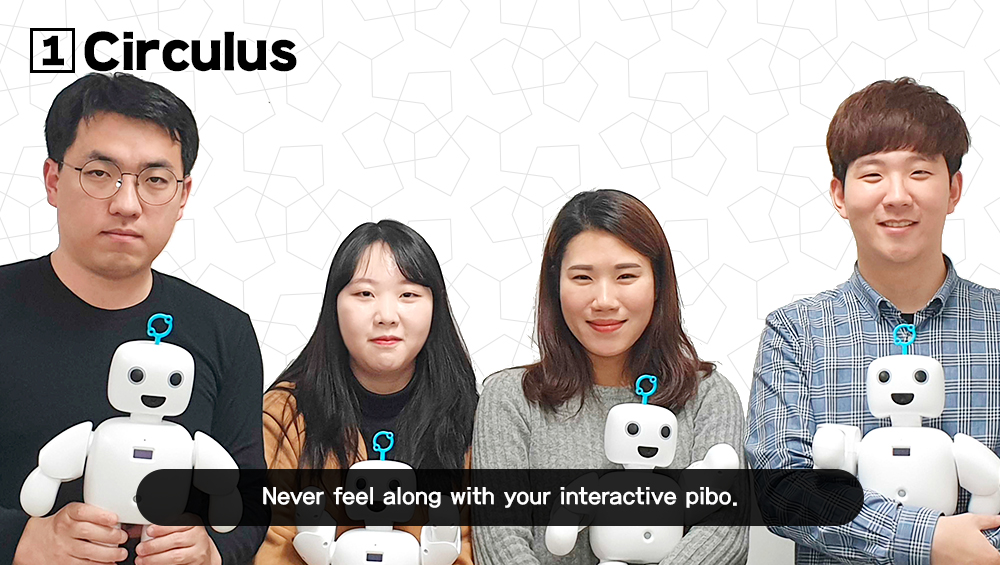 The number of homes populated by just one person is expected to skyrocket in the near-future, with more than 120 million new single-person households expected to be added globally between 2016 and 2030. This demographic will be created by young singles prioritizing their careers over relationships, as well as by the expanding widowed and divorced elderly group, which is especially significant in developed countries. From these shifting demographics emerge pressing concerns regarding loneliness, isolation and a host of other social problems. Thus, team Circulus has introduced its household pet robot ‘pibo’ to try and help address this issue. Asked about the meaning of their team name, team Circulus related that “Circulus is Latin for circle. The word also contains ‘us’, which stands for ‘let us help each other.’”

Pibo balances people’s emotions via communication. It is versatile, offering basic conversation, guidance services including news and weather information, and a voice search function. The humanoid robot analyzes the user’s facial expressions and dialogue in order to best interact with them, delivering conversation, well-known sayings, turning on music or starting to dance depending on how the user is perceived to be feeling. Unlike a smart speaker, pibo doesn’t wait for you to speak up first, and will often initiate conversation when you walk past. Users can also share memories with pibo, using it to share memories, photos and voice diary entries. What’s more, users can update their pet robot with new features by downloading them from the robot application store. Pibo can be customized specifically for you as you make use of its advanced capabilities and tailor its functions to your preferences.

“We’d like to introduce pibo to the world at CES 2020,” said a member of Circulus, “As the US, Europe and Japan are all experiencing an uptick in one-person households, pibo can be a great friend to those who are alone.” 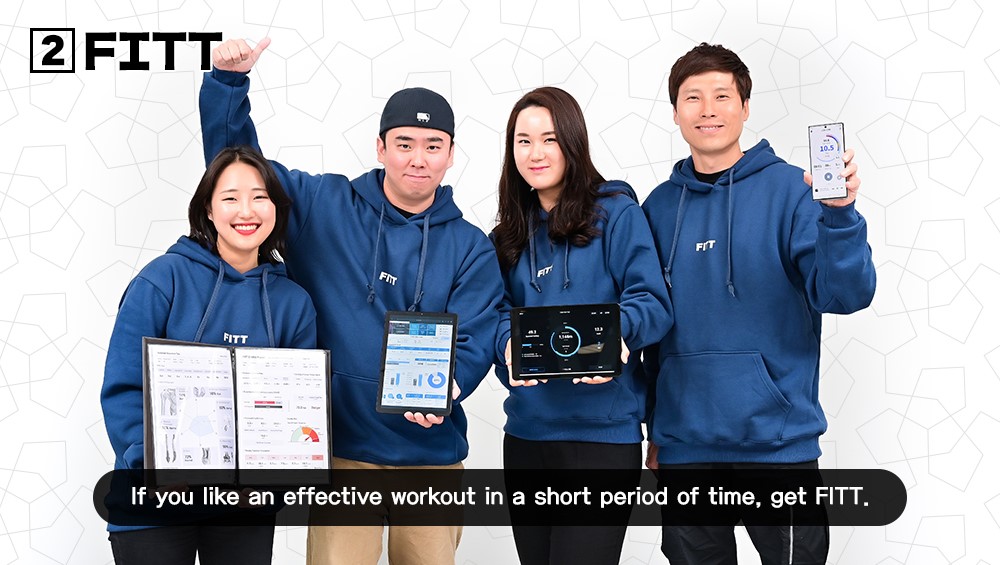 Generally, if you want a personalized exercise plan, you must first undergo a medical examination. However, going to the hospital to put on a mask and run on a treadmill represents a daunting task to many. FITT is a PHR (Personal Health Record) healthcare data platform that was created to positively influence people’s health via easy-to-use exercise evaluation software. When asked about the meaning of their team name, team FITT explained that “Our team name is an abbreviation of the four major elements of exercise planning: Frequency, Intensity, Time and Type.”

FITT starts out by measuring your maximum oxygen intake while you complete a 2.4km running exercise through the FITT app. This test allows the program to produce four one-page reports containing professional-level data regarding the user’s body and physical condition, as well as a fitness program that is tailor-made for them. Within the program FITT issues a customized cardiorespiratory exercise plan, recommending how far users should run, how fast and for how long, as well as a customized posture and muscle strength exercise plan. Once users complete the fitness test, FITT can even predict diseases that the user might be susceptible to, including high blood pressure, diabetes, cancer, stroke, heart attacks and cardiovascular disease, among others. If the system identifies that a user is at risk for one or more of these conditions, it will recommend further preventative activities for them. FITT is currently being provided as a web service in select fitness centers, but will be made widely available once the FITT app launches in March of 2020.

“Exercise works best when it is customized for the individual and done in a controlled environment,” a member of team FITT commented, “I hope our ‘exercise evaluations’ help users find out which kind of exercise routine is the best fit for them.” 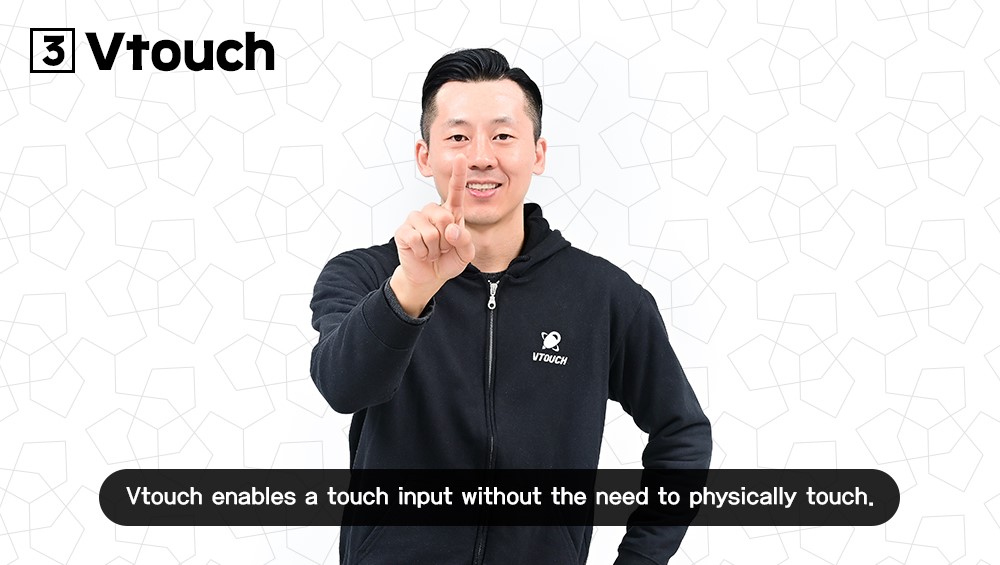 These days, people use a lot of different devices, with a broad range of different features. In light of this, Suk-jung Kim of Vtouch says he feels that “new ways to interact with devices should be emerging as well.” The conventional input methods these days include either using a touchscreen or interacting with a cursor, but these methods can be prohibitive for users with limited mobility or children who cannot always reach up high enough to interact with devices. Asked about the meaning of their team name, team Vtouch reported that “It means ‘virtual touch’, which communicates the fact that our solution can bring about a ‘touch’ input without the need for physical contact.”

Vtouch’s concept focuses on the fact that whenever you point at an object, your eyes, finger and the object you are pointing at are aligned. The technology enables a non-contact touch input by using computer vision and deep-learning technologies to analyze the movement of the eyes and finger through a camera. Vtouch allows for more sanitary use of devices by removing the physical touch element, and maintains a recognition rate of over 99 percent, with an error margin of just 5 percent of the distance between the user’s hand and the display. As the intuitive technology only requires a camera and processor to work, it can be implemented in a wide range of sectors including automotive, IoT (smart home) and digital signage.

“At first, Vtouch was too expensive to mass produce,” a member of the Vtouch team relates, “However, with the help of various researchers and developers we have been able to bring the price down to where it is now cheaper than most touch panels. We are hoping to implement our solution in multiple environments soon in order to provide a convenient, inclusive experience for users.” 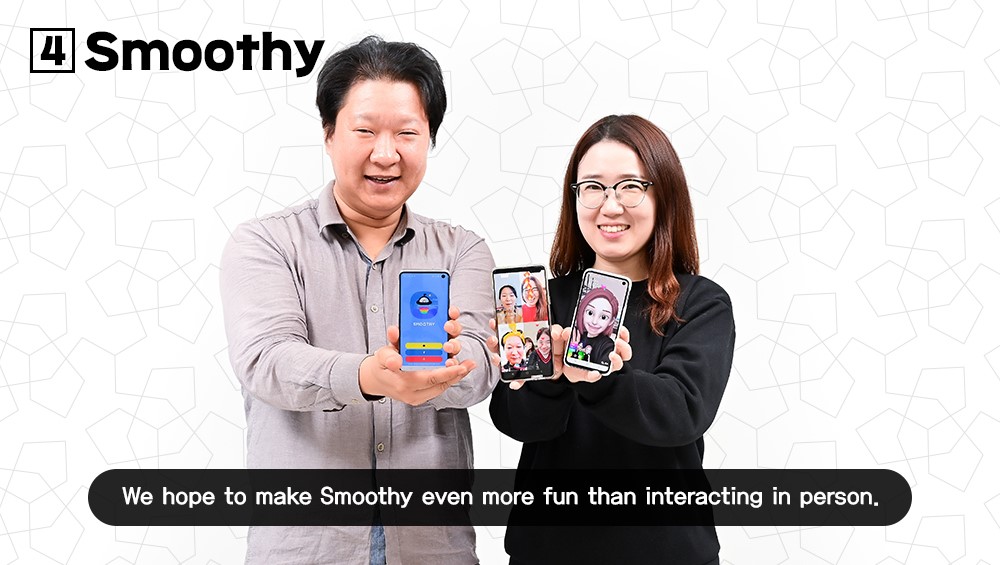 We are living in the era of video-first, and video calls are great for allowing you to talk to loved ones face-to-face without actually being in the same place. However, video calls aren’t appropriate for all situations. If someone video calls you in a quiet place like the library or the subway, or if you want to talk about something private, video calls are less than ideal. Thus, the Smoothy team set out to create a video call app that would address these inconveniences. By incorporating text elements into the video calling interface, while also allowing people to incorporate large groups into their video calls, Smoothy has attracted more than 850,000 users already. Commenting on their team name, the members of team Smoothy related that “Our name implies the smooth combination of video, voice and text during video calls. It also means togetherness while expressing yourself, wherever you are.”

When you answer a call on Smoothy, the call is initially launched in silent mode, meaning that you can answer a video call, anytime, anywhere. Smoothy allows for large group video calls as well, enabling up to eight people to participate in a video call at once. From there, you can either talk normally, or chat with real-time texting, with your texts appearing in the call window as you type. Although we are living in the world of video, most people still communicate through text messages, and the world of texting is brought to life when you can see your friend’s reaction in real-time right before your eyes. Smoothy even allows you to quickly and conveniently capture video clips and send them to friends, enabling whole conversations to unfold through snippets of video. Unlike other video call apps, Smoothy enables you to decorate yourself with features such as AR Emoji, allowing for more fun video chats. When you are in a video chat with more than two people, Smoothy even allows you to visualize your reactions with next-level features such as a lightning effect and a function that allows you to cause other participants’ displays to shake.

“Firstly, we would like to provide a video call app that is fun to use,” reported a member of team Smoothy, “And secondly, we want to deliver an app that enables a wide range of effects and interaction styles.”