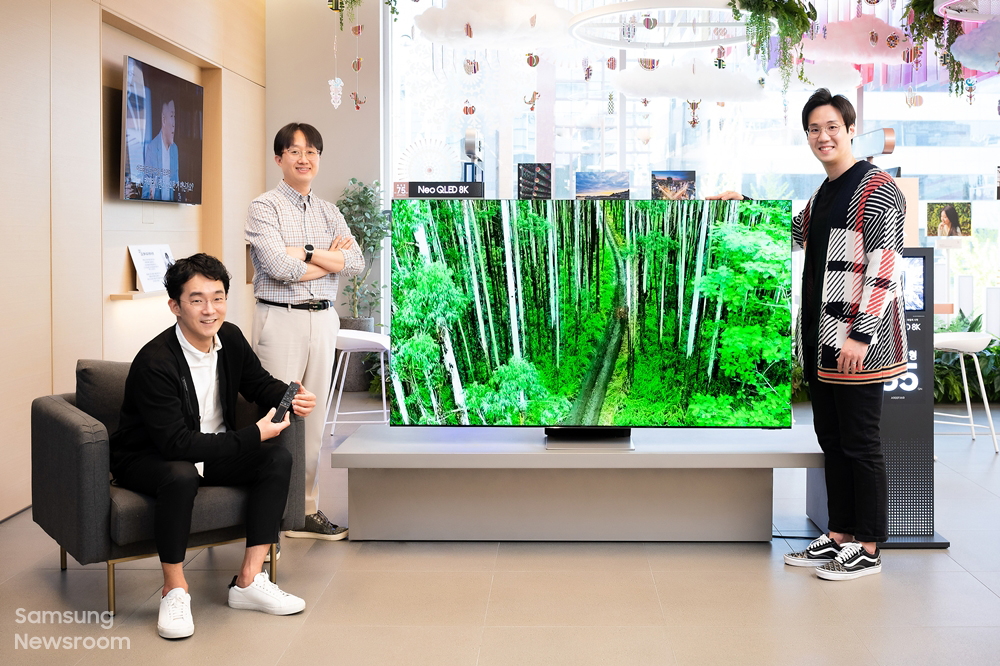 Did you know that out of the more than 50 million1 tons of electronics that are thrown away each year, only a mere 17 percent is eventually recycled? Most of this ‘e-waste’ ends up polluting the environment by sitting in landfills or being incinerated. With annual e-waste expected to reach as much as 74 million tons by 2030, the global community has started taking steps to reduce consumption and minimize waste.

Driven by a desire to keep our planet clean for generations to come, Samsung Electronics regularly engages in eco-conscious efforts that are helping to establish a circular economy. The company is constantly exploring ways to reduce its products’ impact on the environment, including increasing products’ lifespans and spearheading efforts to recycle their resources.

Samsung consistently pursues innovations that allow it to make its products more environmentally friendly. Recently, the company added an eco-friendly touch to one of consumers’ favorite appliances by developing a remote control that’s made using renewable plastic and powered by photovoltaic energy rather than disposable batteries, as well as TV packaging that can be reused as small furniture. Samsung Newsroom recently sat down with members of the team behind the innovations that are making Samsung TVs more sustainable.

“Supposing that a typical TV is used for around seven years, changing the batteries in its remote just once a year would mean that 14 batteries would get used and thrown out,” said Kwanyoung Kim, an engineer. If we apply that number to Samsung Electronics’ expected annual global TV sales, it amounts to approximately 99 million discarded batteries. If we apply it to annual TV sales overall, it adds up to nearly 3.1 billion batteries.2 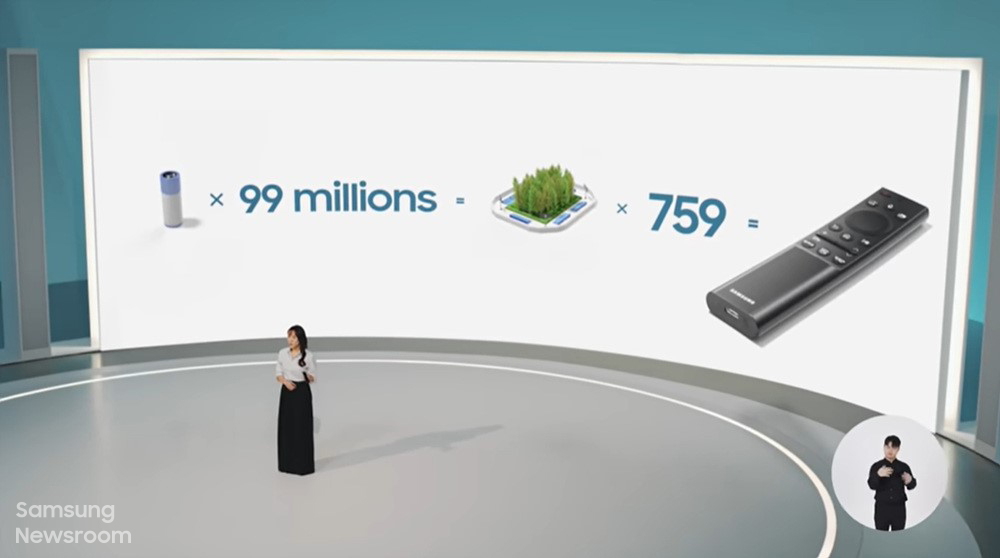 Rather than using disposable batteries in the remote, the engineers decided to go with a self-charging battery instead. Many charging methods were considered, including one that harnessed the kinetic energy that’s created when the remote is shaken, and one that utilized the vibrational energy that’s created when the microphone picks up sounds. As Kim explained, at the end of the day, the optimal charging solution turned out to be a solar cell.

“Even when we aren’t watching our TV or using our remote, we usually have the lights on, except when we are sleeping. This makes light an easily accessible charging solution,” said Kim. “If we substituted disposable batteries with self-charging solar cell batteries like the one we’ve developed, it would amount to reducing up to around 6,000 tons of greenhouse gas emissions per year.”

How exactly does the remote control generate energy from the fluorescent lights in our living rooms? Put simply, its solar panel takes in photons from light, which react with the electrons in the solar cells to create electricity. The difference between outdoor panels and indoor panels is the spectrum of light being used. “You can’t get as much light indoors compared to sunlight,” added Kim, “so we decided to utilize solar cells that generate energy even in low-light indoor environments.”

The engineers succeeded in increasing the remote control’s energy efficiency by reducing its power consumption by 86 percent.3 They did this by taking users’ TV watching patterns, the number of times they pressed their remote control’s buttons, and usage time into account. As Kim explained, the solar cells in the final product “can provide up to 70 percent of the power used by the remote control.” 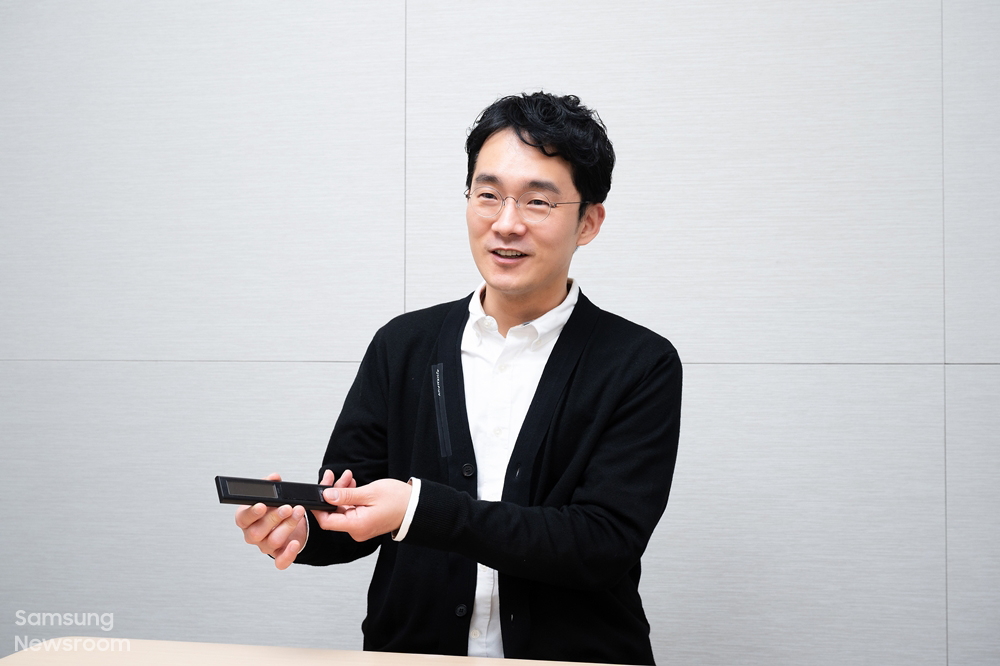 Making the design of the typical TV remote control, which has remained unchanged until now, more sustainable was no simple task. The color of the solar panel was already determined, so it was difficult to apply various colors to the remote control’s design. One of the team’s key concerns was that the remote control’s panel would need to be raised up high in order to be charged via light. “The solar panel itself is gray, so if we used a color other than black for the battery, it wouldn’t go well with the overall product design,” said Kim. “We also needed the design to encourage consumers to do their part to help the environment.”

Solar panel technology isn’t the only thing that makes Samsung’s new remote control especially eco-friendly. Indeed, the plastic material used to create this roughly 40g device is comprised of 28 percent recycled plastic. Samsung has been utilizing recycled plastic in its products for a long time, and has received various certifications for its eco-friendliness. Now, the company has expanded its scope by applying recycled materials to accessories like remote controls as well.

Recycled plastic is enticing because it reuses resources, but not everything about it comes easily. For a start, unit prices go up during the manufacturing process. While Samsung’s VD business does utilize plastic waste that has been collected in Korea, the volume is so small that additional resources need to be imported from overseas. This process causes costs to go up by five percent at the least, and 10 percent at the most. 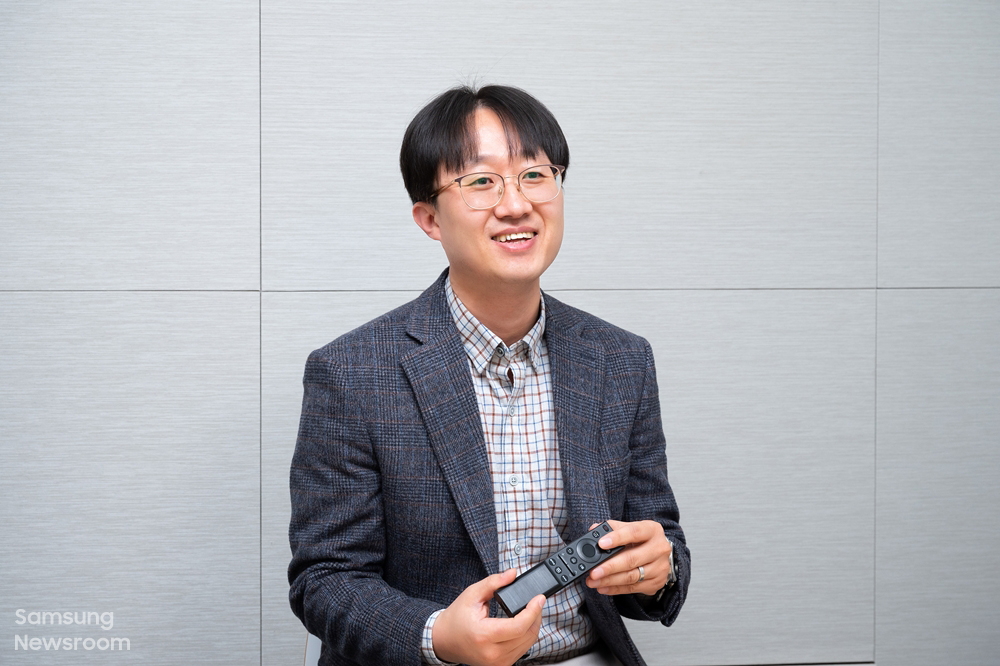 Despite those costs, Samsung is committed to increasing its usage of recycled materials based on their clear eco-conscious benefits. According to Life Cycle Assessments (LCA), a methodology for assessing environmental impact, products made using approximately 28 percent recycled plastics emit 31 percent less CO2 than products made from non-recycled plastics.4 In an effort to maximize its use of eco-friendly materials, Samsung also explores ways to utilize waste that has been thrown indiscriminately into the sea. “Twenty percent of the waste that gets thrown into the sea is made of Polyethylene terephthalate,” said Han. “The marine waste plastic obtained here is called OBP (Ocean Bound Plastic) material, which can be applied to the exteriors of electronics. Using OBP in this way helps discourage marine pollution while promoting efforts to protect the environment.”

Samsung currently utilizes recycled plastics when producing many products, including not just its new, solar cell-powered remote control, but other remote controls as well. Eco-conscious materials are used in the company’s monitors, signage stands, and back covers, too. “In the future, the use of recycled materials will be expanded to include more Samsung TV products,” said Han. “With 2030 being the year when we hope to reach our ultimate achievement, we will keep increasing our use of recycled plastics each year.”

The TVs’ eco-packaging first began as a project of C-Lab, Samsung’s in-house startup incubation program. The C-Lab developers were wondering how best to recycle TVs’ packaging when they noticed that Serif TV users were placing their set-top box, small furniture, and electric devices under their TV as if it were a cabinet. This led them to the idea to use TVs’ strong cardboard packaging to make small, long-lasting furniture, which became the foundation for a new type of ‘eco-packaging.’ 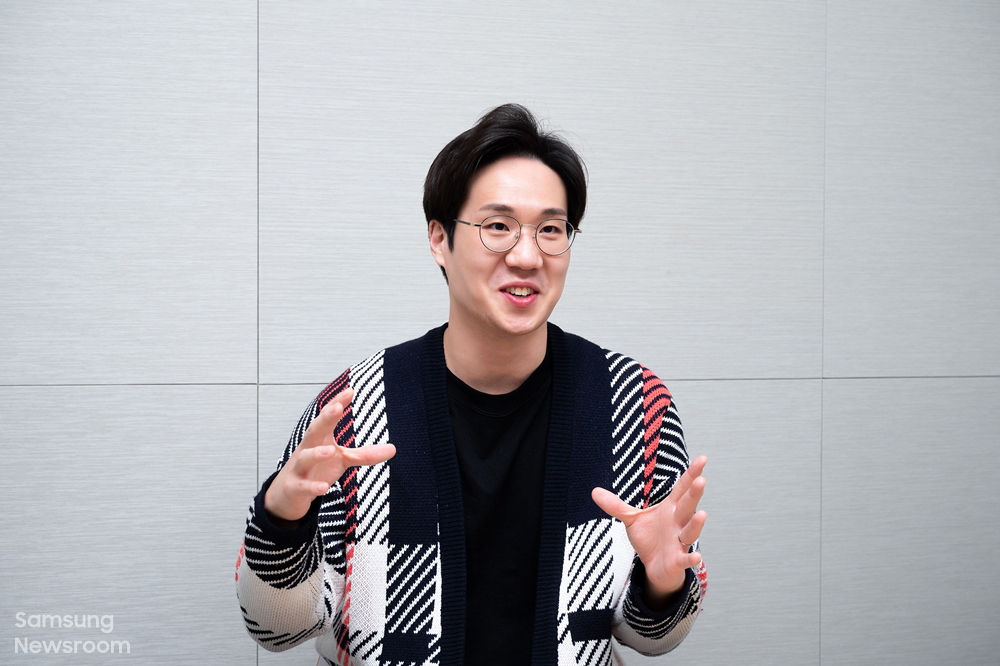 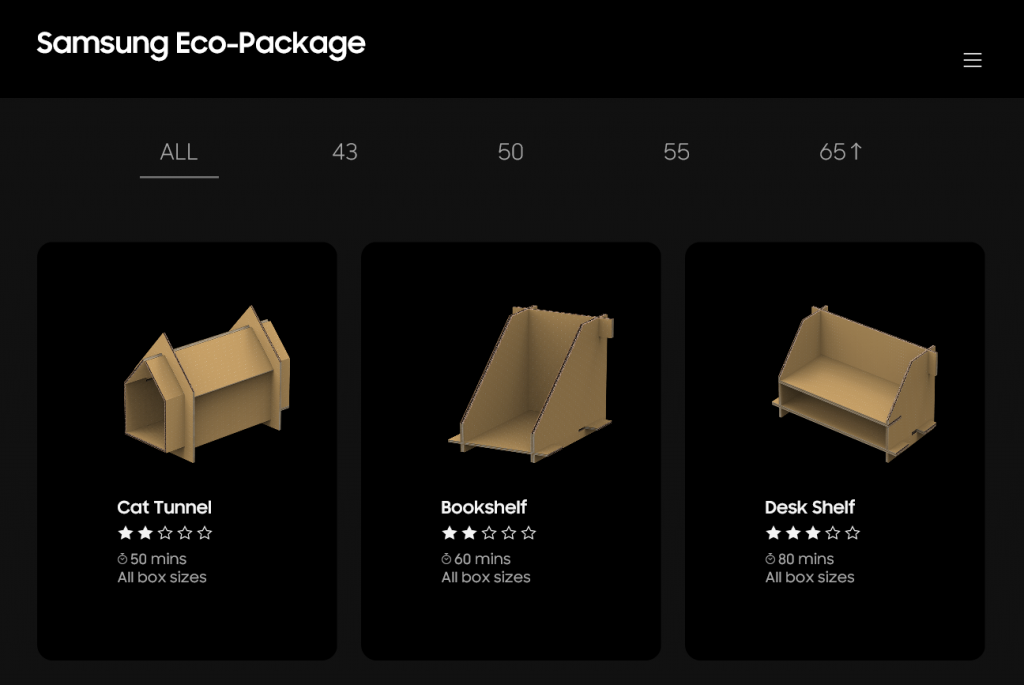 Samsung’s safety- and environmentally conscious eco-packaging has gone beyond lifestyle TVs and is now being applied across the company’s entire 2021 TV lineup. The employees involved in developing the eco-packaging hope that it will eventually reach much more consumers, and will help encourage them to contribute to environmental conservation in any way they can. “Samsung is known for producing technologically advanced products, but I want others to know that Samsung also believes that little things like these matter, and we are working on them as well,” said Son. 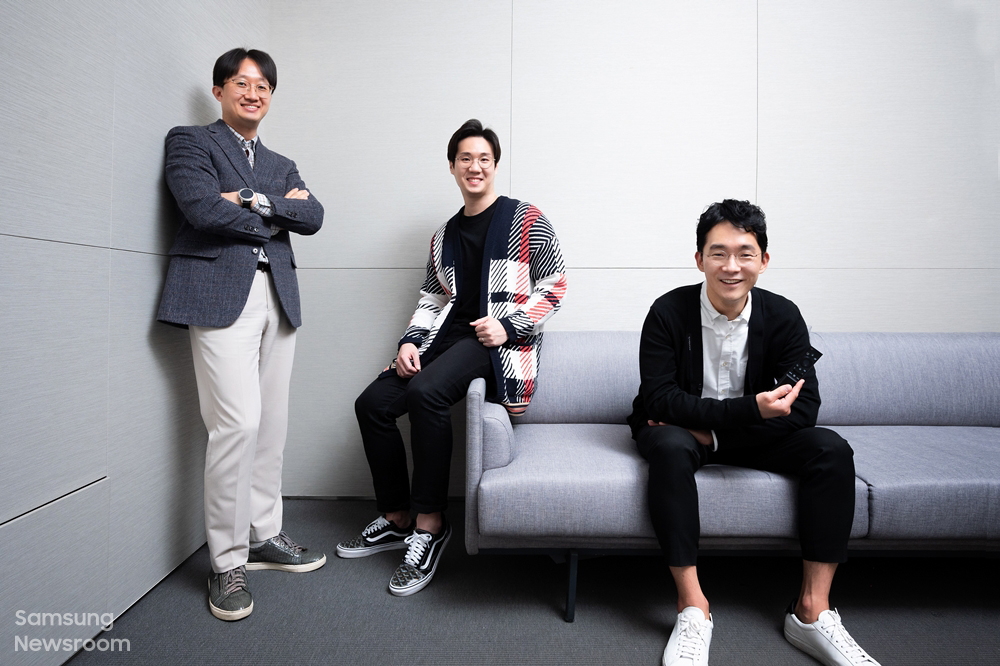 1 According to the Global E-waste Monitor 2020 by Global E-waste Statistics Partnership (GESP), the amount of electronic waste in 2019 was 53.6 million metric tons (Mt).