Samsung celebrates the arrival of its latest flagships, along with Korean Superstar Park BoGum! 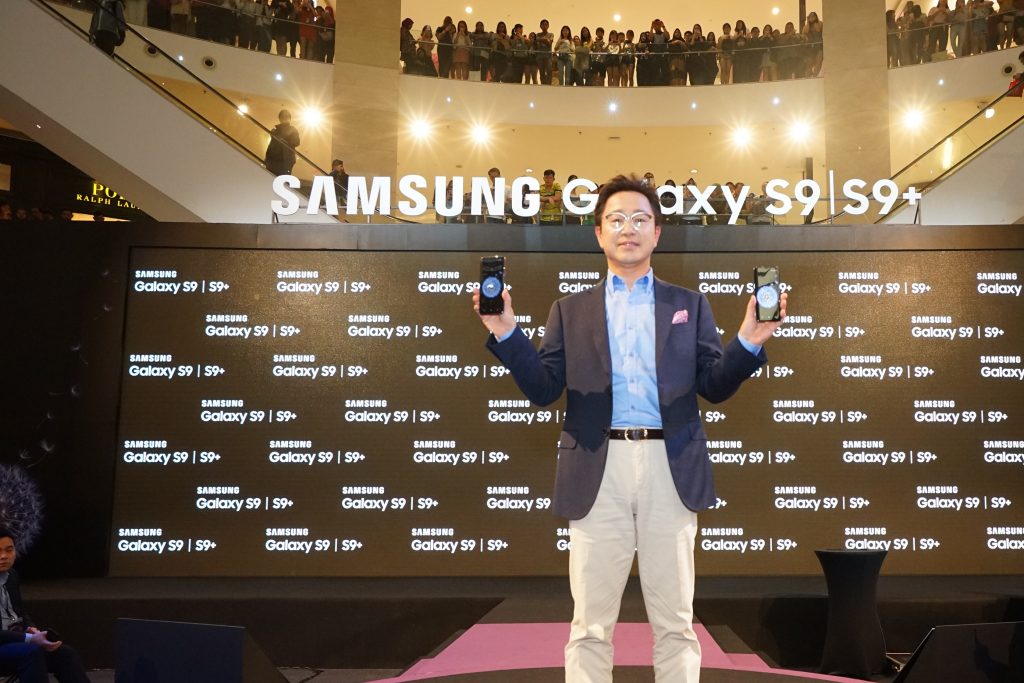 Kuala Lumpur, 15 March 2018 – The much anticipated Galaxy S9 and S9+ are finally here! With the arrival of its latest flagships, Samsung continues to innovate and redefine the limitations of technology, giving Malaysians new ways to experience the world. The flagships are well-recognised globally, having received over 30 awards at the recent Mobile World Congress 2018 including “Best New Connected Device” and “Best Mobile VR or AR”.

“The S9 and S9+ were inspired by today’s way of communicating on the social media landscape. Self-expression has evolved, and gone are the days where consumers texted each other to convey their thoughts. Instead, they now use images, videos and emojis. Samsung has always been at the forefront in producing amazing smartphone cameras, but as a tech company known to push past boundaries and also with a deep commitment to listen to our consumers, we took our latest smartphones to another level by redesigning and upgrading the camera,” said KM Liew, Head of IT and Mobile Business, Samsung Malaysia Electronics.

“The Galaxy S9 and S9+ now come with new AR Emoji, Super Slow-mo and Super Low-light features. These enable consumers to discover and re-imagine a whole new level of visual communication, tailored to their own unique voices. To those who believe that a picture paints a thousand words, the Galaxy S9 and S9+ is the way to go,” Mr Liew added.

While it was the S9 and S9+’s new and innovative features that drew the attention of tech lovers and enthusiasts, it was the special appearance of Korean actor and superstar, Park BoGum, that sent the crowd into a frenzy. Through the Galaxy S9 and S9+’s great new features such as Super Slow-mo video recording, the ‘Love in the Moonlight’ prince was on a mission to experience the world in a whole new way with his Malaysian fans.

Today’s cameras are for more than taking pictures – they are for connecting and communicating. Consumers want a smartphone camera with state-of-the-art technology, so they can express themselves with high-quality images and tools to tell their own unique story. The Galaxy S9 and S9+ cameras are built with these consumers in mind, with a Super Speed Dual Pixel sensor with dedicated processing power and memory to take amazing superior quality shots. DxOMark, the trusted industry standard for camera and lens image quality measurements, recognises this and given Samsung’s reimagined camera its highest-ever score for combined photo and video rating in a smartphone camera.

Much credit for the S9 and S9+’s high scores should be attributed to their amazing performance under low-light conditions. Similar to the way the iris of a human eye expands and contracts depending on a person’s surroundings, Samsung’s Dual Aperture camera (F1.5 / F2.4) automatically adjusts to its lighting conditions by letting in more light when it is dark through its greater aperture lens (F1.5) or switching to its lower aperture lens (F2.4) under bright light, ensuring that photos taken are crisp and clear. Apart from that, the popular dual-camera setup is available via the Galaxy S9+ as well, allowing users to continue shooting professional portrait shots with the phone’s ‘Live Focus’ mode.

Users are also now able to express themselves in brand-new ways, thanks to the S9 and S9+’s AR Emoji and Super Slow-mo features. While Samsung allows users to create an emoji that looks and acts almost exactly like them, the Super Slow-mo function (video recording of up to 960 frames per second) allows users to expand their creativity with utmost fun. Furthermore, S9 and S9+ users can now experience the world in a whole new way thanks to a smarter Bixby, integrated into the camera. Bixby is now able to translate foreign languages[1] and currencies instantly by image, provide useful information about your surroundings, and so much more.

Smartphones are increasingly becoming our go-to choice for entertainment, which is why Samsung created a device that offers premium sound experiences with stereo speakers tuned by AKG. The Galaxy S9 and S9+’s audio also support Dolby Atmos, giving the effect of a 360-degree, impressive cinematic sound.

The Infinity Display on the Galaxy S9 and S9+ were given an upgrade as well. Featuring a new, bold, and bright Super AMOLED Infinity Display that looks gorgeous even under direct sunlight, it has received an “Excellent A+” grade by DisplayMate Technologies, the world’s leading evaluator of screens.

A Device that Fits with the Connected Lifestyle

As the first smartphone to support the new SmartThings app, the Galaxy S9 and S9+ are the central hub to manage every facet of the connected lifestyle at home, at the office, or on the go. The next-generation Samsung DeX empowers a mobile lifestyle by bringing a large, full-screen experience to the mobile handset. The redesigned DeX Pad is a new docking system for users to easily connect the Galaxy S9 and S9+ to a larger monitor, keyboard and mouse to expand the mobile experience with enhanced document editing or even full-screen gaming.[2] Users can also transform the Galaxy S9 and S9+ into a Touch Pad with the DeX Pad.[3]

The Best Comes Standard with the Galaxy Foundation

Samsung sets the gold standard for smartphones with IP68[4] water and dust resistance and wireless charging that goes a step beyond with the Galaxy S9 and S9+. The devices now support expandable memory of up to 400GB via a Micro SD Card and are equipped with the latest premium application processors, offering powerful performance and sophisticated image processing.

In addition, the Galaxy S9 and S9+ give users the peace of mind knowing that their phone is protected by Knox 3.1, Samsung’s latest defense-grade security platform. The Galaxy S9 and S9+’s Intelligent Scan feature supports three different biometric authentication options – iris, fingerprint, and facial recognition – so users can choose the way they want to protect their device and applications.

The Galaxy S9 and S9+ take health to the next level with an improved optical sensor built directly into the device, providing richer and more accurate information on users’ health status. This sensor allows the devices to keep track of users’ Heart Load Factor, a new measurement of the real-time demand placed on the heart[5].

The Galaxy S9 and S9+ will be available starting 16th March 2018 in Malaysia. Offered at a recommended retail price from RM3,299 to RM4,399, it will be available in Midnight Black, Coral Blue and Lilac Purple.

To celebrate its launch in Malaysia, Samsung Malaysia Electronics will be kicking off a limited-time Roadshow Promotion in Pavilion Kuala Lumpur, Queensbay Mall in Penang, and Aeon Bandar Dato Onn in Johor Bahru. From 16th until 18th March 2018, customers who purchase a new Galaxy S9 or S9+ will be eligible for exclusive gifts by Samsung, which include:

Apart from that, consumers will receive a total of 1,500 Samsung Rewards Points after activating Bixby, Samsung Members and Samsung Pay on their newly purchased Galaxy S9 and S9+, while stocks last.

For more information about the awards and positive responses the Galaxy S9 and S9+ have received so far, please visit the links below:

To know more about Samsung’s new flagships, the Galaxy S9 and S9+, and their new and innovative features, visit http://www.samsung.com/my/smartphones/galaxy-s9/. 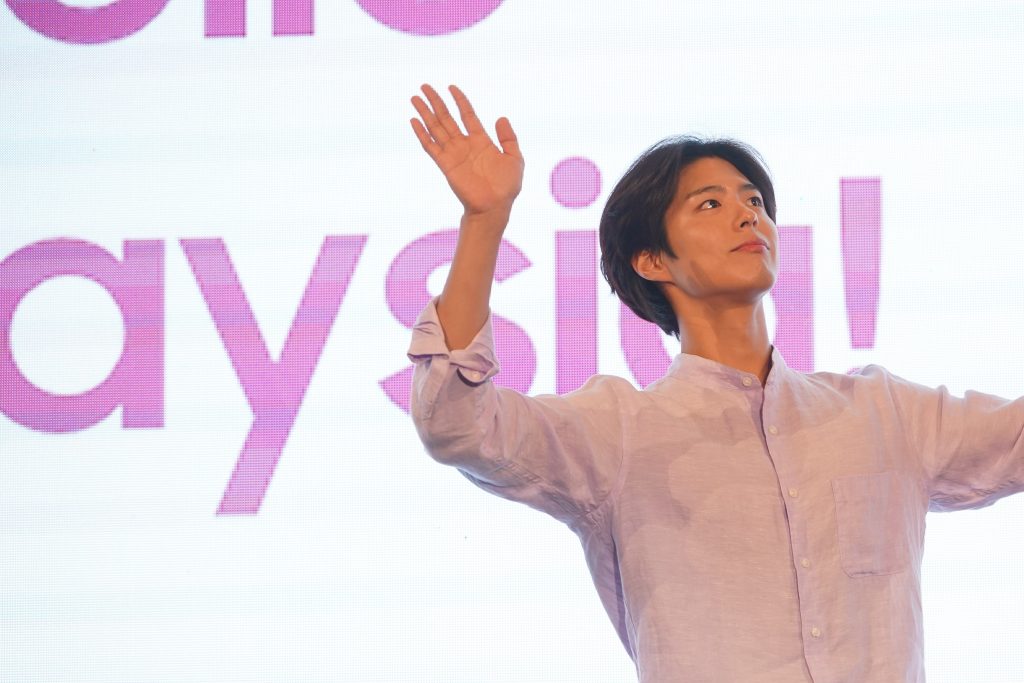 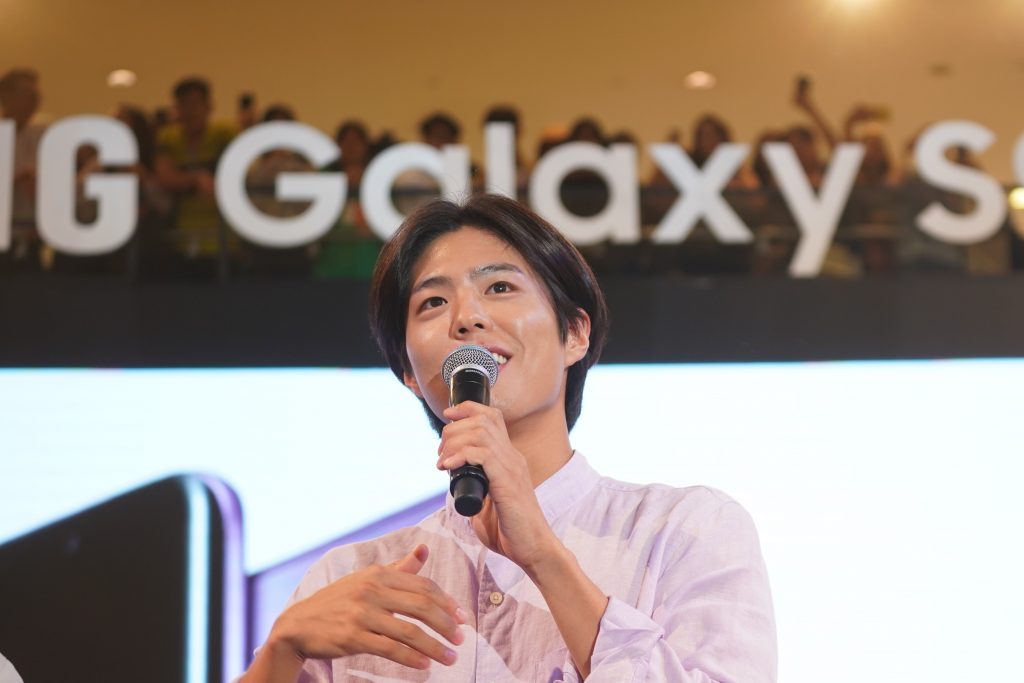 Korean actor and Superstar, Park BoGum, making his highly-anticipated arrival at Pavilion KL, during the official launch of the Samsung Galaxy S9 and S9+ 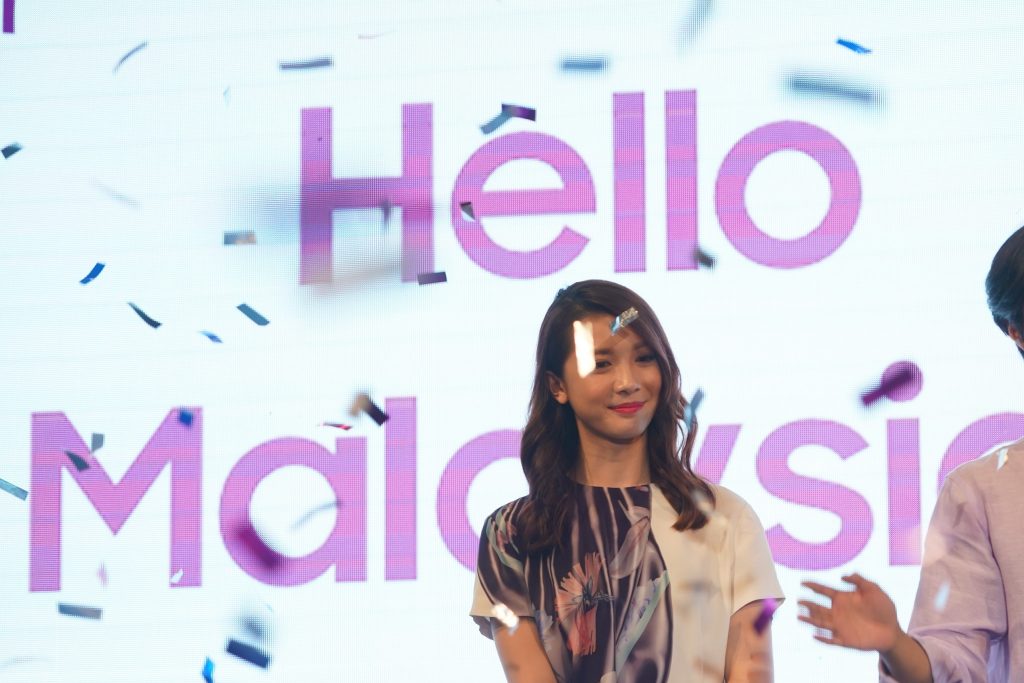 (From L to R) Malaysian actress and celebrity Serene Lim making her appearance with Park BoGum at the Galaxy S9 and S9+ launch. 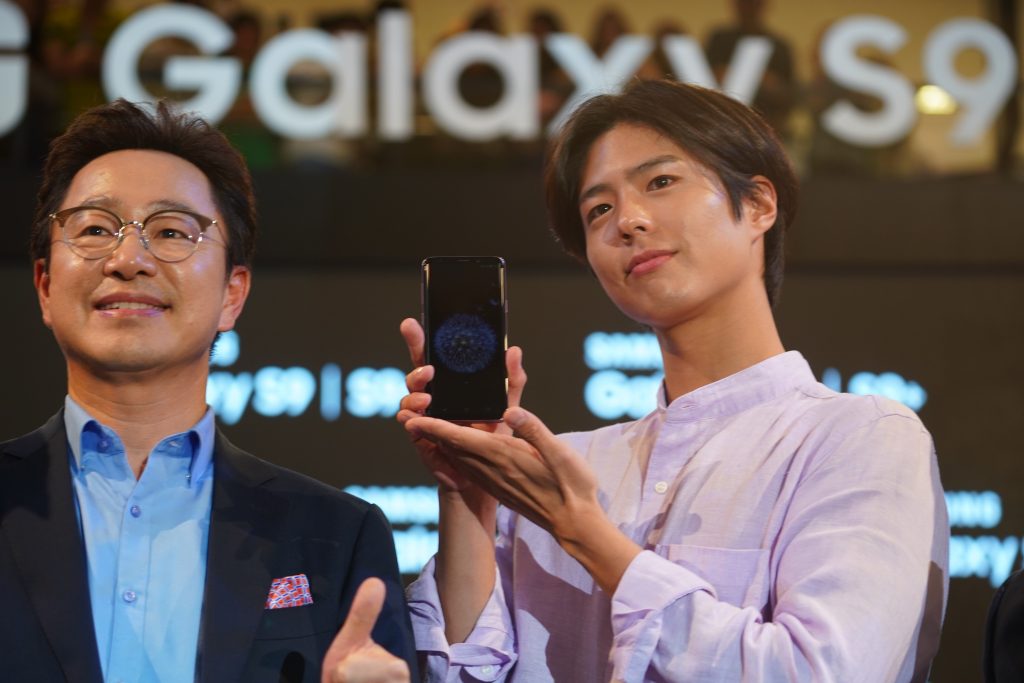 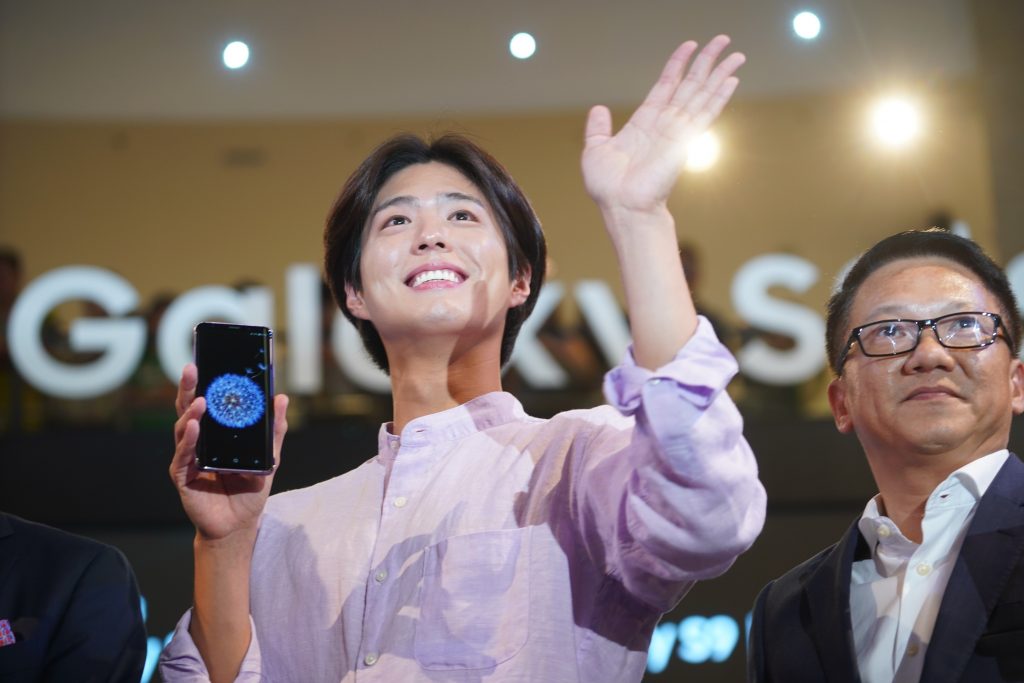 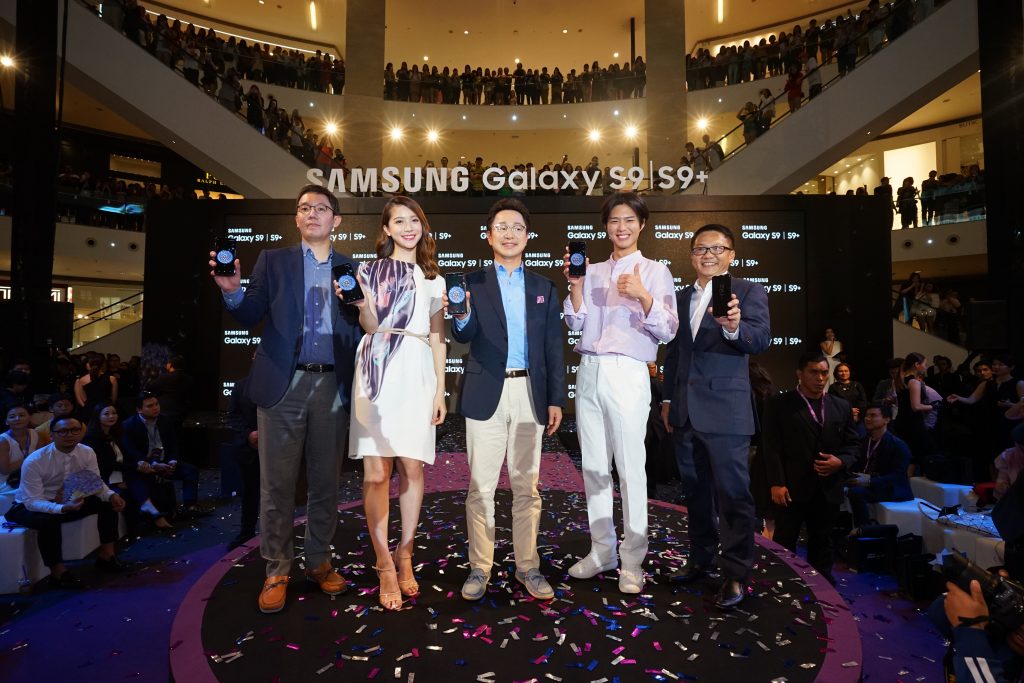 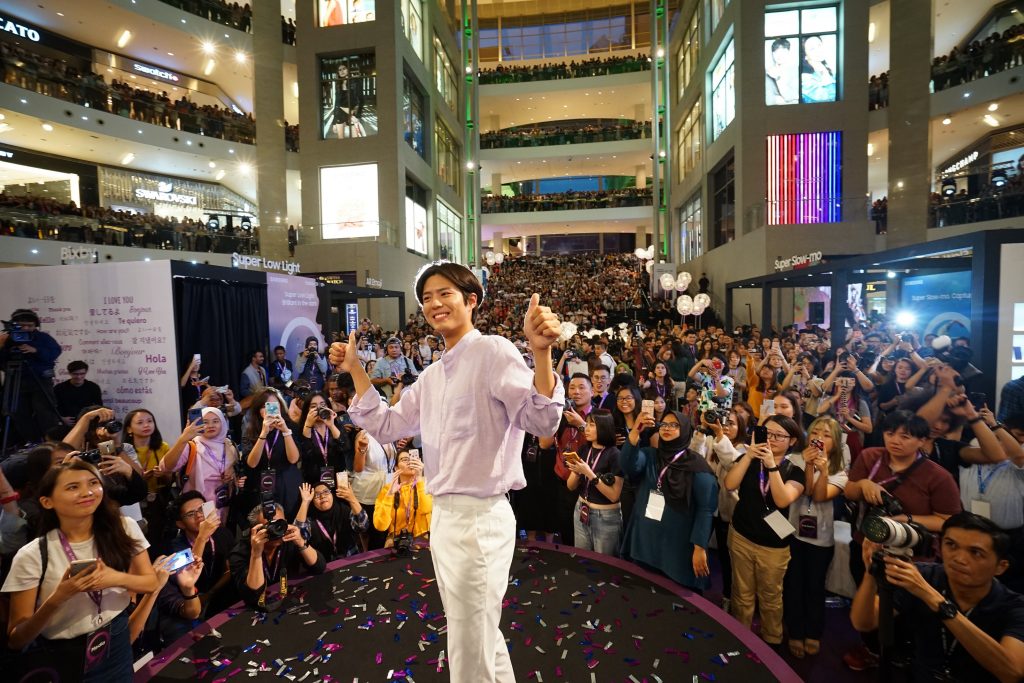 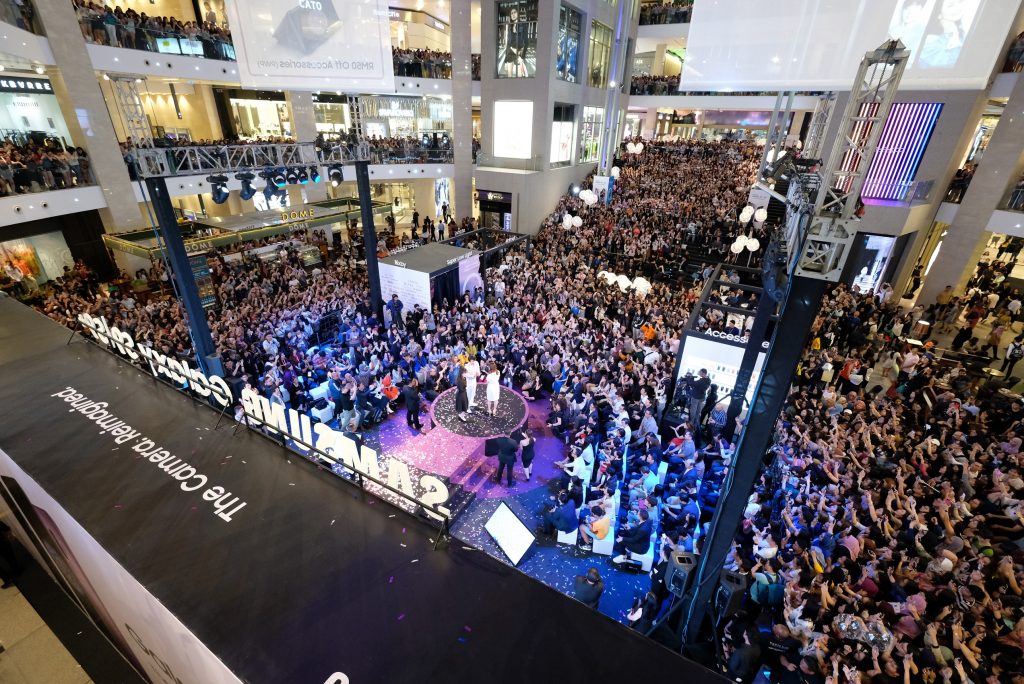 Park BoGum posing with the large crowd and his fans at the launch of the Galaxy S9 and S9+ in Pavilion KL. 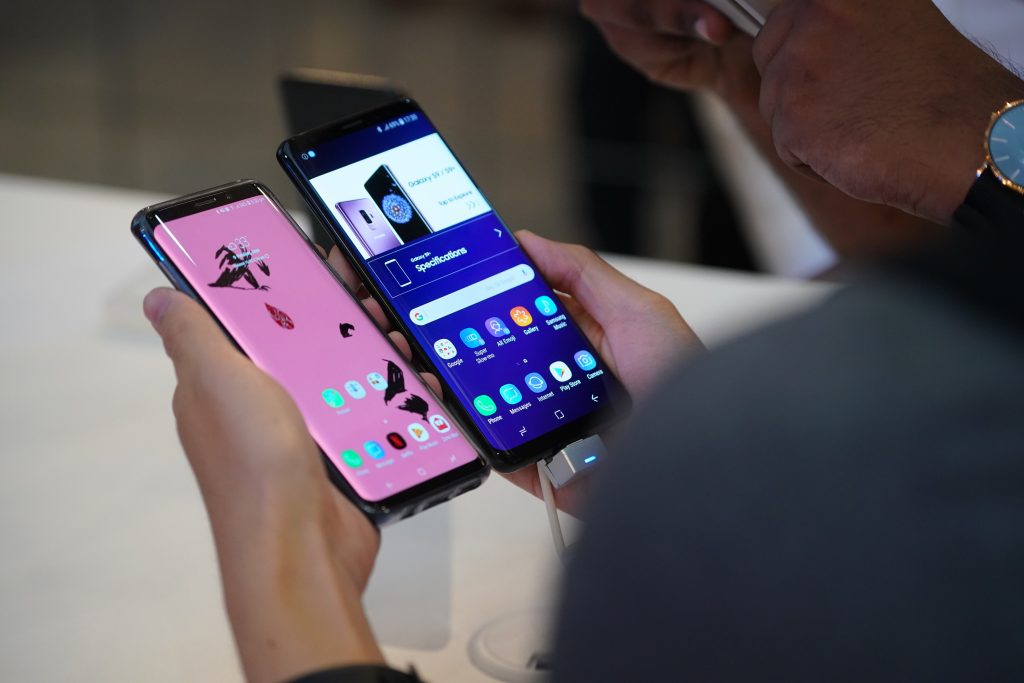 The Samsung Galaxy S9 and S9+ finally make their arrival on Malaysian shores.

1 Actual user interface displays only one target language at a time. Different input and output languages are provided in different countries. An internet connection is required to use this service.

4 Based on test conditions for submersion in up to 1.5 meters of freshwater for up to 30 minutes. Rinse residue/dry if wet.

5 Intended for general wellness and fitness purposes only.