Advancing a Better Future for Innovators and Consumers

Enriching people’s lives through technology is at the heart of everything we do. Our tradition of breaking boundaries, creating new products and even entirely new product categories has been recognized by industry, design and business experts worldwide. This also speaks to our current litigation against Apple in the U.S. Supreme Court, which agreed to hear our case on October 11, 2016.

Samsung took this case to the Supreme Court because we believe the way design patent law has been interpreted is not in line with modern times because it discourages competition, innovation and consumer choice.

As the first design patent case the Supreme Court is hearing in more than 120 years, much is at stake. The Court’s decision can lead to a fair interpretation of patent law which supports creativity and reward innovation far into the future or stifle creativity and innovation.

We asked the Court to provide guidance on how to properly apply a statute that was put in place long before the advent of 21st-century modern technology. When design patent law was created in the 17th century, products were much simpler. It pertained to things like the handle of a spoon or a carpet pattern, which may have driven a purchase decision. By comparison, today, there are more than 200,000 patents in a single smartphone. 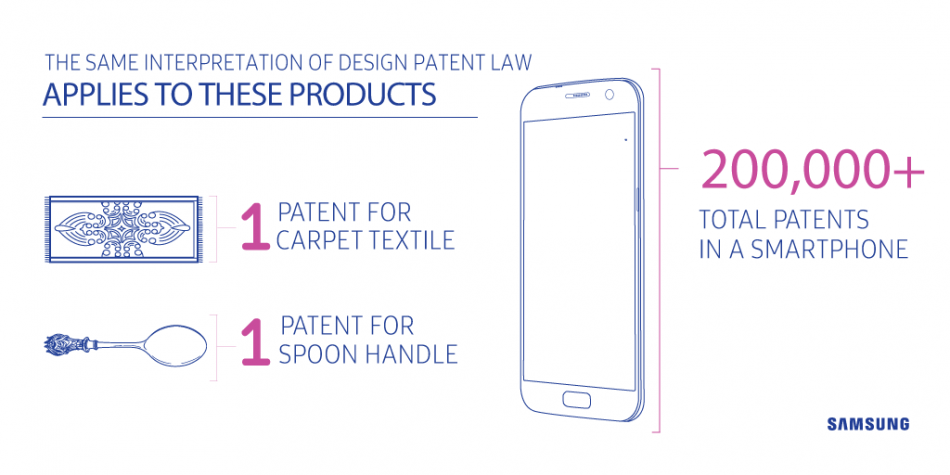 Samsung, of course, favors protecting design as our products are recognized for the great investment we make in it. For instance, we have received the highest number of the coveted International Design Excellence Awards in the past five years, just a small portion of the nearly 800 design awards we have received in the past 10 years.

The problem is that Apple wants a rule that stifles innovation – including innovation in design – by discouraging the development and marketing of new products.  According to Apple, a patent holder of a one design feature on a smartphone is entitled to the profits from the sale of the entire phone. With more than 200,000 patents in a smartphone, such a rule undervalues the contributions made by the other hundreds of thousands of patent holders to that smartphone.

In such an inequitable environment, innovation will be stymied by fear of litigation and the loss of all profits should a product be found to infringe any design patent – no matter how insignificant. For example, with their design patent for a front screen with rounded corners, Apple received all of Samsung’s profits from the sale of its phones.  Such a ruling discourages innovators from bringing new products to market.

Samsung believes this is unfair, encourages form over function, and allows for excessive damages awards and enables a wave of opportunistic lawsuits by patent trolls – lawsuit-generating people or companies that try to enforce patent rights far beyond a patent’s actual value or contribution.

Supporters of Samsung’s case include the world-leading technology companies such as Google, Facebook, Dell, HP and eBay; 50 intellectual property professors; and more than a dozen public interest groups and trade associations representing consumers and small businesses.  All – including the U.S. government – have argued that the federal circuit court ruling in favor of Apple should be overturned.

Our concerns run deeper than any one product, or even our own interests. We believe that clear guidance from the Supreme Court on how to apply the design patent law fairly in the 21st century will promote competition and provide wide-ranging benefits for innovators and consumers for years to come.

That is why we are so committed to this battle – and why so many other leaders are standing with us – to create a more competitive environment and paving the way for a better future for innovators, for consumers, and for you.

Samsung in the U.S.A History of Realizing the Potential

Samsung Kicks Off the 7th Annual Solve for Tomorrow Competition