With rising concerns over carbon emissions and wasteful energy consumption, the efficiency of commercial buildings has become a critical area of focus for the construction industry. As a result, HVAC manufacturers are beginning to develop green and efficient technologies and are redesigning their product offerings to decrease running costs, with a focus on sustainability.

As a key figure in the industry, Samsung is committed to helping consumers achieve greater energy conservation with its sustainability-centric, eco-friendly HVAC innovations.

A Circular Design for Enhancing Performance

Utilizing inventive designs is one way Samsung is working toward enhancing efficiency.

The 360 Cassette, for example, is an innovative, bladeless system that incorporates an industry-first circular design for an even airflow and stylish aesthetic. Unlike conventional indoor units that use blade rotations to control the direction of air, the 360 Cassette integrates a Booster Fan that uses pressure to generate a complete, horizontal airflow that works to eliminate cold drafts.

Samsung’s circular air wave consistently controls the temperature of the room by providing an even distribution of air across a full 360-degree range. Bladeless flow control allows for a 39 percent increase in coverage area by delivering 100 percent of air volume, compared to traditional four-way cassette units, which can lose up to 25 percent of air volume.

Samsung’s System Air Conditioning units like the 360 Cassette rely on outdoor units to function. But conventional outdoor units are not without their limitations, as many of them take up large amounts of space.

Because of this, inverter-type air conditioners are becoming increasingly popular, as they occupy less space and can achieve greater efficiency at lower costs when compared to traditional AC systems. Furthermore, they are integrated with a variable speed compressor that switches off once the desired temperature is reached and switches on when the temperature changes, thus providing energy savings.

The DVM S is the first air conditioning system to achieve 30HP (84kW) per unit by including a new Super Inverter Scroll Compressor with flash injection technology that improves its performance by as much as 21 percent compared with conventional products. 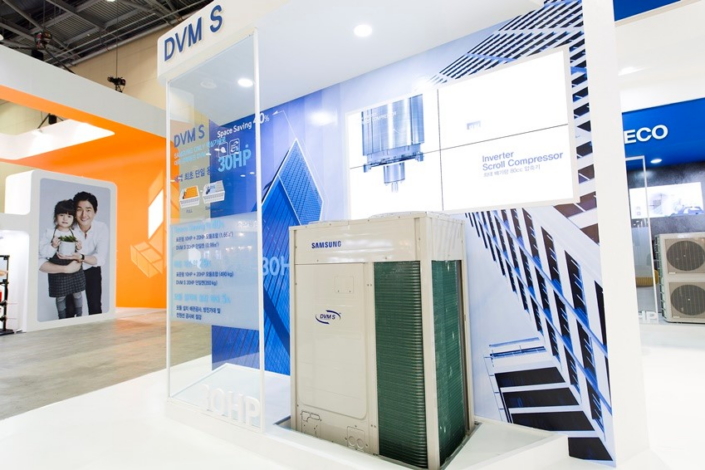 Samsung developers spent four years researching ways to maximize the outdoor unit’s efficiency. To minimize its size, they reduced the number of compressors from three to two. Also, they improved the efficiency of air and heat exchange by separating the pins from the heat exchanger. The resulting product weighs 29 percent less and occupies 40 percent less space.

“For mid- to large-sized buildings, the best HVAC system is one that takes up the least amount of space,” said Iloh Bae, Samsung System Air Conditioning B2B Product Manager. “Conserving space not only decreases one’s early-stage investment but also extends the lifecycle of the building, helping to secure profitability.” 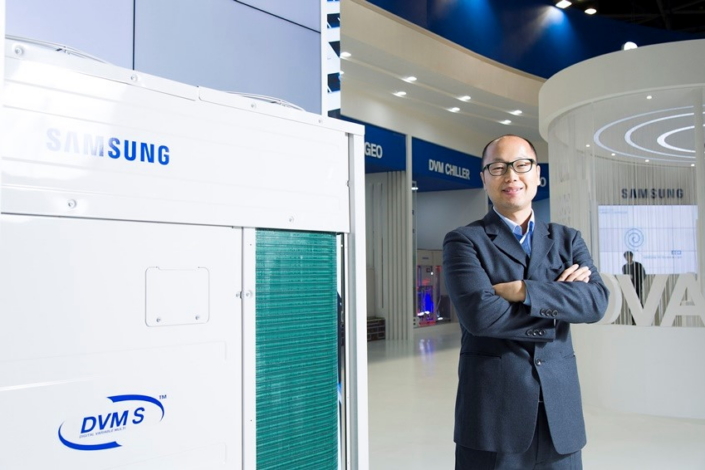 The DVM Chiller, meanwhile, combines an air-cooled chiller with Inverter Variable Refrigerant Flow (VRF) in a compact unit. Because it does not require a separate cooling tower, it is capable of dramatically decreasing the required size of the installation area by 21 percent. Furthermore, basic models can be combined in different ways to extend capacity up to 320 tons. 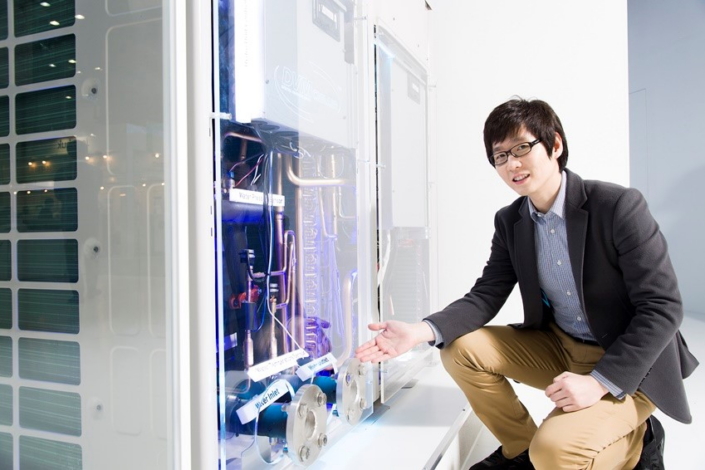 Similarly, the DVM S ECO is a maximum capacity side discharge VRF air conditioner engineered to deliver a single outdoor unit solution for apartment and office buildings. The innovative design of the product features a robust Inverter Scroll Compressor and corrugate fin, which improve heating performance by 20 percent and increases airflow by 10 percent compared to standard side discharge VRF units. 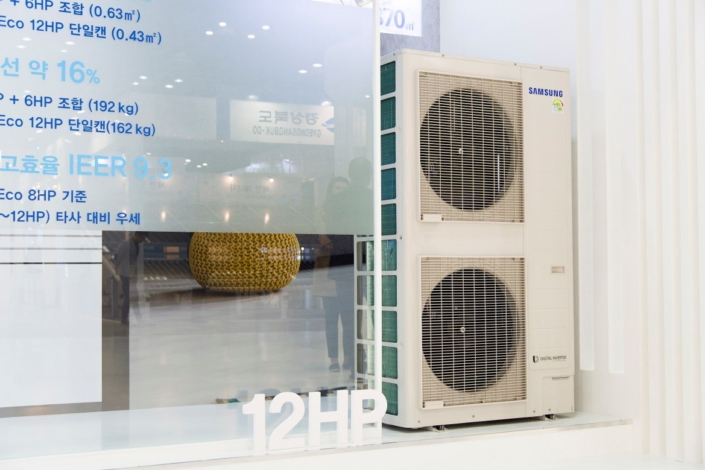