Developers will convene to discuss the latest technological advancements at the Samsung Developer Conference 2016 (SDC 2016). The event will feature keynote speeches and presentations from a range of tech leaders and will offer a wide variety of sessions in which developers can exchange ideas, partake in new experiences and explore potential innovations.

Such developments include those born at Samsung Electronics’ C-Lab, an innovation program that helps company employees to nurture their own creative business ideas. Representative teams will introduce for the first time their secret project prototypes in hopes of getting constructive feedback from SDC attendees to develop their products further.

The projects include LiCon, an app that controls various smart devices via a smartphone camera; Ahead, a communication device for people who wear helmets; AMe, a wearable lifelogging camera that produces 360-degree VR videos; ItsyWatch, a wearable that helps children form good habits; and Entrim 4D+, a VR accessory that lets users feel the movements of the on-screen action.

The projects will be showcased at the Moscone West Center from April 27 to 28 in San Francisco.

LiCon: An App That Recognizes and Controls IoT Connected Devices Via a Smartphone Camera 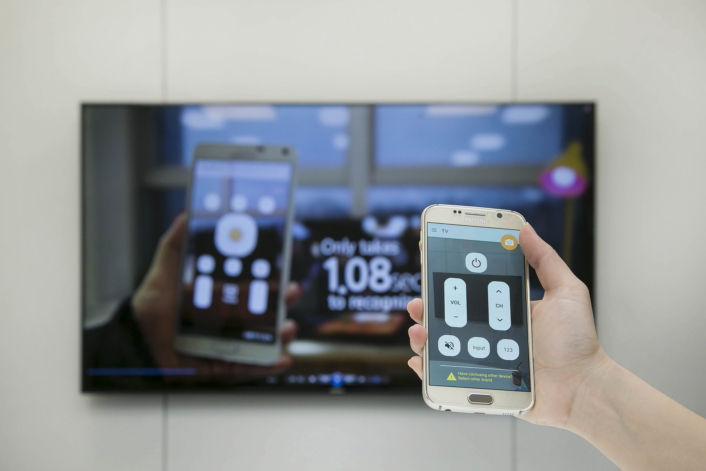 The fast-evolving Internet of Things (IoT) has the potential to become a revolution in modern day living. However, since so many gadgets are controlled and operated by their own individual apps, accessing them can be a major inconvenience. Which is exactly what the team behind LiCon hopes to change.

With the LiCon app, the smartphone camera becomes a tool to recognize and control IoT connected devices.

For instance, when a user takes a picture of an IoT connected device such as an air conditioner or robot vacuum cleaner, the smartphone utilizes vision-based recognition to identify the product. Then, within seconds, a controller interface is displayed, which lets users adjust the temperature or turn off the power with just a few taps.

Additionally, users can also quickly launch product-specific applications by taking a photograph of their connected device. As such, users can easily perform tasks or access information in a simple way, without having to swipe through endless screens of icons to locate each individual device application.

As users take pictures of their IoT connected devices, and subsequently add their own images to LiCon’s ever-expanding database through the cloud sever, LiCon, powered by deep-learning technology, grows even smarter and can recognize devices more easily.

Considering how effortless it is to take a picture, LiCon not only saves time, but also makes the Internet of Things accessible to just about anyone.

Ahead: A Communication Tool for Your Helmet 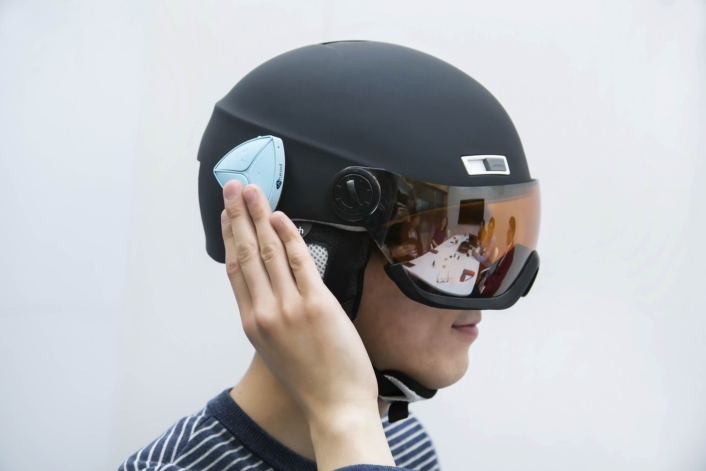 From ski slopes to construction sites to race tracks, helmets are vitally important for maintaining safety in dangerous environments. While essential, they can sometimes make simple tasks, such as making a phone call or listening to music, not only bothersome, but also risky.

Ahead, a communication device born in the C-Lab, could very well change all of this.

Ahead is a small triangular gadget that can be attached to any helmet via its super-strength magnets. It enables users to make and take calls, listen to music and receive voice notifications through Bluetooth.

The Push to Talk (PTT) version of the device enables communication among multiple users at the same time via a two-way radio connection.

The gadget, which is available in a variety of colors, boasts three buttons which are used to control volume, change music tracks and answer calls, and can also be used to make calls with a speed dial function that is configured through the Ahead app. 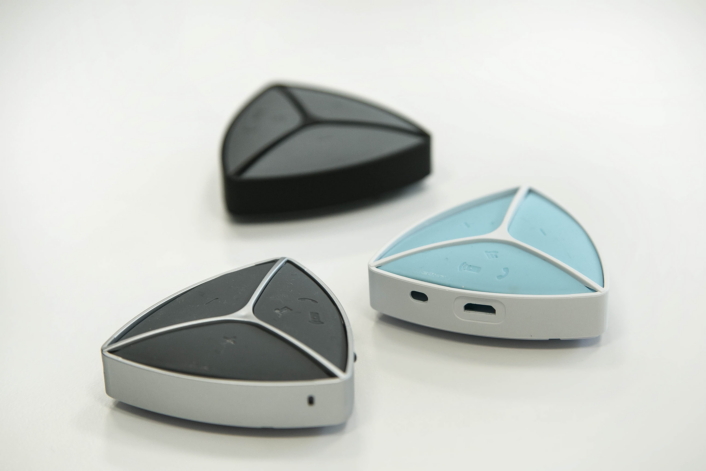 Unlike headphones or earbuds, Ahead utilizes oscillators to create a surround sound effect without blocking out background noise, thus ensuring a safe environment. Two microphones help to make certain that the same background noise does not disrupt phone calls or communication.

Ahead has numerous potential use cases, from improving coaching on the field, to enhancing communication on construction sites, to making a motorcycle ride along the highway more enjoyable.

AMe: A Necklace-Like Wearable That Captures Candid Moments in 360 Degrees 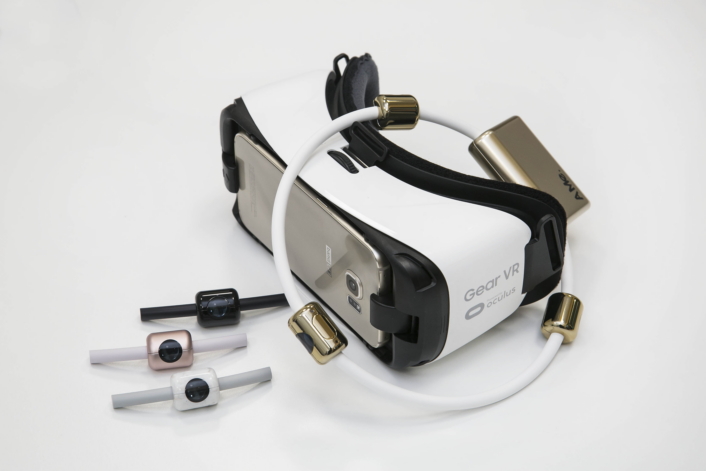 When lifelogging—or registering daily life with technical tools and services—first emerged, pioneers had to tote around a variety of tools and devices to capture the moments of their lives as data, photos and videos. Yet, with social networks centered on status updates and photo sharing, the practice of recording and tracking life has since gone mainstream.

Now, lifelogging could very well transform yet again with the unveiling of AMe. 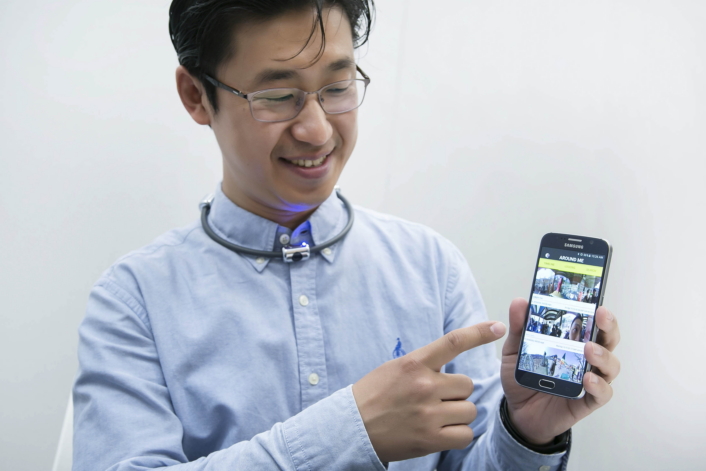 AMe (short for “Around Me”) is a wearable device that is worn like a necklace and boasts three small individual cameras that record 360-degree video footage in 4K. Captured video, which presents the user’s surroundings in a first-person perspective, is then stitched together and managed via the AMe app. Users also have the option to geotag or share their videos on social media channels directly from the app.

This no-hands camera rig offers a unique convenience, as it does not need to be mounted, and allows for a more candid filming environment, since it resembles an accessory more than an invasive camera. Along the same vein, the AMe team has made the prototype available in an array of colors, including black, white and rose gold to fit just about anyone’s style. 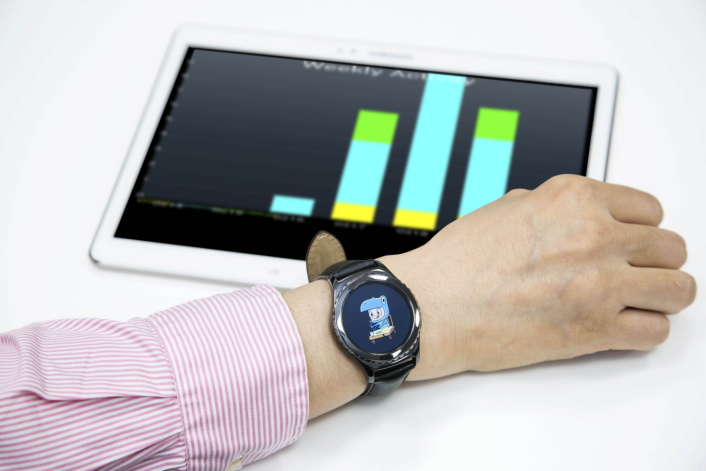 Most wearables for kids on the market today were designed with a focus on safety and contribute more to parents’ peace of mind than anything else. As a result, kids aren’t all that eager to wear them because they aren’t, well, fun.

But, ItsyWatch is bringing something new to the table. This gamified smartwatch app (the prototype utilizes Samsung’s Tizen-powered Gear S2 smartwatch) displays adorable cartoon characters that add fun to everyday activities, such as exercising, eating and brushing one’s teeth.

Engaging in the instructed activity then enables the interactive character to grow. Positive feedback offered by the characters keeps kids interested and motivated to continue participating in the “game.” 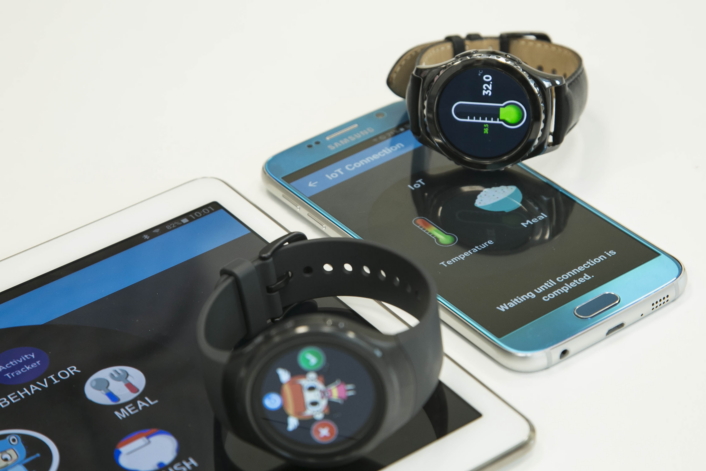 To add to the fun value, children can also use the app to send voice messages to their friends and family members.

But kids aren’t the only ones benefiting from the app. Parents can track kids’ activities to analyze their health and well-being.

Besides consulting child education specialists, the ItsyWatch team—all of whom are parents themselves—considered their own children’s needs during the development process. As such, the smartwatch app and its functions are based on real-life people and experiences.

In addition to showcasing their product, the ItsyWatch team will also lead a technical session entitled “Developing Hybrid Gear App and Extensions” at SDC on April 28 to demonstrate potential use cases of the Gear S2 and Tizen platform.

Entrim 4D+: A Device That Lets You Feel VR 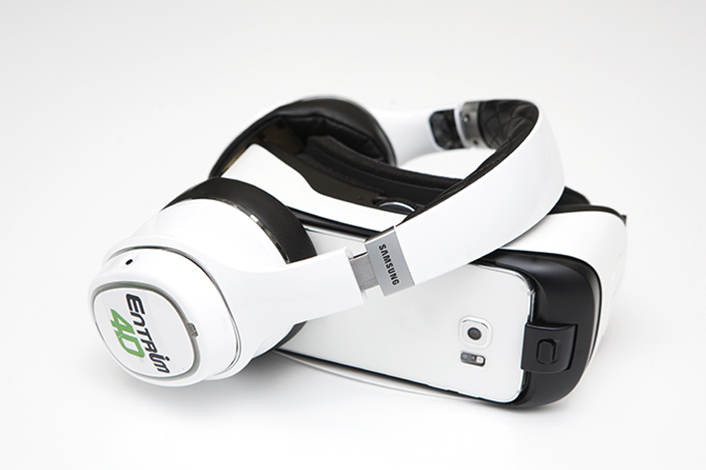 In an effort to increase the fun and decrease the motion sickness that come along with virtual reality, the C-Lab created Entrim 4D. Using a combination of algorithms and Galvanic Vestibular Stimulation (GVS), a safe and simple technique that sends specific electric messages to a nerve in the ear, the VR accessory synchronizes your body with changing movements in VR content.

After showcasing the prototype at South by Southwest, the minds behind the device have further developed the product—now called Entrim 4D+—based on feedback they received from event attendees. 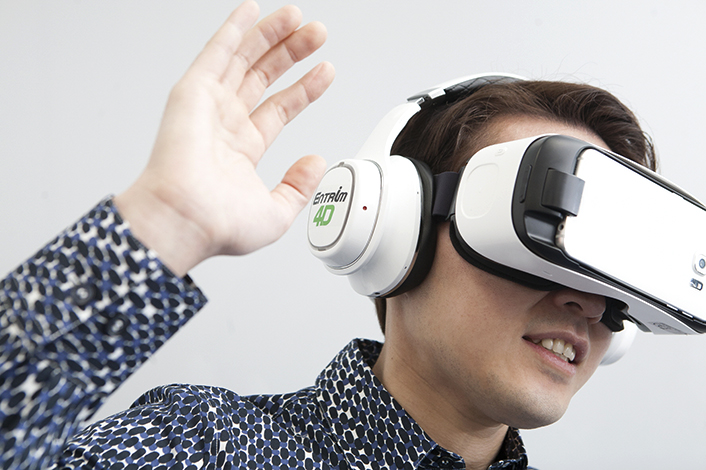 Whereas before, the VR accessory allowed users to feel only left and right movements, the device now allows them to feel forward, backward and 3D rotating motions, too, making the VR experience feel more real than ever before.