[Gear Fit2 Rundown] Designed for Comfort to Fit Every Style

Earlier this month, Samsung released the Gear Fit2, a GPS sports band that helps you track and monitor your everyday activities. It is equipped with useful features optimized for fitness enthusiasts but also boasts a more comfortable, secure and sleek design.

Designers and mechanical R&D engineers at the Mobile Communications Business explain how the design of the Gear Fit2 originated, and how it was realized. 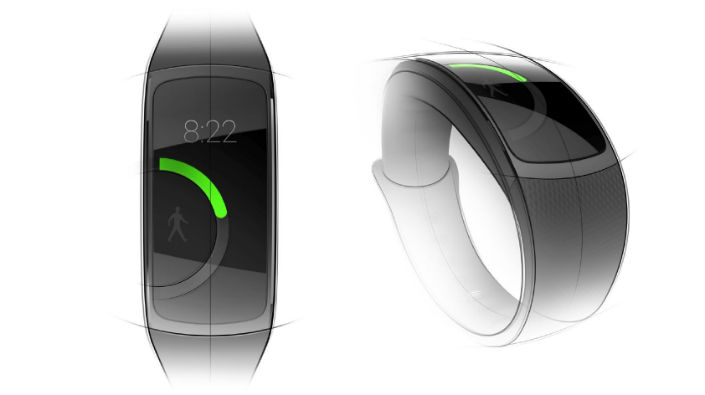 Q. What is the design concept of the Gear Fit2?

Jeff Jones: The original Gear Fit, with its thin, sleek look, was designed as a sports band. Then, with the Gear S2, we learned how to create a more premium wearable fit for everyday life.

We took the knowledge that we gained during these development processes and utilized it to create the product design of the Gear Fit2, merging the rectangular screen of the Gear Fit with the materials and design characteristics of the Gear S2. The final concept aimed to make the Gear Fit2 a device that is at once sporty and luxurious, and to fit naturally into Samsung’s wearable portfolio.

Q. What were the defining moments of the design process of the Gear Fit2?

Howard Nuk: There were many areas of focus during the design process because there were so many factors to consider.

First, we wanted the device to fit just about everyone, so we focused on the differences in people’s wrists, such as size variations, as well as their comfort level and desired point of contact when wearing something. As such, we spent a considerable amount of time determining the optimal curvature and size for the device.

We also wanted it to work with a vertical based UX. And we wanted to provide two side-by-side touch zones for usability. So we experimented with many different screen sizes and ratios until we found the ideal combination to meet our requirements. For example, we employed a 1:2 display aspect ratio on the Gear Fit2 so that its music player can display the skip forward and backward buttons in a horizontal line.

Q. Tell us a bit about how you selected the color, materials and finish (CMF) of the Gear Fit2.

Seounghyun Son: We selected colors—black, pink and blue—that are more “lifestyle” (as opposed to high-tech) so that the device could be worn in both fitness environments and everyday life. Overall, the colors are more subtle than bright, thus increasing the likelihood that someone would wear it all day. Additionally, we wanted to increase the appeal of the band by making it softer than the original Gear Fit and by using a 3-dimensional pattern rather than the 2-dimensional pattern of the Gear Fit. 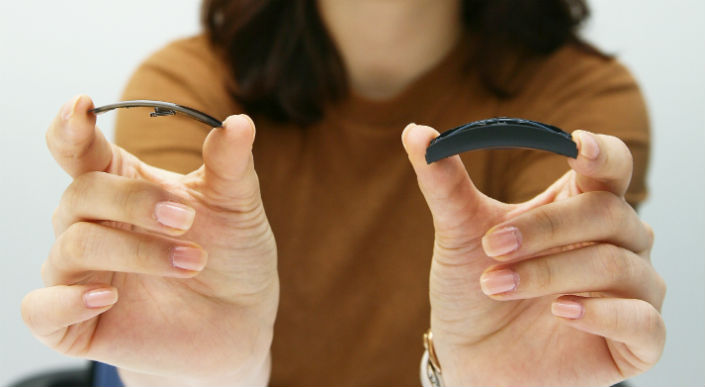 Q. What are the main differences between the Gear Fit2 and the previous model in terms of mechanical features?

Hyunjun Kim: The Gear Fit2 differentiates itself with a premium, more refined design. We accomplished this by applying aluminum materials rather than plastic ones. To avoid discomfort, we worked hard to make it lightweight. Needless to say, applying metal to a wearable was no easy feat, even though Samsung has been incorporating it into its products, including its smartphone models, since last year.

We also included an improved clasp that uses a secure loop to prevent the device from falling off, and created both large and small variants to ensure that it will fit a wide variety of wrist sizes.

Youjung Song: As a sports band, waterproofness is one of the most fundamental features of the Gear Fit2. Since the device boasts a curved display and very thin bezels, we couldn’t use the materials and structures that are typically utilized to ensure waterproofness. So, we employed a special waterproofing material different from the one we used with the Gear Fit, to ensure IP68-level water and dust resistance. In fact, the material is the same one we used in the Galaxy S7 edge.

Q. What was your biggest focus in developing the main body of the Gear Fit2?

Hyunjun Kim: Because the Gear Fit2 is a wearable device, there was no right method for developing the body, since comfort is different for everyone. It was really challenging to create a design that the majority of people would feel comfortable wearing. So we focused on improving the quality of experience (QoE)—which is inevitably subjective—while being faithful to the basics to develop the product and maintain the design concept at the same time.

Youjung Song: To realize the refined design and useful features of the Gear Fit2, we used a wide variety of materials including curved glass, metal, plastic, silicon and urethane compound. Instead of carving the metallic part to create a curve, we applied the appropriate amount of pressure to bend it in the same curvature as the curved glass. This perfectly interlocked it with the main body and band, making the parts appear as a single object.

The fact that each material required different engineering processes made this a challenge.
Furthermore, we also had to find a way to ensure cost-efficient production to make the Gear Fit2 more affordable.

Q. What was the most difficult part of developing the main body of the Gear Fit2?

Youjung Song: Due to its shape, and the device’s small size, there wasn’t enough room to fit all the components inside. So, to make the most of the curved internal space, we applied some changes in its structure, such as splitting the mainboard into three parts. We even had to develop a tool called a “zig” to apply the right amount pressure on a curved surface—a technique we had never tried. We also produced some super-small components exclusively for the Gear Fit2. In particular, ensuring waterproofness required us to tap into different technologies and materials.

Hyunjun Kim: For me, the hardest part of developing the Gear Fit2 was creating its band. We had to find a way to satisfy people with wrists of all sizes and also consider numerous factors including how the ends of the band would be clasped together, whether the band needed an extra clasp to prevent it from falling off, ease of use and consumer feedback. Seeing as the Gear Fit2 is the first wristband design with a clasp, there was a mixed reaction to it.

Q. What makes the Gear Fit2 band so special?

Hyunjun Kim: The Gear Fit2 comes with softer band materials to provide a more comfortable fit than its predecessor and the Gear S2. The joint is certainly one of a kind, as it’s made from a special material with excellent durability to remain unchanged, even after thousands of rounds of clasps. Furthermore, clasping is easier. We also made improvements in the top color coating materials to provide an even better fit.

Seounghyun Son: We applied different patterns on the two sides of the band. On the outer side, we used a 3D pattern to add a touch of luxury, even though it doesn’t affect the usability of the device. We made the inner side of the band fast-drying so that it stays wearable, even when the device is exposed to water.

Q. What was your focus when designing the charging dock of the Gear Fit2?

Hyunjun Kim: There are actually two POGO pins on the charging dock so that the Gear Fit2 can charge upside down or right-side up. In addition, the dock has the same curvature as the Gear Fit2, and is equipped with magnets (which are also embedded in the Gear Fit2’s main body) to make charging an effortless task. Lastly, we continued to make micro adjustments on the dock to prevent corrosion in the case that your device is wet.