HOLMEs: The Unsung Heroes Behind the AddWash Washing Machine

The process of creating a new product is not something to be taken lightly, especially when it has the potential to touch millions of lives. Even seemingly ordinary appliances like refrigerators and washing machines have a lot of science and technology welded into each layer.

Usually, consumers only see the finished product and revel in its newly developed features. They don’t get to hear about the efforts made by the hundreds and thousands of team members at Samsung that work tirelessly to ensure that each opening of a refrigerator door, for example, is a good experience. Nevertheless, whether it is applying completely new technologies or improving previously commercialized ones, God is in the details.

One team of unsung heroes at Samsung consists of Human Oriented Leading Material Experts or “HOLMEs.” This team is also affectionately known as the “Holmes Team,” partly due to their abilities to make brilliant observations and drive results—similar to those of Sherlock Holmes (yes, the character created by Sir Arthur Conan Doyle).

In their lab, thermal-imaging cameras and sensors line the walls while researchers observe test subjects through a special kind of glass that camouflages their presence. This is so that participants can feel as comfortable and at home as possible.

Sometimes, members of the Holmes Team even take part in the experiments directly. Since certain features are more comfortable to certain people depending on age, gender, health condition, and muscle and bone structure, among other factors, it is important to observe a wide variety of people and reactions to gather effective big data. In some cases, ambitious team members go home nursing sore muscles and joints after repeating the same movements several hundred times.

Under the Holmes Team’s leadership, every Consumer Electronics product undergoes tens of thousands of experiments before receiving the green light to launch. Samsung AddWash was no exception. 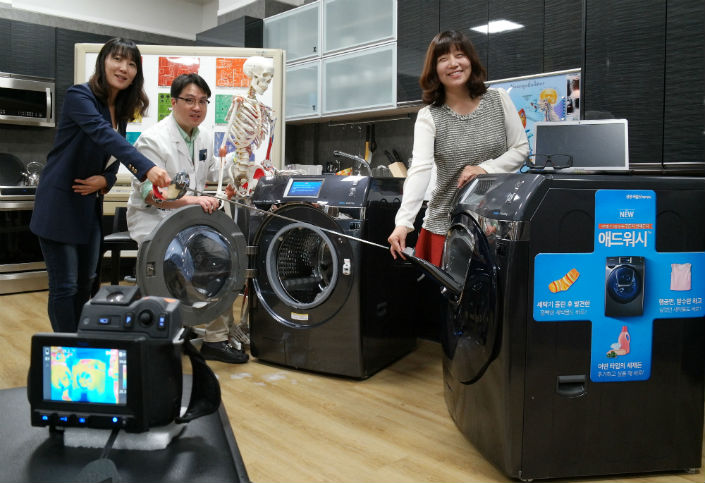 Easing Stress with an Ergonomic Design

The Samsung AddWash front-loading washing machine offers consumers a whole new way to do their laundry, letting them stop a wash mid-cycle to add clothes or detergent. It’s perfect for that loose sock that falls out of the hamper on the way to the laundry room, or for delicate items you want to add later in the cycle.

Samsung wanted to give consumers a way to open the main door in the middle of a wash. Instead, the Design Team came up with the idea of adding a smaller second door they then dubbed the “kangaroo pouch.” 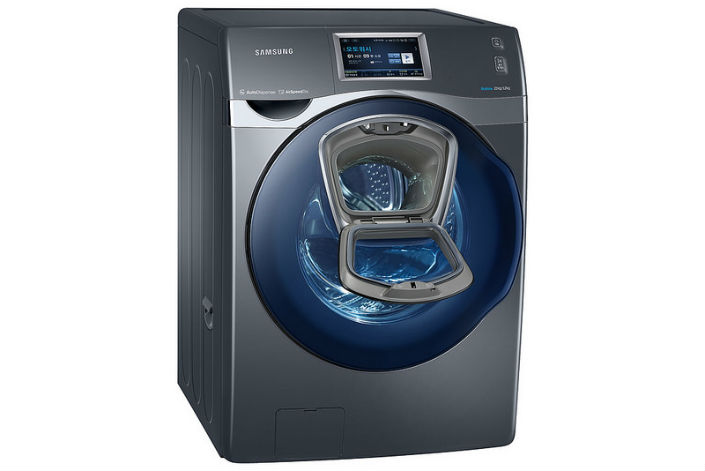 “[We] gathered data on over 10,000 test subjects to evaluate how much energy was required to open the hidden door based on age, gender and health conditions,” says Ah-Hyun Bae, Senior Engineer, Digital Appliances Business, Samsung Electronics. “These experiments take a lot of time but they tell us so much about consumer psychology and behavior, and they were a big help in developing this special AddWash door.”

Just as the Holmes Team had confirmed with big data analysis, AddWash’s final ergonomic design reduces pressure to the consumer’s waist by 70 percent and lessens spinal strain by 40.8 percent when one uses the window instead of bending down to open the main door.

Another key issue Samsung wanted to focus on when applying AddWash technology was safety. To help determine the right design, the Holmes Team measured the amount of energy it would take for the average adult and child to open the AddWash door. Then, Samsung manufactured the door mechanism so that adults could easily open it while children could not.

The team also experimented with hundreds of shapes and sizes for the mid-level door, from round to rectangular to even fan-shaped. They needed to ensure that the door was the right shape and size so that socks and underwear could make it through, but that it would not be a safety concern for families with pets or children. It took the team months of hard work before they came up with just the right fit. The final design they decided on was a fan-shaped funnel that would allow for washable items to be easily throw-in, even without good aim.

The AddWash washing machine has added another dimension to the innovative experiences Samsung has created and shared with customers around the world. Though it may have started as a simple idea, numerous teams, including the Holmes Team, invested their time and passion to perfect it; and they are still doing so.