Innomdle Lab: How the First Ever C-Lab Spin-off Embarked on a Voyage of Discovery

Ask any entrepreneur and they’ll tell you that starting a business involves overcoming setbacks and a whole lot of learning along the way.

That’s certainly true for Innomdle Lab. As innovative as their idea is, it caused them to go on a journey of discovery, product refinement and perseverance. But the company’s founder will attest to the fact that this period in the business’ growth was worth it. They now have a product that could change the way we talk. 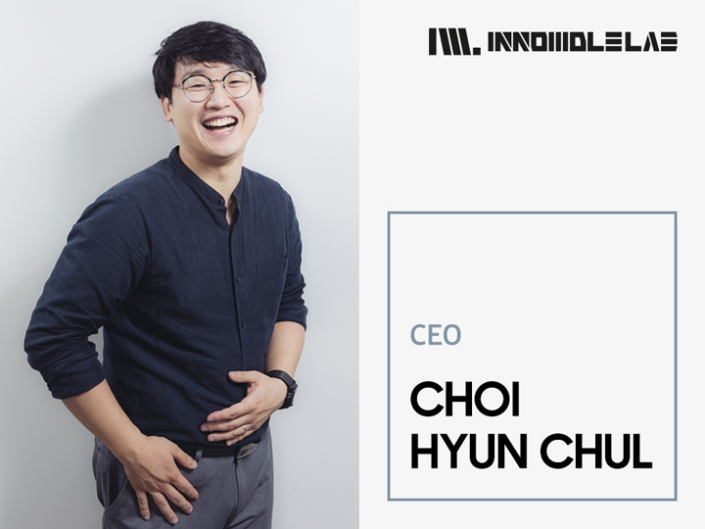 As the first to be given that honor, the founder of Innomdle Lab was in uncharted territory. Although he had access to leading thinkers and experts at Samsung, nothing could have prepared him for what he would face when he launched out on his own as a separate company.

“I would have given up easily if I was on my own,” said Hyunchul Choi, the CEO of Innomdle Lab. “But I saw the efforts of other members for the product, so I just couldn’t give up. I never wanted to give up. I’m working way harder than when I was working for Samsung Electronics. It’s very tiresome, but I gained a lot through the process.”

The flagship product from Innomdle Lab is called Sgnl. Using unique body conduction unit technology, Sgnl enables users to take phone calls simply by placing their fingertip on their ear. And only the user can hear the conversation so they can keep their call private. They no longer have to pick up their phone to call – they can fit conversations into their busy schedules by making calls easily on the move. Driving this technology is a body conduction unit that looks like a regular watch strap. It connects to the user’s smartphone via Bluetooth and contains an embedded microphone that picks up the user’s end of the conversation. 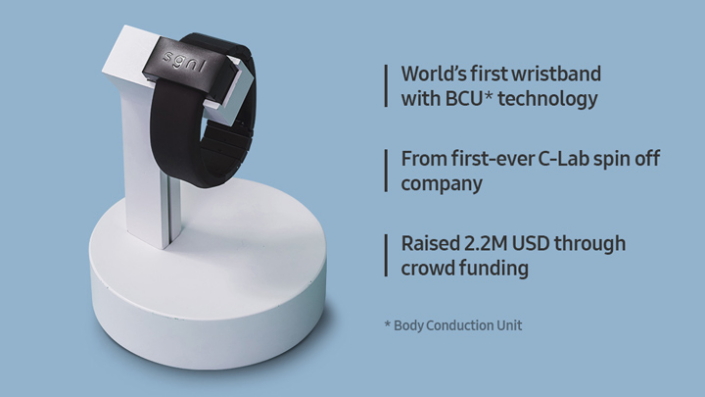 Sgnl sounds as futuristic as it does convenient and the product has quickly captured the imagination of backers who rushed to support the product on Kickstarter and Indiegogo. Innomdle Lab set a precedent here too. It was the first C-Lab company to successfully crowdfund their product this way. It was also one of the largest amounts a crowdfunding project from Korea has ever raised. The project now has an army of supporters who want to see Sgnl succeed.

Although Innomdle Lab had the backing and blessing from Samsung, it was still a challenging journey to get to market. The company had to deal with suppliers, attract and communicate with financial backers – all while adjusting to life as a startup after working for a large corporation like Samsung. It was tough but it formed a valuable part of the learning process for the company.

One key learning came early on in the development of Sgnl: just because a product is innovative, doesn’t mean everyone will automatically want to use it. A former brain science student, Choi had insight into how the brain and connected nerves relate to each other and relay information.

He wanted the Sgnl to use electrostimulation to enable users to privately make phone calls that others nearby couldn’t hear. But when he attended a C-Lab fair with his prototype, nobody felt comfortable enough with the concept and they didn’t want to try the product. It was back to the drawing board. He had to completely redesign the product using vibration technology instead. 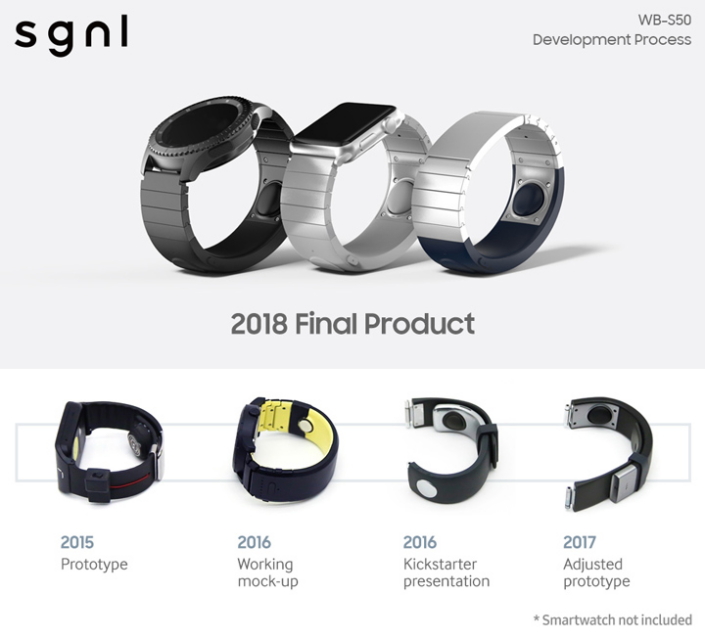 Sgnl WB-S50 was modified over and over again before settling on a stable, flexible, mass-production-ready final product

“I was worried about the product looking less innovative, because the users had to put a finger on an ear to make a call so I conducted global consumer research with a mockup model,” said Choi. “As a result, I found out that people liked putting a finger on an ear. They liked it more, because it was a traditional motion of making a phone call, it felt more intuitive, and you could let other people know that you were on the phone.”

But what felt like a setback opened up new opportunities. Everyone has different bone structures so the same vibration pattern can create different signals for each person. This could be used as a security tool in the future in the similar ways to fingerprints and irises. For example, this technology could be used in the future to open doors just by holding the doorknobs that recognize the unique vibration patterns, nullifying the need of a separate key.

Despite the promising potentials of body conduction technology, mass production for Sgnl presented a series of challenges. Innomdle Lab had to work with partners to create the circuits, mouldings and injections. Over a three-year period, the company was spurned by many potential partners and let down by many others who over-promised and under-delivered.

“Many of them didn’t even let us in for a meeting, and we had to beg for them to make our products even if we were paying for that,” said Choi. “Startups have to find good partner companies. We have changed manufactures many times and the launch was delayed for about a year. In terms of money, this cost us an estimated loss of one billion won.” 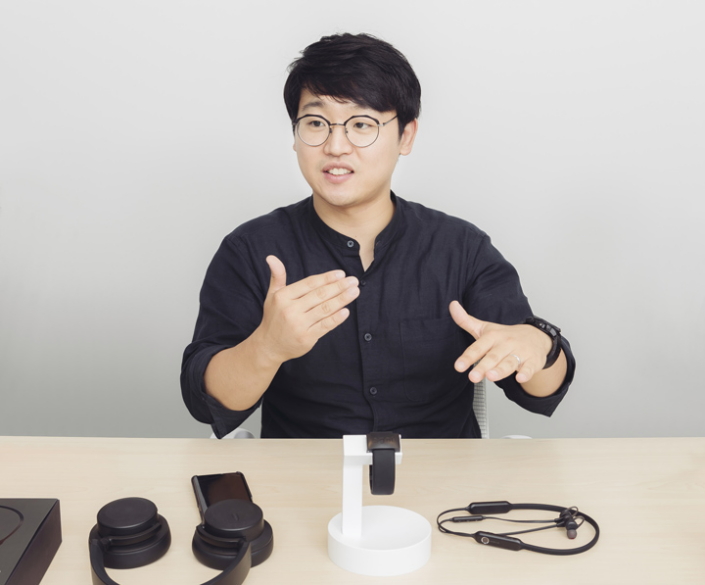 “Most startups in Korea are software companies,” explains Choi. “We didn’t have anyone to ask for advice on manufacturing partners. It was a tough learning experience finding the able and reliable ones.”

With these experiences now in his rear-view mirror, Choi advocates for startups, especially fellow C-Lab spin-offs, to share information with each other about their experiences with partners to help others from falling into similar cycles of delays and losses.

But it all paid off. Innomdle Lab now has a product they’re happy with and they’re in a place where they can mass produce the Sgnl product. For Choi, he’s glad he was able to persevere and learn more about his product, the target market, the technology, and more importantly, himself as an entrepreneur.

Innomdle Lab was founded on the vision of being a medley of innovation. The ethos is based on the fact that most startups live and die by a single product, and if that product fails, the entire company follows suit. Innomdle Lab believes it can continue to innovate as long as it can maintain its processes. Although Sgnl is a long time in the making, the second product was only in development for seven months. 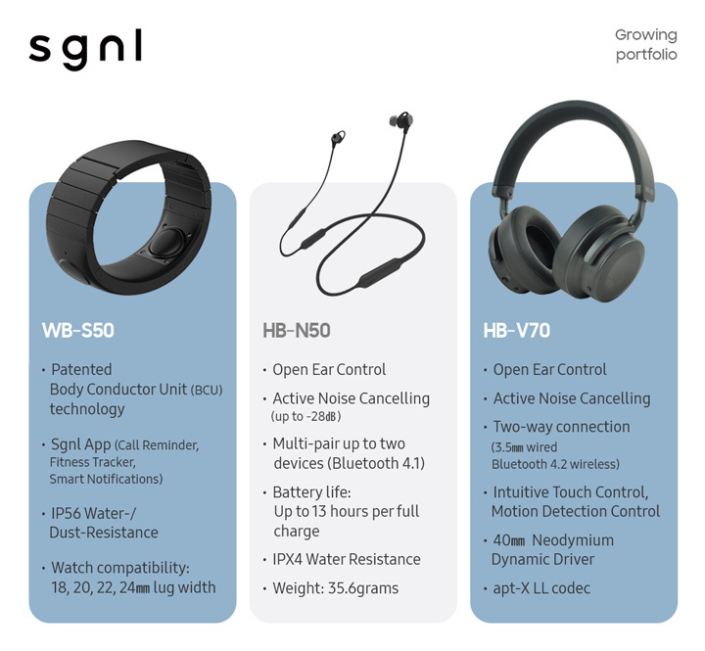 Based on continuous R&D, Innomdle Lab is already expanding its hearable device portfolio

The company is working hard to keep the drum beating with another noise cancelling hearable device coming up as well as technologies outside of the audio product category in the R&D pipeline.

Continuing the Tradition of Open Innovation

Choi places a great emphasis on the importance of the C-Lab project and the opportunity he has been able to pursue that would have been much more difficult otherwise. He remains a strong supporter of the incubator/spin-off model to the point that he plans to replicate it in his own company. His door also remains open for other C-Lab spin-off companies who follow after him.

“Everyone here is very talented, but they are currently working for a small startup. They have to be rewarded for their sacrifices and ambitions,” said Choi. “I want to give my team members the chances to start their own companies and for Innomdle Lab to be an academy for them to acquire the necessary skills to do so. By doing this, we can create a medley of innovations that expands beyond my company. I want to keep creating new cycles of innovation.” 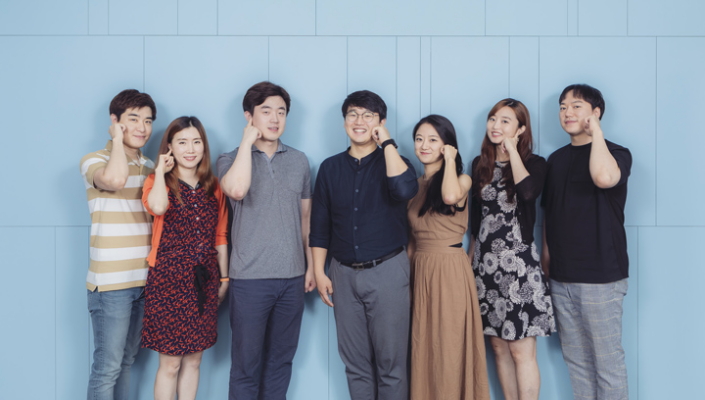 Choi was fortunate in that he had a lot of support at the spin-off stage from Samsung Electronics’ management. There were a lot of naysayers who suggested to Choi and the other C-Lab startups that this was simply another way to lay off staff. But one staff member put this assertion to an executive, who oversaw the spin-off initiative, directly in a meeting.

“I still remember his answer,” Choi recalled. “He said that Samsung Electronics cannot commercialize every idea, no matter how hard you work on the project. He saw many small- and medium-sized enterprises (SMEs) or startups succeed based on those ideas.” Samsung wants to give chances to such brilliant ideas and the people who worked hard for the opportunities “and it would be even better if the entrepreneurs could build on the expertise they honed in Samsung,” Choi recalls the president saying. “If the spin-off companies survive for five, or 10 years in the jungle of competition, then Samsung would ultimately be contributing to the larger tech community. Wouldn’t that be a great way for large and small innovation companies to coexist?”

This article is the first of a four-part series to celebrate the three-year anniversary of the C-Lab spin-off program. For more information, tap the image below: