The Gear 360, Samsung’s first 360-degree camera, allows users to preserve their memories in a whole new way. At the same time, the device has been catching consumers’ attention with its unique and aesthetically pleasing design. So how did its makers come up with the design? 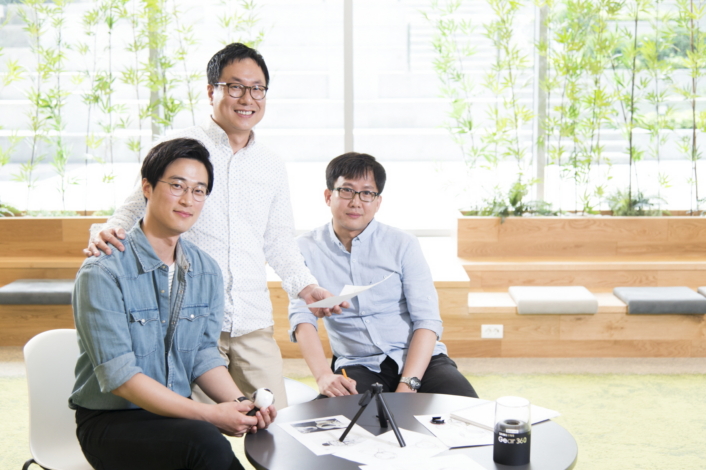 Q. How did you first come up with the idea for the Gear 360’s design?

Minki Ham: The idea actually started out quite small. When the product planners asked for feedback on an initial idea, our thought was “that’s worth testing.” At first, we were not really sure whether the concept would fly. However, the burgeoning Virtual Reality industry made us increasingly confident about the opportunities 360-degree cameras could create.

Kyunghan Noh: Many designers of the Gear 360 had worked on camera projects before, but we didn’t take a standard approach this time around. We considered it as a whole new category of product, which required a new creative approach. We had to start from scratch because its imaging experience is very different from that of most cameras.

Q. Tell us a little about the Gear 360’s design concept.

Minki Ham: We began the process by asking fundamental questions about how the device would be used, its imaging quality and other important issues. The Gear 360 is sleek and minimal on the outside, but it is a 360-degree imaging device designed for daily and outdoor use, and features sturdy hardware on the inside.

When we started drafting the Gear 360’s design, there were already quite a few 360-degree cameras on the market, but some required professional knowledge to use or were bar-shaped. Those obviously have their own advantages, but we really wanted to address the limitations of them-available designs with the Gear 360. For instance, bar-shaped 360 cameras can be attached to a head mount, but they may not be as convenient to use.

Q. Where did you find inspiration for the Gear 360?

Kyunghan Noh: It was inspired by the helmets astronauts wear in space. These helmets look sleek, seamless and minimal, but also feature very sturdy inner structures. The idea of providing 360-degree images also played a major part. Unlike regular cameras, the Gear 360 captures images in a 360-degree field of view. The images it captures are spherical, so it made sense to create a globe-shaped camera that offers a consistent viewing experience from any angle.

Q. What kind of challenges did you need to overcome for this project?

Kyunghan Noh: In terms of design, our top priority was to make this new-type camera appeal to customers. We needed the Gear 360 to have a whole new product look, one that set it apart from existing devices. The challenge for us was to enable it to create images that were totally different, but to do so without losing the essential elements of a 360-degree camera.

The LCD display on the top of the device was actually not an original feature of the design plan. At first we thought that the menu, functions and other information could be displayed on a smartphone screen, as users need to pair it with a smartphone in order to view and share content. However, we later realized that to do so might not result in a truly intuitive design. We wanted to make it intuitively clear to users as they first set eyes on the camera which buttons they needed to press to start recording or change the recording mode. That is why we ended up adding a display to the finished device.

Woojung Moon: As the Gear 360 is spherical, users don’t need to think about where the front or the back of the device is. But as this design was somewhat new for many customers, people would often ask us questions like, “Where am I supposed to look when I’m taking a selfie?” or “What angle should I be looking at the display from?” We also had to decide where to put the display and control buttons, as a spherical camera does not have a front, so to speak.

We initially thought the best way to use the Gear 360 was to put it on a flat surface using its tripod, or to hold the tripod when taking a picture. But to our surprise, many people suggested holding the body or pushing buttons, even though this could mean one of the lenses might be covered by the user’s hand. I have video recordings and images captured using the Gear 360 on my smartphone to show to people who are not familiar with it. 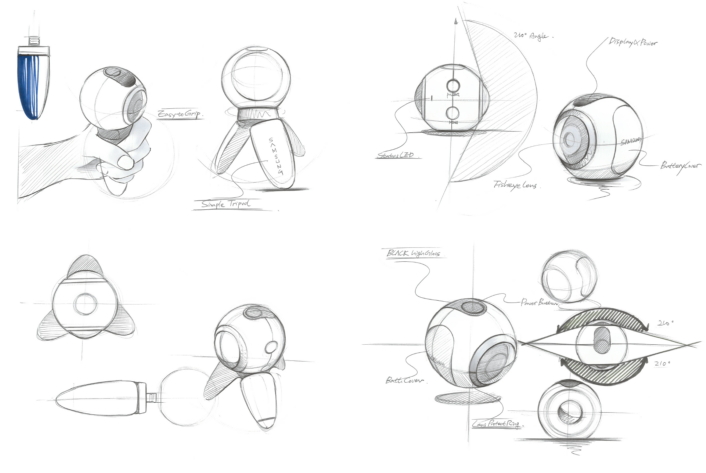 Q. How and why did you choose the colors and materials for the Gear 360?

Woojung Moon: In terms of the color choice, we first had to decide whether the Gear 360 was going to be positioned as a standalone product, or if it was going to be matched together with Samsung smartphones and the Gear VR. The idea of unveiling a new-concept product in a whole new color might have helped draw attention to the Gear 360. However, we thought that as users might want to get more out of it by using it in conjunction with the Gear VR, it would be better to use the same white and black color scheme as the Gear 360 for consistency. In terms of materials, we used optimal solutions that would prevent overheating and also help increase the device’s portability. Unlike the Gear VR, though, the Gear 360 is suitable for outdoor use as well. Therefore, we went with materials which are resistant to contaminants and applied a non-slip coating to the accessories for outdoor usage.

Q. The Gear 360 comes with a tripod. Can you explain a little about this and the accessories’ design?

Minki Ham: During the development, we realized that in order to increase the Gear 360’s usability and portability, it needed a tripod. That’s why we started to think about size and designs that would be a good fit with the body. We designed the body and tripod to fit together as a complete package, and used the same design language for both.

Woojung Moon: As the spherical shape makes for quite a unique design, we also had to think long and hard about how we could make accessories that would match with the Gear 360. Camera accessories are often functionality-focused, and thus can sometimes feel mechanical or tool-like. It is often the case they are not very well designed from an aesthetic standpoint. As they are often large in size, they can sometimes look mismatched when they are connected with the main devices. One benefit of the Gear 360’s spherical design is that you can attach it to a whole range of surfaces. You can even use it on a helmet using its camera mount. That is why, in addition to the standard package, we also developed a Value Pack, which includes the camera mounts (suitable for both curved and flat surfaces), as well as a tripod that is twice as long as the standard model.

The standard tripod is designed to be stood on surfaces, while the value pack tripod can also be held in the hand like a selfie stick, and features a remote control. You can also attach a range of accessories to the universal tripod hole for greater compatibility and convenience.