Just as the analog film camera evolved into the digital camera, so too is the 2D, digital camera now transforming into a more immersive, 360-degree experience. Until recently, 360-degree content required a complicated production process that was mostly done by professionals. But now, the Samsung Gear 360 enables users to capture every angle of their lives, putting the immersive power of 360-degree content right into anyone’s hands. Let’s take an in-depth look at what’s inside this innovative new camera. 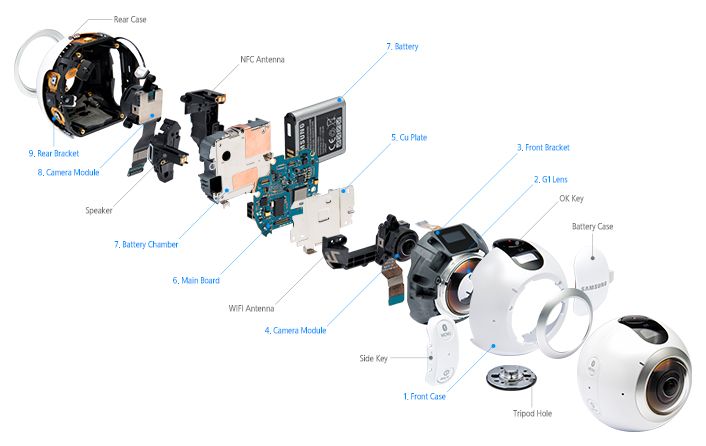 Spherical and streamlined, the case of the Gear 360 is designed to support your freedom of movement. Small enough to fit in your hand, you can take your Gear 360 with you with total convenience.

The case is sturdy and compact, good for all for favorite activities, from camping to al fresco dining. The case is IP53 dust and splash resistant, keeping it safe in most conditions.

In addition to the durable, elegant casing, the Gear 360 features the industry’s first tempered glass with a circular design. The tough, tempered glass makes the camera good for indoor or outdoor use, to best suit your needs.

A strong bracket is necessary to ensure the Gear 360’s many parts are secure and functioning optimally, and forms the core of the device.

On one side of the Gear 360 is the 0.5-inch PMOLED display. The 72-by-32 pixel screen is convenient to use, letting customers select image or video and a variety of modes and settings. You can start or finish shooting the video or still image by pressing the OK Key.

The Gear 360 features two CMOS 15 megapixel fisheye lenses, each of which can capture high-resolution images and videos in 195 degrees. Software can then stitch them together to create uninterrupted 360-degree content—up to 3,840 x 1,920 for videos or 7,776 x 3,888 for photos. The accelerometer and gyroscope sensor ensures your content are in perfect 360 degrees, constantly adjusting the cameras’ movements. In addition, both lenses are also F2.0, letting you capture vivid, bright images in lower light conditions.

The Gear 360 offers a variety of shooting modes—in addition to regular photos and videos, there is time-lapse video (for slow events, like sunsets) and looping video (for creating seamless action that repeats).

As the Gear 360 has such a powerful collection of specs, protective measures are needed to prevent it from overheating. The device has a variety of materials inside to ensure heat is kept under control, including a copper (Cu) plate and other thermal interface materials (TIM).

The microSD card slot here can support memory cards of up to 200GB, so you’re assured you’ll always have plenty of space to record all the content you want.

The battery chamber is designed to hold a 1,350 mAh lithium ion battery, powerful enough to record up to 140 minutes of video.

The Gear 360 features two CMOS 15 megapixel fisheye lenses, each of which can capture high-resolution images and videos in 195 degrees.

You can navigate the shooting options easily on the display, choosing video or still images, 180 degrees or the full 360 degrees. Just press the Menu key, then select Settings, and then Switch lens.

The Gear 360 features a wide range of connectivity, including Wi-Fi direct, Bluetooth, NFC and USB Port, so it is easy to share videos and photos, make films and edit workflows, right from your smartphone or PC. For instance, the Samsung Gear 360 Manager is a mobile app that lets you control and view the Gear 360 content from your smartphone in real time, as well as share those videos and images. For the PC, Gear 360 ActionDirector connects to the Gear 360 for editing, viewing and sharing pictures and videos. Gear 360 ActionDirector makes it easy to share your content, too, whether with YouTube, Facebook, Google Street View or other online services.

The bracket houses other key features of the Gear 360, including the microphone, speaker, and the mount, which can connect to a tripod. Various third-party accessories can also be attached to the universal tripod hole, like mounts or a release buckle. 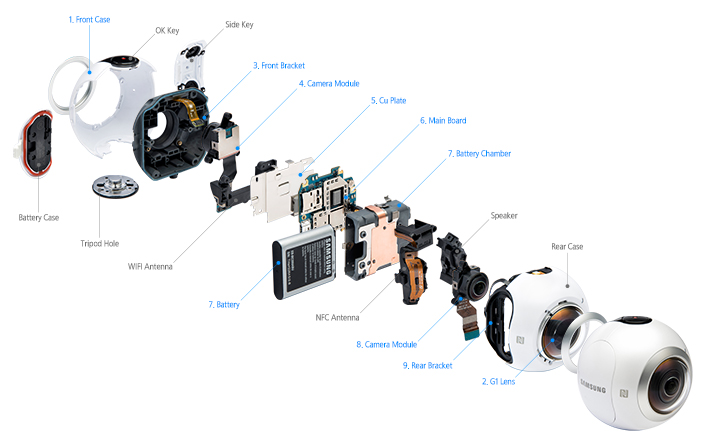