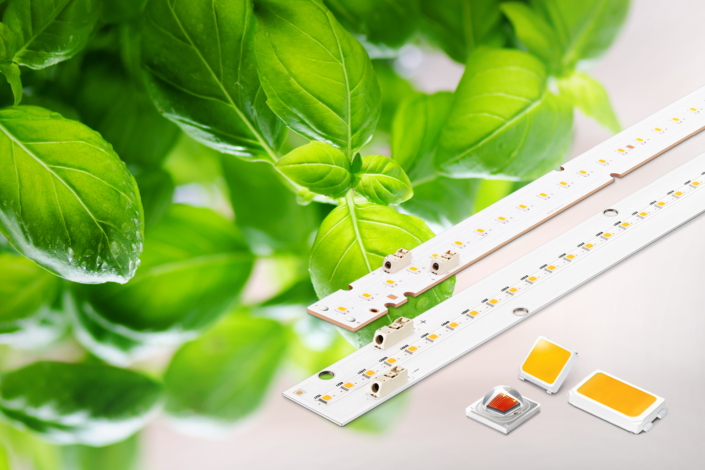 “Our horticulture LED solutions are based on LED technologies that deliver proven levels of performance and reliability across an extensive range of lighting applications,” said Yoonjoon Choi, vice president of LED Business Team at Samsung Electronics. “By broadening our lineup to include horticulture LEDs, we are providing global luminaire manufacturers with a one-stop resource for these solutions as well as for our many other LED technologies.”

Samsung’s new horticultural LED – the LH351B Red – is a high-power package providing a wavelength of 660 nanometers (nm) with a photosynthetic photon flux (PPF)* value of 2.15 micromoles per second (μmol/s) (350mA), making it optimal for most types of horticulture lighting. The 660-nm wavelength helps to accelerate the growing of plants including their photosynthesis, as well as enrich the blooming of flowers. The package also features a very low thermal resistance of 2.0 kelvins per watt (K/W), allowing for easier heat dissipation within LED luminaires. Moreover, the LH351B Red uses the same electrode pad design as its LH351 series counterparts, enabling greater PCB design flexibility in luminaire manufacturing.

In addition, the white LED packages and modules feature extremely high light efficacy of 2.92 micromoles per joule (μmol/J) (65mA), 2.72μmol/J (65mA), 2.43μmol/J (0.45A, 21.9V) and 1.76μmol/J (1.38A, 46.9V), respectively, while the LH351B Red delivers 3.13μmol/J (350mA). These high efficacy levels minimize the impact of lighting on ambient temperatures, allowing growers to better control temperatures in almost any greenhouse environment and save on energy costs.

Samples of Samsung’s horticulture LEDs are available now and will be showcased at LIGHTFAIR International 2018 (booth #1112) in Chicago, Illinois (USA), May 8-10.

* Editor’s Note: PPF (photosynthetic photon flux) is a unit that measures the total amount of photons in the photosynthetically active radiation (PAR) range – a spectral range between 400 and 700nm that supports plant photosynthesis.