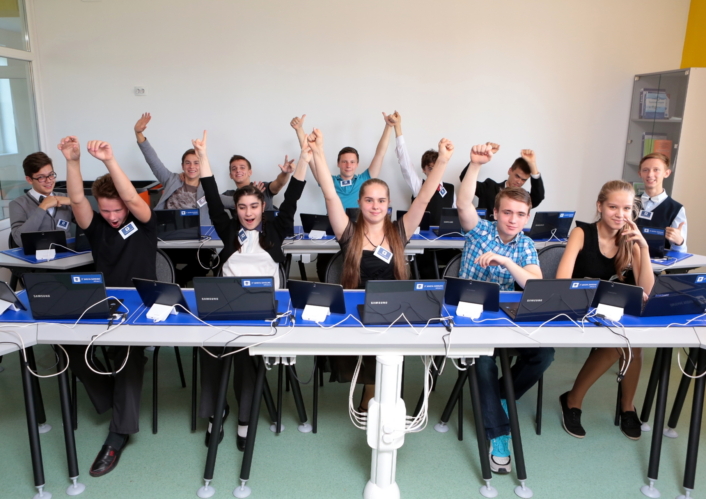 Samsung Electronics, a global leader in advanced technologies, unveiled its milestones in the sphere of corporate social responsibility at the CIS Forum 2016 and marked the key areas of its social project strategy for the year 2016.

Changing life for the better Samsung Electronics demonstrates superior standards in human relations and corporate social responsibility by successfully implementing its projects in the sphere of education, culture and sports.

Samsung Electronics has an unwavering passion for education. The company implements its project IT SCHOOL SAMSUNG, an additional education program teaching basic IT and programming skills for senior high school students. A one-year course is developed by Samsung Research Center in cooperation with Moscow Institute of Physics and Technology and aims to facilitate preparation of future IT professionals and engineering personnel by guiding them from senior high school and thus satisfy the highest demand for such technical talent in our country. The project will educate more than 5000 high school students over the span of 5 tears and focuses on boosting interest in innovative technologies for youth. IT SCHOOL SAMSUNG is implemented with the support of the Russian Ministry of Education and Science and regional education bodies in more than 20 cities across Russia from Kaliningrad to Vladivostok. 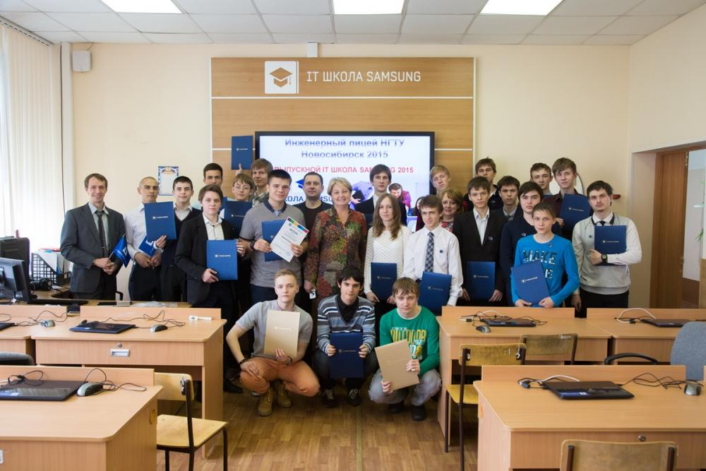 Samsung Electronics is a long-standing supporter of WorldSkills, an international non-profit organization aimed to boost social prestige for vocational trades and develop professional skill education. In 2016 Samsung Electronics and the Organization of vocational trade communities and skilled professionals development WorldSkills Russia signed an agreement on mutual understanding and expansion of cooperation. As part of the agreement Samsung Electronics undertakes to educate and provide training for the members of the Russian squad for WorldSkills Competition 2017, the world vocational education and skills excellence championship among young specialists, which will take place in Abu Dhabi. In 2016 three Kazan-based students, members of the National Russian Squad, will have their training at Samsung Skills Center (Suwon, South Korea), a unit of Samsung Electronics set up for educating young specialists and boosting their professional skills.

As part of the international corporate project “Hope for Children” Samsung implements its program “Education for All” aimed to help children and teenagers with disabilities in the sphere of education and career and create equal opportunity for their training and communication. Since 2014 as part of the “Education for All” program Samsung Electronics has been the technology and social partner of the network education community “UchimZnaem”, an innovation education program for children in long-term care, implemented with the support of the Russian Ministry of Education and Science and the Russian Ministry of Health. In 2016 further development of the project in different regions of Russia is expected. 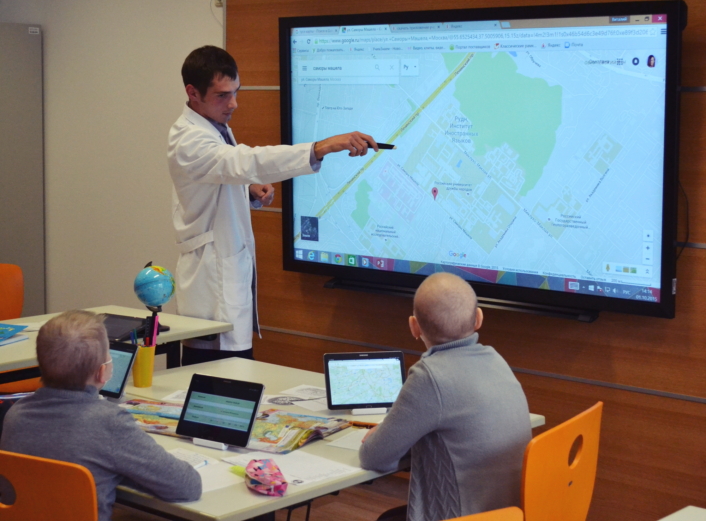 Samsung has been the partner of “UchimZnaem” education program since 2014.

Samsung Electronics is the oldest partner of the State Academic Bolshoi Theater celebrating the 25-year anniversary of cooperation in 2016. The company is a long-term partner of partner of the State Hermitage Museum and partner of the Peterhof State Museum-Reserve. The close cooperation was showcased by the launch of the education center of family art and child intellectual development at one of the world’s most popular museums – the Peterhof with the help of the educational solution Samsung School. While at the education center of Moscow Museum of Modern Art (MMOMA) the Samsung facility room is used successfully not only for holding classes but also for interactive guided tours. The mobile application “Art of Feeling” allows MMOMA’s visitors to gain a deeper insight into the conceptual thinking of modern art authors, share impressions and create their own masterpieces with the help of mobile technologies.

Actively fostering culture development, Samsung in cooperation with the L.N. Tolstoy State Museum is a co-founder of the annual Yasnaya Polyana Book Award, which has become an invaluable guide for avid literature readers. In 2015 announced as the Literature Year the Yasnaya Polyana award became the biggest book event in Russia and with the creation of the “Foreign Literature” category it successfully propelled itself on the international stage. As part of the Literature Year Samsung introduced its mobile application “LivePages”. The project aims to foster youth’s interest in the best works of literature classics through interactive mobile technologies. The first classic book that has become available in the new format was one of world’s greatest novels – War and Peace by L.N. Tolstoy. Currently the launch of another literary masterpiece is underway – the winner of the voting among 100,000 users of the application – Crime and Punishment by Dostoevsky. The app allows readers to see the events of the novel through the real historical context and use computer text analysis to follow how the characters’ destiny paths are intertwined, follow their routes on the map. Audio tours, infographics and other interactive scenarios offered by the application also inspire a fresh look at the masterpieces of classic literature. 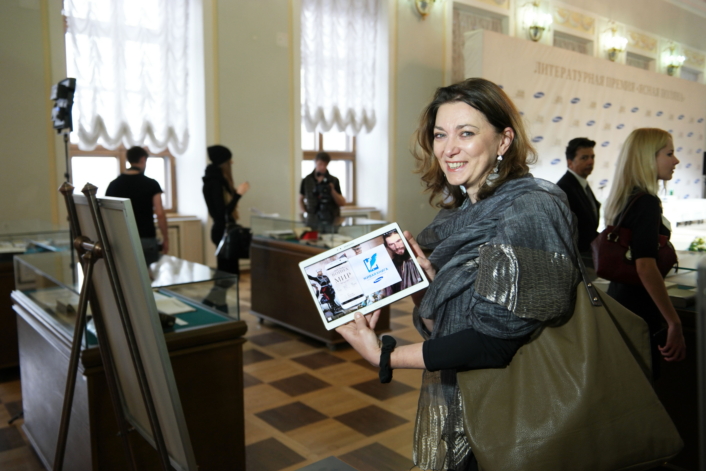 Samsung Electronics supports a healthy and active lifestyle across the world. The company is the long-standing Worldwide Olympic Partner and implements a number of sport projects. It serves as the official partner of Russian junior tennis national teams and as the organizer of women’s youth championship Samsung Cup Russian Tennis Round (RTT). Since December 2010 Samsung Electronics is the general partner of the All-Russian youth swimming competition “Aleksandr Popov Cup” held in Yekaterinburg on an annual basis.

Samsung Electronics facilitates better access to technologies and solutions for people with disabilities creating equal opportunity with its technologies and actively develops corporate volunteer movement as well through its application “Karta dostupnosti”, a unique online reference guide for the no-barrier environment in Russia.

Samsung Electronics’ corporate charity programs have received high recognition from the state, professional and business community. The company is a winner of a number of Russian and international awards, such as the “Corporate Charity Leaders” award bestowed by the Russian Ministry of Education and Science in the “Career Guidance” category at the 1st All-Russian competition of employers’ best practices on working with children, youth and personnel pool “Creating future”; the “Education and Science” category award as part of the national program the “Best social projects of Russia”; the national award in the sphere of sports and healthy lifestyle support “Sport and Russia” in the “Best interactive experience of the year” category; the “Silver Archer” award in the “Best project in the sphere of social communications and charity” and many others. In 2016 the company intends to continue to actively develop its social and educational activity making a major contribution to the socially responsible and stable future.

“We are dedicating all our unique experience of creating cutting-edge technologies and solutions that make a significant contribution to the development of society. Samsung is a socially responsible company that fosters positive changes helping more and more people discover a life full of new opportunities”, said Sergey Pevnev, Director of Corporate Relations at Samsung Electronics’ CIS headquarters.