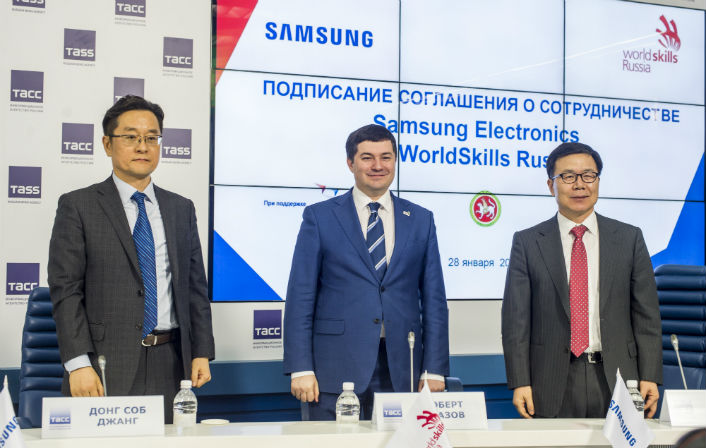 Samsung Electronics, the world’s leading manufacturer of consumer electronics and mobile devices, and WorldSkills Russia, the agency of development for professional communities and skilled workers, announced that they signed an agreement of mutual understanding for their cooperation on educating and training the Russian National Team members at the Samsung Skills Training Center in Suwon, Korea, in preparation for the young professionals’ WorldSkills Competition 2017 in Abu Dhabi, United Arab Emirates.

Members of the national team were chosen from the WorldSkills national competitions in 2015. Two members for “Mobile Robotics” competency, Pavel Fadeev and Andrey Dybanov, both fourth-year students at Kazan’s College for Information Technologies and Communications, were chosen at the  WorldSkills Hi-Tech-2015, the second national championship for working professions that took place in October, 2015 in Yekaterinburg, Russia. Another participant, Albert Mineev, a second-year student at the Kazan National Research University, was invited to join the team at the First Inter-University WorldSkills championship on Mechanical Engineering Design-CAD that took place in December 2015 at the Moscow University of Mechanical Engineering.

“We highly appreciate the cooperation from organizations that provide trainings for modern, highly skilled workers. We have something to learn, and at the same time, we have educational institutions that already provide the highest level of trainings to prepare highly skilled specialists. We are confident that this mutually beneficial partnership will benefit both the Russian Federation and the countries with which we cooperate,” said Alexander Klimov, Deputy Minister of Education and Science of the Russian Federation.

“We thank Samsung Electronics for the opportunity to develop skills such as ‘Mobile Robotics’ and ’CAD’ within Samsung Skills. Thanks to Samsung’s technologies, we can use our championship and training systems as a driver for the Russian economic system in the context of trainings for skilled workers,” said Robert Urazov, General Director of WorldSkills Russia.

“Today’s agreement is an example of how we should learn from the best. We recognize Samsung Skills, which internally produces effective training programs. We are pleased to collaborate with our colleagues and learn from their best,” said Dmitry Peskov, Director of “Young Professionals” Direction at the Agency of Strategic Initiatives.

“We are very pleased that today, Samsung, which already has a successful partnership with the Republic of Tatarstan, is entering a new phase of partnership to prepare our experts for participation in the upcoming WorldSkills championships in 2017 and 2019. I am sure, with Samsung’s help, the participants will obtain good results,” said Vasil Shaykhraziev, Deputy Prime Minister of the Republic of Tatarstan, Russia.

“In the framework of the new agreement, we will continue fulfilling our commitment of providing education for the championship participants in order to create a competitive national team using all the experience we have gained from participating in previous WorldSkills Competitions. Supporting gifted young people is our strategic priority. Today, on behalf of Samsung Electronics, I am glad to officially announce our commitment to educate and train Russian participants for the WorldSkills Competition in 2017,” said  Uitack Kim, President  & CEO of Samsung Electronics CIS .

“We are entrusted with the great responsibility and honor of educating Russian specialists in the lead-up to the WorldSkills Kazan in 2019. We will do our best to meet the championships’ high expectations. We believe that our long-term experience and innovative approach will allow us to educate the competition participants at an appropriate level and help increase the prestige of technical professions among young people,” stated Dong Seob Jang, Secretary General of Samsung Skills and Vice President of Samsung Electronics.

This is not the first time that Samsung Electronics has offered training sessions for the WorldSkills Competitions. In 2014, Vietnamese participants took part in similar sessions and won the first medal for their home country at the WorldSkills Competition Sao Paulo in 2015. Such initiatives will help Russia to gain global experience in the technical professions realm, which corresponds with the goals of the WorldSkills Russia Union: to study the best world practices in the area and increase the number of Russian participants in international competitions in accordance with WorldSkills standards.

Samsung Electronics has supported the WorldSkills movement as a Global Partner and a top-level sponsor of WorldSkills Competitions since 2007. Samsung has also been an official provider for the WorldSkills Russia Union since May 2015, offering long-term support for WorldSkills in Russia.