Celebrate The Arrival Of The Galaxy Note8 with Bigger Rewards! 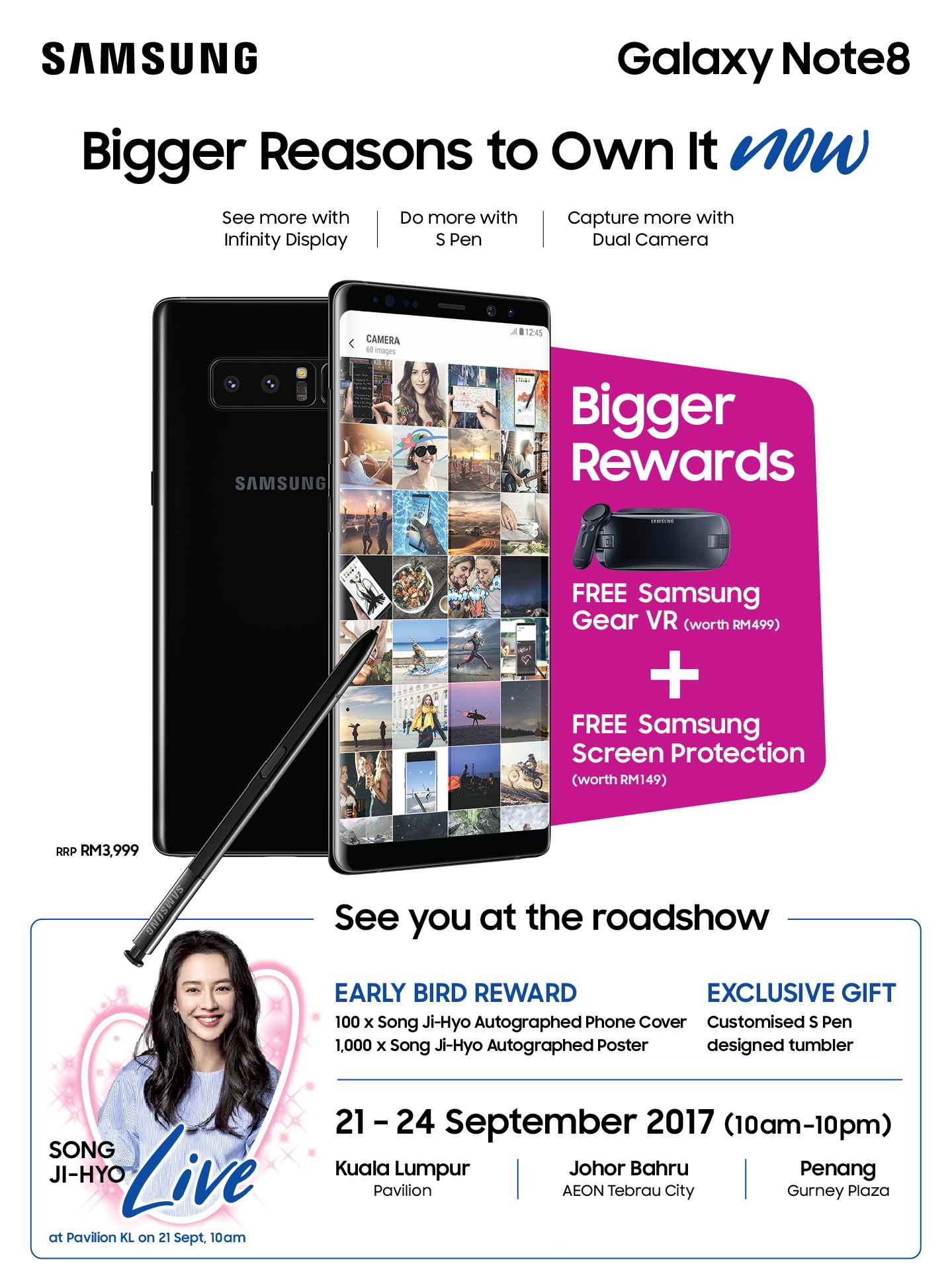 Kuala Lumpur, 18 September 2017 – Since its official unveiling in New York, interest in the Galaxy Note8, Samsung’s brand new flagship, has been sky-high. Pre-orders for the device saw tremendous response and although that is now over, Samsung Malaysia Electronics will continue its celebration of the Galaxy Note8’s impending arrival to Malaysian shores.

To celebrate the official launch of the Galaxy Note8 in Malaysia, Samsung invites you to be a part of a nationwide roadshow where consumers will have the opportunity to own the ultimate productivity device along with exclusive deals and promotions!

From the 21st until 24th of September 2017, Samsung invites all Galaxy fans and tech enthusiasts to Do Bigger Things with the Galaxy Note8 firsthand at various locations across the country. Several roadshows will be ongoing at three locations simultaneously, at Pavilion (Kuala Lumpur), Gurney Plaza (Penang) and AEON Tebrau City (Johor Bahru). The roadshow queue at Pavilion (Kuala Lumpur) will start at 11am onwards, while the sales of the Galaxy Note8 will officially begin at 12pm. The roadshows at Penang and Johor Bahru will commence from 10am onwards.

For every purchase of a Galaxy Note8 during this 4-day celebratory period, customers of the roadshow will receive a free Samsung Gear VR worth RM499 and free Samsung Screen Protection worth RM149 that allows for a one-time cracked screen replacement (excluding Service Fee).

A bonus exclusive to the Pavilion (Kuala Lumpur) roadshow, the first 100 customers to purchase the brand new Galaxy Note8 will receive the opportunity to meet Running Man star Song Ji-Hyo on stage in person and collect a free Clear View Standing Cover autographed by the star herself.

Adding on to the fiesta, Samsung is taking the opportunity to reward Galaxy Note8 fans through Samsung Pay and mySamsung! For Samsung Pay, simply activate the app by provisioning a credit or debit card to redeem RM10 Petronas fuel voucher. Fans of the mySamsung app are also in for a treat thanks to complimentary goodies from The Coffee Bean & Tea Leaf, Clinique, Honest Bee, Air Asia, Agoda and Zalora!

Galaxy fans outside of the roadshow vicinity can also enjoy great deals during the roadshow period. Just head over to the nearest Samsung Experience Stores and enjoy exclusive bank promotion of 3x Maybank Treats Points and receive a free Dual Port Car Charger worth RM89 for every purchase of the Galaxy Note8 via Maybank 0% Ezy Pay Plan for a period of 12 and 24 months.

That’s not all, as Samsung is offering a special purchase-with-purchase offer for its Smart Care package. New Galaxy Note8 owners looking to further protect their device can purchase either the Samsung Protection (Promotion Price: RM88, RRP: RM149) with a one-time cracked screen replacement within the warranty period; or the Samsung Protection Plus (Promotion Price: RM238, RRP: RM298) that offers an additional 1-year warranty extension on top of the standard warranty and a one-time cracked screen replacement.

Samsung recently introduced the Galaxy Note8, the next level Note for people who want to do bigger things. With the Galaxy Note8, consumers get a larger Super AMOLED Infinity Display that fits comfortably in one hand, an enhanced S Pen to communicate in more personal ways, and Samsung’s first ever dual rear cameras to capture stunning photos. The Galaxy Note8 is designed for the way consumers lead their lives and lean on technology today.