[Interview] How the Gear IconX Got its Fitting Design

The Gear IconX earns its distinctive name because there’s simply nothing out there like it. Combining fitness tracking functionality with a completely cord-free listening experience, these earbuds were made for movers, and built to stay put. Senior Designer Seounghyun Son and Engineer Sunghan Park explain how the Gear IconX got such a fitting design. 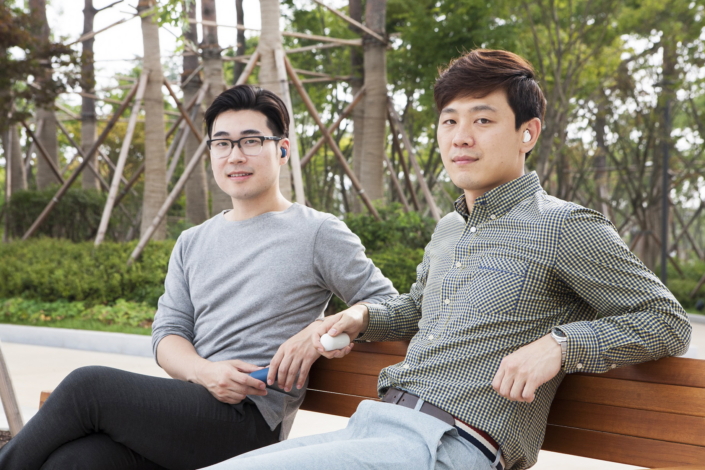 Q. How did you approach the Gear IconX’s design?

Seounghyun Son: For the Gear IconX, we needed a design that would be iconic as both a wearable and an audio product, and would reflect the company’s innovative identity.

When it comes to crafting wearables, too much focus solely on design can be a detriment, and can even cause a product to be uncomfortable to wear. For the Gear IconX, we focused on achieving a balance, so it wouldn’t become too complex, nor too simple. The smooth triangular shape of the earbud is modern and intense, and we shaped it just right in order to evoke the sophisticated aesthetic that Samsung pursues.

Q. How did you select the three colors?

Seounghyun Son: The Gear IconX was designed for fitness as well as everyday wear, meaning it had to be wearable not only when exercising, but in daily life, too. That’s why we selected an understated black, white and blue.

To be clear, the variations are black and lime, white and silver, and blue and cyan. The main body of the earbud was given a muted color treatment and accented with aluminum highlights. When decorating the Gear IconX, we deliberated on which combination of colors would yield distinct character. The combination of black and lime, for instance, is sporty, trendy and enduring. 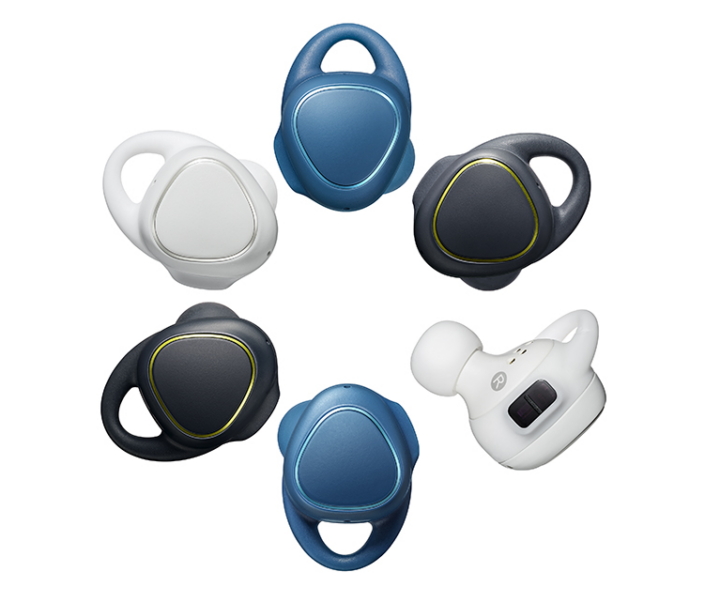 Q. What efforts were made to achieve an optimal fit?

Seounghyun Son: We measured the ears of numerous people, and they all differed in size and shape. So we focused on setting a range and finding a secure balance with the eartips and wingtips. There was no other way to test their fit but to try them out, one by one.

We adjusted the angle of the tip that goes inside the ear by 0.5-degree increments until we found the optimal slant. When it was decided, we altered the sizes of the eartips and wingtips and calculated an adequate range. In order to improve the fit, we conducted various internal tests, as well as satisfaction surveys with approximately 200 people who used the product during exercise.

Sunghan Park: There were a lot of factors to consider, as the Gear IconX is a small wearable device. For the wingtips, it was difficult to choose the three standard sizes, and we also put a lot of effort into honing the shape and choosing an ideal material.

The rubber wingtips wrap around the main body of the earbud, but they are thin and have holes, and can tear easily after being taken off several times. While a soft material would fit nicely, it would also tear easily. A harder material would be durable, but might hurt when worn.

In order to satisfy fit and durability requirements, the wingtips were given different intensities so that the part that directly touched the ear would feel soft and secure. It was also important to develop the product in a way that would allow it to remain pristine during use.

Q. What were some of the challenges in developing such a small product?

Seounghyun Son: It was nice to be in a position to set new rules—designing a new and completely cord-free product. But it was also challenging, as a lot of functions needed to be packaged in such a small frame.

Normally, sound quality improves with bigger drivers. However, we developed a new, smaller driver that could be loaded into the Gear IconX in order to facilitate both premium sound quality and a small frame. We also had to create enough room for an adequate touch area, and needed to consider how best to apply the aluminum detailing in order to achieve the premium-design aesthetic we were after.

Sunghan Park: The challenge was to create a structure that could fulfill various functions while maintaining a small profile. Structurally, the earbuds are divided into upper and lower parts, but these can become separated when subjected to external shocks, because secure connections are generally harder to achieve in small products. Also, if a user drops the Gear IconX, it will fall from a greater height than other earbuds. We therefore put a lot of effort into ensuring that the product would be stable and able to withstand falls.

Q. How did you incorporate the Gear IconX’s heart rate sensor?

Sunghan Park: The Gear IconX’s heart rate sensor slightly protrudes, because the function works better the closer it is to the skin. Finding the optimal angle and degree of that protrusion required several attempts.

We also carefully considered the design of the window covering the sensor. This process was more difficult than expected, because a change in the window’s shape would require modification of the left and right wingtips and the case design as well.

Q. Which factors did you focus on when making the charging case?

Sunghan Park: We were able to create a slim charging case by modeling its design after glasses cases, with a lid that could be closed after placing the earbuds inside. The lid’s design also required detailed consideration. The case needed to be able to be closed firmly for charging, but if it were too tight, the opening “click” would not feel right. So we found a nice balance.

The case matches the earbuds’ color, and we use a machine called a jig to hold and paint it. However, it was difficult to hold the case with the jig because it has a curved design and its inside also has curves corresponding to the shape of the earbuds. So finding a method to paint it evenly took some deliberation.