[Life@Samsung] Answering the Call: A Kiwi’s Journey of Discovery 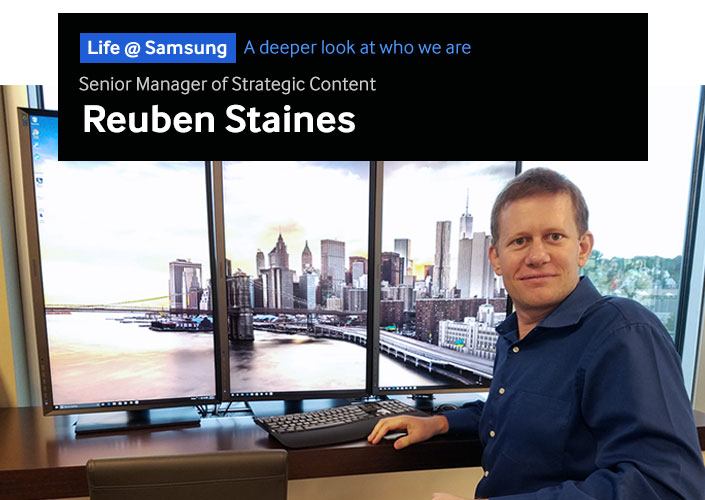 Ten years ago, New Zealand native Reuben Staines was a Kiwi abroad—living more than 6,000 miles from his home in the South Pacific. Following his graduation from Massey University, he moved to Seoul in 2002 to take a job as a Korea Times reporter. Now a senior manager of strategic content for Samsung Electronics, Staines reflects back on the move, and how it eventually led him to an exciting career at Samsung.

After four years at The Korea Times, Staines decided to apply for a role at Cheil, a marketing subsidiary of the Samsung Group, despite the fact that – in his own words – it “went against the grain” of his former journalism career.

“I had dreamed of working for a big brand, despite it being in the opposite direction of my career path,” said Staines. “And Cheil must have seen value in my unique background and global perspective, because they hired me as an account executive on their PR team.”

Staines quickly found that his career trajectory had taken on an incredibly fast-paced life of its own—much like the Samsung business environment he encountered. With Cheil, he helped forge a corporate brand identity for Samsung TV, before being offered a role on the client side.

In 2008, Staines was transferred to Samsung Electronics, where he worked with the international media and a global PR network.

“I could speak Korean pretty well,” he said. “But realistically, I didn’t have to use it that often. Samsung is such a globalized company that even the Koreans who worked in the Seoul headquarters spoke English fluently.”

Though he began his career before Samsung truly took off as a leading international brand, Staines said he understands why people consider it to be such a compelling place to work. In addition to fostering a truly global environment, Samsung makes a point of becoming a leader in every market it targets, two characteristics Staines believes many job-seekers find very attractive.

In 2012, Staines made the move to the United States to work with the Enterprise Business Division. Though he had spent the last six years on the planning side of PR, he was excited to find that this new role gave him the chance to execute strategy, once again paving the way for a new chapter in his career.

“Within just 10 years at one company I’ve had the opportunities to live abroad, explore my interests and strengths, and be a part of the innovative processes that make Samsung a true one-of-a-kind,” he explained. “Our employees are unusually versatile. Their ability to pivot and change direction without losing a step is unique for a company as big as this.”

Today, Staines is still a New Zealander abroad, leading the development of strategic content to drive demand across Samsung’s enterprise offerings in Ridgefield Park, New Jersey. He is also, not-so-coincidentally, the managing editor of Samsung Business Insights—a blog that highlights the company’s work throughout the business sector. It all goes to show that even after moving to South Korea and embarking on his incredible Samsung career, he still has not forgotten the path that brought him there in the first place.