The Galaxy S9’s Super Slow-mo and low-light camera features have been made possible thanks to a camera sensor that’s four times faster than conventional technologies.

Samsung Newsroom recently sat down with members of Samsung Electronics’ Mobile Communications Business team, who were behind the development of the Galaxy S9 and S9+’s camera. They include Dongsoo Kim and Sungwook Choi of the Camera Development team, and Youngmin Nam and Junmo Kim of the Product Planning team. The team discussed the camera’s unique-to-market features including Super Slow-mo, which enables users to record cinematic videos at 960fps (frames per second), and was made possible by the development of image sensor technologies that dramatically enhance the ‘eye’ of the camera. 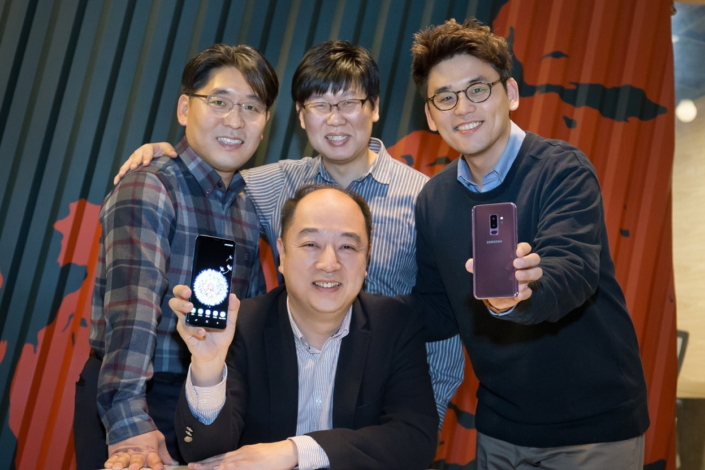 A Three-layer Stacked Image Sensor, including the Sensor itself, a Circuit, and a DRAM for Super Slow-mo and Low-light Capabilities

“We were able to achieve a readout speed that is four times faster than conventional cameras thanks to a three-layer stacked image sensor that includes the CMOS image sensor itself, a fast readout circuit, and a dedicated dynamic random-access (DRAM) memory chip, which previously was not added to image sensors,” explained Dongsoo Kim. “Integrating DRAM allowed us to overcome obstacles such as speed limits between the sensor and application processor (AP) in a high-speed camera with 960fps features.”

Enhancements to the image sensor, the Dual Aperture lens, and other camera features foster completely new experiences for consumers. For example, users can now capture a 0.2 second moment via the Super Slow-mo feature, and record beautiful scenery that is bright and clear even in low-light conditions.

Getting it Right through the Most Comprehensive Testing

While the Super Slow-mo prototype was already available, the developers continued to work on enhancements as well as subject the prototype to rigorous tests to prepare for commercialization. In the beginning, the function was only available through computers. So, in multiple instances, the team carted two or three laptops around Korean amusement parks in scorching summer heat. There, they tested the function’s Motion Detection feature, which automatically records the fleeting moment that the user wishes to capture.

“It wasn’t easy testing out Motion Detection for Super Slow-mo, especially with people staring at us when we brought our laptops to these amusement parks and took videos of fast-moving rides. However, we were all committed to getting the feature exactly right,” said Dongsoo Kim.

“We also shot for two hours in the middle of a mountain range, on a freezing night, to complete the low-light camera function,” recalled Sungwook Choi.

Enabling Users to Get the Most Out of their Smartphone Camera

With smartphones so intrinsic to people’s everyday lives, developing technologies that enable users to get the most of their camera was key. “The Galaxy S9’s camera focuses on ease of use of the Super Slow-mo function, from simple video generation to seamless sharing; a final GIF file typically ranges from three to 15 MBs, which is approximately six seconds in length and optimized for users to share and enjoy.

In the case of AR Emoji, My Emoji stickers can be shared via various messenger platforms. We’ve also enhanced the front camera, improving the user experience and adding fun features on top of advanced image quality. An example of this is the Selfie Focus function on the front camera, which recognizes faces from scenery based on deep learning features to provide an ideal selfie, and enables a background-blurring effect,” explained Youngmin Nam.

The future of smartphone camera development is headed in the right direction. “We will continue to strive for perfect, professional-quality images. But even more than that, our aim is to make it easier for users to share the results of our sophisticated camera technology. The ultimate goal is to develop a camera that always produces the best pictures for all users without tinkering with settings, allowing them to take photos and videos that satisfy their needs,” said Junmo Kim.