Samsung Pay Announces Support for Membership and Loyalty Cards in the U.S. 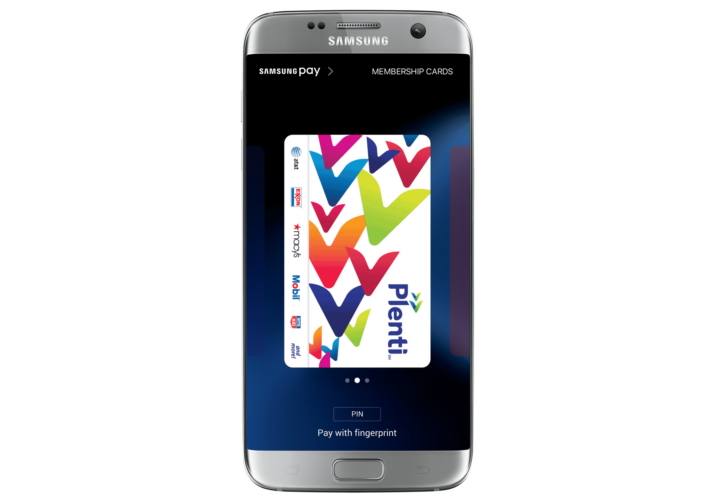 The average American household carries almost 30 loyalty cards.1 With the new feature announced today, Samsung Pay lets users access all of their merchant membership and loyalty cards from one, easy-to-use application on the supported Samsung Galaxy smartphone that is already in their hands. With Samsung Pay, users no longer have to worry about fumbling through their wallet to find the right card, or worse, forgetting it and missing out on savings.

Users can upload and store merchant membership and loyalty cards in Samsung Pay—including from their gym, drug store, grocery store or any of their favorite retailers. Samsung Pay’s new membership feature can also be used to store other cards such as insurance and personal identification cards for safe keeping. To use membership or loyalty cards, users simply launch the Samsung Pay app, select the appropriate card, hold their Samsung Galaxy smartphone screen up to the merchant’s scanner, and let the card’s barcode be scanned at the register

“With this new feature, Samsung Pay is giving users quick access to their favorite membership and loyalty programs and making shopping even easier,” said Nana Murugesan, VP of Strategy and Operations for Samsung Electronics America. “Right now, shoppers have several things—credit and debit cards, membership cards, coupons, gift cards—they need to take out of their wallets and scan at the register. Samsung is simplifying the check out experience by bringing those items to your phone, representing our next step toward a world without physical wallets.”

Samsung Pay, a mobile wallet service from Samsung Electronics, is simple, safe and works virtually anywhere plastic cards are accepted. Samsung Pay supports all major payment networks and many of the country’s major financial institutions, and it continues to expand its partnership ecosystem*. Click here for the full list of financial partners that support Samsung Pay.

SIMPLE: Samsung Pay is easy to use. Users simply swipe up from their eligible Galaxy smartphone, scan their fingerprint and pay at millions of merchants across the country.

ALMOST ANYWHERE: Samsung Pay is the most widely accepted mobile payment system. Samsung Pay works with the majority of existing and new terminals, including most magnetic stripe, EMV and NFC terminals. For more information on Samsung Pay, visit www.samsung.com/pay.