The Gear Fit2, Samsung’s GPS sports band, lets users monitor their health and get the most out of their exercise routines. Equipped with new features such as auto activity tracking, a standalone music player and step challenges, the device is perfect for casual exercisers and fitness buffs alike.

Manager Dongmyung Lee and Assistant Manager Jieun Suh of the Mobile Enhancement Team, Senior Designers Jonghwan Shin and Kyunghoon Han of the UX Innovation Team, and Manager Bumsung Cho and Principal Engineer Seongho Cho of the Service Development Team discuss how they made the Gear Fit2 optimized for fitness. 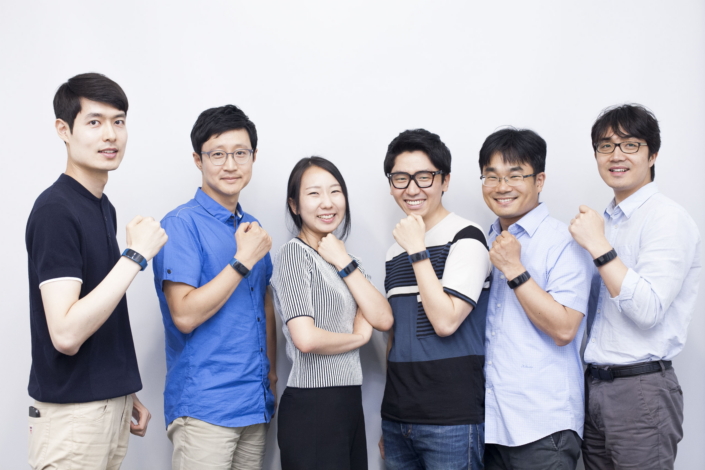 Q. What inspired the development of the Gear Fit2?

Jieun Suh: Just about anywhere you go—whether it’s New York’s Central Park or the banks of the Seine River in Paris—you can find people exercising with their smartphones, arm bands and earphones in tow. Recognizing that exercisers tote around these items to listen to music or use GPS tracking, we decided to develop a wearable device that fulfills these needs, and makes exercise more convenient.

We also noticed these people tend to closely monitor their general health and fitness activities. So, we put a great deal of thought into its concept so they can wear it all day to accurately track their fitness patterns and progress.

Kyunghoon Han: Because it’s a fitness product, there were some limitations in realizing the concept and testing it in the lab. Ultimately, the best way to really get a feel for it was to take it outside.

Honestly, I wasn’t interested in working out before the project, but started cycling regularly during the development of the device. After the product function was stabilized, I cycled halfway across Korea, which was an opportunity to check if the intended concept worked, and to see what needed to be improved. 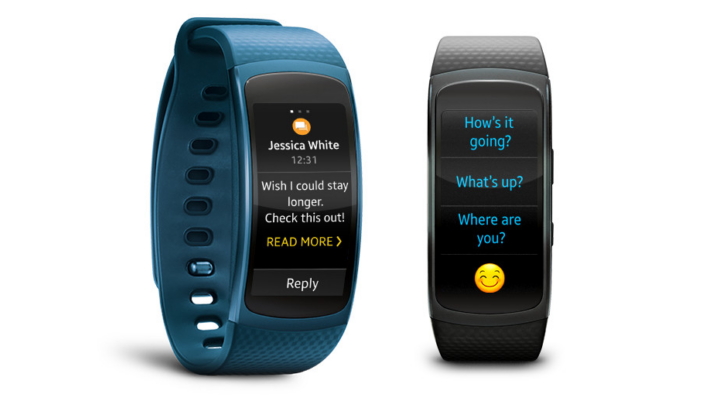 Q. What makes the Gear Fit2 different from other devices on the market?

Dongmyung Lee: We’ve improved upon every aspect of the previous model. In particular, the calculation of speed and calories burned is more accurate due to the better measurement of distance by the GPS. The course can also be indicated on a map.

There aren’t many fitness bands equipped with a GPS, and the few that do have the feature are generally heavy and unsophisticated. Also, the functions of the Gear Fit2 are more extensive than other products, as one can receive all the notifications you would normally receive on your smartphone. You can even reply to texts with simple preset messages and emojis.

Q. What was your major focus when designing the UX?

Jonghwan Shin: Our top priority in designing the UX was to keep the user experience simple. To do this, we followed a few basic principles. First, we focused on fitness, and reduced unnecessary functions. We planned to have the user wear the device every day. Next, we made frequently used functions such as “Start exercise” or “Record” automatic when the user engages in a prolonged session of exercise.

We also aimed to make the device a lifestyle product. So, we studied consumer lifestyle patterns during the early production development stage to ensure that the device reflected individual preferences.

Kyunghoon Han: To maximize the identity of the Gear Fit2 as a fitness product, numbers and infographics were a big focus. The number font is thick and clear compared to previous products, and was developed especially for this device. Geometrical graphics not commonly used before were incorporated so that the user can intuitively check their daily activity by simply swiping the fitness widget screen.

Regarding user behavior, we focused on striking a balance to satisfy both beginners and advanced users simultaneously. While some beginners might have just begun to develop an interest in fitness, there are also more professional users who need a device that will record more advanced activities.

One way we did this was by allowing them to initiate the “Stop workout” function with a hard key. It prevents the “ghost touch issue,” in which workout data is not recorded as a result of accidental screen touch.

Q. What features did you incorporate to motivate users?

Kyunghoon Han: We designed the UX so that it doesn’t propose unattainable goals in the initial stages of use. Instead, it improves a user’s fitness capabilities gradually over time.

For example, if the user doesn’t move for an extended period of time, a notification reminds the user to get up. Or, should the user walk at a certain pace for more than ten minutes, the screen displays the “Healthy steps” notification and records the workout time.

The “Number of floors climbed” function is also the result of contemplating how to increase the intensity of daily activity rather than just the frequency of it.

Q. The Gear Fit2 can automatically detect certain activities. How did you select these particular exercises?

Dongmyung Lee: Based on our research, we understood that the three most common exercises are running, walking and cycling. So we decided to make recording these specific exercises more convenient by creating an automatic recognition feature. If the user engages in one of these activities for more than 10 minutes—the minimum amount of time for aerobic exercises to be effective—the device records the activity. Elliptical trainer and rowing machine sessions can also be automatically recorded.

Q. Why did you incorporate a standalone music player in the device?

Jieun Suh: Research suggests that more than 75 percent of joggers listen to music while they run. Even when out for a casual walk at the park, most people prefer to listen to music. So, a music player is an essential function for a fitness device.

The Gear Fit2 has its own storage space—a feature that differentiates it from other products, which generally play music via a synced smartphone. Music can also be sent from the phone to the Gear Fit2 through Wi-Fi Direct.

We also considered the fact that it’s not necessarily the music player that influences one’s workout, but rather the function of music itself. Knowing that upbeat music can help create a steady exercise rhythm, we made it possible for more rousing songs (those with tempos ranging from 120-140 beats per minute) to be automatically detected and saved to a separate “Workout” playlist when a user sends music to the Gear Fit2. 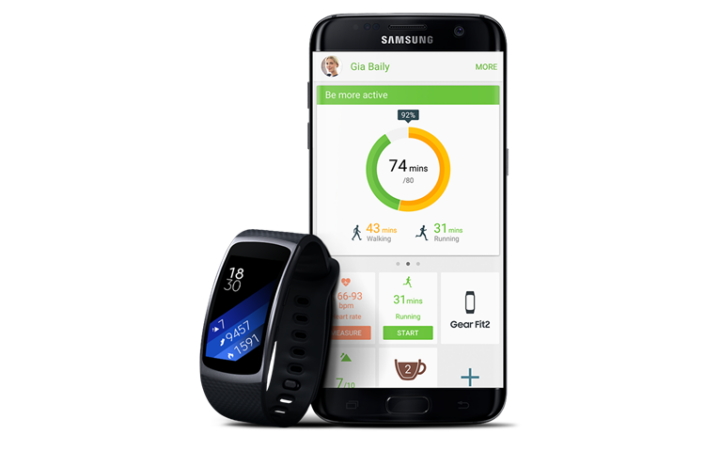 Q. Tell us about the new features of the updated version of S Health, which was released at the launch of the Gear Fit2.

Seongho Cho: It’s common knowledge that exercise is more effective when its intensity varies. So, we loaded an exercise pace function on the Gear Fit2 to enable users to exercise more effectively.

Users can select “Pace” when setting target goals and receive feedback to keep the right pace during their fitness routine. Although this function is available on the mobile version of the app, it’s more effective when used in real time with a sports band.

Also, we added new exercise categories to S Health. The Gear Fit2 can measure a total of 14 standard exercises, such as cycling or Pilates, in addition to various other types of exercises.

Bumsung Cho: Numerous studies have revealed that social elements and competition can spark motivation in sports. Thus, we included functions that let users share their stats on social media, or participate in Together.

Counting steps is the most frequently used function on S Health, and Together lets users compare their step counts to those of their friends. The Steps Challenge is another feature that encourages friendly competition and better health for all involved.

Also, considering the biggest role of S Health is to accurately collect and display data from sensors, we added the “Floor” function to better provide barometer-measured data.

Q. What are some advantages of using S Health specifically with the Gear Fit2?

Bumsung Cho: In short, the Gear Fit2 provides seamless tracking in a way that smartphones can’t. There are times when we are without our phones, but with the Gear Fit2, not a single step goes uncounted.

Sleep monitoring is also possible with the device, making it useful for users who don’t exercise much. It’s particularly useful when one isn’t sleeping well, as it provides a lot of information about one’s quality of sleep, and differences in sleep patterns on weekdays and weekends.