Mangoslab: This C-Lab Spin-off Found the Right People and Gave Them Wings

Yongsoo Jeong was stuck in a dilemma – Should I continue to work at Samsung Electronics or start my own company? Jeong reached out to people who had the same mindset as himself and sought advice.

Jinah Kim, a colleague he previously worked with, remained optimistic even when his current C-Lab project fell through. Sangyeon Kim, a software developer whom Jeong met through a friend, maintained his friendly approach. Hanjun Ko, who had the least idea what he’s signing up for, says he didn’t have a hard time deciding to join Jeong for the spin-off. “When we finished our conversation, I was ready to be a part of the team because of the mindset that he had. I knew that I could work with someone who can think outside of the box.” 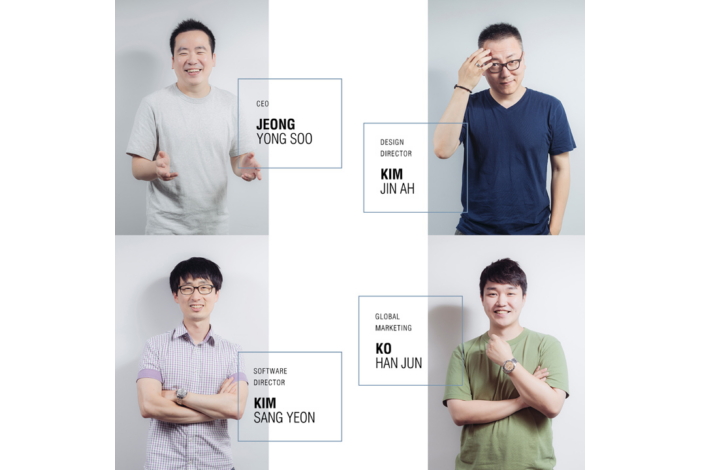 In 2016, Jeong was ready and he took a leap of faith. And so together with Kim, Kim and Ko, he launched Mangoslab from an internal C-Lab project into an independent startup.

Since spinning off from Samsung Electronics, Mangoslab has already built an impressive resume. nemonic, the company’s first product received the CES 2017 Best of Innovation Award in the Computer Accessories category. It also won Grand Prix at the Tokyo International Gift Show Spring 2018. Subsequently, Mangoslab saw its sales rapidly rise, motivating the team to keep their efforts going and growing. 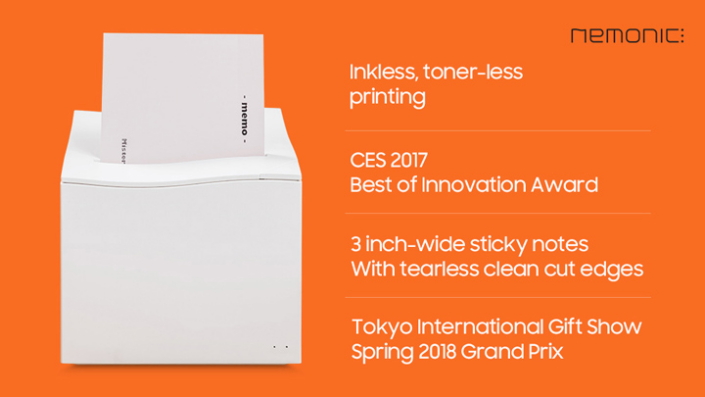 nemonic is off to a great start

Mangoslab’s first flagship product, “nemonic,” is a device that instantly prints three-by-three-inch sticky notes from smartphones and tablets. Jeong and his team mapped out a vision for an evolution of the sticky note to fit the digital age; an experience that would transcend the divide in analogue and digital experiences. nemonic allows users to organize all or part of their ideas and reminders, print it out, attach it where they desire and further scribble on it as the need presents itself.

Building on planning and experience from an idea that was initially started within Samsung Electronics, Mangoslab was determined to bear the torch so many colleagues had toiled for and see the project through. When asked how the company quickly took off in just two years, Jeong said, “We built a team of experts and then trusted them wholeheartedly, focusing on supporting what they are good at.”

Mangoslab believes in the power of people – almost to a fault. “The starting members including myself knew that the spin-off would never make it if we had to do everything by ourselves,” said Jinah Kim, Mangoslab’s Director of Design. “We needed to survive first and in order to lead our spin-off to success, we needed more talent, experts in each respective field, to grow our company.”

Jeong looks back at the rocky recruiting process. “I had years of experience in product development from my years with Samsung Electronics. But I was not at all prepared when issues began to arise during the mass production process. So we sought to hire an expert who had decades of experience in the manufacturing field,” said Jeong. “For Sales and Marketing,” he recalls, “we found a former CEO that had his name all over the job.” The middle-aged manufacturing veteran, in his 50s, took a lot of persuading to work with people decades younger than he. As for the sales-expert-slash-ex-CEO, who was about to go on a multi-year voyage around the world, Jeong went on to literally beg him to push off his planned expedition and join Mangoslab’s cause. 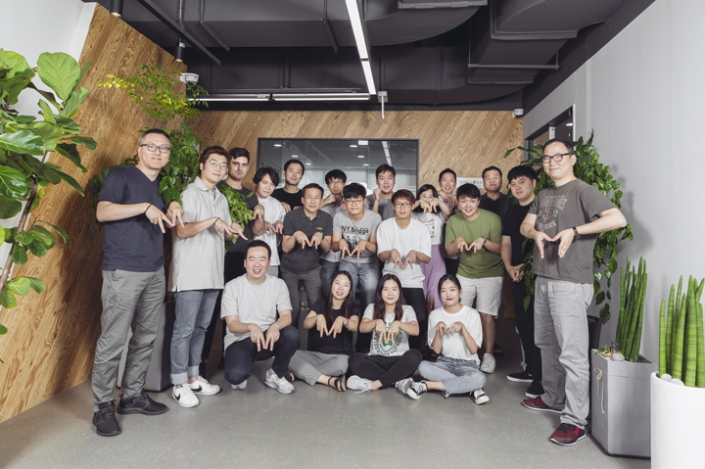 Employees spell out M, for Mangoslab, with their fingers in front of their office in Pangyo, Korea

Other recruits, who were asked to join a startup with not much guarantee, required similar degrees of due diligence. When asked what they’re expected of, Jeong simply says: “Keep doing what you do best.” Today, thanks to Jeong and the company’s continuous efforts, Mangoslab employs 23 members – three additional Samsung Electronics alumni and sixteen ‘external’ recruits – and the company prides itself in having zero dropouts (so far).

Similar to their recruiting philosophy, Mangoslab says they believe in letting their people do their jobs. Each person in a small company is the driving force for their cause and Mangoslab’s leaders are determined to see this idea through.

“I realized that it’s better to let each team make decisions like an individual startup,” says Jeong. “You need to let the managers enjoy what they’re doing. A big part of that is relieving them of bureaucratic processes. So for each team, we have a leader that makes decisions and about four members per team to share the burden and learn from each other.”

For example, nemonic is the only mini-printer in the market with a 3-inch module while competing products use a cost-efficient 2-inch module – the result of a product planner’s market insight; a 21 year-old marketer spearheaded a local awareness campaign on social media – an initiative that may not have made it through layers of bureaucracy many office workers run into; the charismatic director of manufacturing was left free to literally run around the factory in his sleeveless undershirt, solving problems as they sprouted. 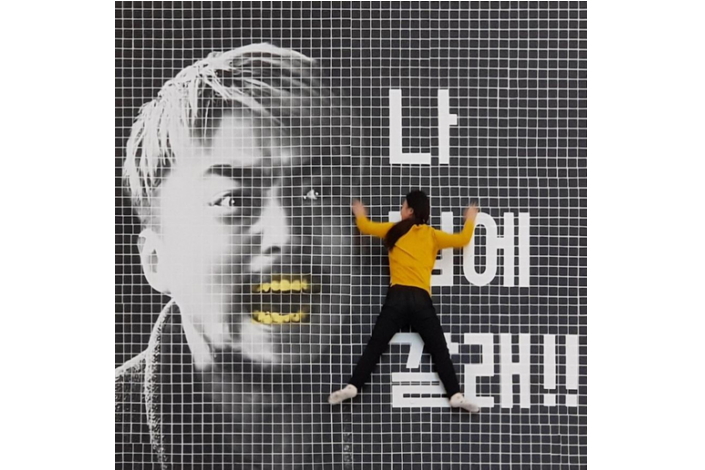 A very successful awareness campaign involved printing out over 2,000 notes on nemonic to put together a mosaic of a popular comedian

The expertise-comes-first philosophy also manifested itself in product design. Mangoslab initially focused on developing a product that is easy to manufacture. But as the experienced designer attested to providing a premium experience, management agreed to changing the design despite the additional components and steps in assembly it would invoke. As a result, nemonic adopted an unprecedentedly high quality automatic cutter that gives you a clean square finish instead of tear-off edges like cash register receipts. It also features a patented technology that straightens the prints so they don’t curl up. 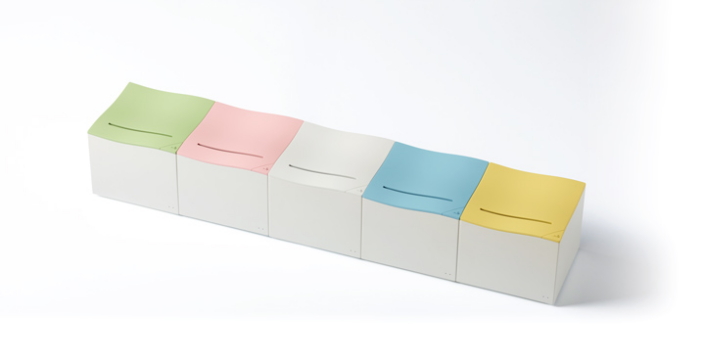 Similarly, the final product features a curvy top rather than a flat square. Jeong trusted the designer’s expertise and decided to go with the design that resembles the shape of swirling paper, reminding the main element that the printer itself symbolizes. Last year, nemonic nabbed the Good Design Award at the Design Intelligence Award ceremony.

Another important pillar in Mangoslab’s philosophy is sincerity. Jeong and his team are fixated on listening to what their loyal customers have to say. Ideas for updates and additional products have sprung from this process.

“A user who was preparing for the National Teacher Certification Exam in Korea left a request on our homepage,” Jinah recalls. “She was using our product to print test questions she got wrong and make notes for future reference. She wanted us to create a dedicated feature for that.” 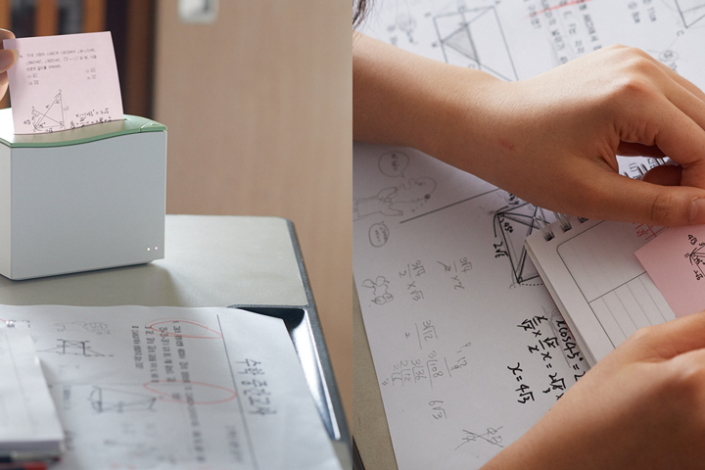 It’s a popular practice in Korea and Japan to keep a record of the wrong answers a student made in standardized tests. This rang a bell for the Mangoslab and they decided to pursue the idea that resulted in a separate app  helping users separate the desired content from the white background and allowing them to print out clear copies of problems from the tests they took.

The software team also found that some users were business owners who wanted to print quick notes, with personalized messages for their customers, to slap on their deliveries. Some café owners used nemonic instead of industrial point-of-sales systems, to instantly print incoming orders for their baristas – notes that can then be stuck on beverage cups to prevent mix-up.

Ultimate Goal: to Spin Off Mangoslab’s Own Startups

While it may sound uncanny for a startup with 23 employees, CEO Yongsoo Jeong stresses that the main goal for his company is to part ways with each other, smiling. The starting members agreed on three major goals when spinning off from Samsung Electronics. The second and third goals are to create products that consumers love from their hearts and to make nemonic a household brand in the mini printer market.

“The first and most important goal is to part ways smiling,” says Jeong. “If our employees want to leave, we want them to do so knowing that they’ve accomplished their share here and are appreciated. Most ideally, I want to commission them with their own businesses – like how Samsung helped me establish my own business. I learned about entrepreneurship with my C-Lab project and wish to bless my employees with the same kind of opportunity.”

This article is the second of a four-part series to celebrate the three-year anniversary of the C-Lab spin-off program. For more information, tap the image below: