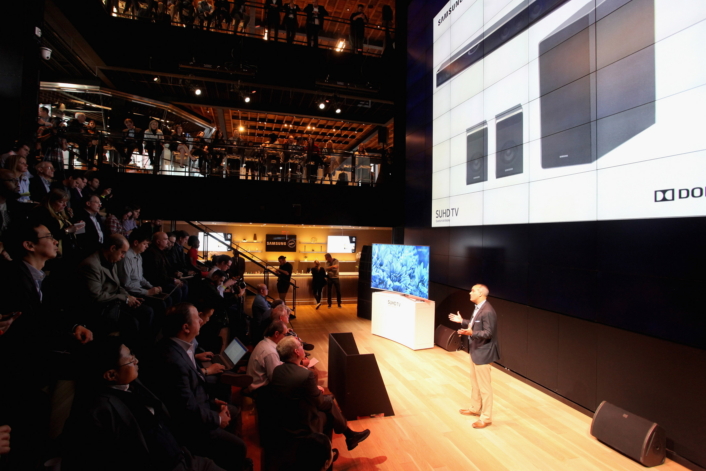 Samsung Electronics America, the leader in home entertainment for over 10 years, announced the availability and pricing for its 2016 line up, including an entirely new Flagship model series – the KS9800, bringing a new meaning to Smart TV.

“Samsung has always been about the ultimate experience in Picture Quality. This year is no different. Our new SUHD models provide the brightest, most realistic color and clarity for every viewing environment,” said Dave Das, Senior Vice President, Samsung Electronics America. “What is new this year is our redefined Smart TV experience. We listened to our customers and made enjoying content the easiest it’s ever been.”

Whether it’s SUHD, UHD or LED, Samsung delivers the brightest, most stunning picture quality, with richer colors and more dynamic audio than ever before.

Samsung’s SUHD TVs feature the world’s only cadmium-free 10 bit Quantum Dot Display, setting the quality standard of 1,000-nit HDR with the best and most vibrant color and contrast available for true-to-life picture and experience. The Ultra Black feature reduces reflections by absorbing light to help provide for deeper, richer blacks. This year’s Samsung SUHD line up meets the UHD-A’s Premium UHD certification program, which ensures consumers are getting the most premium experience from their UHD TV. 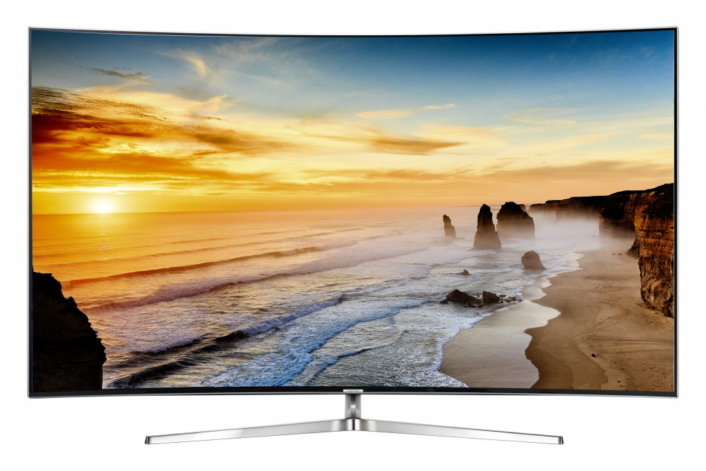 From curved and slim to the new boundless design edge, Samsung offers stunning design with optimum viewing. The new KS9500 features an immersive ‘360’ design that is elegant and looks beautiful from every angle.

Samsung’s 2016 Smart Hub Interface takes simplicity to the next level.  The new Smart Hub Interface eliminates a lengthy setup process by automatically integrating set top boxes from cable providers like Time Warner, Comcast (coming soon), and satellite services such as DIRECTV (coming in June), as well as game consoles. Users can simply plug the STB into any HDMI port, and the TV will recognize the box and provider, as well as automatically set up the remote control to access and control the STB features – not just channel up and down, but DVR controls and other commonly used controls – without the user ever having to program or “teach” the remote. It’s the ultimate in simplicity.

It doesn’t end there. Now users can see and access their favorite content along the Smart Hub menu bar – not just the content provider’s logo, but actual programming. Scrolling across will bring up customized sources including streaming, Blu Ray, gaming, cable, and more, allowing users to “surf content” as though they were channel surfing. In most cases it doesn’t even require a log-in. If a user pauses a streaming program and exits to check the news, when they go back, the program is still right where they left off – no need to log-in and go deep into the app anymore.

Samsung is the leader in providing customers with access to the most premium content. Whether it’s via streaming services, download services or over the air, it’s content at its best. Now Samsung is uniquely positioned to offer UHD HDR content in its purest form – Ultra HD Blu Ray. Customers can connect the K8500 Ultra HD Blu Ray to any SUHD via HDMI and enjoy the latest UHD HDR content from Hollywood Studios such as Fox and Warner Brothers.

For 2016, Samsung offers breathtaking design and unparalleled excellence with its new line of TVs, including a series of five Curved SUHD TVs and a series of five UHD TVs that vary in display size from 49” to 88”. Ranging from the popular curved form to the traditional flat-panel, Samsung provides consumers with sleek appeal, the most exceptional picture quality and smartest TVs.

Samsung’s KS9800 SUHD TV – Delivers unparalleled and improved picture quality, spectacular color, as well as increased brightness and contrast. With the world’s only cadmium-free, 10-bit Quantum Dot display, the new SUHD TV can serve up to one billion colors in detail, delivering the most incredible color expression for the ultimate viewing experience. The smart experience just got smarter with the KS9800 – featuring Samsung’s new Smart Hub, discovering content has become easier and more intuitive than ever with a new simple and fast interface to quickly access everything from live TV to online video, all in one place. The new 2016 Smart Hub allows users to see their favorite content options at a glance by integrating set-top-box and VOD content experiences directly into the TV user interface. The Samsung KS9800 SUHD TV will be available in early June in a 65” model for $4,499, and an 88” model for $19,999. A 78” model will be available in early May for $9,999.

Samsung’s KS9500 Curved SUHD TV – Featuring a modern 360-degree design that is stunning from every angle, the KS9500 is the world’s first bezel-less curved SUHD TV offering an unparalleled blend of form and function. Its Quantum Dot Color and Supreme UHD Dimming dramatically improve color and contrast, enveloping the viewer as its Supreme Motion Rate 240 captures action. The 4K SUHD unlocks up to a billion colors with Quantum Dot technology, so every image appears stunningly authentic for the ultimate viewing experience. Additionally, its revolutionary HDR1000 High Dynamic Range combines vibrant color, powerful brightness, and wider contrast in both the foreground and background to unveil never-before visible details. The smartest of the Smart TVs makes switching from cable to streaming to any other input as easy as changing the channel. Its universal remote can also control your other devices, and with its built-in IoT Hub connected to the SmartThings platform, consumers can control everything from living room lighting to home security without ever leaving the couch. The Samsung KS9500 Curved SUHD TV is available now in a 55” model for $2,499 and a 65” model for $3,699. A 78” model will be available in early June for $7,999.

Samsung’s KS9000 SUHD Flat TV – Discover a viewing experience as breathtaking as it is exhilarating with Quantum Dot Color offering the most lifelike picture yet. The KS9000 SUHD TV’s Supreme UHD Dimming elevates color and contrast, while its Supreme Motion Rate 240 captures action that will leave your heart pounding. And, it’s more than just the Smartest TV with the most innovative and easy-to-use seamless capabilities – its sleek 360 design looks beautiful from back to front, making it a true work of art. Samsung’s KS9000 4K SUHD TV is available now in a 55” model for $2,299, and a 65” model for $3,499. A 75” model will be available in early June for $6,499.

Samsung’s KS8500 SUHD Curved TV – At the summit of television technology is the KS8500 4K SUHD Curved TV with Quantum Dot Color, creating our best picture yet. Its breakthrough HDR1000 High Dynamic Range reveals details the viewer has never before seen, while its Peak Illuminator Pro makes every scene come alive by making shades of color pop. This 4K SUHD has a curved screen with an ultra-slim, minimum bezel, and sleek 360 design that impresses from back to front. Plus, its enhanced seamless Smart TV capabilities make it easy to use as it is beautiful to admire. Samsung’s KS8500 4K SUHD Curved TV is now available now in a 55” model for $1,999 and 65” model for $2,999. A 49” model will be available in May for $1,699. 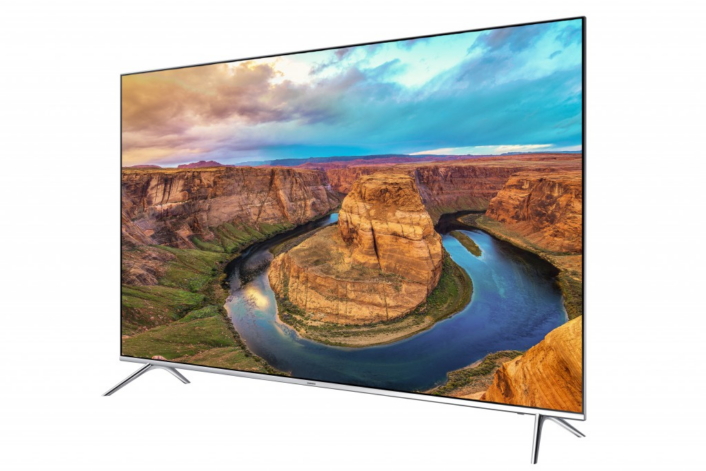 Samsung’s KS8000 SUHD Flat TV– Smart never looked so good. The Samsung KS8000 features Quantum Dot Color, HDR1000 High Dynamic Range and Peak Illuminator Pro to provide the best home entertainment viewing experience. Plus, its Motion Rate 240 puts the viewer on the pulse of every action sequence, while its flat, virtually bezel-less 360 design exudes elegance from every angle. Its smart capabilities are enhanced with the latest innovations and auto-sensing universal control, so its insides are as extraordinary as its outsides. The Samsung KS8000 is now available in a 55” model for $1, 799, and in a 65” model for $2,799. Starting in May, it will be available in a 49” model for $1,499, and a 60” model for $2,299. 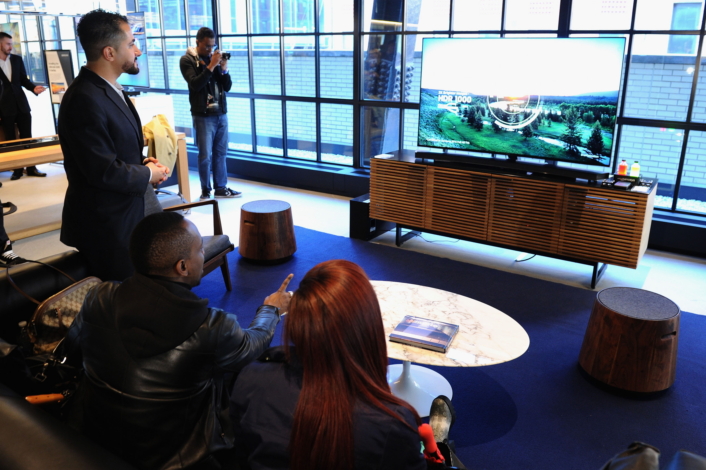