Samsung Electronics, the number one TV manufacturer worldwide for the past 10 years, unveiled its spectacular new line-up of SUHD TVs at CES 2016, ushering in a new decade of global TV leadership.

“Our new SUHD TVs represent our singular focus on innovation that matters most to consumers, by providing the very best picture quality for the home,” said Hyun Suk Kim, President of Visual Display Business at Samsung Electronics. “In 2016, we’re going beyond anything we’ve done before to offer a remarkable synergy of design, engineering and craftsmanship.”

CES attendees can experience Samsung’s 2016 SUHD TVs and the company’s other innovative home entertainment products at booth #11906 in Central Hall.

Samsung’s 2016 SUHD TVs feature the world’s only cadmium-free, 10-bit Quantum dot display, offering the most true-to-life picture quality, with stunning brightness, exceptional contrast and the most lifelike colors ever offered by Samsung.

The vast majority of Americans watch TV with light in the room (86 percent on a typical weekday, 85 percent on weekends) and only a small share say they watch in complete darkness (14 percent on weekdays and 15 percent on weekends), according to a recent consumer survey*. Samsung designed its new SUHD TVs to deliver the optimum viewing experience, regardless of the lighting environment.

With no bezel that normally functions as the border, the viewer’s attention is focused purely on what matters most – captivating content on the screen. In keeping with this design ethos, Samsung has sought to eliminate all unnecessary elements, even removing screws from the rear of the TV, to create an elegant product that is beautiful from every angle.

Built on the Tizen operating system(OS), Samsung’s 2016 Smart TVs make it easier for consumers to discover and access all their favorite content and services, from TV and movies to games and program information, all in one place. 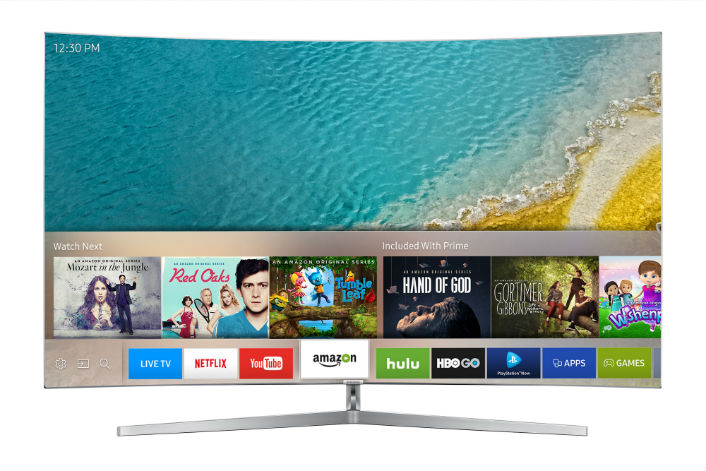 Samsung also unveiled its first Ultra HD Blu-ray Player, the UBD-K8500, which is HDR compatible and offers four times the resolution and 64 times detailed color expression of a conventional Blu-ray player. It features a sleek, curved front design, and is available for pre-order now and for purchase in the U.S. in March 2016.

Samsung has partnered with Hollywood studios to ensure consumers have a selection of Ultra HD Blu-rays with astonishing HDR picture quality. This year, 20th Fox is slated to release more than 100 4K Ultra HD discs with HDR including films like The Martian, Peanuts, and among others.

*The survey was conducted online in GfK’s Omnibus from December 11-13, 2015 using the GfK KnowledgePanel®. The study consisted of a nationally representative sample of 1,020 U.S. adults, selected using random probability address-based sampling. The margin of error for this study is +/-3 percent points.

Samsung Electronics announces GAIA, a Powerful Smart TV Security Solution for 2016 and Beyond