THIS IS QLED TV, Part 7: QLED TV – How Samsung Achieved Dominance in the Premium TV Market

The TV industry is now witnessing an era of fierce rivalry among premium TVs with many companies promoting ultra-large UHD screens, advanced smart TV functions and sleek designs. Despite the competition, Samsung Electronics’ 2017 QLED TV demonstrated strong growth in the second quarter to secure first place in the overall flat-panel TV market, as well as in the above-$$1,500 global premium TV market.

As discussed in an earlier edition of the THIS IS QLED TV series (Part 2), premium TVs worth more than $1,500 account for just five percent of total TV sales, but have a much larger business impact, accounting for 20 percent of sales revenue and 40 percent of profits. 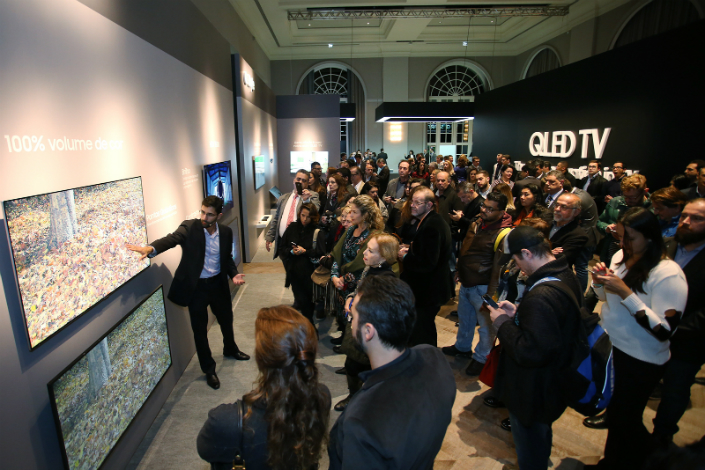 Attendees at a QLED TV launch event in June 2017, in Brazil, take in the display’s immersive visuals.

Samsung Has Over 40% of Market Share in Most Regions

According to Samsung’s own statistics, Samsung TVs maintained their first place standing in the over-$1,500 global premium TV market in the second quarter of 2017, with more than 40 percent of market share by sales volume in all the major global markets, except China, where it was number one but with around 30 percent market share. Samsung’s market share remained above 40 percent in North America and Europe, the major battlegrounds of the global TV market. Samsung TV also recorded approximately 50 percent market share in Central and South America, and a higher percentage than all other competitors combined in the Middle East, CIS, African and Korean markets.

Samsung launched its flagship premium QLED TV in 2017, starting in North America in March. Samsung’s QLED TV, which combines great picture quality and lifestyle design, has led the outstanding performance of Samsung premium TV all over the world. In particular, Samsung’s share in North America’s high-end TV market, including QLED TVs, has increased sharply over the previous quarter. 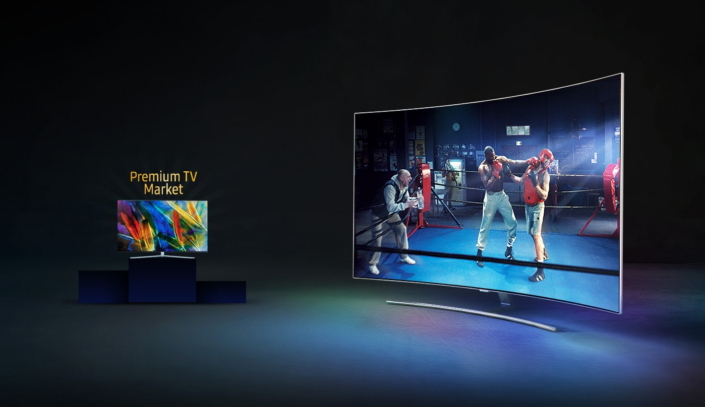 Samsung is pursuing local and global strategies which provide customized services tailored to each region while delighting TV consumers around the world with differentiated benefits. Samsung offers a five-year display warranty and a 10-year burn-in guarantee for all 2017 QLED TV products*. This guarantee period is much longer than the usual TV warranty period of one to two years, and stems from Samsung’s confidence in the display durability of its technology in terms of image retention and burn-in.

Additionally, Samsung has added its new “All Care Protection” function this year in hot and humid regions such as Africa and Southeast Asia. This function goes a step further than the existing “Triple Protect” technology which protects the TV against lightning, moisture and abnormal voltage. All Care Protection further enhances the longevity of Samsung’s TVs by preventing dust and insects from getting inside the set.

Samsung is also providing a Connected TV service in Southwest Asia, including India, which enables users to view photos and videos from their smartphones on a large screen TV even without an internet connection. Another new service is Samsung Family TV 2.0 in China, which allows users to send text messages, photos and emoticons to their parents’ TVs via their smartphones using QQ, the country’s top mobile messenger.

Samsung offers a five-year display warranty and a 10-year burn-in guarantee for each of its 2017 QLED TVs.

Expanding Its Selection of Premium TVs

Samsung offers three types of QLED TVs with the Q7, Q8 and Q9 models that come in different shapes (flat and curved) and sizes ranging from 49 to 88 inches. The company plans to provide an even broader selection to global premium TV consumers by expanding the models available in each product line in the second half of the year.

In addition, Samsung’s “The Frame” has recently come onto the global market, equipped with a unique appearance reminiscent of a picture frame and an artificial intelligence (AI)-based display. Alongside the QLED TV, The Frame is leading Samsung’s growth in the premium TV market. The company will unveil more details about its market-leading premium TVs at the IFA 2017 exhibition starting on September 1, 2017, in Germany.

“As we enter the UHD TV era, consumers are demanding a screen wider than 60 inches and a clearer picture without image retention or burn-in,” said Jong seok Choo, Executive Vice President of the Visual Display Business at Samsung Electronics. “In the second half of this year, we will expand the QLED TV and The Frame product lines to further strengthen our position in the premium TV market, which is the main battlefield in today’s TV market.”

Seeing Samsung’s The Frame hung on a wall begs the question: Is it a work of art or a television?

*Details of the guarantee for 2017 QLED TVs vary by country, and the policy will gradually be introduced to other countries as the QLED TV is launched in each market.