THIS IS QLED TV, Part 3: Optimized for the Typical TV Viewing Environment

While most of the world tunes into their favorite TV shows during the dark evening hours, viewers spend a large amount of time in front of their TV sets in bright environments.

According to the Rensselaer Polytechnic Institute, the average home illuminance (or light) level in the U.S. and European countries is 70 lux in the evening and 125 lux during daytime. The average daily illuminance level in the typical U.S. and European home is about 75 lux, which is the approximate outdoor illuminance level at sunrise. The level is twice as high in Asian countries, including Korea: 175 at night and 250 during the day. 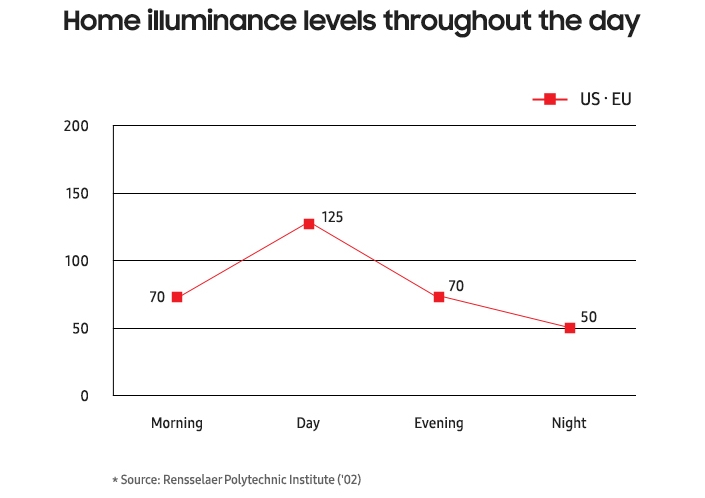 Furthermore, a 2013 study conducted by performance management company Neilsen shows that while TV viewers watch around two hours of TV in the evening between 8PM and 11PM, they also spend more than one-and-a-half hours watching during the daytime hours of 11AM to 3PM.

In other words, people are watching TV in rather bright environments. Therefore, a premium TV should be able to provide the best picture quality in viewing environments where lighting levels are high.

Dark Room Testing Over the Years

In the 1990s, many people used projectors to watch movies. Because projection screens are highly reflective, they lose their contrast if the lights are switched on. So, it was around this time that the TV industry came up with the idea of dark room testing. Since then, a number of product testing laboratories have conducted their TV tests in a completely dark room.

But because many people watch TV not only at night but also during the day, the TV manufacturers of today have been focusing on making products with higher brightness levels so viewers can enjoy clear images, even in bright environments. Meanwhile, High Dynamic Range (HDR), the latest technology designed to improve TV brightness levels, makes the bright parts of the on-screen picture even brighter, allowing the content to be displayed in true-to-life form.

So what kind of TV looks best in bright environments?

When watched in a dark room, OLED TVs are able to display a picture with a high contrast ratio. Why? OLED TVs are self-illuminated and do not need a backlight, which means they can display accurate blacks when the lights are off. But in the typical viewing environment, where lighting conditions are generally bright, the picture quality of the OLED is quite different.

When Samsung tested its premium QLED TV and a competitor’s OLED TV in an environment with a 75-lux illuminance level, the QLED TV had a contrast level that was twice as high as the OLED TV. In other words, in a typical TV viewing environment, the QLED TV displays brighter and deeper colors.

The lighting of the viewing environment significantly affects the TV experience.

Great Reviews, Across the Board

A number of product testing companies have recognized Samsung’s QLED TV as the most optimized television for the average TV viewing environment. which, a leading product evaluation agency in the U.K. that tests TV and AV products, recently named Samsung the “Which? Sound & Vision Brand of the Year 2017” for its QLED TV.

Germany’s highly regarded consumer electronics publication, Video Magazin, awarded Samsung’s QLED TV a rating of 920 on a 1,005-point scale – the highest score it has ever granted. Furthermore, the QLED TV is the first product reviewed by the magazine to receive high marks in all three of its evaluation categories: Innovation, Reference and Highlight. The magazine tests TV products under both bright and dark environments, ranging between 45 to 75 lux.

The 2017 Samsung QLED TV displays optimal picture quality with clear contrast at all times of the day.

With a peak brightness of 1,500 to 2,000 nits, the QLED TV can express 100 percent color volume – a first for any global TV manufacturer. This means that all colors of the DCI-P3 color space can be expressed regardless of differing levels of brightness, ensuring that HDR images can be viewed in the way the content producer intended.

“When it comes to determining a TV’s picture quality, the typical viewing environment must be considered in addition to its other features,” said Moonsoo Kim, Executive Vice President of Visual Display Business at Samsung Electronics. “Samsung will lead the new lifestyle TV era with its QLED TV, which will give every user the best viewing experience, no matter their viewing environment.”