What’s New at Samsung 837X in Decentraland and on Discord? Find out here.

UPDATE as of September 20, 2022: New activations in Samsung 837X and Discord added

It’s time for a week-long celebration of sustainable fashion and tech during Climate Week with Samsung!

At Samsung, recycling and repurposing materials in our products is part of our everyday commitment to sustainability. While you upcycle, we recycle. And since 2012, we’ve collected and recycled 1.2 billion pounds of e-waste in the U.S. That’s like collecting 50 laptops or 500 smartphones every minute![1] Now it’s time to come together and celebrate these actions contributing to a greener world.

From September 19-25th, Samsung will host a variety of events IRL at Samsung 837, at Samsung 837X in Decentraland and on the Samsung U.S. Discord server to recognize the everyday changes that have a meaningful impact on the environment. 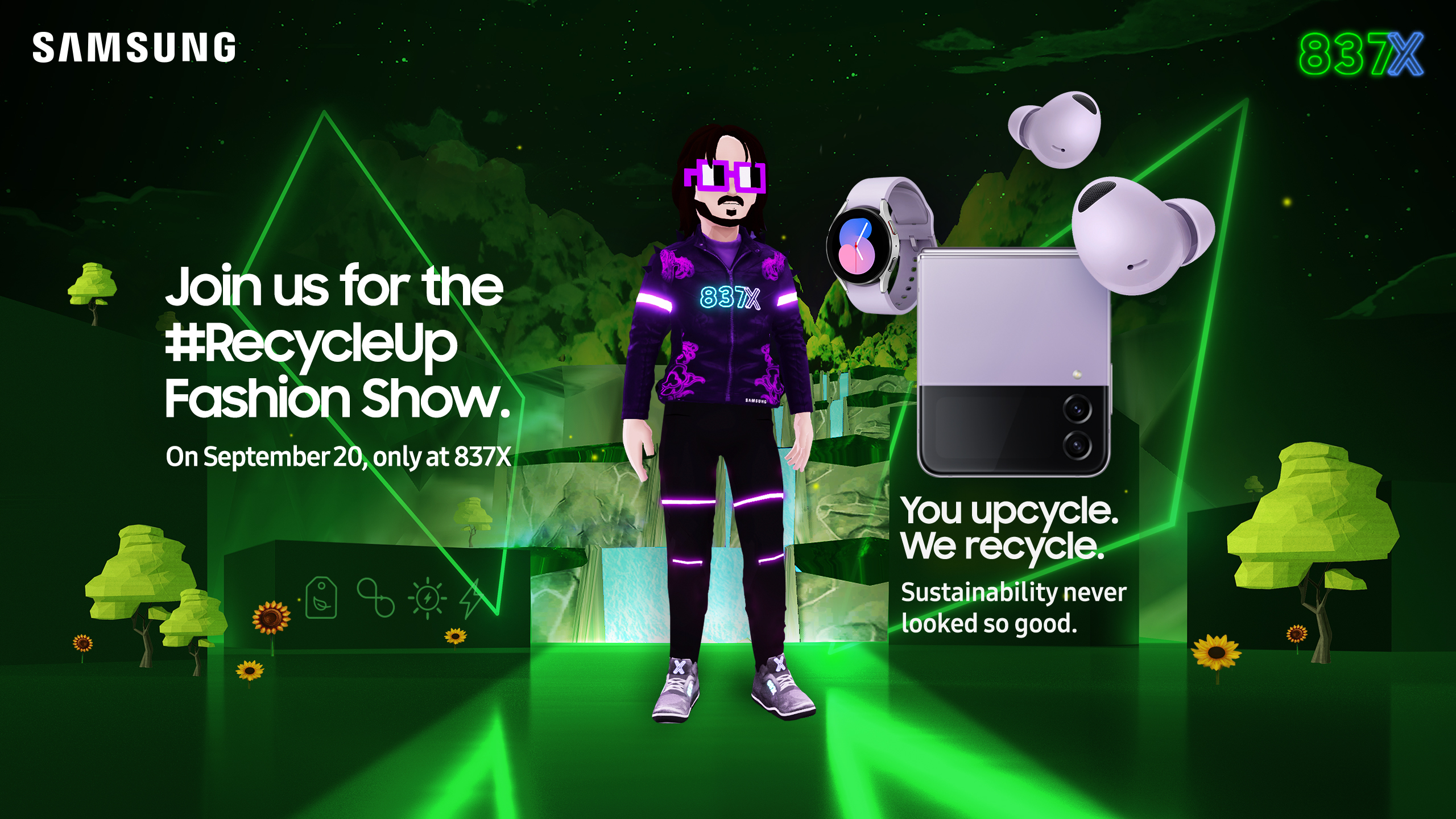 Here’s what you can expect:

To add to the excitement, stay tuned for even more surprises throughout the week to engage with and reward our multiverse community.

We can’t wait to see the hottest upcycling influencers merge with the latest tech in the metaverse and beyond. And don’t forget to connect with other members of our community on TikTok and show off your customized upcycled designs as part of our #RecycleUp challenge![3]

For the more information on Climate Week events, visit Samsung.com.

Check out some of our previous multiverse activations below!

For the first time ever, Samsung’s big quarterly sales event, Discover Samsung, came to Discord starting Monday, September 12th. Since our Samsung 837X launch in Decentraland earlier this year, we’ve been able to connect with users in a whole new way that encourages boundary breaking creativity and self-expression. Now, for the first time, we gave our Discord community the exclusive opportunity to earn non-fungible tokens (NFTs) through a brand new, gamified hunt for clues.

Users began on Samsung’s U.S. Discord server to see which clues were needed to answer three questions, scattered on Discord and Samsung.com. While on Samsung.com, users could curate customized wish lists, and feel great doing it with offers on eco-conscious products. Once the game was complete, users could submit their MetaMask wallet address on Discord for a chance to earn an NFT worth up to $500. The game was open from Monday, September 12th at 10 AM ET to Wednesday, September 14th at 5 PM ET. On Thursday, September 15th, Samsung airdropped the NFTs which had a random value of $0-500. For the first time, winners who received a monetary value NFT were able to redeem it for an eCertificate to shop and save during the Discover Samsung Event.[4] There were a total of 30 winners and $10,000 in prizes, and all participants received an NFT! Then, guests could watch live streamed commerce events at Samsung 837X highlighting wish list products from content creators.

Connect, Collect and Countdown to Samsung Galaxy Unpacked at Samsung 837X in Decentraland (08.08.2022)

Innovation was unlocked and greater possibilities than ever before were unveiled at this year’s Samsung Galaxy Unpacked. Building on the epic event, fans participated in the first-ever Samsung.com scavenger hunt and entered raffles to win limited edition wearables or even Samsung products!

On August 10th at 9:00 AM ET, fans joined an Unpacked watch party at Samsung 837X, as the Connectivity Theater and digital billboard tower broadcasted a livestream of the event, including a sneak peak of Samsung’s latest collaboration with BTS. 1,000 lucky audience members were entered in a raffle[5] to win a limited edition wearable. Following the livestream, guests visited the Samsung US Discord server and embarked on an all-new scavenger hunt on Samsung.com. For only 48-hours, users unpacked the mystery and followed various clues to learn more about the Unpacked innovations. With each clue revealed, participants were one step closer to the possibility of winning one of three Samsung product prizes. The winner was revealed the following week.

Users headed over to Samsung 837X on August 10th for a $200 Reserve Credit[6] toward pre-orders, and returned on August 13th with new wearables for another special music event.

In true Samsung fashion, we raised the bar for customization and innovation at 837/NEXT by introducing a next-level, new experience that activated our communities across Samsung 837X in Decentraland, Samsung 837 in New York City and the Samsung US server in Discord.

On 8:37 AM EDT, Samsung fans cultivated a massive Non-Fungible Token (NFT) masterpiece created across channels in partnership with Nouns, an open-source generative art project designed to improve on-chain avatar communities. Participants expressed themselves through their custom Noun avatars that were the building blocks of the larger NFT mosaic. To create this masterpiece representing our multiverse community, Samsung partnered with So Youn Lee, a Korean contemporary artist based in Los Angeles, whose work is known for its “ethereal, dream-like aesthetic with explosions of colors and random textures.”

Guests at Samsung 837X emoted to create their Nouns, while visitors at 837 used on-site Galaxy products to contribute—all for the chance to win rare 837/NEXT wearables. Guests coming from Discord to 837X also had a chance to win special prizes. Contributors had a chance to own the finished NFT mosaic, as well as a Samsung 837/NEXT participation badge. A few lucky winners were able to show-off ultra-rare prizes – with 10,000 participants receiving a pair of Nouns glasses, 10 winning an 837/NEXT artist’s jumpsuit wearable and only one winner receiving the ultra-rare Golden Glasses.

Samsung invited members of the Web 3.0 community to participate in an entirely new form of self-expression at 837/NEXT during NFT.NYC. To celebrate and cultivate a community of pioneers in this space, we hosted daily events at our flagship Samsung 837 location in New York City, as well as in the metaverse at Samsung 837X and on our newly introduced Discord server. From Monday, June 6, through Thursday, June 23, Samsung 837 was home to many different events designed to connect creators and push the boundaries of innovation each day. There was also a brand new quest that bridged the gap between the physical and virtual worlds in Samsung 837X and at Samsung 837 in NYC.

Samsung is continuing taking a multiverse approach to create epic consumer experiences around its strategic pillars – sustainability, customization, and connectivity – in the metaverse space, including Decentraland, Roblox and most recently, Discord. These virtual playgrounds have allowed us to engage with our community in new ways, while educating fans on our approach to sustainable, customizable and connected innovation.

Samsung took its sustainability story to the skies and whisked guests off their feet in celebration of its Earth Month in Samsung 837X. On April 29 at 8:37 PM ET, visitors in Samsung 837X were greeted with an all-new sustainability-focused quest and the chance to win an ultra-rare Earth Month wearable. Upon entering this digital world, users were asked to ride four hot air balloons, each showcasing Samsung’s environmental progress with the opportunity to earn different sustainability badges.

Users then returned to the 837X roof and received a badge entering them in an exciting wearable raffle. Guests could continue exploring the external space of Samsung’s metaverse and learn about the company’s sustainability initiatives for an additional chance to claim one of the 10 epic collection exclusive Earth Month wearables raffled alongside 100 tree wearables.

Later, guests were welcomed to join a celebration on April 30 beginning at 6:00 PM EDT. AY Young, musician, entertainer, and United Nations advocate for global energy sustainability, took the stage at Samsung 837 in New York City and was exclusively streamed to Samsung 837X for fans to enjoy. The concert was a part of AY’s Battery Tour, powered by 100% renewable energy and designed to positively impact communities and build a better, more sustainable future together.

On March 21, 2022, at 8:37 PM EDT, 837X visitors took the lead and curated personal experiences with an all-new customization-focused quest called You make it. As a creative hub that transcends the digital and physical, 837X was home to this one-of-a-kind “choose your own journey” quest. The You make it quest was inspired by all of the ways Samsung empowers people to express their unique style, raising the bar for personalization and choice. Fans were greeted by a completely redesigned 837X interior, filled with vibrant colors, new worlds to explore, characters to interact with and prizes to win.

Greeted by three mystical characters embodying the design, flexibility and connectivity of Samsung’s customizable technology, fans explored patterns and colors of the sea, traveled through a jungle temple and climbed mountain islands alongside each character. Down each path, visitors began curating their own special non-fungible token (NFT) art, personalized and designed based on their decisions along the way. All participants who completed the quest unlocked ways to earn You make it NFT badges to add to their growing 837X collection. The first 20,000 people to successfully complete the quest received their own special one-of-one creation to be revealed the week of March 28. Then, people were able to share or display the collectible art pieces to commemorate their adventure within the metaverse.

On February 9 at 10 AM ET, fans watched Galaxy Unpacked live in the Connectivity Theater for the first time ever in the metaverse. Then, from the 837X lobby, a new character guided players on how to begin the scavenger hunt quest to highlight the everyday changes we can make to have a meaningful impact on the environment. In and around the building, visitors searched for up to 10 recyclable product boxes to be upcycled into something magical. When finished, players received a seed to plant a tree in the Sustainability Forest and earned a special Non-Fungible Token (NFT) badge. They were able to return on February 14 – Valentine’s Day – to finish the quest and get their unique wearable by showing love for the forest. There were more surprises along the way, including a hunt for another exclusive NFT badge.

Samsung 837X’s initial launch in January at CES 2022 drew 52,000 unique visitors in just two days – one of the most ever for a Decentraland experience. Players wowed us by collecting 149,000 NFT badges at launch, with more than 90% of visitors claiming at least one badge and the majority of which claiming all four. The new quest was a tribute to Samsung fans who made the debut a success. 837X is just another way Samsung offers people next-level experiences and connects with them where technology and culture collide.

On January 6 at 8:37 AM ET, Samsung Electronics America opened the doors to Samsung 837X. Modeled on the physical Samsung 837 flagship location in New York City, Samsung’s new metaverse experience brought its spirit as an experiential playground for people to discover the amazing possibilities when technology and culture collide.

Samsung 837X debuted in Decentraland, a blockchain-powered metaverse, and it was one of the largest brand land takeovers in Decentraland. Fans embarked on a digital adventure through the Connectivity Theater and Sustainability Forest and completed quests along the way for 837X Non-Fungible Token (NFT) badges before joining a celebration at the Customization Stage.

The Connectivity Theater livestreamed Samsung’s news from the CES stage as visitors were immersed in the seamless connectivity and customized solutions powered by Samsung technology. As guests ventured into the Sustainability Forest, they were welcomed into a portal filled with millions of trees – and even had a mythic encounter. To celebrate the debut of 837X, visitors were invited to our first-ever metaverse mixed reality live dance party hosted by brilliant producer, DJ and Vibraphonist, Gamma Vibes, from the physical Samsung 837 location. 837X NFT badge holders were entered into a raffle to win one of three limited-supply wearable collections from Epic to Mythic levels for their Decentraland avatar. Winners were announced at 8:37 PM ET on January 7, 2022, to kick off the memorable metaverse performance. 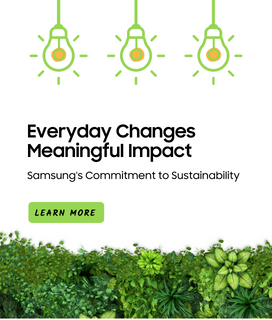