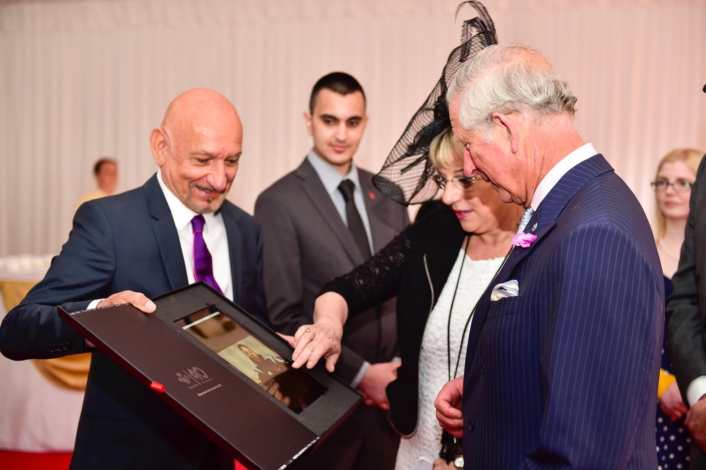 His Royal Highness The Prince of Wales was today joined by Dame Joan Collins and Prince’s Trust Ambassadors, including Sir Ben Kingsley, Fearne Cotton and Pixie Lott, at a garden party for more than 5000 of the charity’s supporters and beneficiaries at Buckingham Palace.

To mark the 40th anniversary of The Prince’s Trust, the event included the unveiling of a portrait of His Royal Highness, made from hundreds of images of people whose lives have been touched by the work of his Trust.

The portrait, created by Welsh artist Nathan Wyburn, was presented by Dame Joan, who is an Ambassador of The Trust. The artwork includes photos of some of the young people the charity has supported, fundraisers, volunteers, partners and members of the public who have taken part in some of The Trust’s events over the years.

Sir Ben Kingsley, who has been an Ambassador for The Prince’s Trust for almost 20 years, then presented His Royal Highness with a Digital Book of Memories, a tablet containing photos and memories recorded by young people and supporters of The Prince’s Trust. The memories were gathered from people who are a part of The Trust’s 40 year history during the #partofPT Tour, a nationwide roadshow which took place in the lead up to the garden party.

Some of the memories and pictures included in the Digital Book of Memories, which was developed with support from The Trust’s technology partner Samsung1, are showcased on The Prince’s Trust’s #partofPT website.

In its 40th year, The Trust is calling on people to share stories and images about their involvement with the youth charity on Twitter and Instagram using the hashtag #partofPT.

Phoebe Young, who was helped by The Trust, was among the young people who met His Royal Highness when the portrait and Digital Book of Memories were presented to him at the garden party.

Phoebe suffered from a health condition from the age of three that resulted in a severe tremor and epileptic seizures, which meant her school days were dominated by bullying, feelings of uselessness and left her struggling to identify with people her own age. Her health, confidence and self-esteem barriers meant that she had no idea what to do with her life.

Phoebe said: “It was amazing to be able to thank The Prince in person for founding such an amazing charity and for believing in young people like me. Life could not be more different for me now since I got involved with The Prince’s Trust – I’m doing a job I love and my confidence has shot up. I’m even giving talks in front of large groups of people which is something I couldn’t have done before, and it’s all thanks to the help I received from The Trust.”

His Royal Highness was also presented with a bronze bust of himself, which was created by sculptress Frances Segelman. The life-like statue, complete with military attire, was created over four separate sittings with HRH between 2013 and 2015 and will be installed at Prince’s Trust House in London.

More than 825,000 young people have been directly supported by the youth charity since 1976 and thousands more have fundraised, volunteered or worked with The Trust over the years.

1 Since 2012, Samsung has supported The Prince’s Trust to enhance the lives of young people. As the partnership now moves into its fourth year, Samsung is continuing to work closely with The Prince’s Trust to introduce technology initiatives, embedding digital and STEM (Science, Technology, Engineering and Mathematics) skills across its programmes through the installation of Digital Classrooms at its centres.

About The Prince’s Trust

Youth charity The Prince’s Trust helps disadvantaged young people to get their lives on track. Founded by HRH The Prince of Wales in 1976, this year it is celebrating 40 years of supporting 13 to 30 year-olds who are unemployed and those struggling at school and at risk of exclusion.

The Prince’s Trust has supported 825,000 young people in the last 40 years and this year it will support over 100 more each day.

Further information about The Prince’s Trust is available at princes-trust.org.uk or on 0800 842 842.