It all started in Maui, Hawaii, where Yong-guk, was on his honeymoon. As he gazed up at the starry night sky from the observatories, he tried his best to capture the breathtaking view with his professional grade digital camera. But his high-spec device couldn’t do anything beyond what all traditional cameras can do, which was to capture the view that lies in front of the camera lens. As an avid blogger and photographer, he had always desired a camera that could capture an awesome view in its entirety.

“People only ever get to see what is in front of their eyes. But seeing the scene from all directions is a totally new experience,” said Yong-guk Kim, CEO of Linkflow. “It records the sky and the clouds in it; it captures all the little moments you may have missed.” With this value proposition, Samsung Electronics’ C-Lab spin-off Linkflow’s product ‘FITT360’ that is expanding the camera market with its ability to “capture and share moments in 360° true First-Person-View.”

The FITT360 is a completely new product for the camera market – a wearable camera device, in the form of a neck band, that takes 360-degree footage.

“I once took it on a biking trip to shoot a promotion video. It was eye-opening to see how 360-degree footage made the scene look so different even though the surroundings were quite familiar,” said Hae-jeon Shin, marketing head of Linkflow. “It’s a new idea to capture how you blend into your surroundings with your own camera. It’s totally different from taking a selfie.”

Mass production of the FITT360 has already started, and it has been winning global recognition, for example being selected as a CES 2018 Innovation Award Honoree in the Digital Imaging & Photography category. The FITT360 also gathered eight times more funding than the team’s initial goal of $50,000 on Kickstarter.

Securing New Opportunities in the Market

After meeting various potential buyers at CES, the Linkflow Team saw an opportunity in the B2B market and came up with an upgraded product – FITT360 SECURITY. “Security companies from all over the world were excited about our product,” said Yong-guk. “It was like nothing they had ever seen before, yet it was clearly a great fit for their jobs. No other body cam out there could record a 360-degrees view, and instantly transmit clips.” Shin added, “We were even asked to sell samples of the first iteration when we participated in security exhibitions in London and Las Vegas.”

While fate has led Linkflow to first focus on B2B – namely, the security industry – it continues to seek further opportunity in the customer end. FITT360 has potential applications as a personal security device. It can be used to record extreme sports. But above of all, the team holds high hopes on the growing need from content creators such as YouTubers.

“The product is ideal. You can simply swing it around your neck while you pursue outdoor activities and hobbies, even when paragliding or surfing. The fact is that these contents exist today, but YouTubers and bloggers are burdened with bulky filming equipment,” the CEO explained.

The Trials that Tempered the Team

With the enthusiasm that FITT360 SECURITY has received in the B2B world and Linkflow’s ongoing pursuits in the consumer sector, it’s clear that the spin-off and the team have come a long way. However, as a growing venture, the team recounts the trials they’ve overcome together to stay passionate and ambitious. “It wasn’t all just rainbows and butterflies,” says Kim as he describes the countless disappointments he encountered in the search for Linkflow’s first partnerships.

“Once we left the cradle of Samsung, we were essentially nobody. Initially, there wasn’t a single company – investor or supplier – that was willing to work with us,” Kim recalled. “Some wouldn’t even talk to us as they didn’t feel that we were worthy of their time. We barely managed to gather the parts needed for our product.” 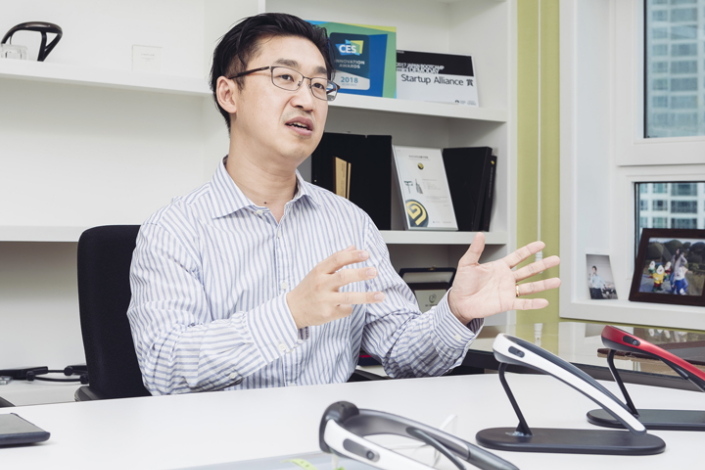 “There comes a moment of Zen when rejections don’t bother you anymore,” says Yong-guk Kim, CEO of Linkflow, as he recalls his journey to find the right partners

Even when Linkflow earned opportunities to present their business, it was hard to sway their dubious and skeptical attitudes. Sometimes they just don’t focus, Kim said. “I once gave an entire 10-minute presentation for a potential customer, only to hear him ask back, ‘So, is this a camera?’”

“At first it’s very depressing,” Kim recalled. “You tell yourself ‘it’s just business’ but rejection after rejection, your confidence just drops. Then comes defiance – it’s like ‘let’s see who smiles at the end.’ After even that comes a state of Zen. You just keep going until you get a result.”

Though they only got their first funding in their umpteenth meeting and partners in other business aspects were just as difficult to come by, the emotional roller coaster ride resulted in success and Linkflow has found its share of partners. Kim says that the experience made the team a bit wiser: “You grow a feel for whom to contact. Larger companies have various divisions that look after different parts of their businesses and you have to ask yourself: ‘who would need our technology the most?’ For us, managers of technology partnerships proved most fruitful.”

Developing as a Work-in-progress

Ever since its C-Lab days, Linkflow was confident in their unique product concept. But their source of pride was also the reason that made the process difficult. “We didn’t have anything to reference, or anyone to ask for advice,” said Junse Kim, head of product design, Linkflow. “We took the trial-and-error approach. We would quickly build a prototype, dog-food it, collect feedback and improve the device – again and again.”

“Many companies miss the opportunity to share their product concepts because they focus too much on polishing their devices,” Yong-guk points out. “Of course it’s important to provide quality products but as a start-up, you want to make sure your product is relevant. And the surest way to ensure that is to ask the final judge of it all – your customers. Timing – when to show the world what you want to do – is key.” 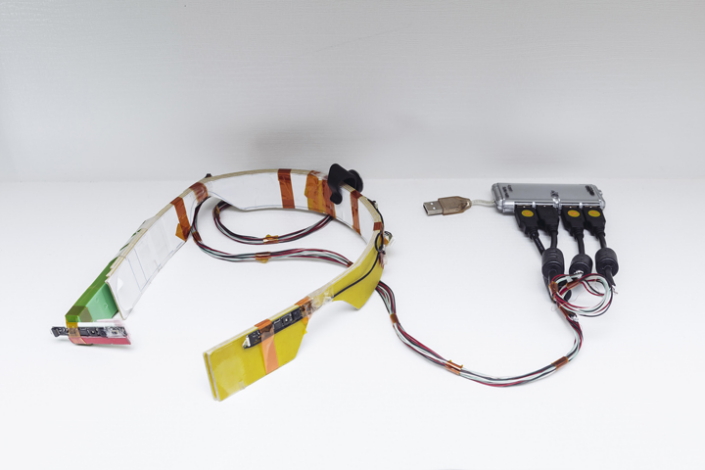 FITT360 actually started out as a head band the sat on the ears, but was eventually modified to a neck band as a result of such trial-and-error. Part of the reason was for functionality – good height and stability. Sitting on the neck, the cameras can capture the surroundings from an optimal view – very close to eye-level. It is also less susceptible to motion and vibration as the neck and shoulders move much less than the head.

Another part was to prevent it from offending other people. A device that resembles the form of a pair of glasses or an earphone could seem like a surveillance device and people could get the impression that they are being watched – they don’t like that at all.

Even after settling on the neck band form factor, the FITT360 went through numerous modifications based on various user feedback. “One example? Detachable cameras and battery,” said Junse. “It made sense after we heard the thoughts but was something we didn’t consider enough in the first three iterations.”

The enormous amount of suggestions Linkflow still receives are almost overwhelming. “Some policemen asked us to add a siren and flashlight, while military officers asked for a heart rate sensor that can read and share vital signals in real-time,” said Junse. “Since those businesses are mostly B2B, we are considering on creating custom models to meet each group’s specific needs. Besides, policemen, firemen, security guards… their uniforms are all different – buttons, shoulder boards, collars, measurements and all – so we need to customize the neck band designs anyway.”

Linkflow believes that this kind of flexibility will help them continue to grow.

Many start-up businesses decide that survival is enough and seek to maintain status quo once they see a stable business. “Instead, you have to push further,” says Yong-guk. “Samsung’s C-Lab initiative encourages you to keep digging for new ideas and that, I think, is what got us to where we are.” And that is what Linkflow plans to continue to do.

“Competitors can copy the shell of our product but they don’t know how and why we changed each nook and cranny of FITT360 – and details matter,” stresses Yong-guk. “Coming from Samsung, we plan to adopt the same rapid-development strategy you can see in Samsung’s products. We start preparing the next-generation model right after mass production hits, so that by the time your competitors offer something similar, we’re already unveiling the upgraded version and providing the previous one at a better price.” Linkflow believes that better technologies and new ideas will continue to give them the edge and that will help catapult them to the top of the industry. 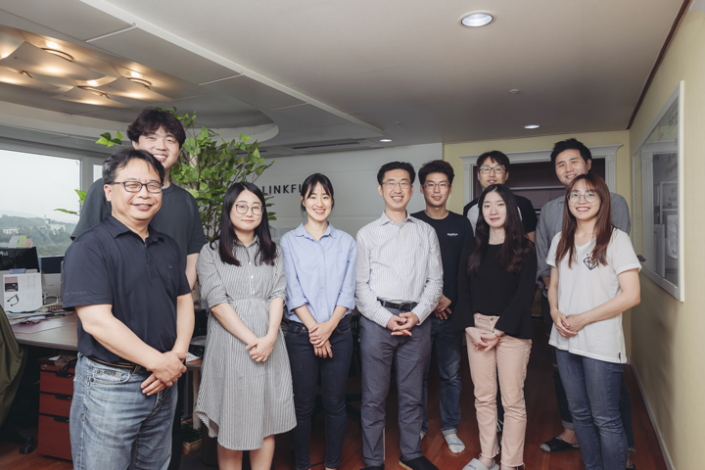 When first starting the company, Yong-guk Kim asked himself: ‘Will there be another opportunity for me to run a company?’ It was then he decided that he’d do his absolute best to make sure he builds a company that employees enjoy working for

The ultimate goal is to go beyond 360-degree cameras and become a household brand in the content creation industry. “C-Lab provides a strong and systematic support network that helps lay down the foundations and goals of running a business. That’s why we were able to continue to pull through and continue to push further.”

This article is the fourth of a four-part series to celebrate the three-year anniversary of the C-Lab spin-off program. For more information, tap the image below: