This article is the second of our stories about the Series 9 laptop. We were able to continue our discussion with some members of the Samsung design team about the evolution of Series 9 from 2011 to 2012.

Q. How was the design concept and process of conception of Series 9?

Hong The design concept was focused on the ‘natural beauty of minerals.’ We tried to maintain the natural elegance and solidity while making it as stylish as humanly possible.

If the 2011 Series 9 focused on the lightness and thinness, this year’s Series 9 emphasized the solid yet smooth curves.

We literally looked all over the world for inspiration, travelling through exhibitions worldwide from Japan to Europe. The continued pre-survey and resource preparations provided the opportunity for the turning point. For the past year, we worked as a TF (Taskforce, which is a temporary organization for an assigned project) at Samsung’s Value Innovation Program (VIP) Center. There, we mediated differences in opinions through countless meetings. 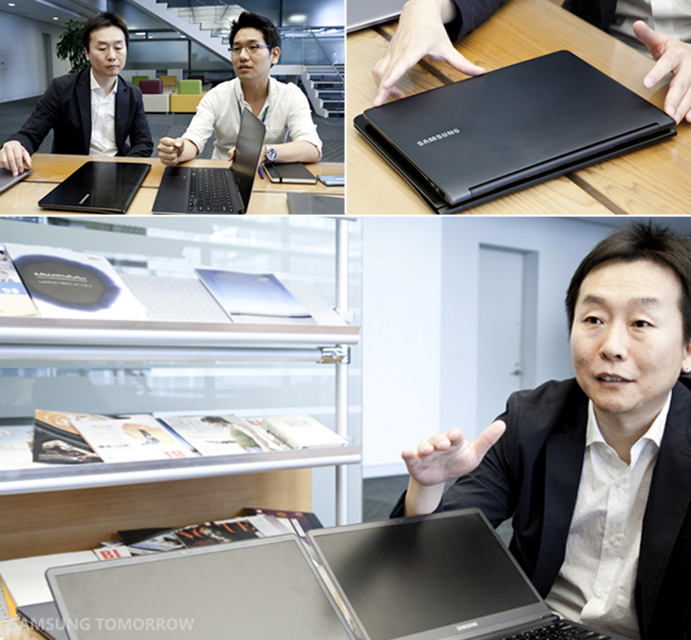 Series 9 was already really thin and light. For a 13.3inch laptop, the thinness of 12.9mm and unique streamlined design are its strengths. As for the LCD, which supports a high-resolution of 1600 X 900, a super-slim bezel has been applied to enhance the immersion into the screen and emphasize the luxuriousness. The thinner bezel helpoed reduce the overall footprint of the product to improve mobility. Applying Single Shell Body technology, where the laptop case is carved out of a single mass without any joints, also played a key role in improving durability as well as portability.

Color, aside from the form itself, was also a key factor in actualizing the natural color of minerals. New color chips were applied and we came up with a new exotic color called Mineral Ash Black. This is a very subtle color, and thus was a lot more difficult to express than a simple black or silver. It couldn’t be too black, too blue, too dark or too light. 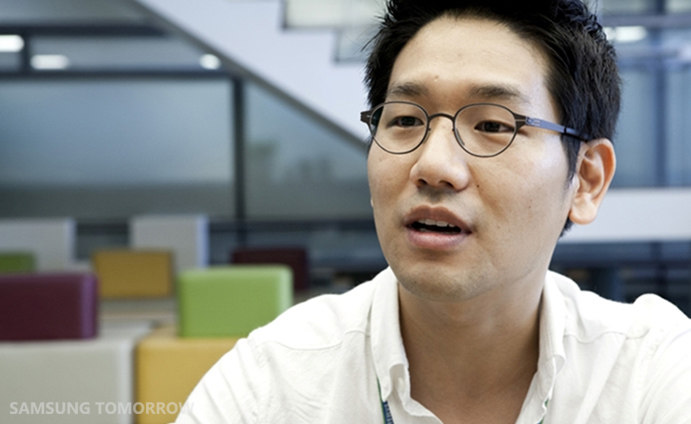 Identity of Samsung, and evolution

Q. There must have been much difficulty to bring that subtle color to life. What was the reason that such special measures had to be taken?

Yoon The Samsung brand has a definite identity. This is true for Samsung laptops too, and the biggest objective is to achieve a consistent originality over the entire lineup while making sure it’s special enough to make a great impact. Though this product is thinner and more compact than the 2011 version, and we wanted to emphasize that evolution.

Q. Are there any examples of the design identity for Samsung Laptops?

Yoon I wouldn’t like to get too philosophical today, but there actually are quite a few simple examples. For one, Samsung began to alter the logo position on its laptops to the middle right since the second half of 2010. This was to maximize brand exposure when using it or carrying it, and deliver the luxurious image of Samsung. Of course you’d need to be very proud and confident of your brand to make users want to show the brand off more and more. We also try to be consistent about the keyboard layout as much as possible. This way, users can feel familiar even if they replaced their old Samsung laptop for a new one. You know, where the Shift, Function, Control, arrow keys are and how big the spacebar and Enter keys are, etc.

Q. You said evolution – what is the distinction from the existing product?

Kim All Samsung laptops have the same identity, but 2012 Series 9 has its own distinction, and that is the premium lifestyle. It is the improved value as a luxury laptop to satisfy the sensibility and usability that premium customers want. This is why we expressed the refined solidity of minerals, with a color that gives one confidence about the solidity of the product while glistening differently from different angles. 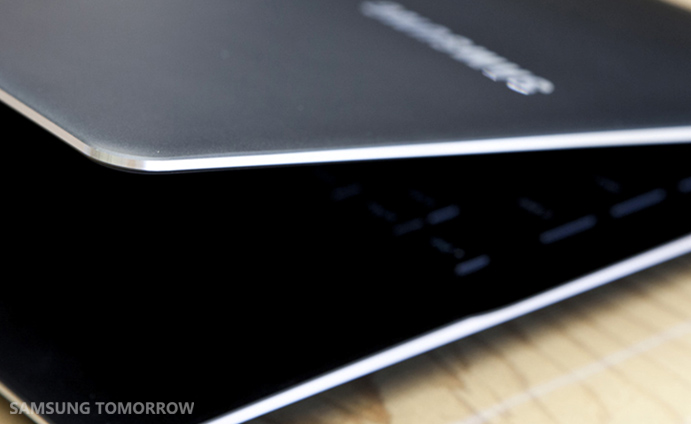 Additionally, we applied a diamond cutting technique to the sides and the touchpad to capture the slimness. The device team said it was difficult to make the border in the same slim thickness, and proposed the thickness near the touchpad to be 0.8mm. But it just didn’t seem right that thick, and we were finally able to convince the device team to go with the stylish design, a 0.4mm diamond cut around the edges of the touchpad. On the sides too, we created a flow of the USB port, HDMI port, earphone port, and charging port. We put lots of time and effort into development of the processing method in order to apply what had been a thin silver line on the existing Series 9 to a larger area of solid cut aluminum. The result was visual harmony, thanks to the glitter effect produced by the diamond cutting and the luminous mineral ash black color. 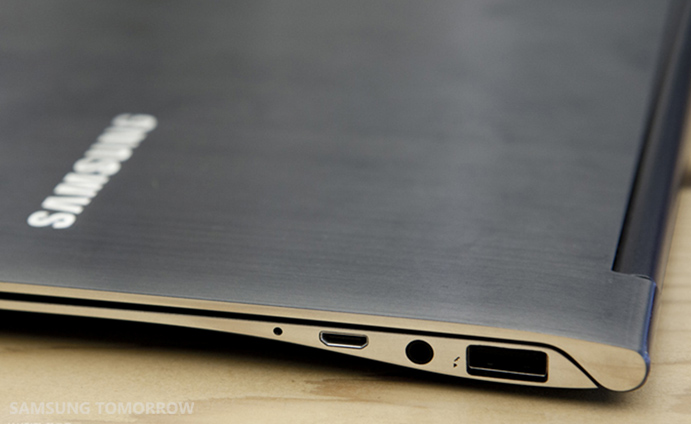 Q. 2012 Series 9 is being well received. What plans do you have in future?

Yoon I think about 90% of the original design was realized, regarding the 2012 Series 9. We had to change a lot of habits and make ambitious challenges, but we bulldozered on. Cooperation with related teams was great, as was desperately needed. This laptop, a masterpiece if you ask me, is the sum of all the hard work engineers, planners, marketers and designers, along with fast and precise decision-making from top management. In the future, design will become even more important. We intend to focus more and more on designs that enhance usability as well as other aspects of user experience. 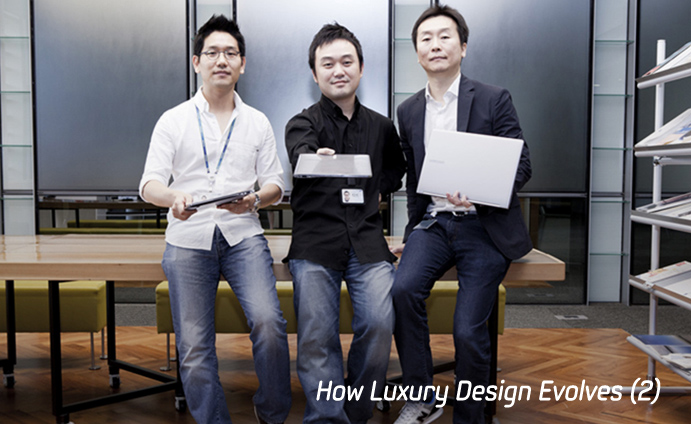 Well, there’s a reason these guys are part of our design team. We’re proud of the Series 9, and we’re very proud of our designers including Designers Yoo, Kim and Hong.