The S Pen is the Note series’ defining feature – a versatile tool whose intuitive design and powerful functions make multitasking a breeze, and allow users to express themselves and connect with others in fun and creative ways. There’s truly nothing else quite like it. 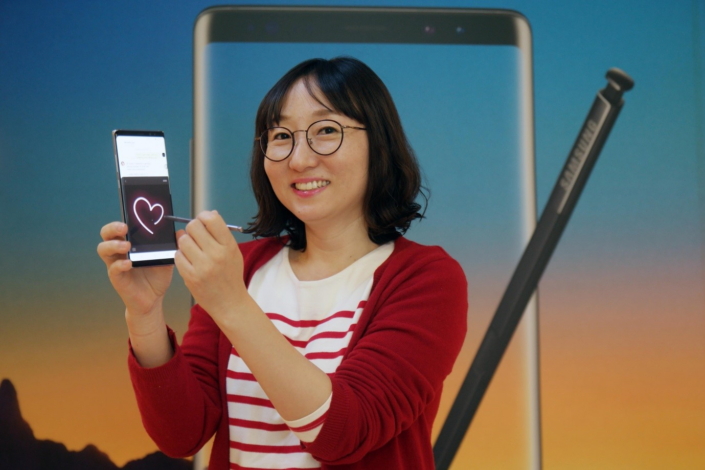 Q. What kind of value does Samsung hope to deliver to consumers with the Galaxy Note8 and the S Pen’s new functions?

We’ve been delighted to hear that consumers who have used the S Pen with the Galaxy Note8 have given it good reviews so far, and remarked on how much better it feels to use the S Pen.

Many of these consumers had not had a chance to experience the S Pen’s convenient functions since the last device debuted. Therefore, when refining the design for the Galaxy Note8’s S Pen, we decided to, rather than upgrading the technology within, focus on adding features that would prove convenient in daily use.

Q. What are some of the processes that Samsung utilizes to identify potential S Pen functions?

In the beginning of each year, we hold a series of “Note Kickoff” meetings, which bring together our Development, Product Planning, UX and Usability teams. Each department is asked to present brand-new ideas for innovative features to include in the new model, and come up with ways to improve upon the previous device based on customer feedback. This is how the Note8’s new S Pen features came about – by diligently listening to our customers’ insights on previous S Pens.

Q. One of these new features, Live Message, has been particularly well received. What were your main focuses when developing it?

Live Message is a fun GIF-creation feature that’s an evolution of sorts of Smart Select, which was introduced with the previous Note device. We wanted to expand this type of functionality because the ability to create GIFs has proven popular among Note users, who are very active on social media. Live Message takes GIF creation a step further by allowing users to add personal touches to messages, via animated text or live emojis, and customize their photos with various pen effects.

Our main focus when developing it was usability. We wanted to make sure that the function would be freely available for users in markets across the world. Because people in different countries communicate via different channels, we worked closely with popular messaging services around the globe, working out conditions and regional restrictions, to build something that would work with them.

We also want to show users how easy it is to utilize the function when communicating with their friends. Our developers are currently working on software updates that will introduce more beautiful and decorative examples of animated GIFs for users who may not be entirely satisfied with their own GIF-creating handiwork to plug into messages. We’re also looking into expanding the selection of pen effects that users have at their disposal.

Q. What are some of the ways that users can utilize the S Pen when using Bixby?

Bixby integration currently allows users to utilize its voice command feature to adjust the type of pen they’re using, as well as its color.

The S Pen’s Bixby support also makes it easier for users to shop. When you’re surfing the web and you find an image of a product that you like, you can activate Bixby Vision via Air Command, hover the S Pen over it, and instantly search for it online.

Q. How did you improve the Screen off memo feature?

Screen off memo is another function that’s receiving positive reviews from users. It automatically activates when you remove the S Pen, and allows you to instantly jot down notes to the off screen. This is a new function that enables users to write even when the screen is off, so that you don’t forget any passing thoughts.

For the Galaxy Note8, we’ve enhanced the feature to deliver new levels of convenience after listening to the consumers’ voices. Whereas before this update, the function was well-suited for simple, temporary memos, now, Screen off memo supports up to 100 pages of notes and allows you to pin notes to the AOD and make edits. This makes the function perfect for taking notes during meetings or presentations, managing to-do lists, or writing quick reminders for important tasks.

Q. Could you elaborate on how collaborating with Wacom has helped Samsung maximize the S Pen’s utility?

Our collaboration with (pen display, tablet and stylus manufacturer) Wacom, incorporating its tablet technologies into mobile devices through the S Pen, has been excellent – a win-win. Although other mobile-device manufacturers could design a smartphone with a large screen, by introducing Wacom’s solutions to the mobile realm, we’ve been able to establish a new standard when it comes to productivity.

Q. What motivates Samsung to constantly seek out new ways to innovate with the S Pen?

The S Pen is a feature that’s unique to our company. We often hear that Note users are very loyal, and I would like to add that we developers are also greatly committed to our work. Those of us who work on the Note devices take great pride in providing users with an S Pen experience that allows them to streamline how they work, live, and express themselves.

This desire to arm users with a tool that makes a difference in their daily lives is what motivates us to identify new and exciting S Pen innovations.